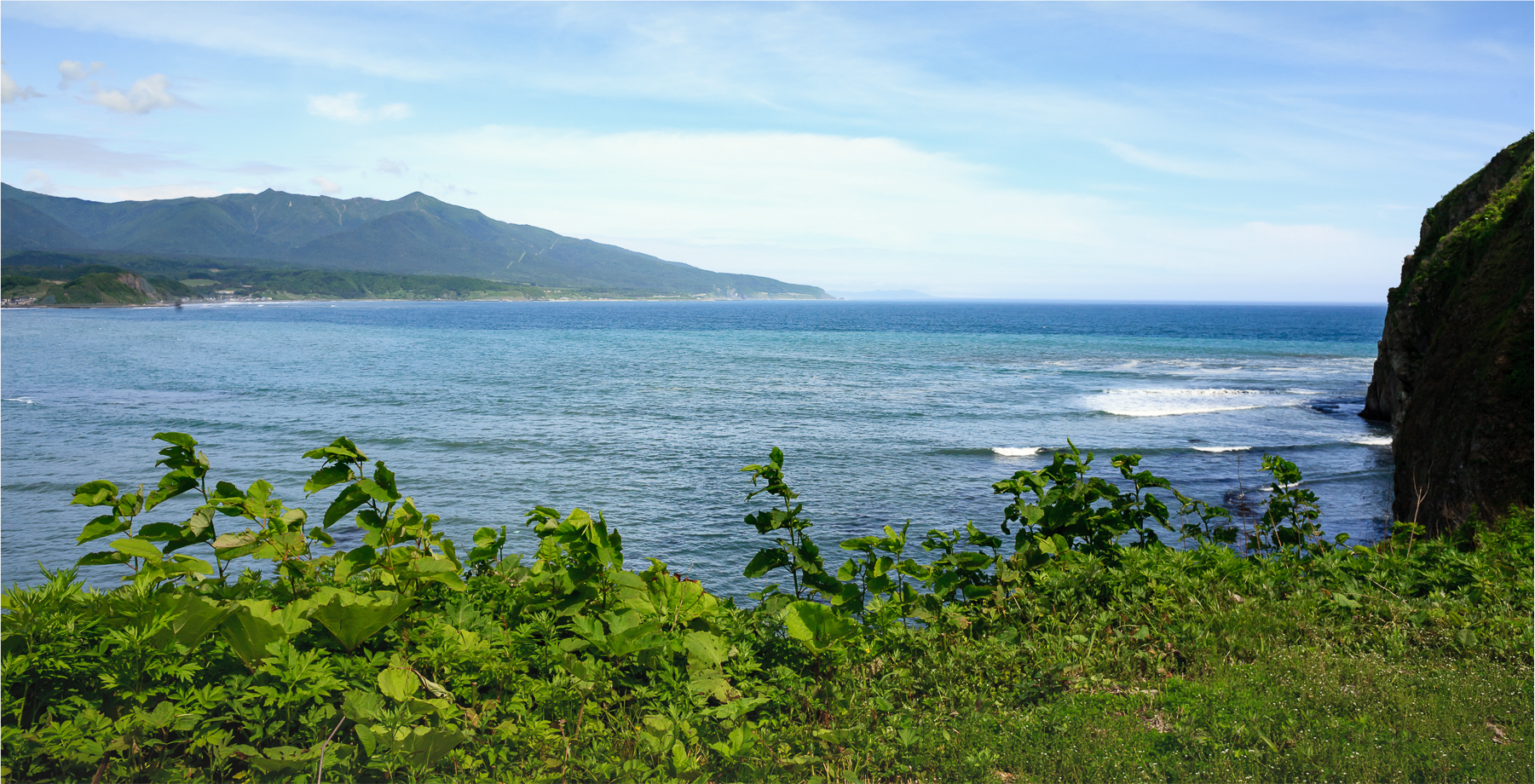 A view of Mt. Apoi from Cape Enrumu.

Approximately 80% of the globe’s volume is made up of peridotite rock. The normally invisible world created by this green rock deep underground can be experienced here at Mt. Apoi.

Mt. Apoi is 810 m high. Although it is not a high mountain, it is famous for alpine vegetation, and for being relatively easy to climb. The route from the trailhead to the mountain hut at Level 5 passes through a mixed forest of conifers and broad-leafed trees. This is the most northerly (and most easterly) vegetation on Mt. Apoi; normally, vegetation coexists in higher places. 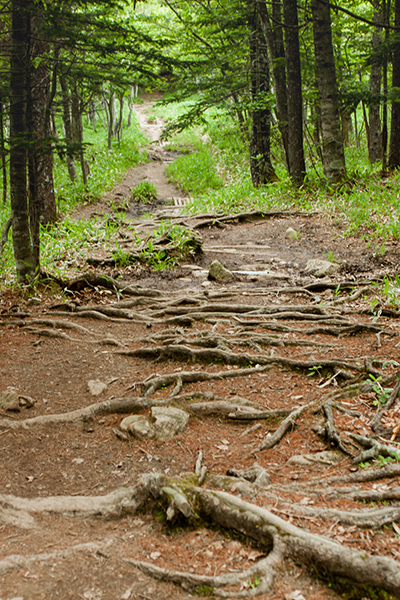 Peridotite does not turn into soil easily; the soil is shallow and the roots cannot grow deep.

When we arrived at Level 5 (approx. 350 m), the scenery changed. Ahead of us was a world of rocks as far as the eye could see. Below us, the town of Samani and the sea. This is the upper limit of the forest. Normally, you would have to go higher to find the upper limits of the forests, but this mountain is different. Siberian dwarf pines grow as if crawling over the earth’s surface, and endemic alpine plants flower among the rocks.
According to Masato Tanaka, a curator at the Visitor Center, “A long time ago there was little greenery and many rocks – an environment favored by alpine plants. But recently, dwarf pines have started to cover the area. Maybe global warming is the cause.” 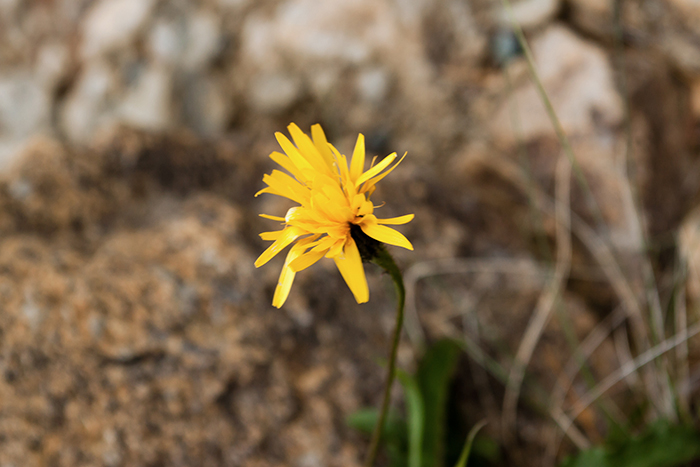 Endemic species and specific variants such as Hypochaeris can be seen.

Mt. Apoi was born from the collision of two plates: approximately 13 million years ago, the Eurasian plate on the western side and the North American plate on the eastern side collided, creating the Hidaka Mountains. Part of the mantle that lie dozens of kilometers deep under the southern tip of those mountains rose to the earth’s surface to create Mt. Apoi.
The mantle was formed of green rock known as peridotite, and as the mantle remains in its original state on Mt. Apoi, it is possible to see it above ground, directly, with the naked eye. The countless minerals found in peridotite prevent the growth of vegetation, creating a pseudo forest limit above Level 5 of the mountain, where peridotite outcrops can be seen and large trees do not grow. 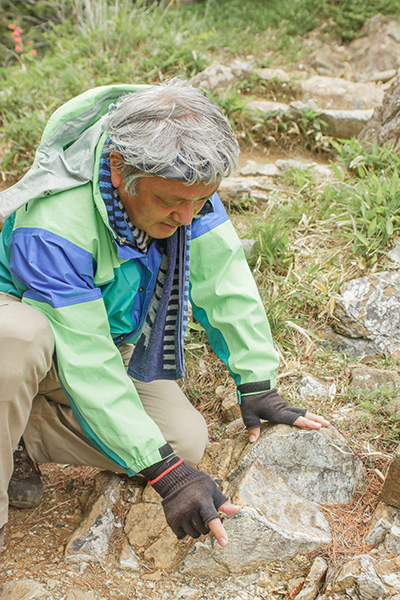 Masato Tanaka, a curator at the Mt.Apoi Geopark Visitor Center.

Kelp that conveys the history of life in the region

One of the reasons people have lived in the vicinity of Mt. Apoi since times gone by is the fact that high-quality Hidaka kelp can be harvested there. The minerals such as magnesium and iron content in the peridotite flows from the rivers to the sea, and this has a favorable effect on the kelp. In the town of Samani, kelp-drying beds are scattered with fragments of peridotite. According to local fishermen, “peridotite is heavy and doesn’t stick to the kelp. The ventilation is also good.”

Peridotite scattered on the kelp-drying beds.

The river that flows through the expansive Horoman peridotite complex, which includes Mt. Apoi, has created a gorge. Utilizing the flow of the steep river incline, a power station was established there in 1935. The power station is currently operated by Nippon Denko Co., Ltd.
Inside the No. 3 power plant, which was completed in 1954, there are two large tank-like structures that make a tremendous noise. According to Atsushi Takahashi, “They contain the generators and the noise is the water turbines revolving. Apart from the machinery, the power station is almost the same as it was when it was built.”
The amount of water is regulated at ground level and the water turbines revolve at 600 rpm, maintaining a stable voltage. The water is sent from a dam upstream, and if you look downstream from the dam you can see the river flow suddenly becomes narrower. The dam was built right where the water gorge starts, and the power of the flow needed to generate electricity is created naturally. This is a natural electrical generation system created by peridotite. 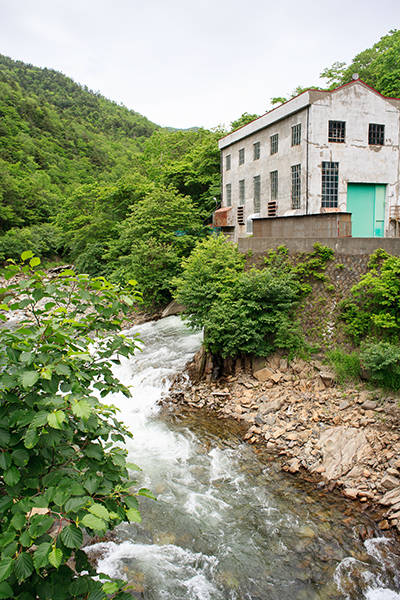 No. 3 power plant. The water is reused at the No. 2 power plant downstream and then flows into the sea. 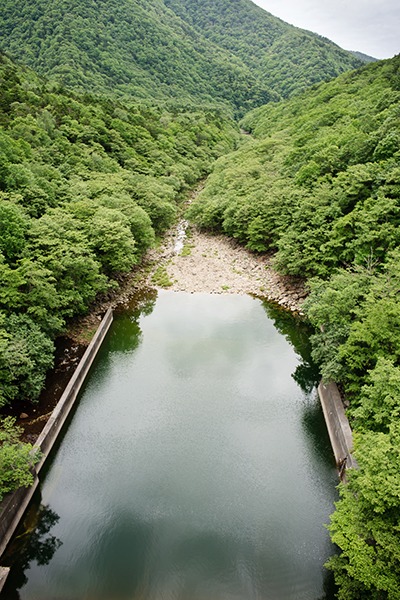 The Horoman River suddenly becomes narrow due to the difference in geological features. 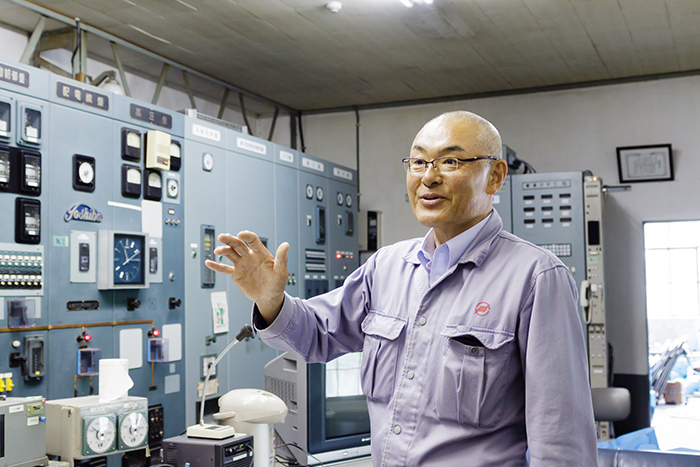 After two hours of climbing we reached Level 8. Here is the extreme opposite of the abundant forest and rich soil. However, because of original richness this brings, the view of Samani from Mt. Apoi is stunning. 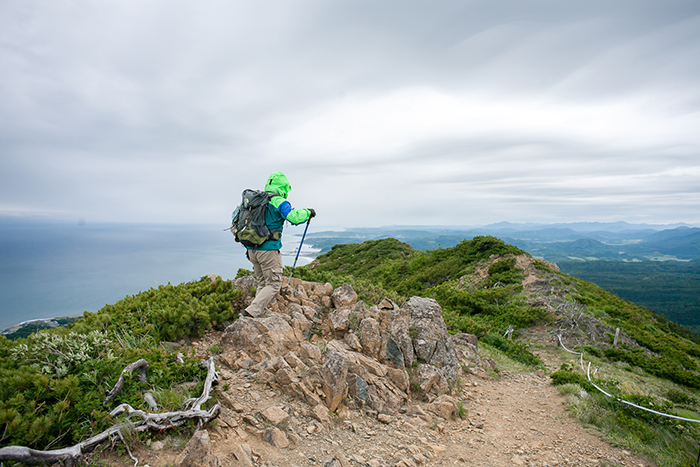 The view of downtown Samani from Level 8.