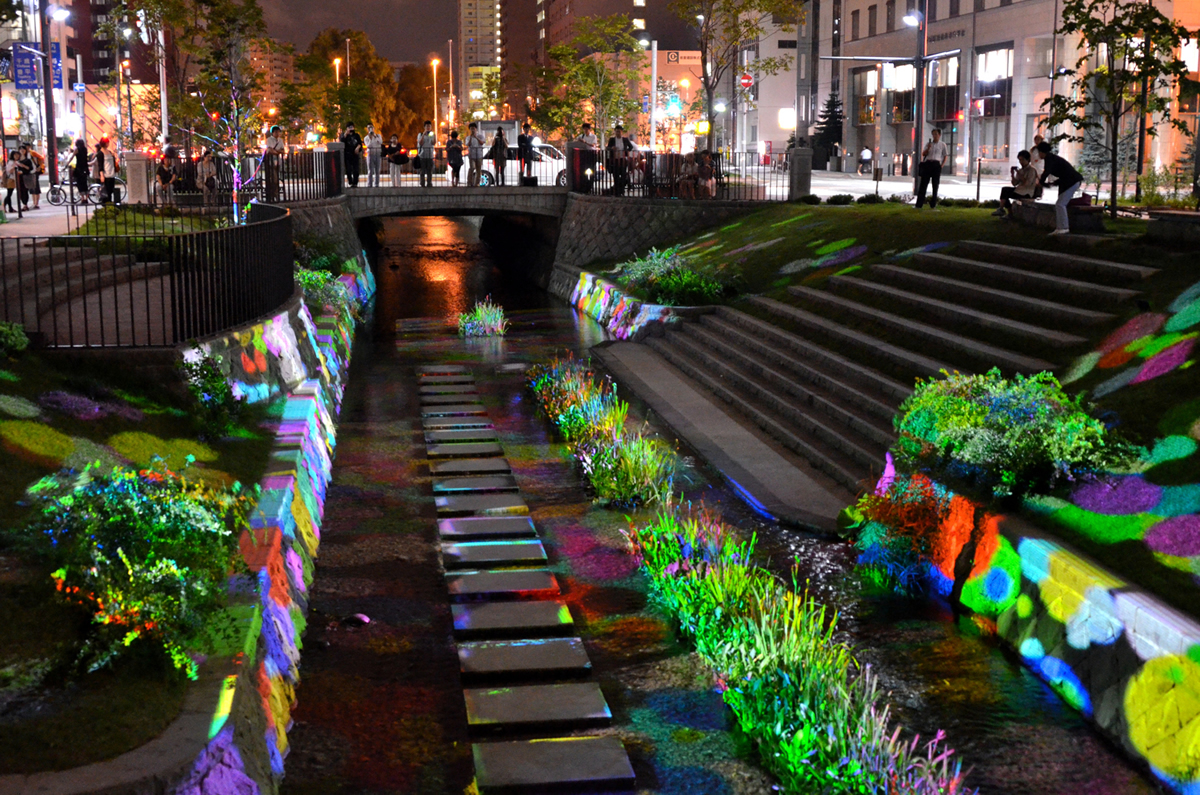 Sosei River Park is a small park in the heart of the city. Colored by greenery and art, it's a great place to take a stroll and sense the history of the area.
Words by Aratame Nanae
Translation by Xene Inc.

An autumn morning, and Sosei River Park is surrounded by the rush of commuters and traffic. But if you venture down to riverside in the park, closer to the babbling stream, the congestion of the city becomes nothing more than background music. 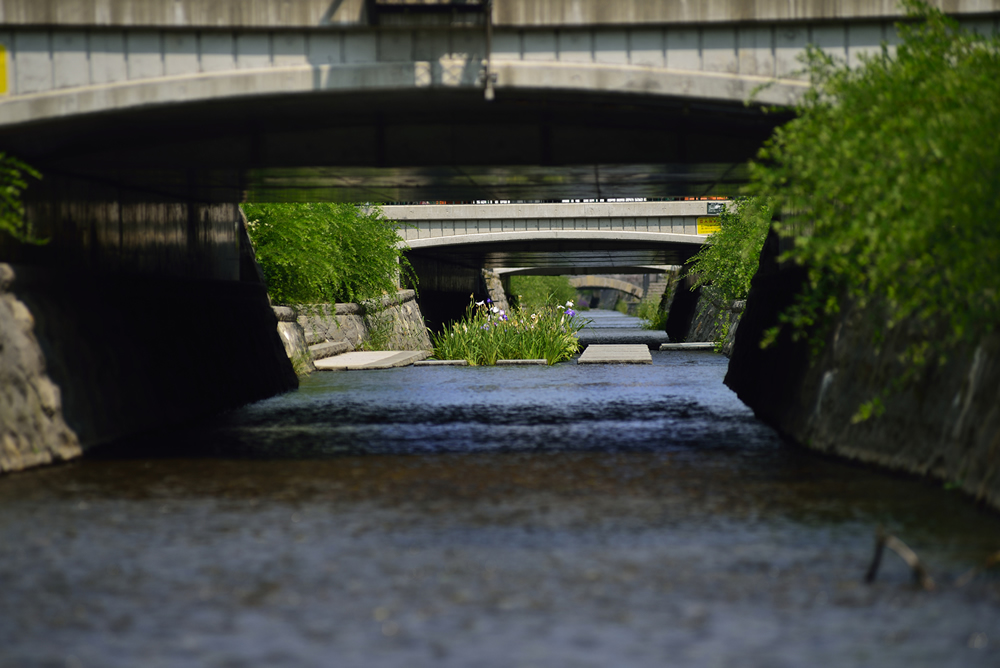 Stepping stones discovered at the southern tip of the park

Sosei River Park was originally a space that linked two underpasses, and was designed as an aquatic urban oasis with historical elements. The roots of the Sosei River itself date back to 1866, when the Otomo-bori irrigation waterway was built under the supervision of Otomo Kametaro, who had been dispatched by the shogunate. The waterway was later widened to create a canal that helped support Sapporo's urban development. In the center of the south-1 block of the park is "Pioneers' Plaza," where the area’s history is conveyed. Photographs are displayed in the brick-built rest area, and next to it, a statue of Otomo can be found. 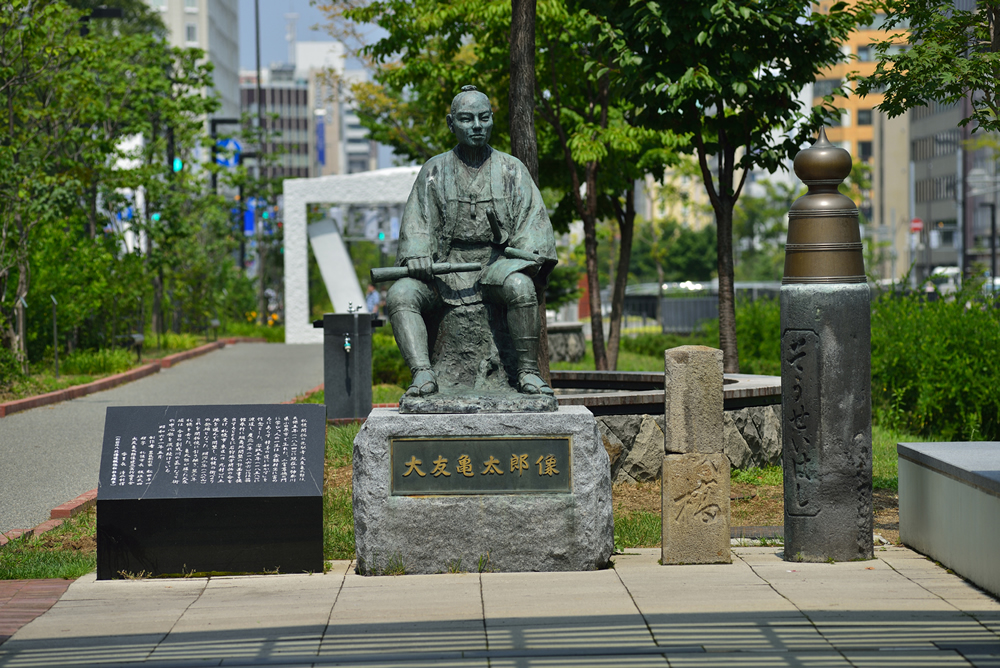 One of the early pioneers of Sapporo, Otomo Kametaro

In the past, circuses and end-of-year markets are said to have been held on the banks of this river. Subsequently, the river became less accessible, but thanks to the development of the park, the people are now returning. The past and present blending together in the park's morning sunlight.。 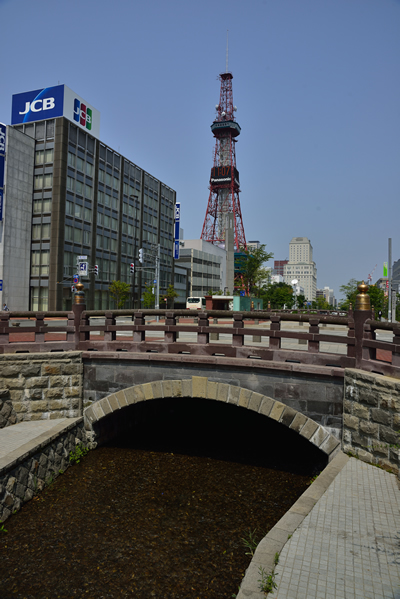 The works of art scattered around the park are also appealing. A total of 17 pieces by landscape artist Danzuka Eiki and sculptor Yasuda Kan, who hails from Bibai in Hokkaido, can be found in the park, and searching for them is a great way of spending time there. 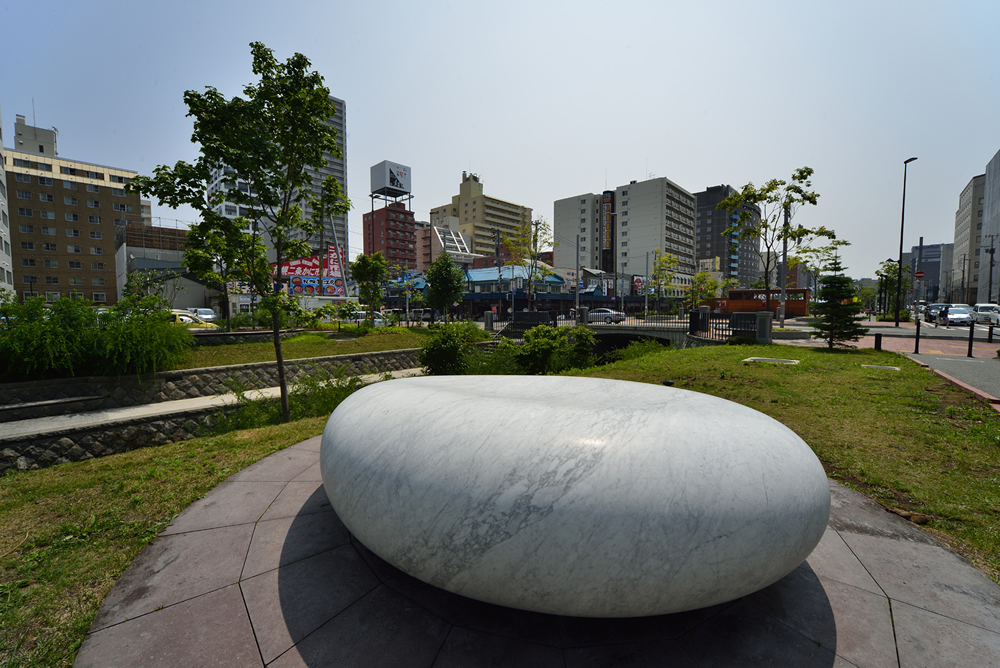 Yasuda Kan's "Tenpi", located opposite one another on either bank of the South-2 block

At the intersection with Odori is "Central Plaza", where the "snow ring" – a white circle 20 meters in diameter – straddles the river. This is the work of sculptor Nishino Kozo. This piece indicates the "zero" on the axis of Sapporo's grid-like plan, and is unique in that visitors are free to walk all the way round it. 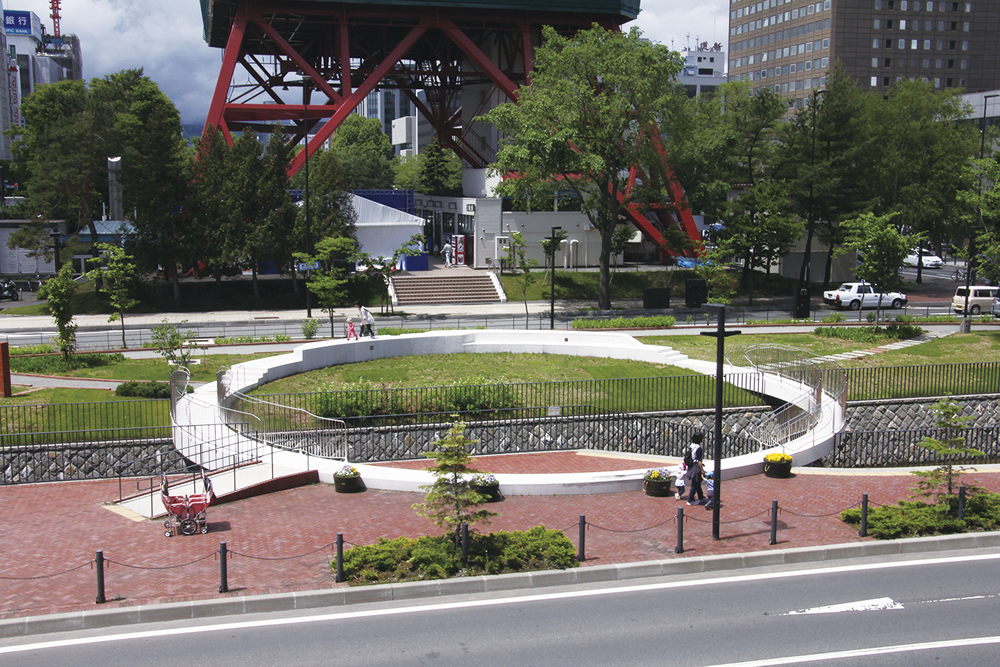 The next time I visited the park was on a winter's night. As I waited for the traffic signals to change I heard the Sapporo Clock Tower bells. I met a friend near Nijo Market and he took me to "Romeo", a Spanish-style bar in the M's East building on the north side of the market. There, at the counter, we feasted on "Neapolitan spaghetti" seasoned with black pepper.
There are said to have been izakayas in the Nijo Market neighborhood since the Meiji period. As ever, the river continues to watch over the lives of the people who come and go.

Not long now before the snow melts. In spring the plants will bud and the sounds of the stream will reverberate with vigor. The art will re-emerge from its resting place beneath the snow, and the curtain will be raised on a new Sosei River Park symphony.