Following an old map on a walk around Sosei Higashi #1 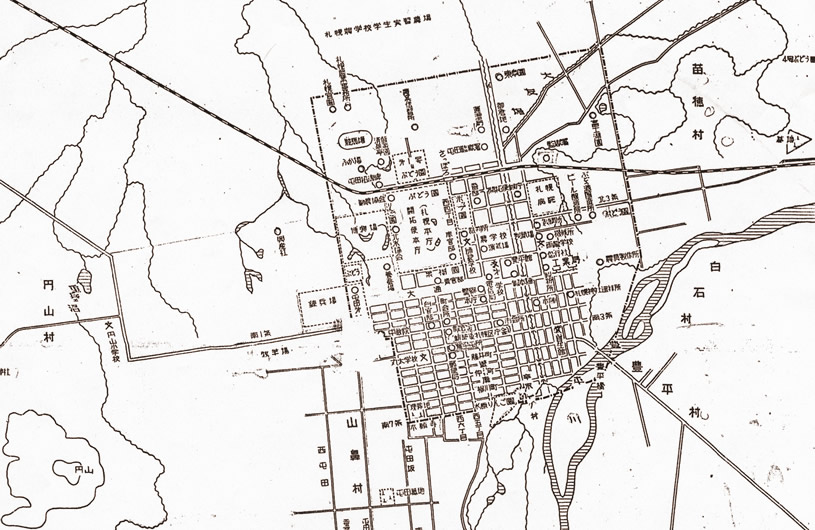 A high quality map is like a library full of history books of the area. Let’s follow an old map to learn the details of Sosei Higashi as we walk through town.
Words by Taniguchi Masaharu
Photographs by Ida Yukitaka
Translation by Xene Inc.

Hokkaido Jingu Tongu near the east end of Sapporo

There is a map called the "Nostalgic Map of Development Commission / Sapporo Prefecture." This map is of the town from the 1870s to the mid 1980s. During this time, the north end of the city was occupied by the railroad track (Horonai Railway, currently JR Hokkaido Hakodate Mainline), the south end was the Higashi Honganji (temple), the west end was located around the current Hokkaido University Botanical Garden, and the east end was beyond Hokkaido Jingu Tongu. 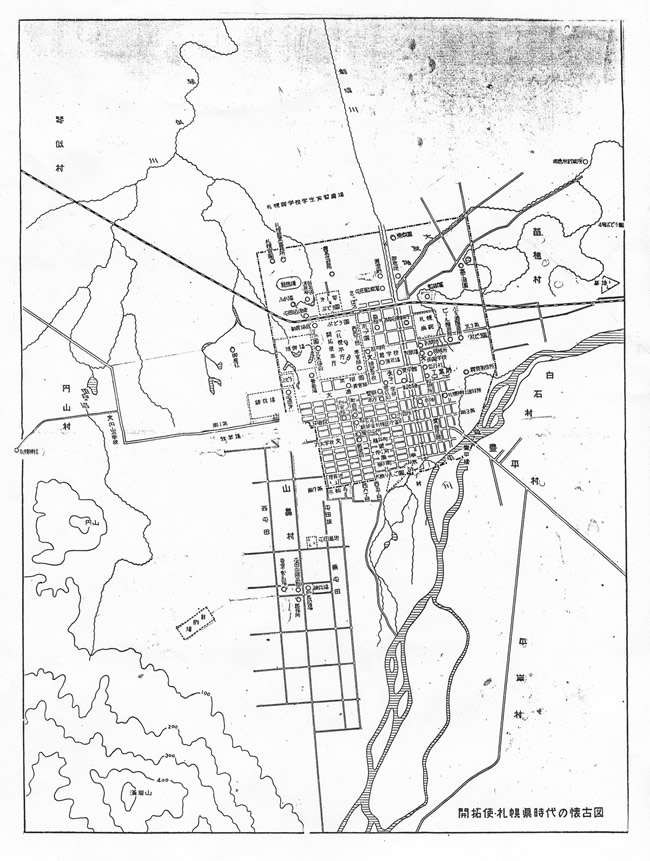 Tongu was built in 1878 as a Youhaisho (place to bow in the direction of the Shrine) of the Sapporo Shrine. The Youhaisho was located on the corner where the current Higashi 3 Chome dori and Minami 1 Jo dori intersect. 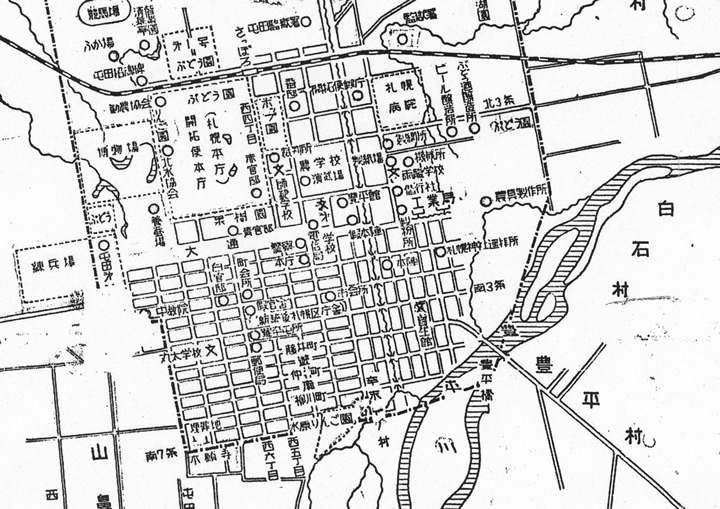 The Sapporo Shrine is located in Maruyama, far from the city center. 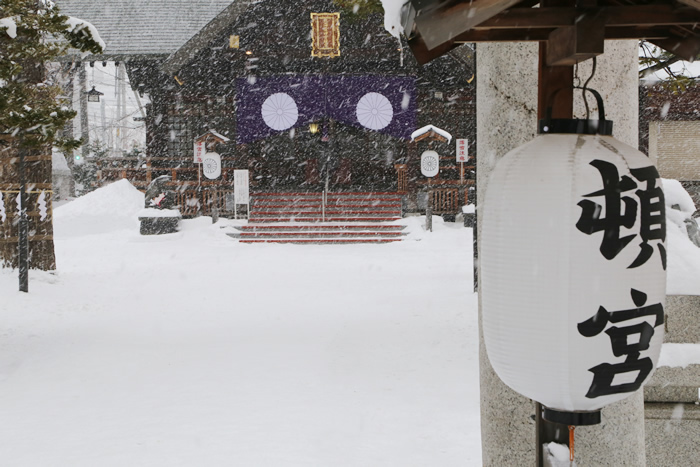 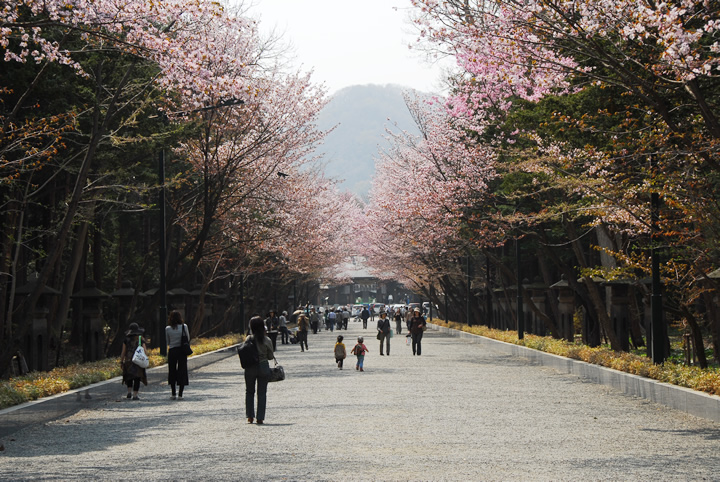 From Hakodate Magistrate to the Construction of the Development Commission Infrastructure

Nakagawa Genzaemon was born in present day Tokushima prefecture. His original name was Tamura Ichibe. He was adopted into the Nakagawa family construction and civil engineering organization, and inherited the name Nakagawa Genzaemon from his predecessor. 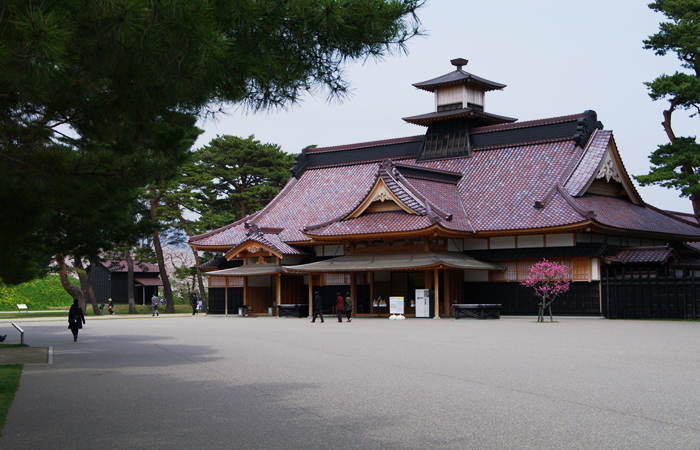 When the Development Commission began urban development of Sapporo, all the construction was entrusted to second generation Genzaemon. The Nakagawa family constructed one building after another, including the temporary office building and official residence of the Development Commission, Sapporo Shrine, and a prison. They also constructed homes for immigrating farmers, and were responsible for constructing the streets and high roads. However, a significant loss was incurred with the construction of Horonai Railway and as a result, the company was forced to discontinue business. 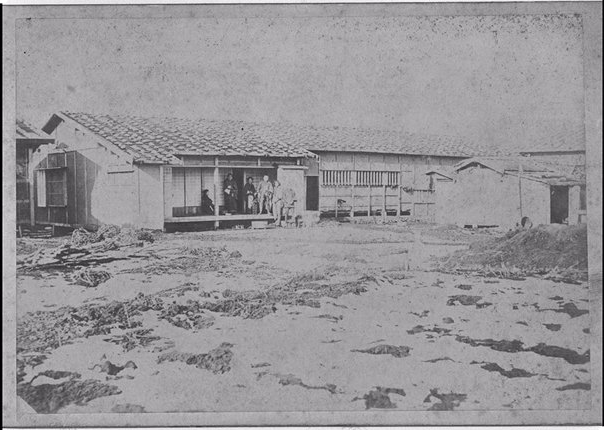 Photos taken of the big house and warehouses of Nakagawa Genzaemon in 1871 still remain. The residence is currently located at Odori Higashi 2 Chome-13 Banchi, near the Tongu. Nakagawa donated 540 tsubo (1782 m2) of land for the Sapporo Shrine. This was two years before construction of the Horonai Railway. This must have been the golden time of Genzaemon's life.

A journey across time begins with a map with many details of Sapporo.