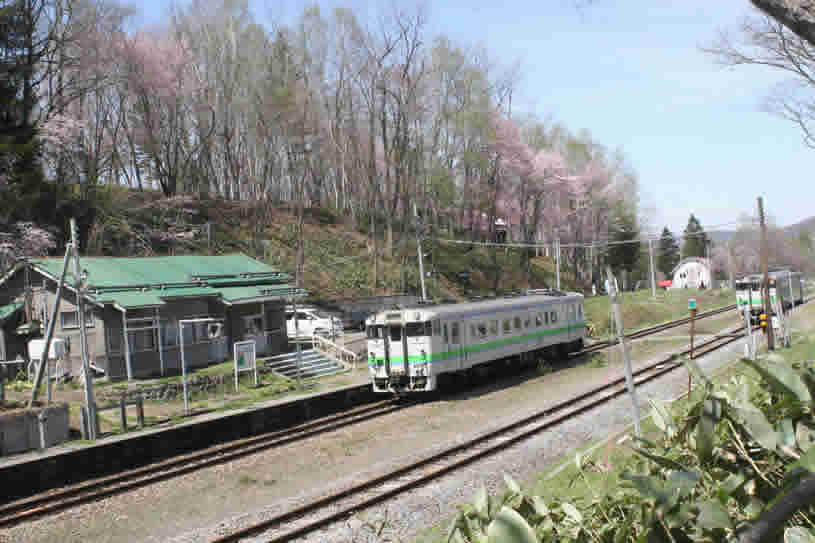 Many of Hokkaido's major inland transportation networks are based on routes that were used by the Ainu. Shiokari Pass, located in the watersheds of both the Teshio River and the Ishikari River, is a perfect location to considering that meaning.
Words by Taniguchi Masaharu
Translation by Xene Inc.

Roads and railways that trace the winter routes of the Ainu

The situation regarding the inland area of Ezo-chi (currently Hokkaido) became known to the Tokugawa Shogunate at the beginning of the 19th century. However, the indigenous Ainu had a grid of inland roads that corresponded to the courses of the rivers, from times gone by.
Upstream of the meandering Teshio River in northern Hokkaido, just before Shibetsu City, it branches into the Kenbuchi River. Well ahead of that is said to have been the most upstream settlement of the Teshiho Ainu. By climbing the tributaries on the southern side of the Teshio River, it is possible to go downstream into Kamikawa via the Ishikari River; climbing the tributaries on the eastern side provides access to the Okhotsk region via the Kitami mountains and Shokotsu River water system. The Shiokari area was the main route used by the Teshio River Ainu and Ishikari River Ainu.
In 1898, the road was opened as a provisional Hokkaido highway in the form of a pass that divides the watersheds of the Teshio and Ishikari rivers.

The majority of the major inland roads and railways in Hokkaido were built along routes originally used by the Ainu; in particular, many were built along routes used in winter. According to observations by the place-name researcher Yamada Hidezo (1899–1992) in "Inland Transportation Route Place Names in the Ainu Language," summer routes would have been hindered by bamboo bushes and mountain streams, while these would have all be covered by snow in winter, allowing the shortest routes to be taken.
In the same thesis, Yamada considered why the Ainu, who lived self-sufficiently in various regions throughout the large island of Hokkaido, shared almost the same language and habits. “Using marine transportation alone, such cultural exchanges would not have been possible. There must have been cultural interaction via inland transportation routes unknown to the Wajin (Yamato Japanese from the mainland).

Next, let's take a look at the period in which the Wajin began to understand inland Ezo-chi in earnest. At the beginning of the 17th century, the Matsumae Clan – which was recognized by Tokugawa Ieyasu as having exclusive rule and trade rights in Ezo-chi – strictly limited the movement of Wajin and did not allow settlement outside the clan's territory. The only Wajin who were able to enter Ezo-chi officially were migrant fishermen who received permits allowing them to come to fish for herring in spring and salmon in autumn. In Edo, little was known about the inland area. By minimizing the contact between the Wajin and the Ainu, the Matsumae Clan attempted to increase the value of its own existence as a mediator.
However, the circumstances changed at the end of the 18th century. Due to the Matsumae Clan's unfair behavior in its trade with the Ainu, and Russia's advancements southward, the shogunate began to carry out a full-scale survey of Ezo-chi. This is where the shogunate made use of the Ainu trade with the mainland and discovered the potential for the development of Ezo-chi. At the core of this survey work was a member of the shogun's council of elders, Tanuma Okitsugu.

Tanuma eventually fell from power and the survey of Ezo-chi was suspended, but was later revived as a result of battles breaking out between Ainu and Wajin in eastern Hokkaido (1789), and the appearance of a Russian warship off the coast of Nemuro (1792). The appearance of the British ship HMS Providence in Funka Bay (1796 and '98) and Russian attacks on the shogunate base of Karafuto and Etorofu (1806 and '07) resulted in the shogunate taking direct control of Ezo-chi.

Approximately 50 years before Matsuura Takeshiro began walking around Ezo-chi, Kondo Juzo – a member of the shogunate's Ezo-chi survey team – carried out surveys of Ezo-chi on several occasions from 1798. In 1802, he produced a map of Hokkaido and the Kuril Islands (known as Ezo-chizushiki) in two parts (ken and kon). The "ken" map looks very similar to the present map of Hokkaido and, interestingly, a dotted line depicting a route is drawn between the Ishikari and Teshio rivers. Kondo himself walked that route across the Shiokari Pass five years later, but when the map was created it is understood that Kondo had already gathered substantial information about the inland area between Kamikawa and Teshio. 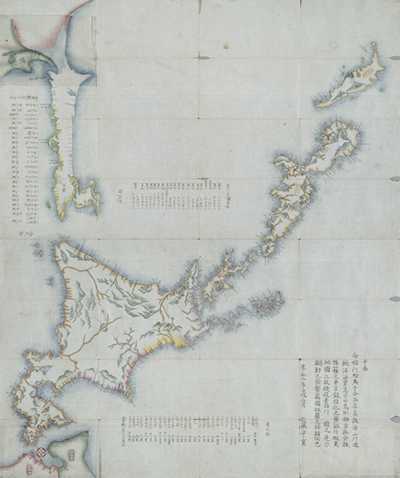 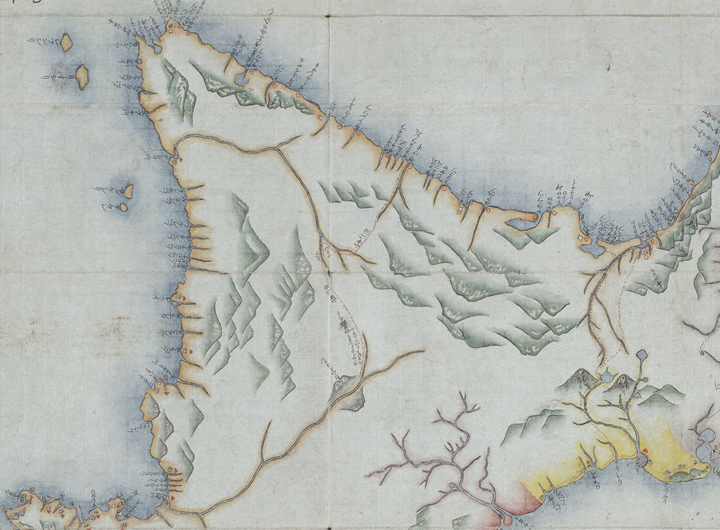 In the large-scale survey of 1807, Kondo Juzo ventured up the Teshio River water system, over the watershed and down the Ishikari River from the Aibetsu River. Based on this experience the Ezo-chizushiki was further developed and the Ezochizu (map of Ezo-chi) was created (1809). Subsequently, Kondo claimed that Ezo-chi should be developed around the Kamikawa basin.
It was the beginning of the 19th century when the shogunate decided not to entrust the running of Ezo-chi with the Matsumae Clan. The shugunate's leaders had become aware of the situation regarding the inland area of faraway Ezo-chi. Because of the many perilous spots on the coastal routes on the Sea of Japan side of Ezo-chi, it was necessary to find inland routes on the way to Soya and Karafuto. The watersheds of the Ishikari and Teshio rivers were discovered to be such symbolic key points.

Currently, the National Highway Route 40 and JR Soya Main Line go over the Shiokari Pass. During this season, the area around Shiokari Station is one of Hokkaido's leading locations for Sargent's Cherry blossoms. The area is familiar to locals as Hitome Senbonzakura (at first glance, a thousand cherry blossoms).