| FEATURE ARTICLES | Spending time at Sapporo Agricultural College Farm No. 2
A walk through the history of Farm No. 2-3

The view as seen through a guided tour 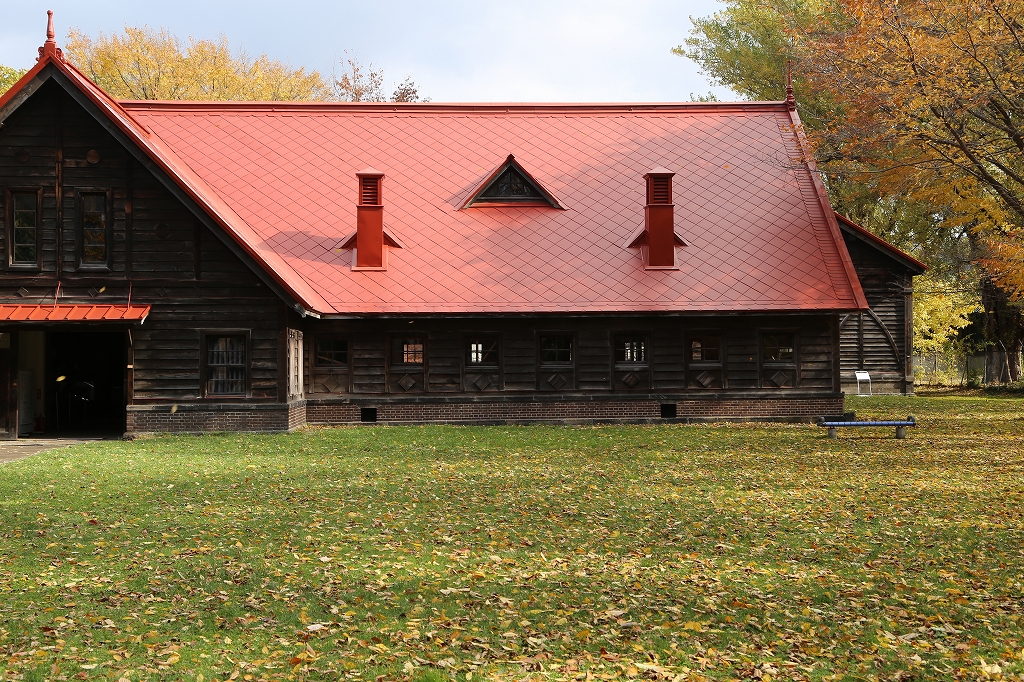 The wall of the barn is decorated by Japanese craftsmanship based on a Western design.

Walking under a clear autumn sky with a volunteer guide on the “Farm No. 2 Guided tour”
Words by Ishida Mie
Photographs by Ida Yukitaka
Translation by Xene Inc.

Before 10am, October 28, 2017. A clear day.
Before the tour begins- Thirty participants of the tour gathered early. They all looked excited. They were divided into three groups and the tour began on time.

Inaba Yoshio joined the volunteer activities at Farm No. 2 last autumn and was our guide. He attended a public lecture held at Enyu Gakusha Community Hall, located next to Farm No. 2 and decided he wanted to participate in volunteer activities as a way to give something back to the community and show his gratitude. Eight volunteers work to clean the farm, maintain displays, and serve as voluntary tour guides. They explain the history and meaning of the farm to the visitors.
Mr. Inaba smiled and said, “When I was assigned as a tour guide, I rushed to the library to study.”

An old rice planting machine is displayed on the second floor of the Corn Barn. Mr. Inaba, who was born into a rice farmer’s family near Asahikawa, experienced using the machine when he was in elementary school.
“In farming villages in the early 1950s, children provided needed labor and many schools offered farming leave for about one week during the busy farming season in spring and autumn,” he explained from experience feeling. 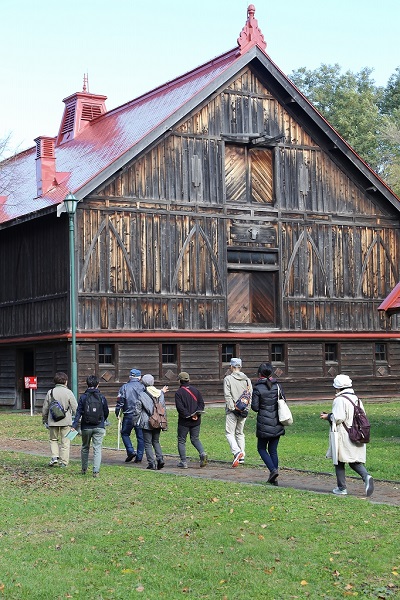 The tour takes about one and a half hours. 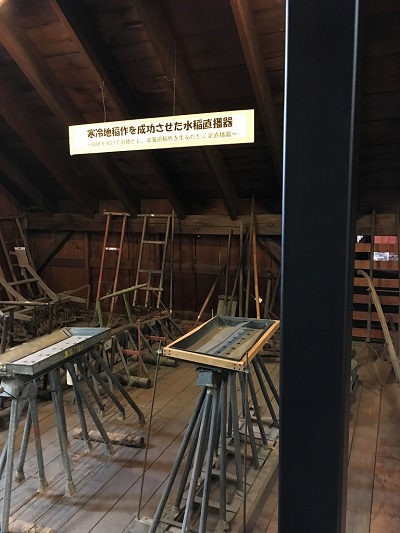 A rice planting machine used in Hokkaido in the early twentieth century.（Photographs by Ishida Mie）

Various people visit Farm No. 2. Each one is interested in different area, so Mr. Inaba tries to be flexible on his tour.

One time, a person was staring at the window pane of the barn. The surface of the glass set in the upper window frames is rippled, has air bubbles. The glass set in lower frames seems to have been replaced, and is same as modern-day glass. The upper glass is valuable since it was probably made during the Meiji era (1868-1912).
Many tourists from Taiwan admire the mountain ash trees in autumn colors. Mr.Inaba explains to them that these are common in Hokkaido.
He hopes that people who were not so interested in Farm No. 2, especially children, can feel something in this place. He seeks to be a guide who can provide easy and interesting information to visitors. He is always thinking about those things.

He showed me his sketchbook.
History of the Farm, features of the buildings, etc. are written in the sketchbook. World events of the same period, such as “Edison invented the electric lightbulb” and other information are also included, and are useful when explaining things to children. He also writes down the reaction of those on the tour and their questions. When there is something he does not know well, he does research and adds the information to his sketchbook for the next tour.
The sketchbook is like his growing “crib notes”. Thanks to the gentle storyteller, I also became fonder of Farm No. 2 than ever before. 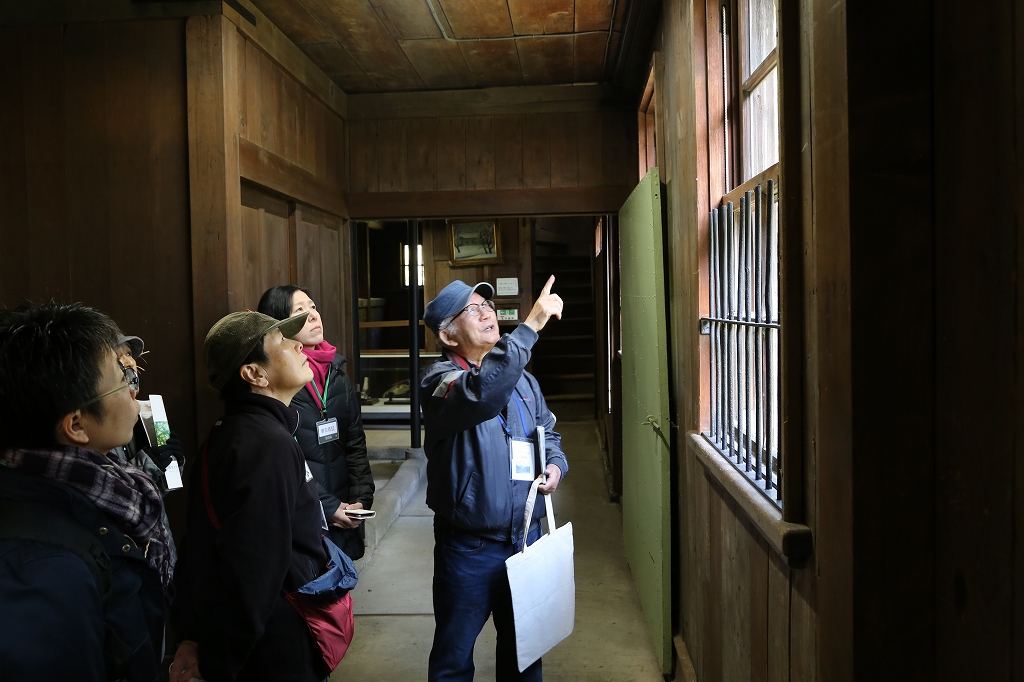 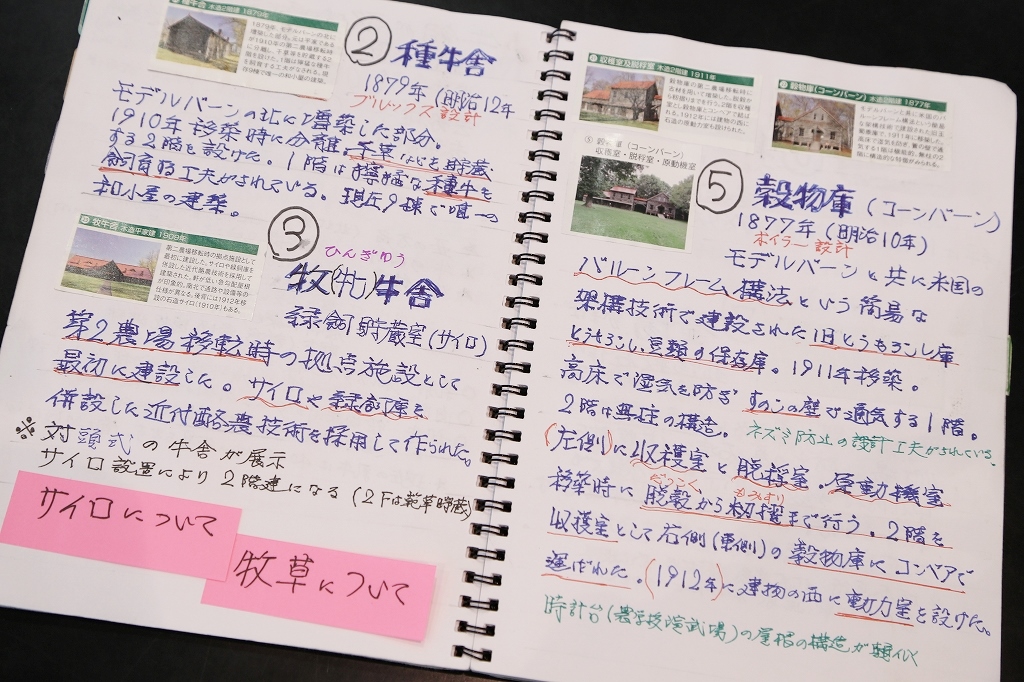 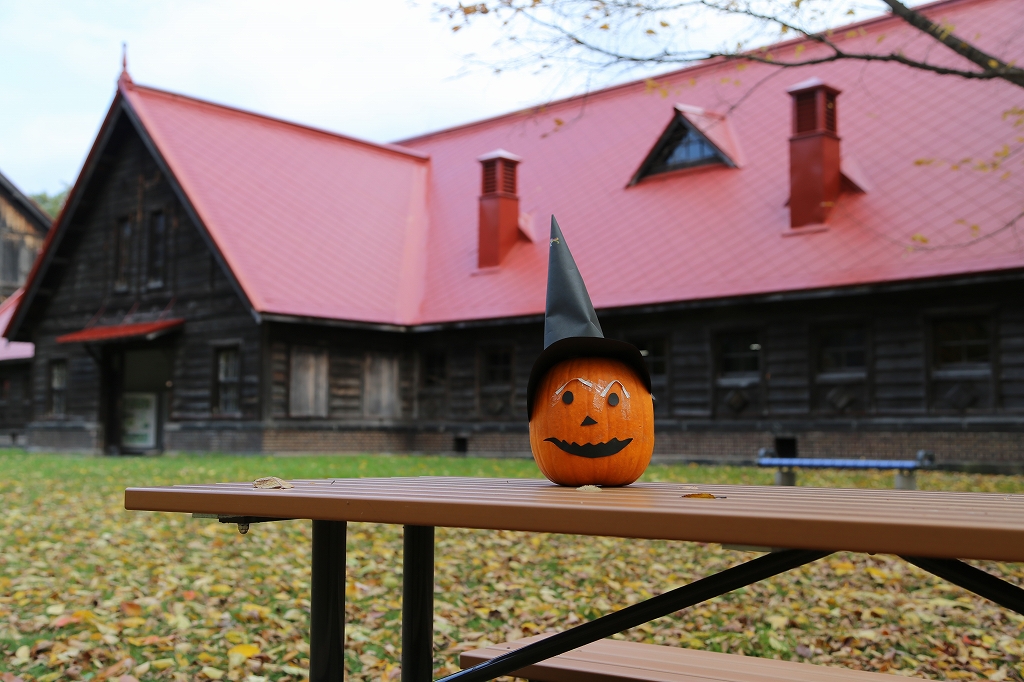