Inherited by the University Village Forest 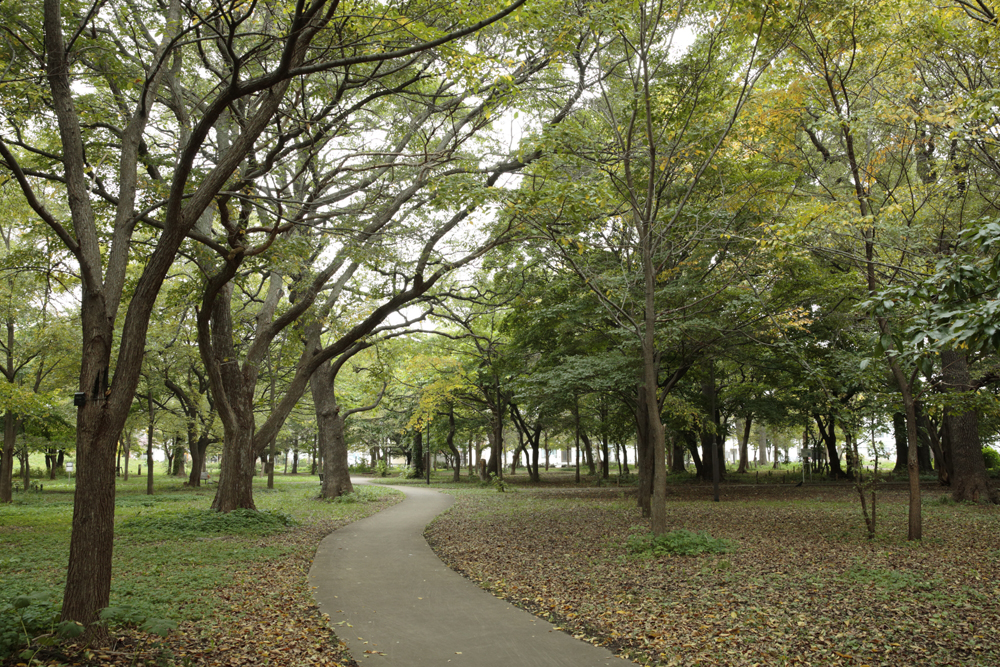 The University Village Forest (Daigaku-mura no mori) park is located in Higashi-ku, Sapporo City, and was once Sapporo Agricultural Farm No. 3. As if stuck in time, some people love and protect this place.
Words by Aratame Nanae
Photographs by Ito Rumiko
Translation by Xene Inc.

Stepping into the Forest within the City.

There is a magical park in a residential district in Higashi-ku, Sapporo City. Massive trees with lofty branches. Although there is a promenade and playground equipment, the Forest has a primitive smell. This is the University Village Forest with the history of Sapporo Agricultural College Farm No. 3. 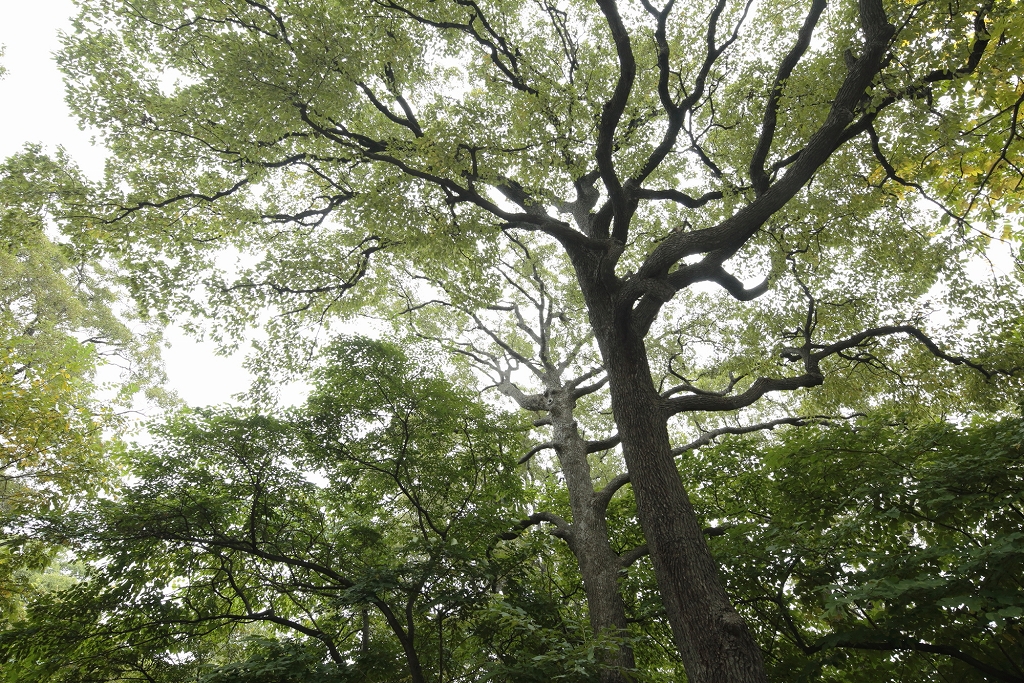 A young tree recently planted next to a giant tree.

On an early October morning, a group of people are working up a sweat in the forest. They are members of the citizen group, “The University Village Forest Conservation Group (Mamoru-kai).” On this day, eleven members are filling composted leaves into bags. 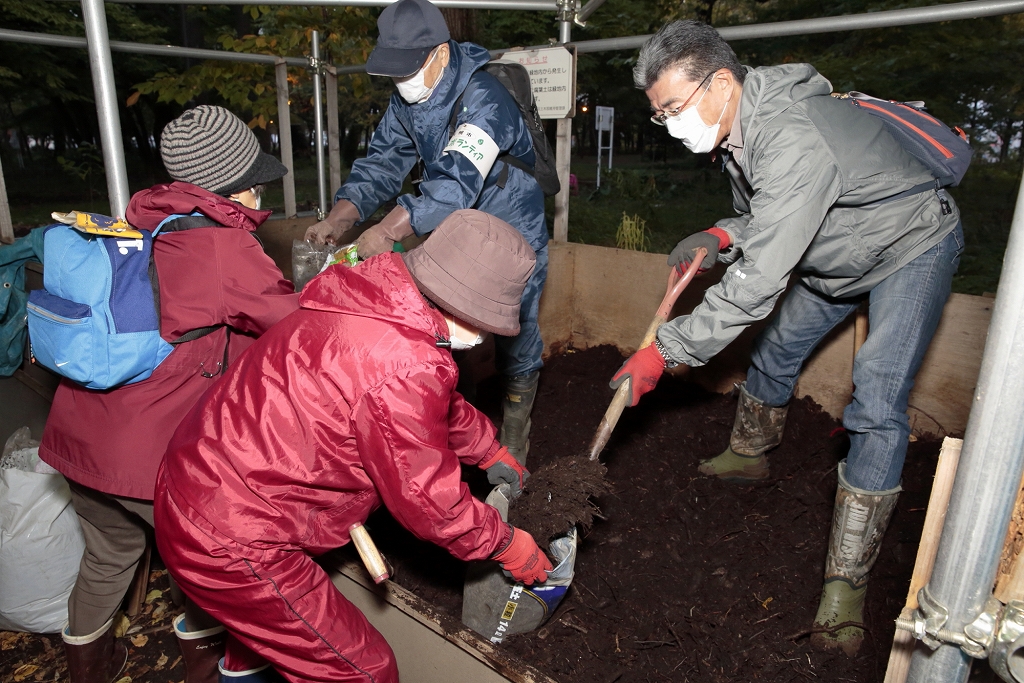 Fallen leaves are left to decompose for a year.

What is the origin of the name “University Village Forest”?
This area was once Farm No. 3 and then became housing for the University teachers, and was subsequently so named.

The University Village Forest was created in 1982. Sapporo City opened a natural area covering approx. one hectare adjacent to the teacher’s housing to the public as an urban green area.
However, as Keiko Ogasawara, representative of the “Conservation Group”, and who lives in the neighborhood, recalls that in the1990s, the forest was in a state of disrepair, with dead trees and rampant weeds, and surrounded by a fence. Even the local people stayed away from the place at night. 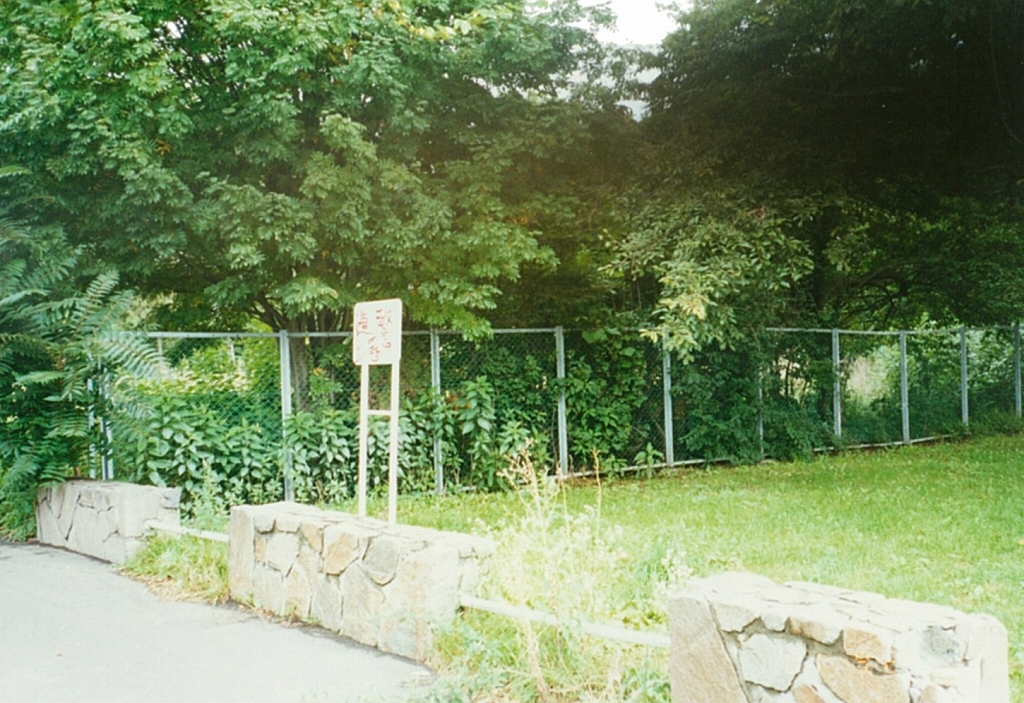 The University Village Forest circa 2001. (Photo courtesy of Keiko Ogasawara)

Dissatisfied with just standing by, Ms. Ogasawara formed “The University Village Forest Conservation Group” with several of her friends in 1996. The group launched a campaign, requesting Sapporo City to purchase the national land around the Forest, which the city subsequently acquired. The expansion work of the Forest was completed in 2002.
However, that was not the end. The group then faced the huge task of considering what the Forest should be like, and invited experts on the natural environment and held discussions with the city regarding maintenance projects.

It has been 14 years since the Forest became a place to relax. The “Conservation Group” continues to love and protect the “Forest”.
“Many people helped us make this a comfortable place. I want to watch over it throughout my life as proof that I lived.” Ms. Ogasawara remarks. 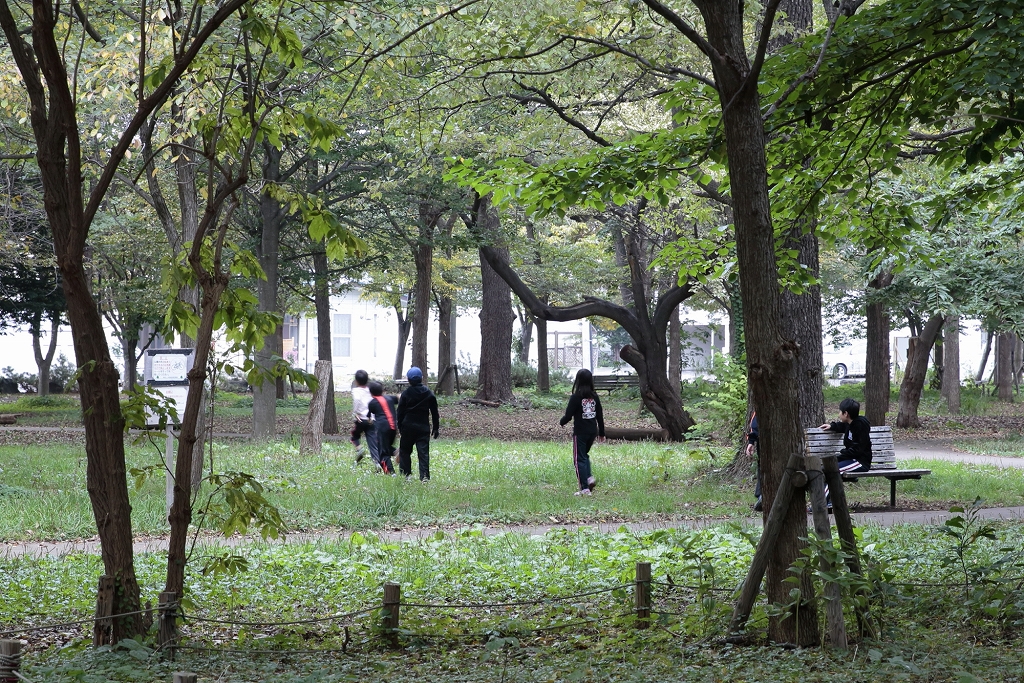 Children playing in the Forest. 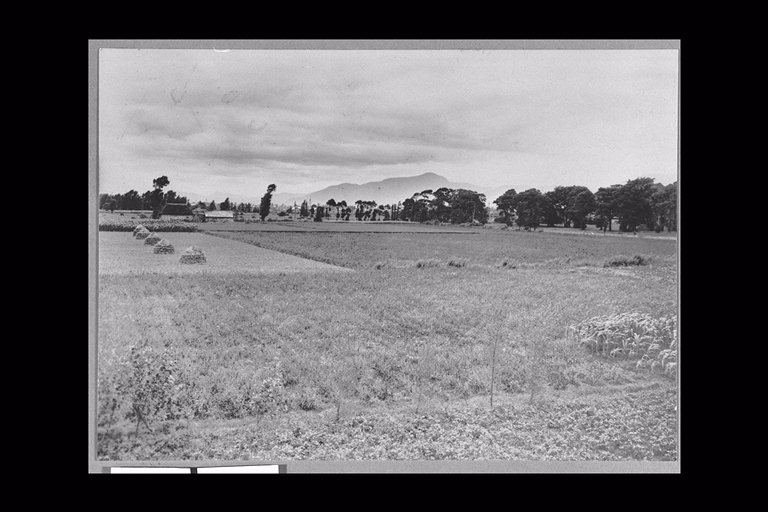 Why even hire tenant farmers to plow the land?
Judged “unsuitable to achieve development” at the time, the Agricultural College needed to extensively reduce the Farm. In response, one graduate suggested establishing a farm to strengthen College assets, taking advantage of his experience studying in the United States. As a result, the land offered by the Hokkaido Government in 1889 was Farm No. 3.

However at the same time, the Public Accounting Act, which prohibited government offices from possessing assets, was enacted in 1889. The College, established by the Hokkaido Government, was no longer allowed to hold assets or property.

The Farm faced another crisis. To avert it, “Sapporo Alumni Association,” formed by the graduates, took over the Farm and decided to manage it until the day they could return it to the Agricultural College. Six trouble filled years later, the farmland passed into the hands of the Agricultural College, and was named “Farm No. 3.”

The history of the tenant farm of the Agricultural College ended soon after World War II. Hokkaido University sold all its farmland during the farmland liberation movement, and part of the Farm No. 3 became the residential area for teachers, leading to the University Village Forest.

The attractiveness of Farm No. 3. 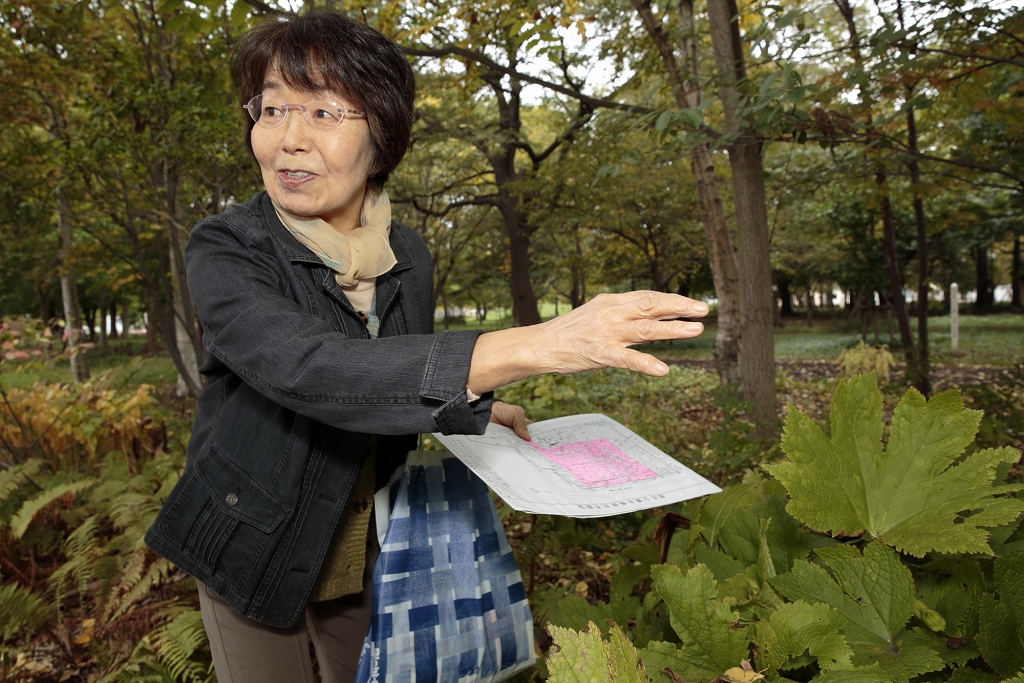 Ms. Ogasawara’s daily routine is to walk through the Forest each morning and evening.

Ms. Ogasawara’s love for the Forest started with the primeval forest in Shiretoko. Ms. Ogasawara moved from Miyagi Prefecture to Shiretoko with her family when she was ten years old.
“Playing in the forest in Shiretoko as often as I liked was a formative experience in my early childhood.”
Ms. Ogasawara married and moved to Sapporo. Soon, she was busy raising two children and working. Later, in the next chapter of her life, she became interested in the Forest, she remarks.

Farm No. 3 supported the Sapporo Agricultural College, which was the driving force behind Hokkaido’s development. The breath of the Farm still resides in University Village Forest, and may still attract the spirit of pioneers. 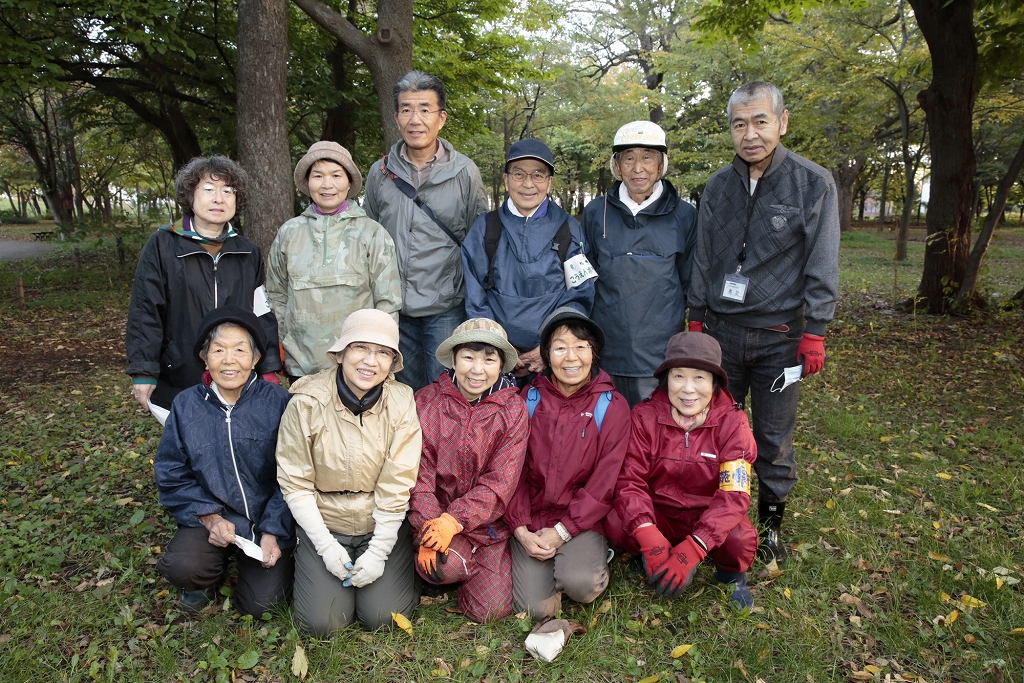 The University Village Forest Conservation Group
Activities on Tuesdays and Fridays, 6:00am to 7:00am. Closed during winter.
WebSite