The Attractiveness of Hokkaido Sake as can only be conveyed by Hokkaido. 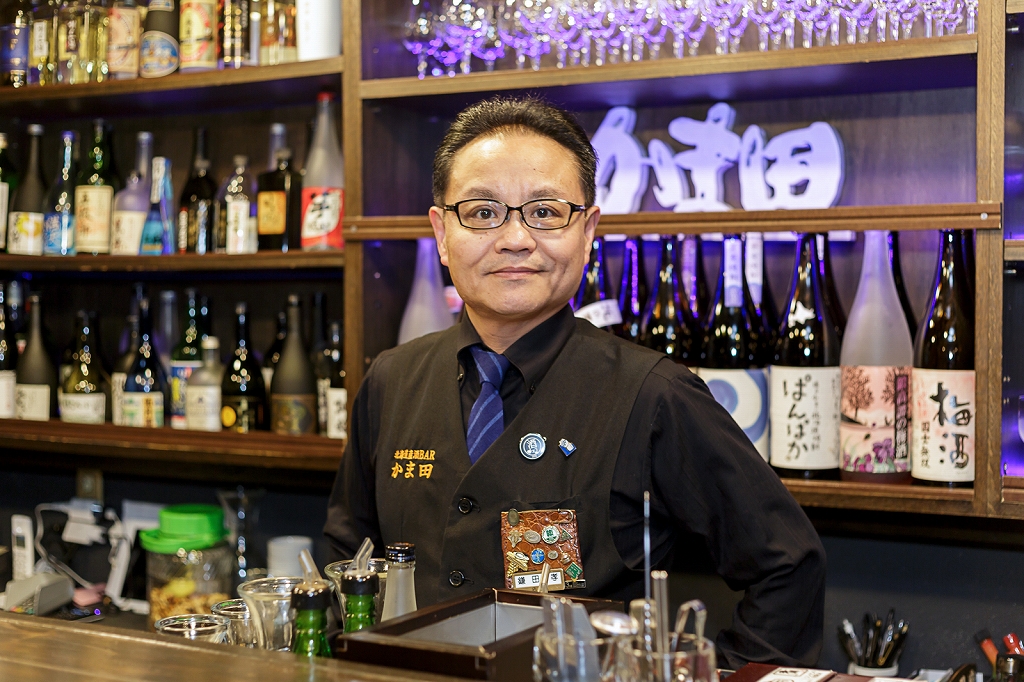 Mr. Kamada standing behind his bar lined with over 300 kinds of sake bottles.

For those who want to enjoy and learn about sake from Hokkaido, “Sake Bar Kamada” in Susukino is the place. The owner, Mr. Takashi Kamada, is an expert on sake.
Words by Aratame Nanae
Photographs by Kurose Michio
Translation by Xene Inc.

Mr. Kamada is one of 250 sake and shochu tasting experts in Japan. He was awarded second place in both the sake and shochu divisions at the World Kikisake-shi Competition from among 30,000 participants in 2012. Mr. Kamada owns a bar in Susukino that specializes in sake from Hokkaido.

“My mother worked at a sake brewery and my father at a beer brewery. Later, they had opened a bar, where I was born as the eldest son. Surrounded by various alcoholic drinks since childhood, I naturally liked alcohol.”

However, Mr. Kamada did not pay much attention to sake from Hokkaido when he was young.

“My father’s favorite phrase was ‘sake comes from rice-producing regions.’. Hokkaido is well-suited for sake production according to its climate and water, but it didn’t have the right rice. Until Hokkaido’s shuzo kotekimai (rice produced exclusively for sake), “Hatsushizuku” was first produced in 1998, sake breweries in Hokkaido relied on rice from outside Hokkaido and regular food rice. In addition, nationwide evaluation greatly varied from one brewery to another.” 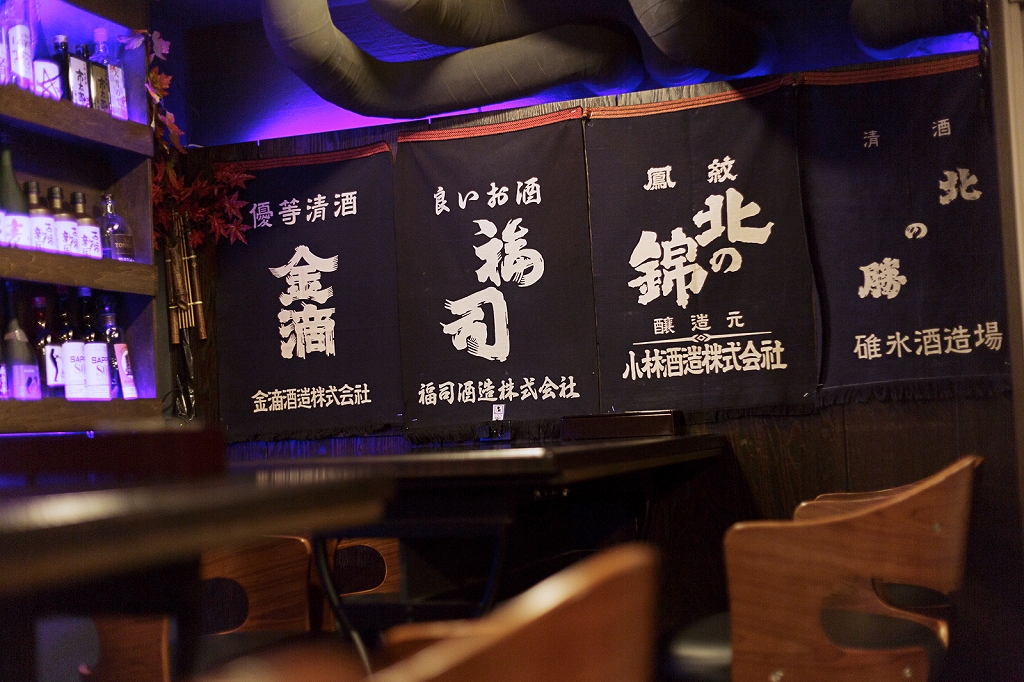 When Mr. Kamada was 28 years old, he moved to England to study. He purchased and managed a pottery business while there, but returned to Japan in 1991 at 30 years old. He served as an accountant at a restaurant and as a cook at his brother’s izakaya (Japanese style bar).

“I noticed a difference in people’s interest in ‘Jizake’ (local sake) from Hokkaido compared to other prefectures. Local sake is popular in Tohoku, but in Hokkaido, sake from other prefectures is preferred. Even after good-quality sake from Hokkaido started to appear, this did not change. Working for the izakaya with hundreds of kinds of sake from all over the country, I began wonder ‘what is Jizake?’”

When Mr. Kamada was 48 years old, he decided to share information on Hokkaido sake to the world. After working at his brother’s izakaya for ten years, Mr. Kamada quit to acquire qualifications such as a sake and shochu taster, which is very difficult to achieve, as well as the “Hokkaido Food Meister” and “Hokkaido Sightseeing Master”. Calling himself the “Hokkaido Sommelier” and he began to arrange sake seminars and events all over the country. Mr. Hisaya Sakemoto, the fourth owner of “Sakemoto Shoten”, was also greatly influenced.

“Mr. Sakemoto was my sake tasting teacher. The taste of sake will change depending on the brewer as well as by each year. The goal isn’t to be an expert in all these things. Mr. Sakemoto emphasized, ‘You can’t talk about sake without learning global standards,’, So I began to study all sorts of alcoholic drinks from around the world.” 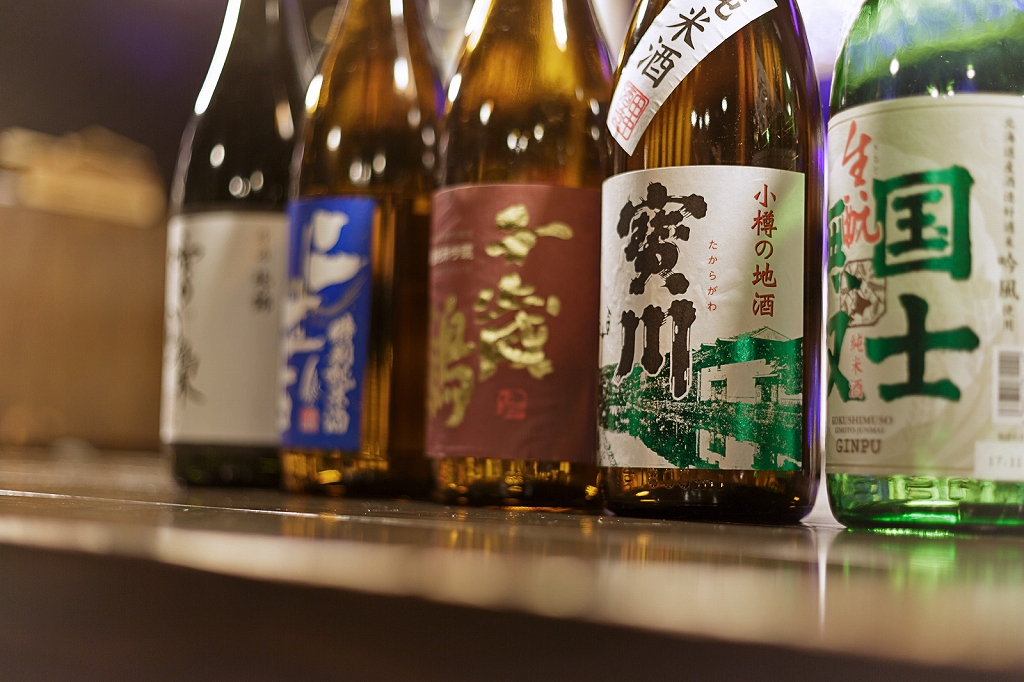 Mr. Sakemoto also advised Mr. Kamada to enter the World Kikisake-shi (Japanese sake sommelier) competition. Of course, extensive knowledge of sake is important, but how to match it with food, convey its expressiveness and provide practical service are also tested at the Competition.

“I entered the sake and shochu divisions and took second place in both. Persons in the industry could get to know me and take notice of my remarks.”

Hokkaido sake is for people from Hokkaido.

In the autumn of 2011, a year before taking second place at the World Competition, Mr. Kamada opened “Sake Bar Kamada.” Except for the olive oil, the bar is crammed with “love of Hokkaido” in over 300 kinds of alcoholic beverages produced in Hokkaido such as sake, shochu, wine, whiskey, craft beer, and foods from Hokkaido.

“Hokkaido is an exceptional place in the country, almost the perfect place as the “means to get drunk.” In addition, this is the best area to express the marriage between sake and food.” 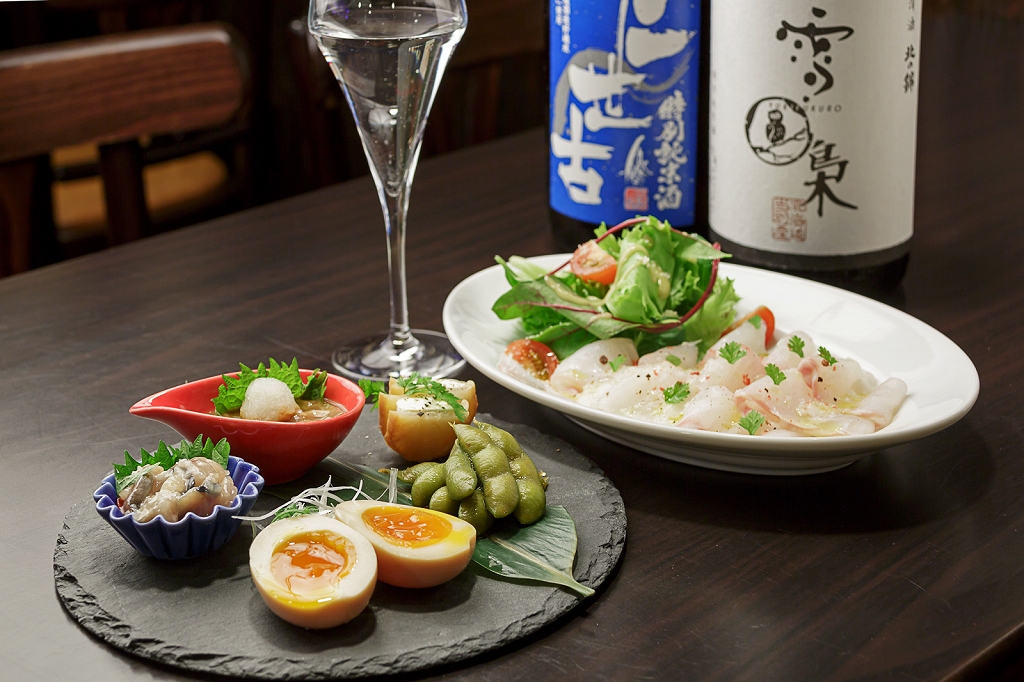 “The question ‘what is Jizake?’ marked the turning point in my life. I could realize the charm of Hokkaido sake lies in the essence of Jizake produced from local ingredients and that can be drunk enthusiastically by the locals. That’s why I, having grown up in Hokkaido, think it’s important to convey the charm of Hokkaido’s sake in Hokkaido.”

The joy of “Jizake” is in the local area. Maybe enjoying sake from Hokkaido is one of the privileges for us who live in Hokkaido.