A Fishermen in Esashi, Living in Harmony with the Sea 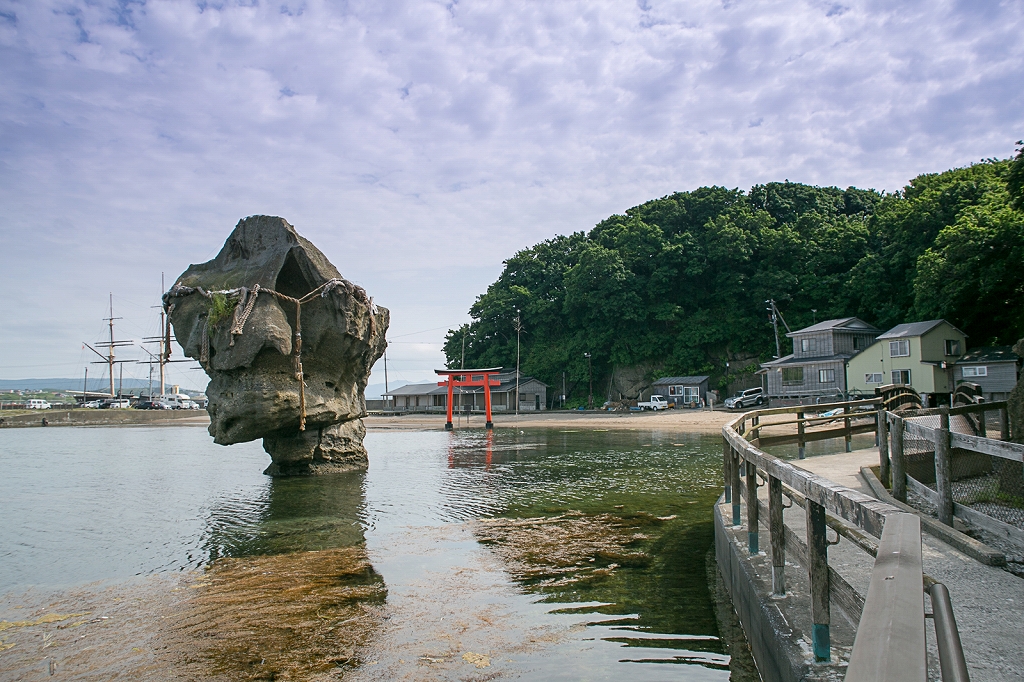 Heishi Rock, guardian deity of fishermen, stands on shorefront of the island

Kamome Island is the symbol of Esashi. The history of the town began from the island’s natural harbor. A house stands at the entrance of the island. I visited Aosaka Takayuki, a third generation fisherman on the island.
Words by Ishida Mie
Photographs by Kurose Michio
Translation by Xene Inc.

Why I became a fisherman

Aosaka Takayuki lives with his family in Kamome Island where he grew up. He has been a fisherman for 36 years. He was trained to be a fisherman by father, Aosaka Mitsuru, both a fisherman and a master of Esashi Oiwake (popular folk music from Hokkaido), as well as by his uncle who also lived on Kamome Island.

Takayuki says, “I wanted to get a driver’s license when I was a senior in high school, but the school had a rule that students were not allowed to get a driver’s licenses if they didn’t have a job. So, I decided to work for a supermarket, got my driver’s license and bought a used car for 50,000 yen.”
After graduating from high school, Takayuki planned to work at the supermarket, but quit after three days because it was boring.
At that time, cuttlefish fishing was in season, so he thought he would help out for the time being.
He continues, “I became a fisherman as a matter of course since the lifestyle seemed nice to me.” 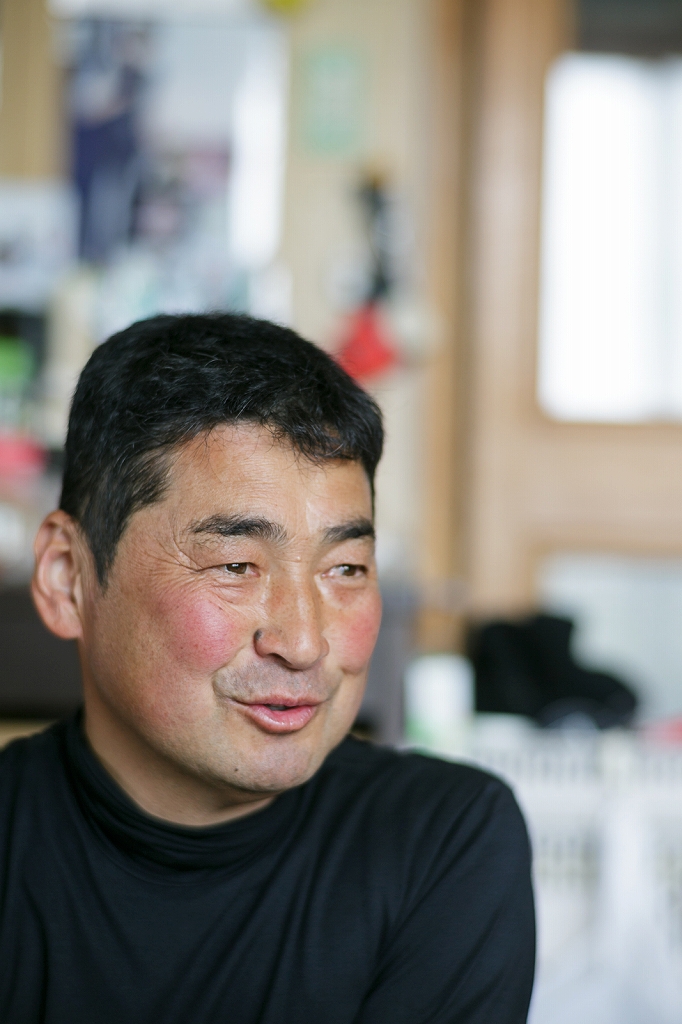 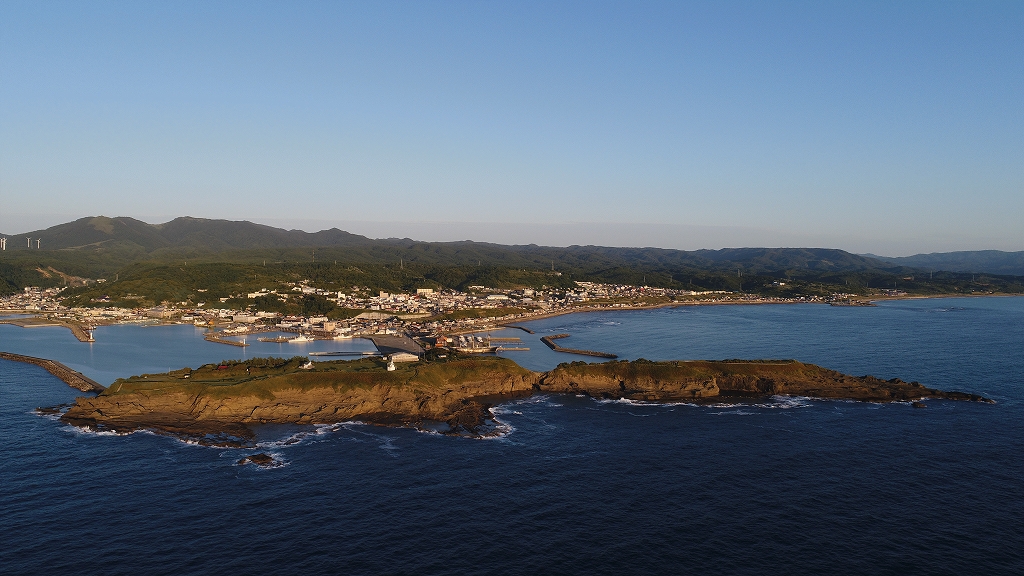 “I didn’t like being a fisherman at first. I just slept when I got sleepy and worked when I was told to. Then my uncle told me ‘Join the union. Also, get licenses to operate the boat and the radio,’ So I reluctantly got them.”

Since his father was busy teaching Esashi Oiwake at that time, his uncle taught him how to fish. After obtaining licenses and purchasing a boat, he gained experience by fishing for sea urchins, abalones, etc. along the sea shore, and helped set the fishing nets.
Still, he could not keep up with his uncle, an experienced fisherman. Takayuki confesses, “I didn’t know about fishing nets at all. It took a long time before I could finally mend them.”

When his uncle passed away due to illness eight years ago, Takayuki inherited his uncle’s boat and was given his net-fishing grounds. As the conditions of his work completely changed from before, Takayuki had to think, decide, and act all by himself. He sometimes spent sleepless nights thinking about fishing.

Esashi, which exploded with herring fishing, was so admired it gained the reputation, “A month like May in Esashi can’t be found anywhere else, even in Edo.” Although herrings disappeared after that, they have recently returned. In February 2017, Takayuki was the first to discover herrings coming to the island en masse for the first time in 104 years.
Takayuki relates, “The beach on the other side of the island had turned milky white in the morning. I thought this might be from herrings, so I called the union.”

Though they quickly began searching for herrings eggs with some divers, none could be found, so the search was called off. However, two days later, a fisherman engaged in diving fishing finally discovered some seaweed with eggs on it, which were then identified as herring eggs.

The amount of herrings caught by Takayuki and his fellow fishermen in January until the end of February this year was approx. three tons, a significant increase of 300% over last year. Efforts by relevant organizations, such as the release of herring fry, and experiments in raising and stocking herring, seem to have resulted in the spawning for the first time in approx. a century.
Furthermore, the town retains a certain amount of herring so people in Esashi can enjoy them at the local restaurants, etc. and a system for the stable supply of herrings has been established. 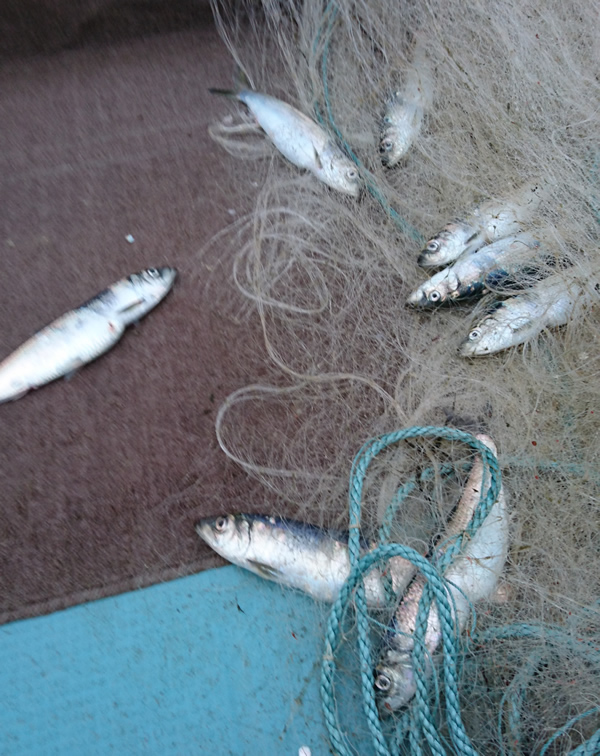 With the Island and his family

Takayuki collects seaweed (iwanori) which grows naturally on reefs along the cliffs on the east side of the island with his wife Yoshiko in the dead of winter. Yoshiko even boards the boat with her husband. Yoshiko smiles and says that since this is a family business, she’ll do anything.

Takayuki and Yoshiko do everything themselves, from collecting to processing the seaweed. They served me some lightly toasted seaweed from their home which they said is slightly defective. As I ate the seaweed with a few drops of soy sauce, the aroma of a sea breeze and the nutrients of the sea filled my mouth and seemed to be absorbed into my body. It was a feast from the area.

Kamome Island, where Takayuki lives with his wife and three daughters. The sea, sky, and Esashi town which embraces the island, have drawn close to me. 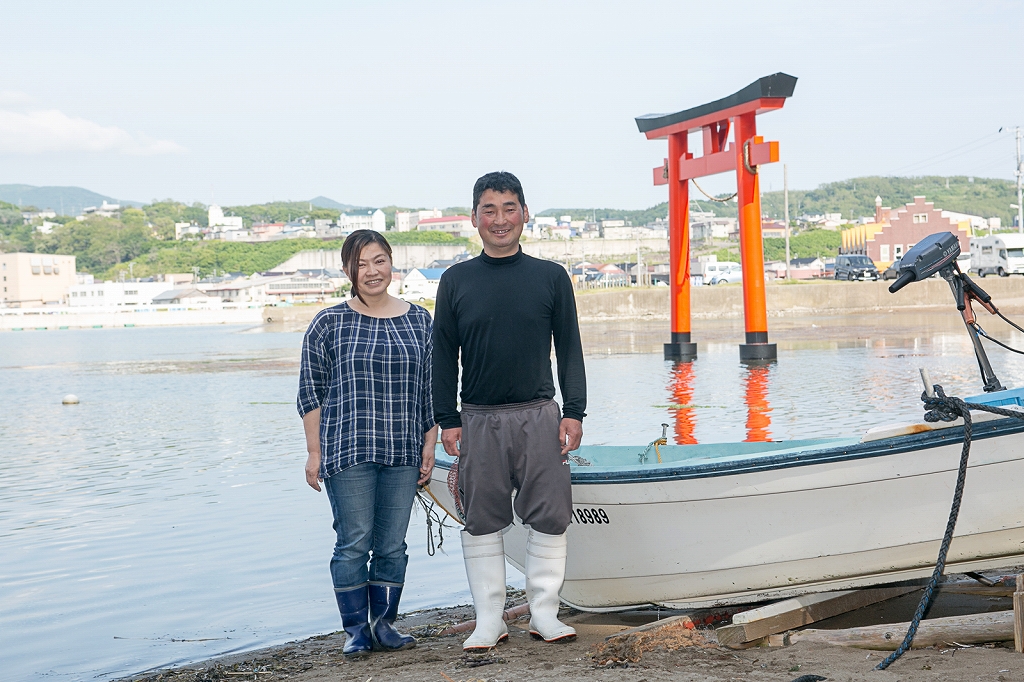 With Yoshiko on the shore front 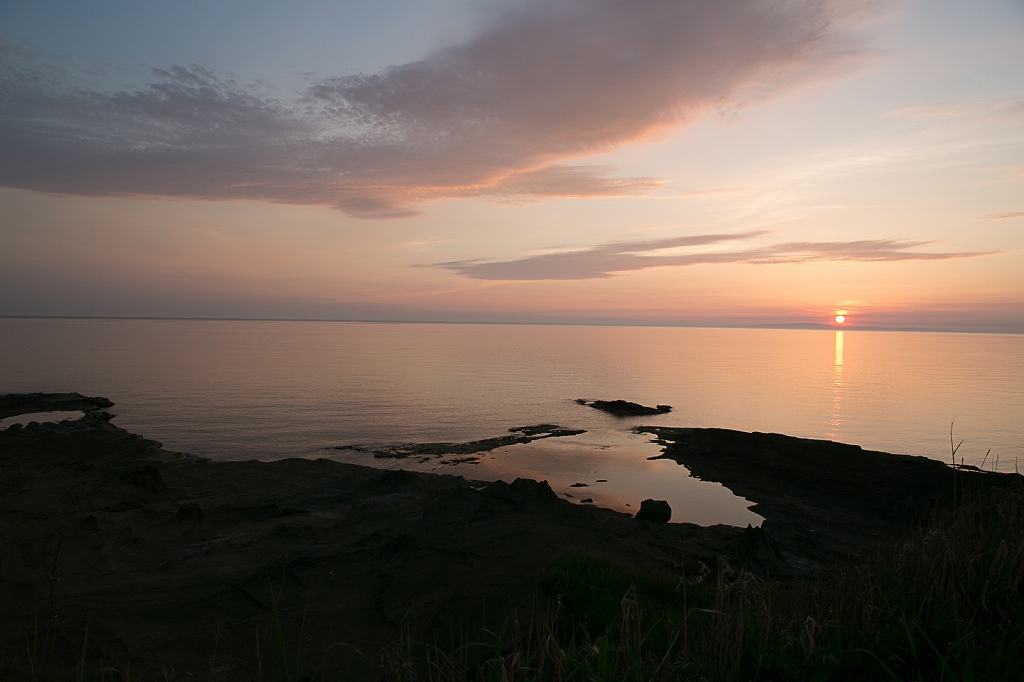 Okushiri Island can be seen near sunset