Ahead of Notsuke Peninsula, the entrance to a whole world 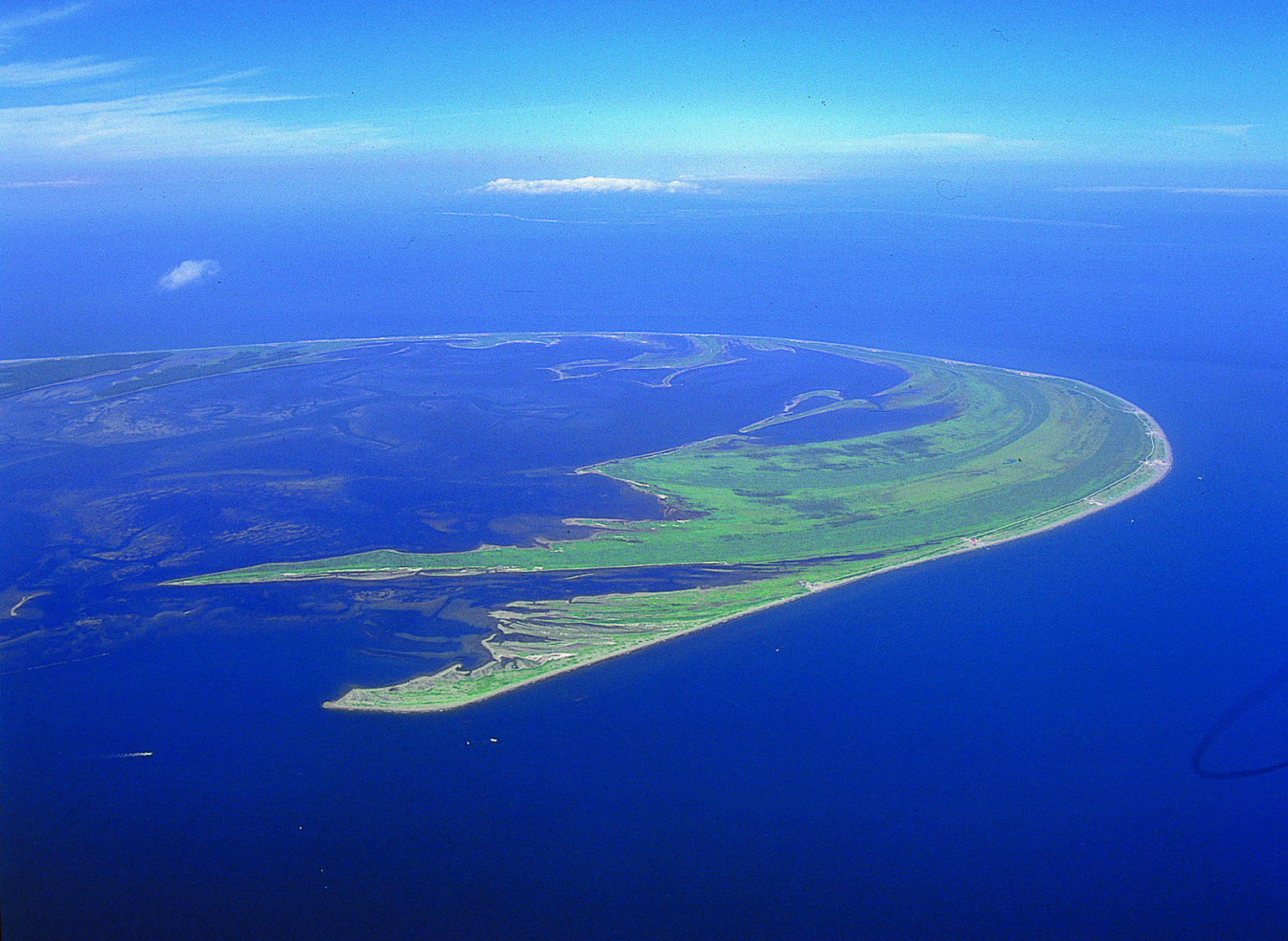 Cool winds are blowing even in summer along the Nemuro Strait Coast, seen from Kunashiri Island. However, throughout its history, it was a very exciting and intense place. One of the important regions is the Notsuke Peninsula. Let's go back in time to when it was just a sandy peninsula jutting out into the strait.
Words by Shibata Miyuki
Photographs by Kurose Michio
Translation by Satomi Saito and Winslow Taylor

A Floating Gate to the Eastern Strait, Notsuke Peninsula

Notsuke peninsula is the biggest sandbank jutting out into Nemuro Strait on the eastern coast of Hokkaido. Its unique shape resembling a fishhook was formed from repeated sand and pebble moraine and seawater erosion by the fast oceanic current in the Nemuro Strait over many years. Seawater erosion causes the Sakhalin fir and Mongolian oak to wither while still standing, transforming it into a magical and desolate scene of Todowara and Narawara, and emphasizing the atmosphere of the end of the eastern land. 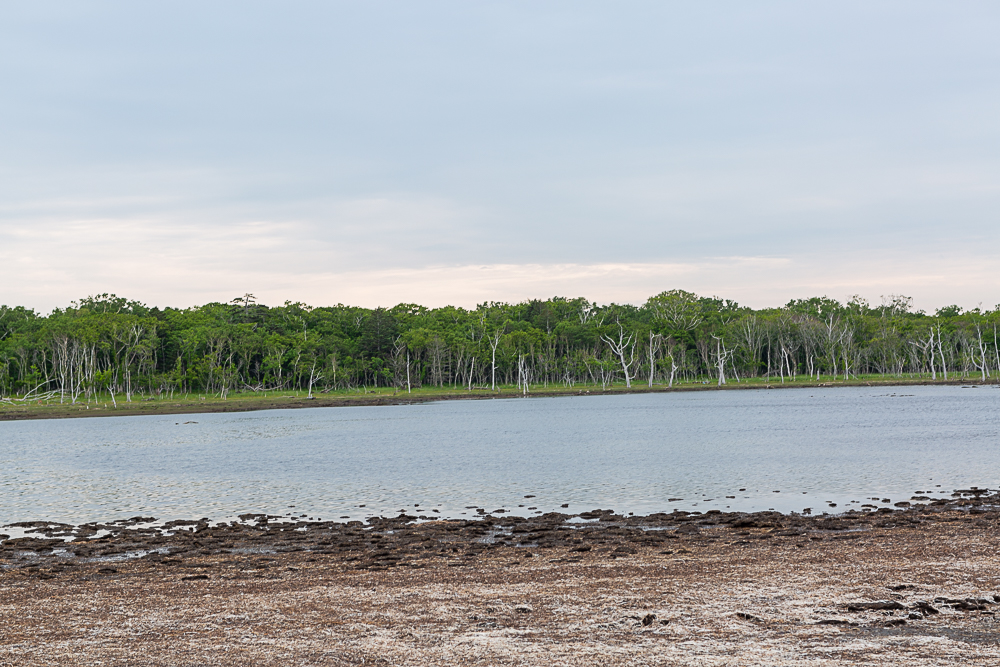 “Narawara,” located almost in the middle of the Notsuke Peninsula, is a place where oak trees have died by withstanding seawater erosion. 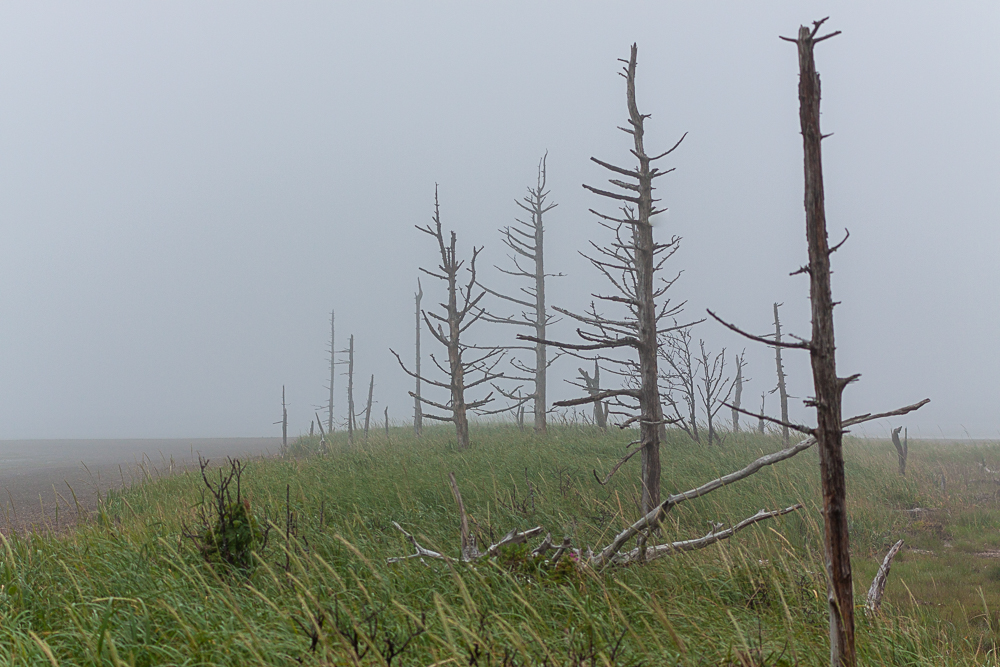 The Todowara area where the fir trees continue to wither from erosion. There is a walking path from Notsuke Peninsula Nature Center to the Todowara area.

The Kunashiri Island and the following Kuril Islands lie before you, only 16 kilometres away. Notsuke Peninsula is the closest coast to the main island of Kunashiri which served as a hub between the main island of Hokkaido and the islands across the Nemuro Strait. According to the ruins and materials surviving today, we can trace the constant movement of people and goods, and the sharing of culture from the Jomon period to Edo period. From Kunashiri Island continues to Etorohu Island which lies further east in the Kuril Island chain Further ahead is the Kamchatka Peninsula, which is backed up by the Russian mainland. 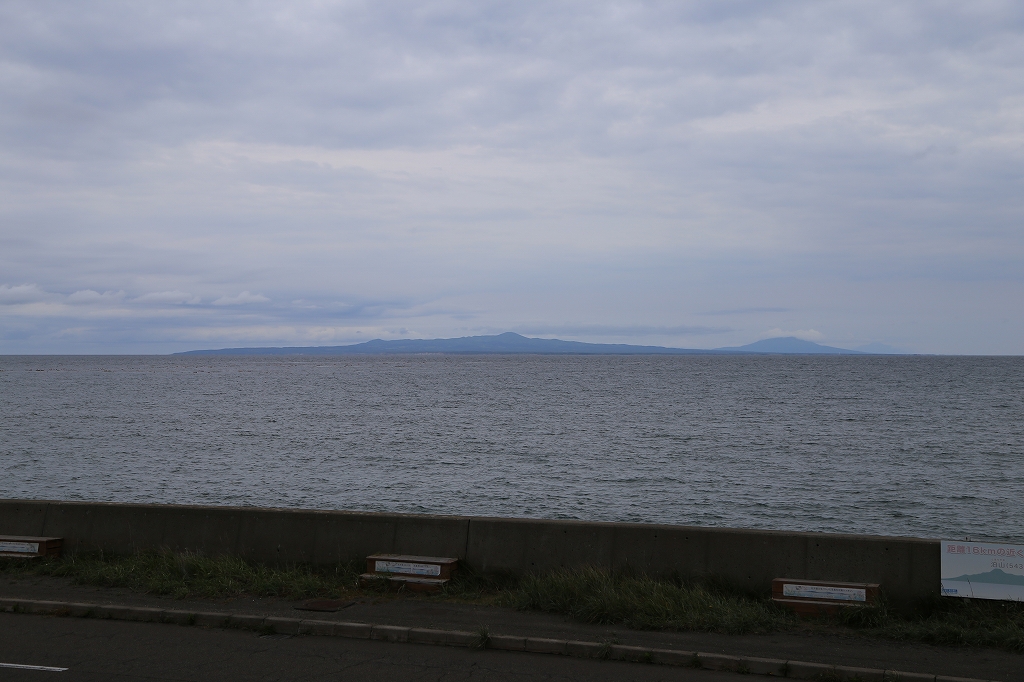 Notsuke Peninsula was as an open gate to the east was the entrance to a vast world. That it can't be imagined from its current wild landscape, is telling that it is a place which has been exposed to drastic changes in history. Also, salmon being the largest product of the Nemuro Strait coastal area has changed roles with the times and played a part in its history.

The land of Menashi linked to the Kuril Islands

There are ruins from the Edo period at the end of the 18th century at the tip of Notsuke Peninsula. It is ruins of Notsuke Tsukoya(the place that people take a rest and stay or change their horses while Hokkaido was developing) established by the Edo Shogunate as a relay point to Kunashiri Island in 1799. A manager resided there and also there are accommodations and warehouses for people travelling across the Island. They would change ships on voyages here because the water is shallow on the north side coming from Notsuke Peninsula. It is said that there was an entertainment district called Kiraku at the tip of Notsuke Peninsula but according to recent investigations in recent years, it is now thought to have been ruins of a transit point and surrounding simple lodging houses for herring fishermen. 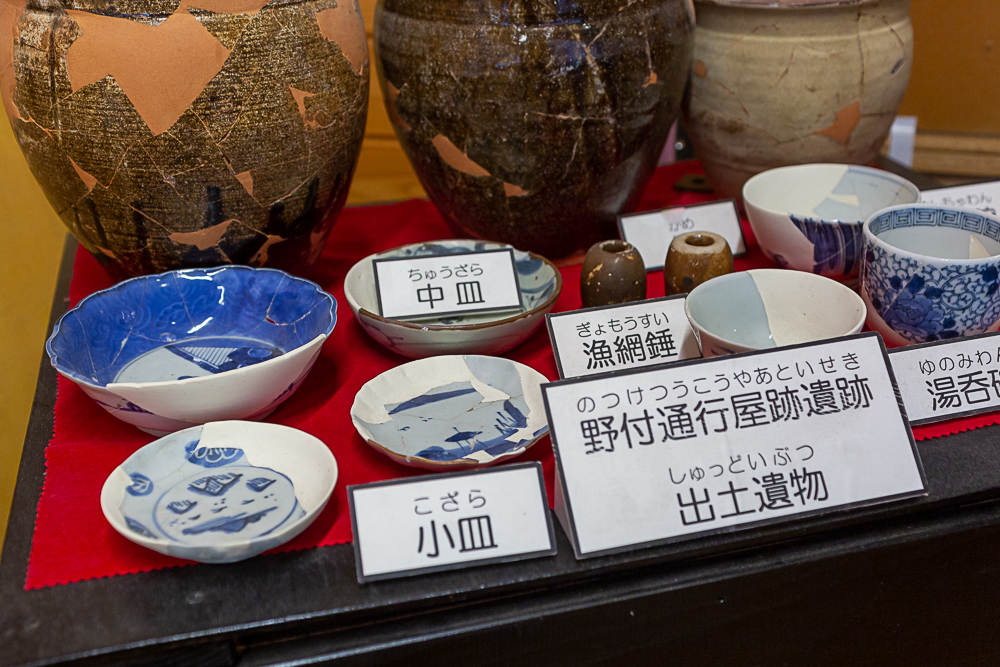 Daily essentials such as excavated dishes and bottles displayed at Notsuke Peninsula Nature Center. These things might have been associated to the Kiraku folklore.

Beyond Notsuke Peninsula where is from Kunashiri Island and Etorofu Island to the Kuril Islands had been an important trading route for Ainu people long ago. The Nemuro Strait area including current areas such as Rausu, Shibetsu, Betsukai and Nemuro (all facing Kunashiri Island) was called “Menashi” which means the East Side. Menashi Ainu were trading with Kuril Ainu, exporting lacquerware, silk, cotton and iron pots that were had via the Matsumae Domain (an Edo period Japanese domain in southern Hokkaido), importing sea otter leather, eagle fur and other goods of the Kuril Islands and Kamchatka Peninsula.
Trade goods such as sea otter leather and eagle fur were prized among Wajin (ethnic Japanese), it was important for the Matsumae Domain because the economy of Matsumae was supported by goods coming from Ezo (modern day Hokkaido). We can see a description that one of the trade goods was dry salmon. Matsumae Domain, who had the sole right to trade with the Ainu, had acquired the products of Russia and Northern Kuril through trade. Afterwards, they established a trading post on Kunashiri Island.
After that, they started to leave trade to merchants, Hidaya Kyubei who took Menashi area produced salted fish to use a large amount of salmon that swam upstream on the Nishibetsu River in Betsukai town. We can know that Salmon was among the principal trade goods as a product of Ezo. 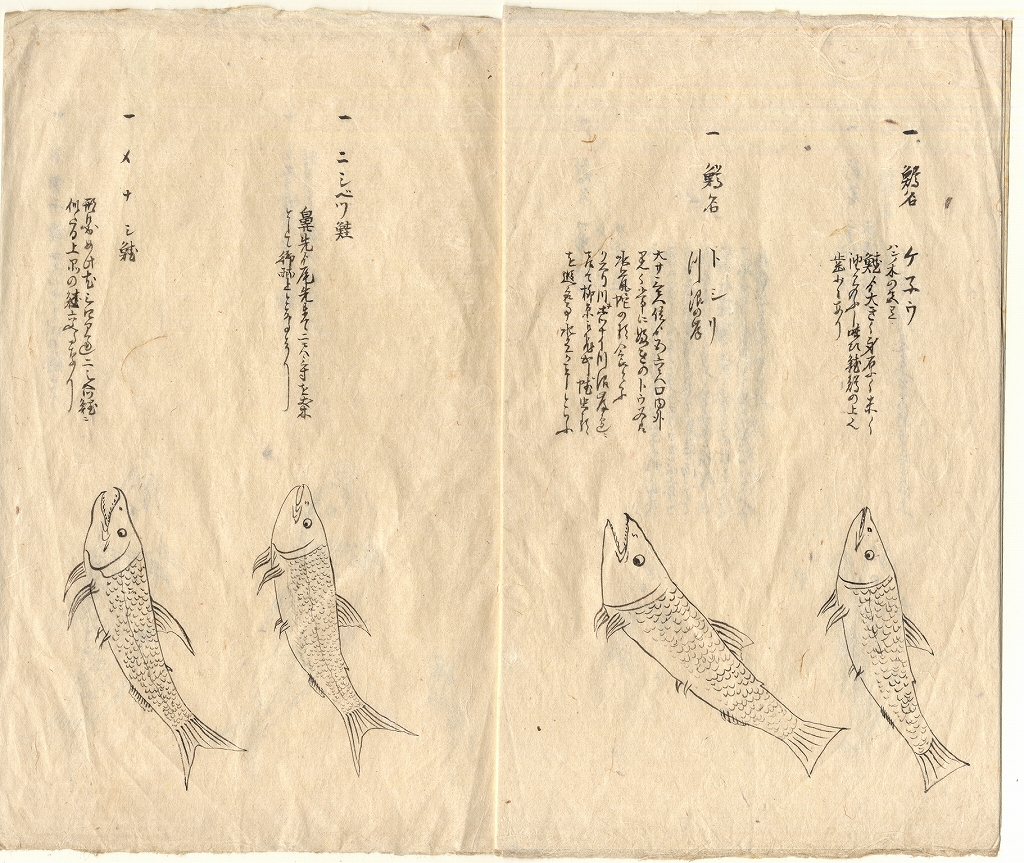 A document showing that salmon and trout along the Nemuro Strait have been branded since the Edo period. It explained its characteristics and taste. (Owned by Kaga House Archives) 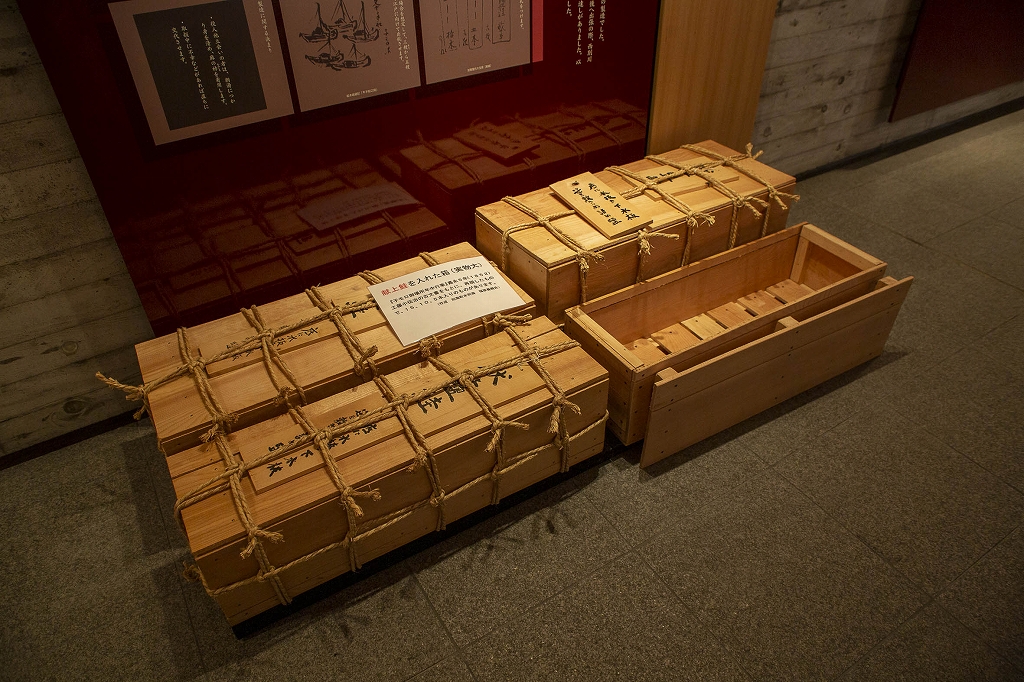 The boxes of a full-size salmon offering box reproduced from the old document description. A draining board is placed in the bottom and bamboo grass spread over, stuffed with salt and then transported by ship. (Owned by Kaga House Archives)

But in 1789, the poor and immoral, often violent treatment of Ainu people by the managers of the Hidaya area stirred an uprising known as the Kunashiri Menashi War". While enduring the hard labor of making salmon fertilizer the Ainu were unable to preserve their own salmon food source for winter, and many lives were lost as a result. This occurred from middlemen to laborers. These incidents concerning the salmon trade shows how the Ainu people were gradually changing their position.

The end of the eighteenth century could be described as a time of turbulence for the land of Menashi. Russia started southward in search of sea otter fur in the Kuril Islands, Ainu people of the northern islands were assimilated into the Russian Empire. The Shogunate also felt a sense of crisis as foreign ships, which frequently visited Ezo, directly controlled Eastern Ezo (Pacific Ocean side) for 7 years from 1779. The Shogunate directly managed trade and, at the same time, tried to develop the Kuril Islands by claiming it is a territory up to Etorofu. At the time, Tsukoya was established in the Notsuke Peninsula. The Nemuro Strait coast was the foremost line against Russia from the mainland of Ezo, which made the Notsuke Peninsula a foothold to the Kuril Islands.
In the previous year of 1798, Shigezo Kondo acted as a government agent in a large scale survey of Ezo. While on a survey of the Kuril Islands, he planted a marker in the ground on Etorofu Island declaring the region as a Japanese territory. It is known from the diary of an attendant that he had stayed at Notsuke on his return home after that. Shigezo carefully surveyed the Kuril Islands and made a map in 1800.
The two-piece map shows the names of places such as Ezo, Sakhalin, the Kuril Islands, the Kamchatka Peninsula. The detailing of the Kuril Islands that he recorded with obtained information from Rashowa Island Ainu is quite impressive. Shigezo also developed an Etorofu rote to Kunashiri with Kiheiji Takadaya who was a shipping agent. After that, Kiheiji Takadaya opened fishing ground on Etorofu Island, and established trade in Nemuro, Kunashiri and Etorofu.

In the year of 1858, Takeshiro Matsuura was a northern explorer who carried out the 6th survey of the Ezo region visited Notsuke Tsukoya. He held the Ainu interpreter Denzo Kaga in high esteem. So after returning to Edo, he sent works in exchange, such as his own books and maps. And while sending his works, he entreated in a letter, "I want you to send one barrel of salmon roe this year as well. " This is a unique episode about Takeshiro who was familiar with the value of salmon on Nemuro Strait coast, such as the Nishibetsu River.
Notsuke Peninsula has constantly led people across the strait while changing roles from a gateway of trade to that of defence and development. It is understood that the role of the Notsuke Peninsula has persisted since periods of ancient northern culture. As for the people who traversed the strait, it was salmon that inspired them across. 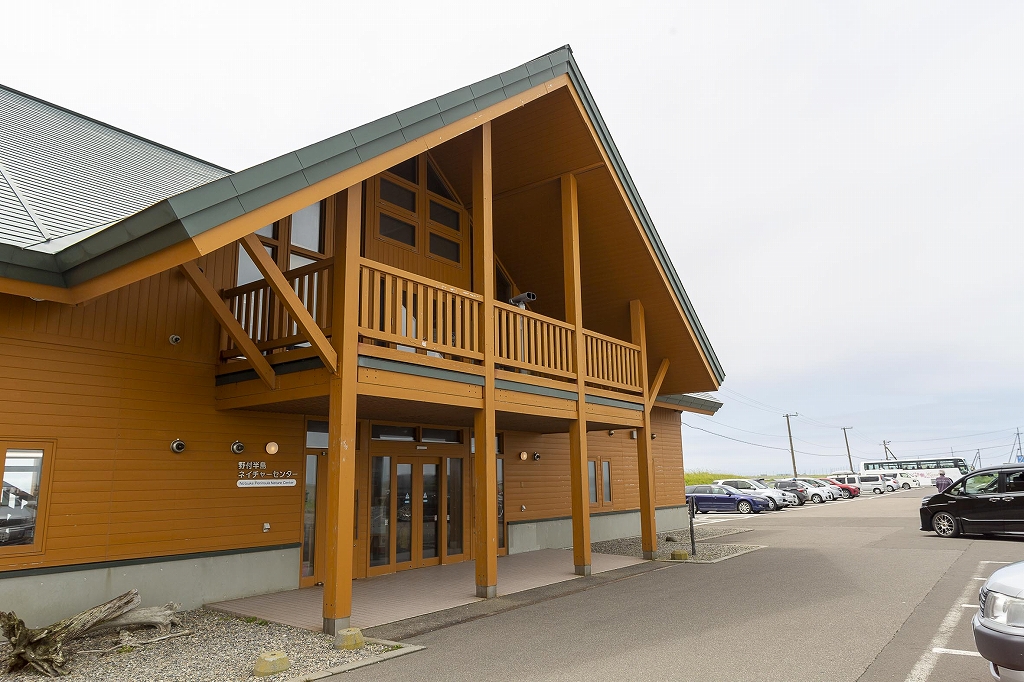 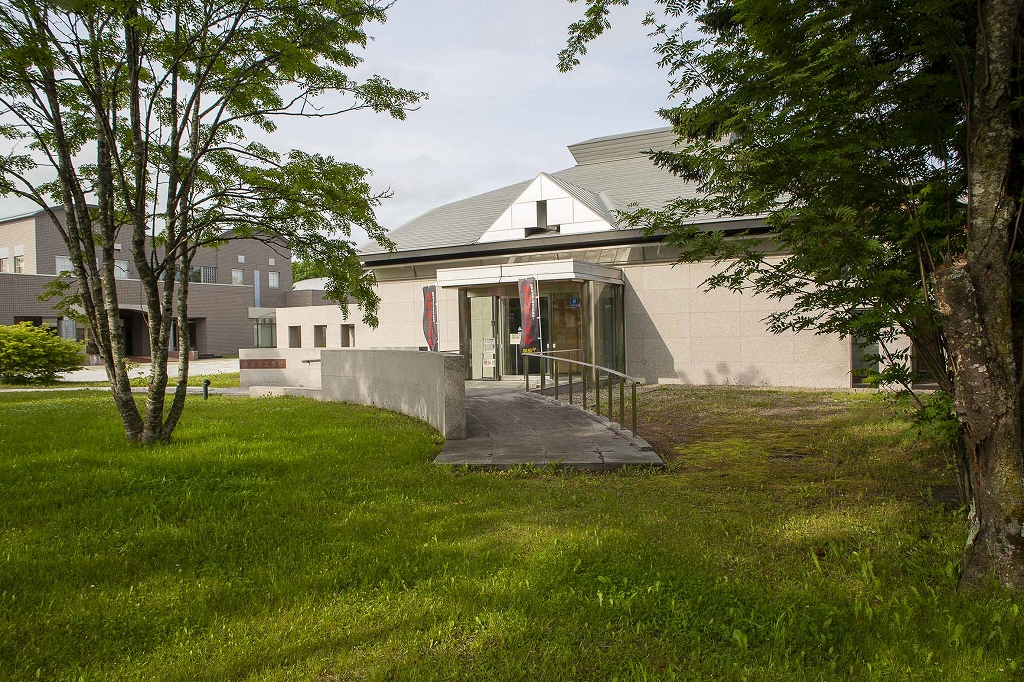 *Shibetsu residents are responsible for translating this feature into English.