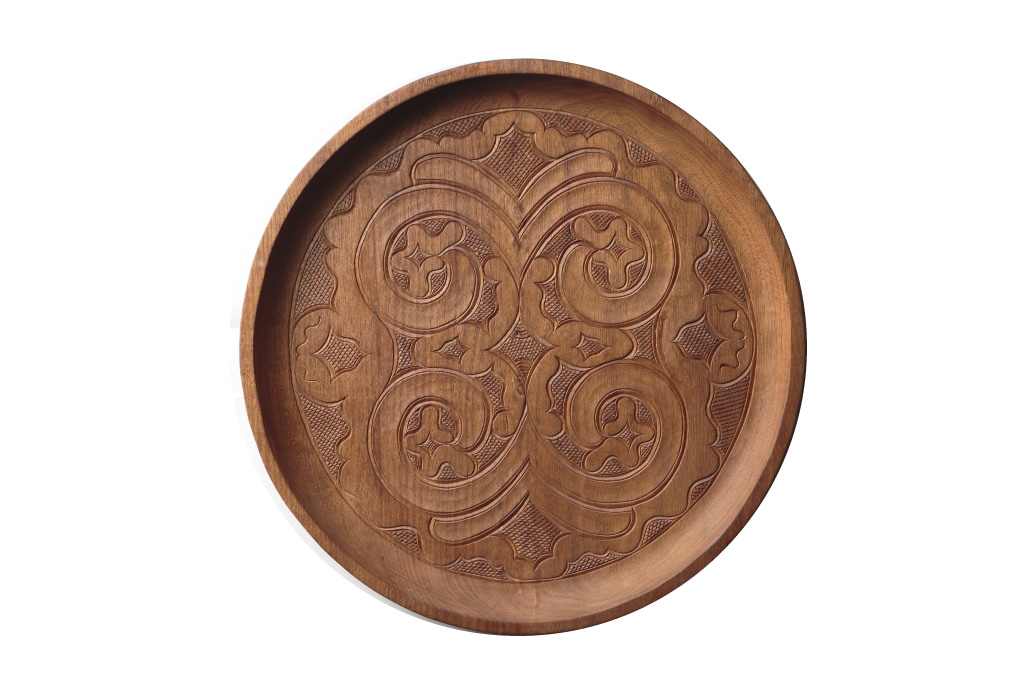 An ita engraved by Kaizawa Toru, originally made by his great-grandfather, Kaizawa Utorentoku (property of the Biratori Municipal Nibutani Ainu Culture Museum)

The Nibutani-ita and Nibutani-attus have been officially designated as traditional craft products by Japan Ministry of Economy, Trade and Industry. Let’s begin our visit to Nibutani Kotan with the tale of the Nibutani-ita
Photographs by Tsuyuguchi Keiji
Translation by Xene Inc.

The tradition of Nibutani-ita has been passed on since ancient times in the Saru River basin region. The traditional crafting method of these flat, wooden trays is still practiced today, predominantly in the Nibutani area of the township of Biratori. Throughout the history of Ainu traditional culture, we can see a strong inclination to decorate day-to-day tools — such as blade sheaths, clothing, and loom paddles — with beautiful patterns.
The Nibutani-ita are made of woods such as katsura and walnut. The most distinguishing feature is Ainu patterns carved to cover the entire top face.
In March 2013, the Nibutani-ita became Hokkaido’s first ‘Traditional Craft Product’ officially designated by the Japan Ministry of Economy, Trade and Industry. There are now 253 traditional craft products designated nationwide, and Hokkaido’s only two are the Nibutani-ita and Nibutani-attus.

The first reference to Nibutani’s ita in historical documents is during the bakumatsu, the final years of the Tokugawa shogunate (1853-1867). Among the products presented by the Matsumae domain to the shogunate, there are records of semicircular and circular trays from the Saru River basin. The selection of these trays for presentation to the shogunate indicates a very high level of quality, suggesting that this region must have a long history of producing such crafts.

Later, in the 1890s, Kaizawa Utorentoku and Kaizawa Uesanashi sold crafts such as trays and saucers. Biratori Choshi (‘History of Biratori Town’, 1974) documents that these men sold their crafts in Sapporo. Today, Kaizawa Uesanashi’s crafts are kept at the Biratori Municipal Nibutani Ainu Culture Museum, where you can observe the similarities in patterns and style between these crafts and present-day works.

In 1904, the American anthropologist Frederick Starr visited Japan to conduct research on the Ainu. The materials collected by Starr included Nibutani-ita. 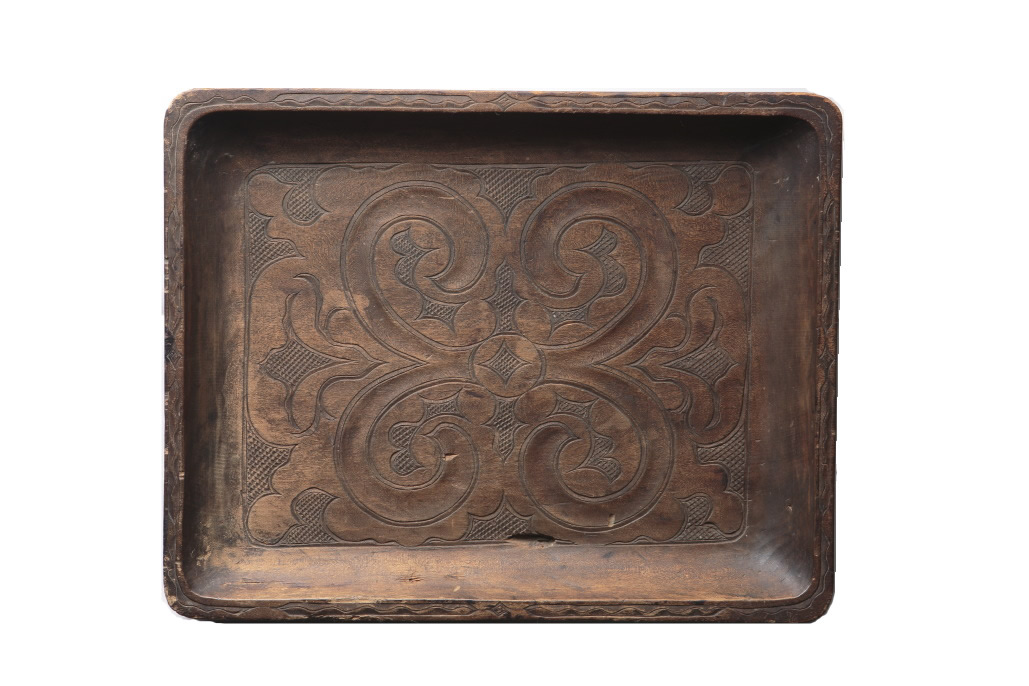 Given Life by a Tourism Boom

The current ita producers are the fourth generation, who learned from Utorentoku. As they honed their techniques as youths in the 1960s and 1970s, tourism boomed throughout Hokkaido. National Route 237, which passed through the center of Biratori, was a major arterial road linking central Hokkaido to northern and eastern Hokkaido, and led many tourists to experience Biratori, a town which still had distinct features of Ainu culture.

To fill a growing demand for tourist souvenirs, locals of Biratori produced ita, as well as other carved wood crafts. Until then, Nibutani’s carved wood crafts had been folk crafts, but this development propelled these crafts into a new role as tourist souvenirs. It is thought that this tourism boom unleashed the potential of these folk crafts as a local artisanal industry, and resulted in the handing down of traditional techniques, training of future generations of artisans, establishment of product distribution methods, and the like. Craft creators were influenced by the changing times, and began to innovate designs that were not constrained to existing tradition. Eventually, new techniques and designs were introduced, enabling these crafts to exceed the appearance and quality originally envisioned for souvenirs.

The Present and Future of Ita

Nowadays, the Nibutani Craft Cooperative Association has a central role in the production and sale of Nibutani-ita. To an artisan, the ita is like a painter’s canvas. To produce an ita, the artisan envisions and freely develops designs for the flat face, combining their own personality with the traditions of this folk craft.
The beautiful patterns engraved into these ita reflect both the history of Nibutani and the heritage of Ainu culture. Each line of the patterns feels alive with a graceful energy.

* This article is excerpted and arranged from "Nibutani-ita: a Traditional Craft Product", (Production: Northerncross), issued by the Nibutani Craft Cooperative Association in 2015. 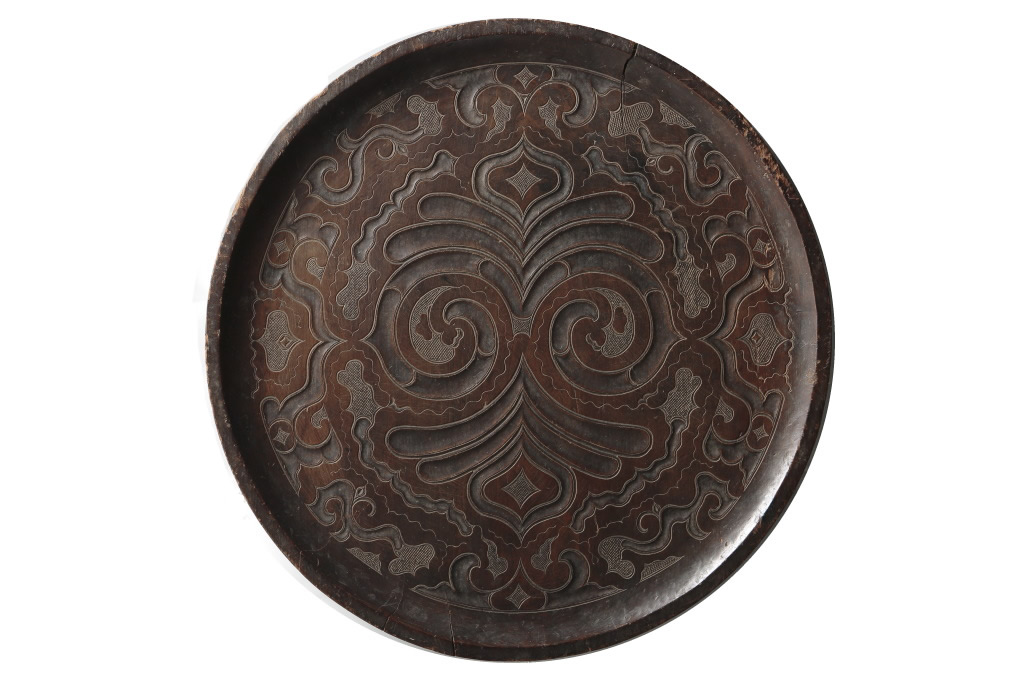