Architecture that continues to think – 1 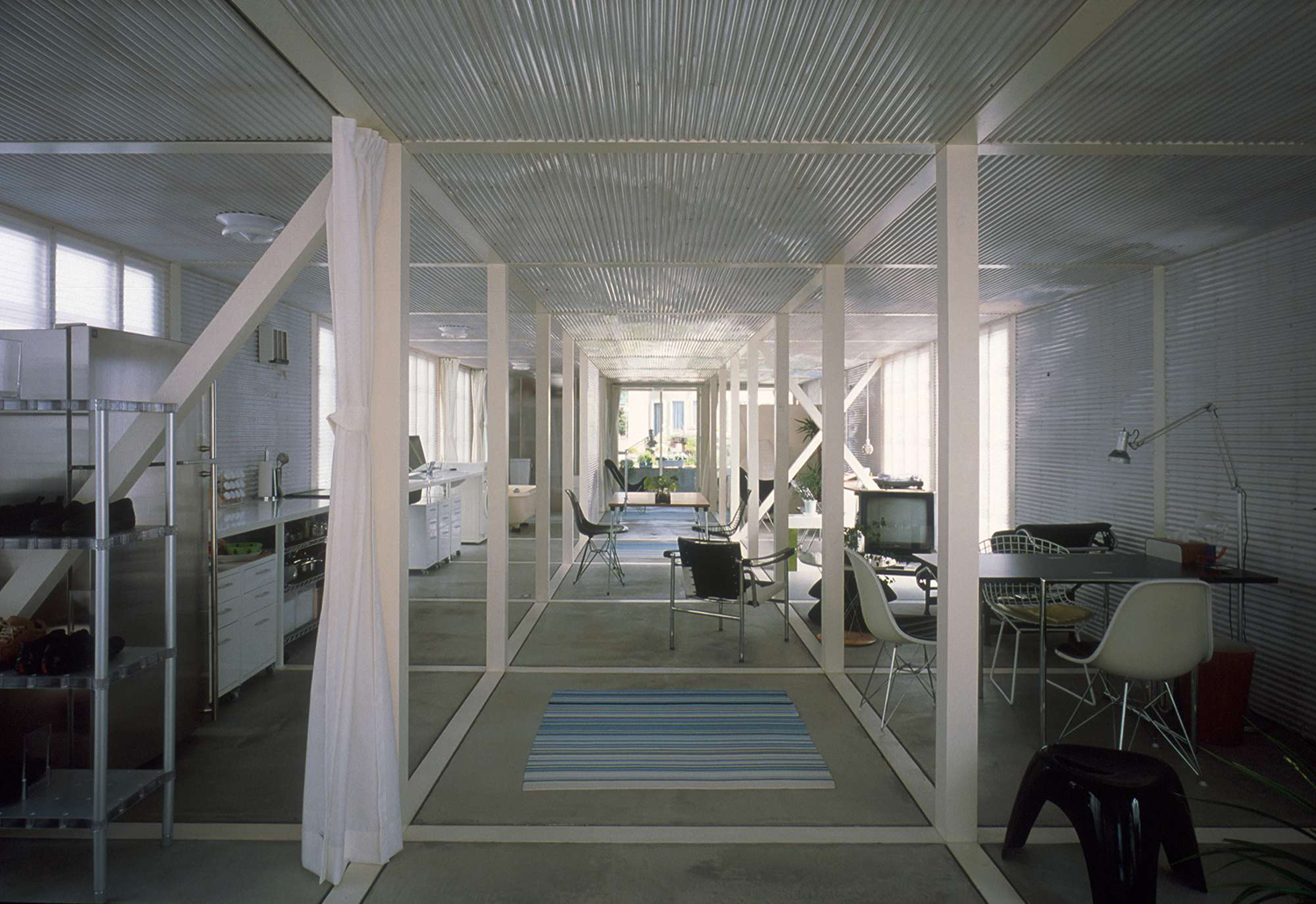 Igarashi Jun is an architect that continues to design mainly residences in Saroma and Sapporo. The interviewer is urban planner Sakai Shuji. This is a conversation between the two, who have known each other for quite some time.
Words by Ishida Mie
Photographs by Kurose Michio
Translation by Xene Inc.

Sakai: It would be good to get some hints, including various things, to indicate what kinds of lifestyles should we be aiming for in Hokkaido in the future. What prompted you to become an architect?

Igarashi: The family’s business was a building contractor, and that was a big influence. My grandfather was a master carpenter so I was familiar with construction. The family home was extended and renovated about three times and my grandfather asked me, as a child, where the stairs should be. The stairs were made where I said.
One day, the wall suddenly disappeared, the scenery changed and something completely different was created. That experience was so exciting and interesting.

Sakai: Those strange feelings and the concept of re-assessing preconceptions and common sense from their foundations are linked to your attitudes to design. After that, how did you come to study architecture?

Igarashi: My family home was in the town of Saroma in eastern Hokkaido and, after leaving high school in Kitami, I attended an architecture vocational school in Sapporo. Because I grew up in a rural area, I had a strong admiration for stylish things. When I became a high-school student and started visiting fashionable shops in Kitami, I realized there were cool shops and not so cool, ordinary shops. That’s where I had these vague thoughts that interior designers are cool, but thought that it would be difficult to study architecture after studying interior design first, so I searched for an architecture school and enrolled there.

Sakai: Was that where you encountered Ando Tadao’s architecture?

Igarashi: Not an encounter, but a reunion. My friend had Ando Tadao’s book and while I was flicking through it during the lunchbreak, there was a connection with “the person from that time” I was watching a TV documentary when I was an elementary school pupil.
I remembered how surprised I was when a house featured on the program had some sort of courtyard inside the house, which looked fun. That’s when I definitely thought I wanted to be an architect. 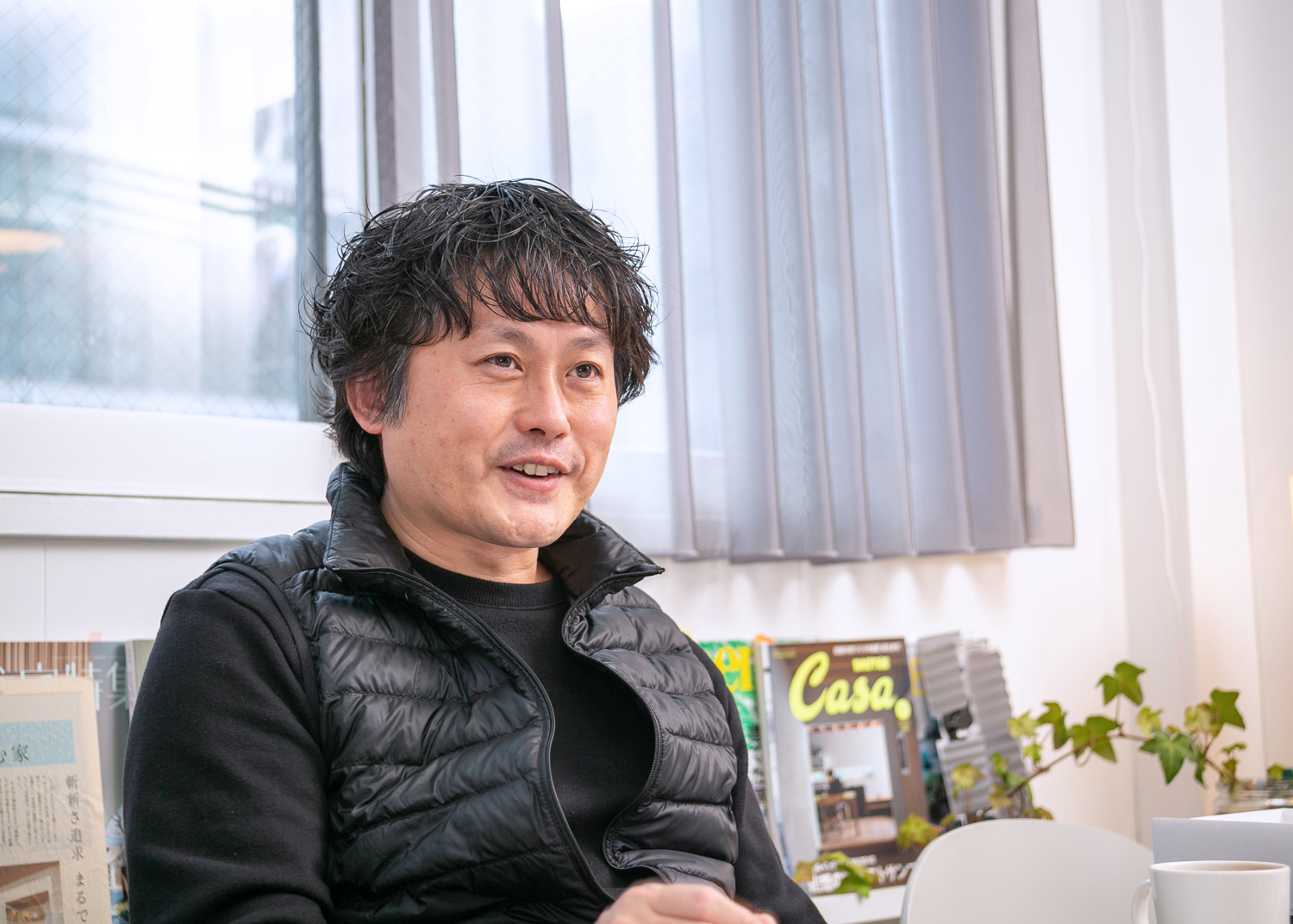 A little quirky right from the start

Igarashi: At vocational school, only the design lessons were fun. My designs were a little quirky right from the start; I just drew square things and long, flat things.
I can’t draw room layouts of standard houses but those around me draw standard designs with living rooms and kitchens. I always wondered “Why does everyone do such boring designs?”

Sakai: When you graduated and found work at an architect’s office in Sapporo, was that a recommendation of the school?

Igarashi: The company they said they could recommend me to was a house-maker’s consulting company; after learning how to draw the plans I could draw them unconsciously. For five-and-half years from then until I quit, I drew plans while fantasizing about how it would be better if we were to do this or that. I used to spend my lunchbreaks looking at all the architecture magazines in the office. The one that influenced me most was the Shinkenchiku Jutaku Tokushu (housing periodical). Even now I can never forget the impact Sejima Kazuyo’s PLATFORMⅠhad on me at the time. It was completely different to everything else. Her second creation, PLATFORMⅡwas even more incredible and I became a fan.

Sakai: I think the transparency of Sejima’s architecture has something in common with your architecture. 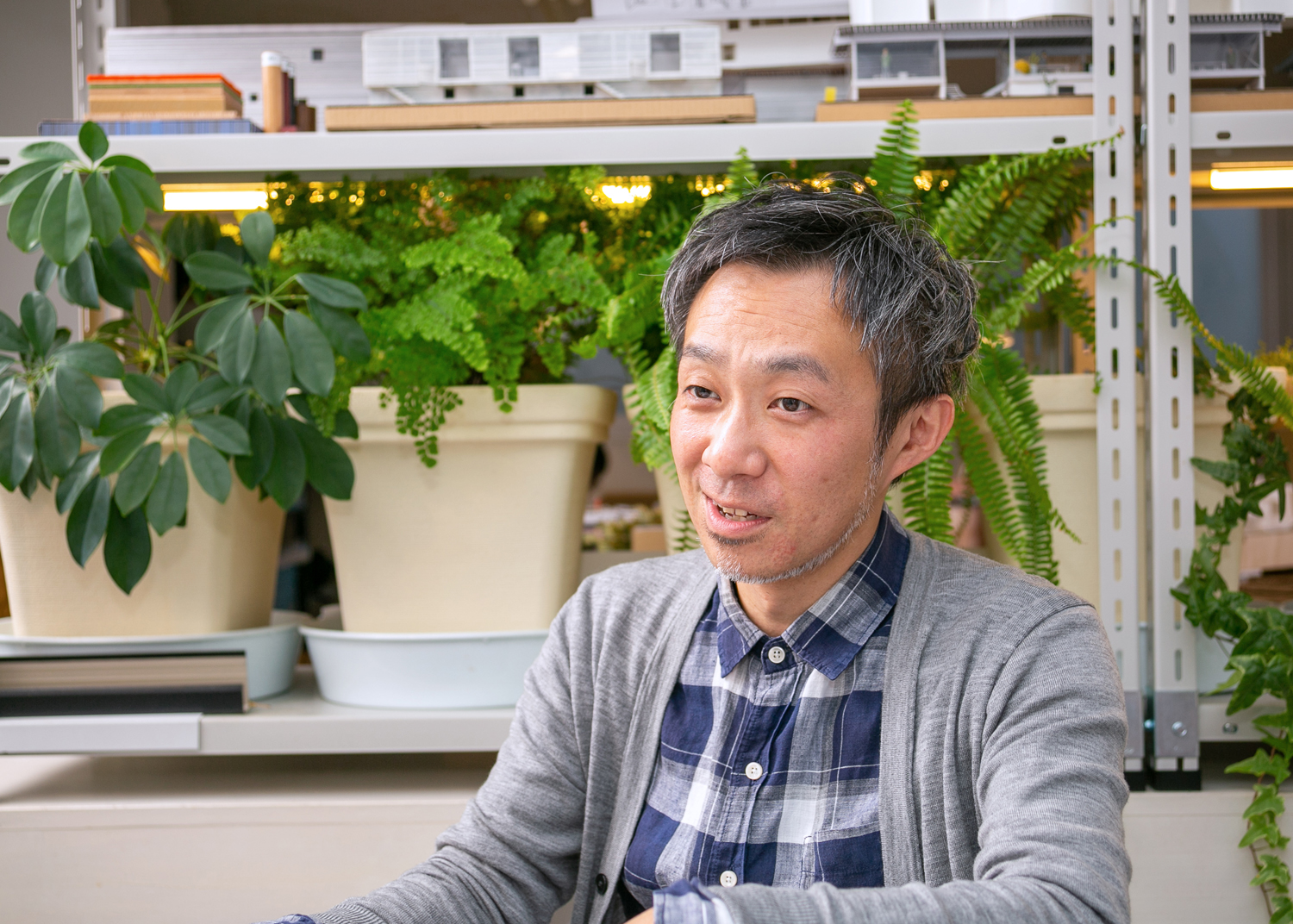 Sakai Shuji
Born in 1975. After graduating university, worked at an urban planning consultancy and from 2007 began working at Northerncross Co., Ltd. In 2019, Sakai – a first-class architect – established SS Keikaku, Inc.

I thought something good had been created

Sakai: So, you subsequently quit that office and returned to the family home?

Igarashi: When I became 25, I was able to take the first-class architect’s exam so I thought I would quit my job and study. The office of the family building business was to be rebuilt so I was compelled to start designing it. My father okayed the 3rd proposal, work began and, in 1996, my first project “Collection of white boxes” was completed. This received an “Encouragement prize” at the Architectural Institute of Japan’s Hokkaido Architecture Awards. In 1997, I set up my own architectural design office in Saroma and built homes for my friends and the like.

Sakai: From then, you turned to designing your own house in Saroma, “Rectangular Forest”. It’s incredibly characteristic but the windows have almost no function; how did the “architecture closed from the outside looking in” concept come about in which translucent polycarbonate is used to let in light?

Igarashi: Because the grounds of “Rectangular Forest” face the road in Saroma with the most amount of traffic, and is surrounded by lots of other buildings, I thought about not worrying about being seen from the outside. I wanted to create a space that was closed yet at the same time let in light comfortably. While designing it, I was adamant I would receive the Yoshioka Award *1 for it.

It was completed in 2000 and is really comfortable to live in. I thought, as a form of architecture, I’d created something new. I notified the editorial department of the Shinkenchiku [architecture magazine] but didn’t receive a reply. When the next building was completed, too, I notified them again and I got a reply from the editor at the time, who said “We’ll be doing a piece on Hokkaido soon, so I’ll pop in to see you.”
I went to pick him up from the airport and showed him all the buildings I could, and spent half a day explaining things. In the end, he said “It’s the first time, so to start with we’ll just feature your own house.” I wanted them to feature all of the houses but there was nothing I could do about it. I never went to university and don’t have a pedigree. Those without a pedigree are not treated well at first.
My work was first featured in the December 2002 edition, and when it arrived I was so happy. The following month I got a call from the editorial department to say I had won the 19th Yoshioka Award, which really excited me. That award provided me with the opportunity to meet a variety of people.

*1 Yoshioka Award: A newcomer’s award that’s known as an architect’s gateway to success. Sejima Kazuyo was the winner of the 6th award. 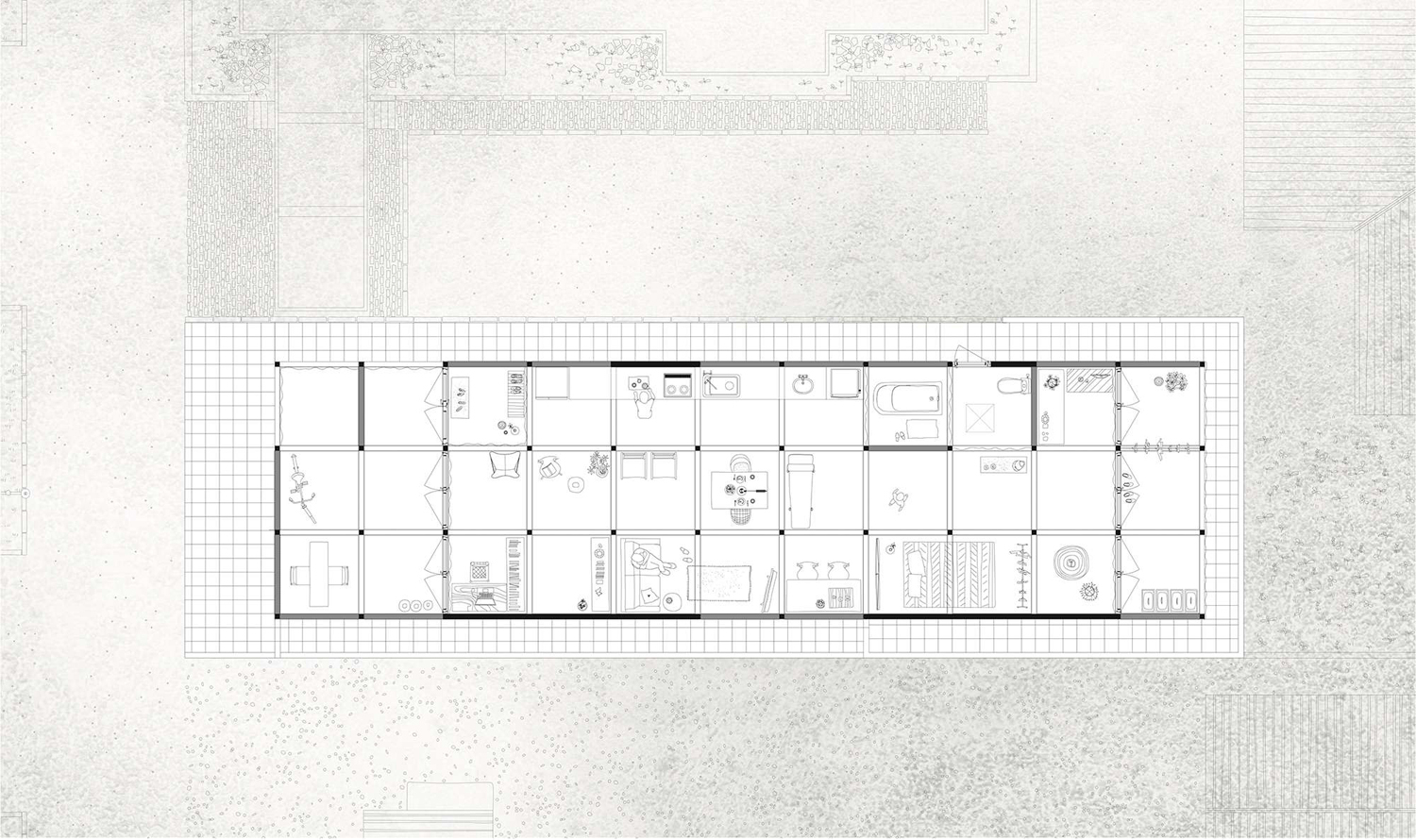