Who Is Community Development For? nociw*, Working In Hokkaido's Smallest Village 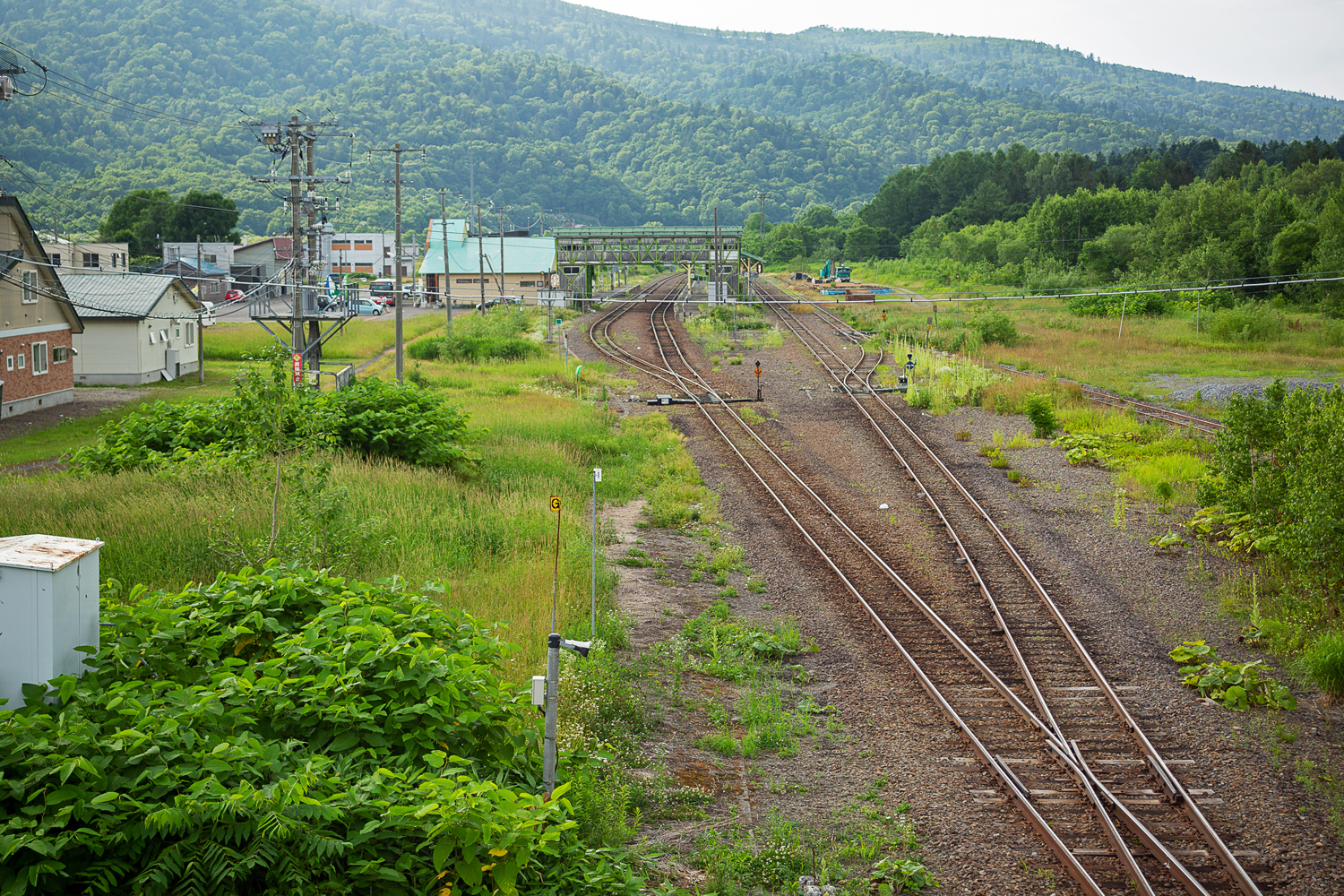 Located between Wakkanai and Asahikawa, Otoineppu once prospered as an important railroad hub.

A group of young people are garnering attention for their community development efforts in Otoineppu, the least populated village in Hokkaido.
Words by Inoue Yumi
Photographs by Kurose Michio
Translation by Xene Inc.

Of the 700 inhabitants of Otoineppu, about 120 are students of the Hokkaido Otoineppu Art & Craft High School. In other words, the actual number of villagers is less than 600.
In this small village, nociw* is working to revitalize the community. It all started seven years ago with the preservation of Kami-Otoineppu Station on the former Tempoku Line.

"Otoineppu used to be a place where the Soya Line and the Tempoku Line split, and many Japanese National Railways employees used to live there. However, the Tempoku Line was discontinued in 1989. The area around Kami Otoineppu Station became uninhabited, and only the platform remained covered with overgrown weeds. I thought that if there was at least a signboard with the name of the station, the memory that there used to be a railroad station and that many people lived here could be passed on to future generations.”

These are words from Yokoyama Takashi, who works in the Community Development Office of the village hall. He asked his comrades to volunteer to cut the grass around the platform. With the help of a village subsidy, he created a station name board and held an unveiling ceremony. 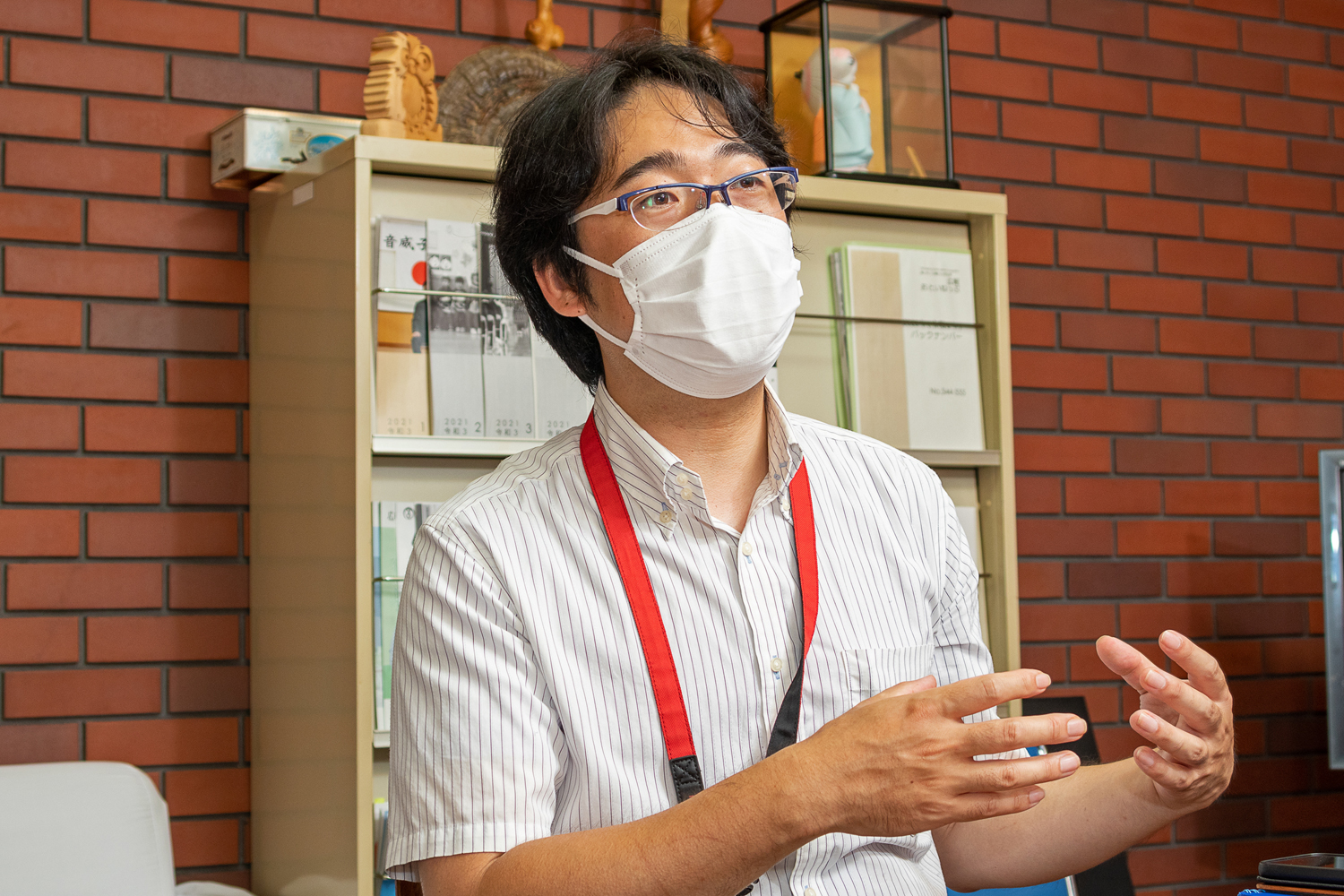 Yokoyama is a train enthusiast who grew up in Otoineppu 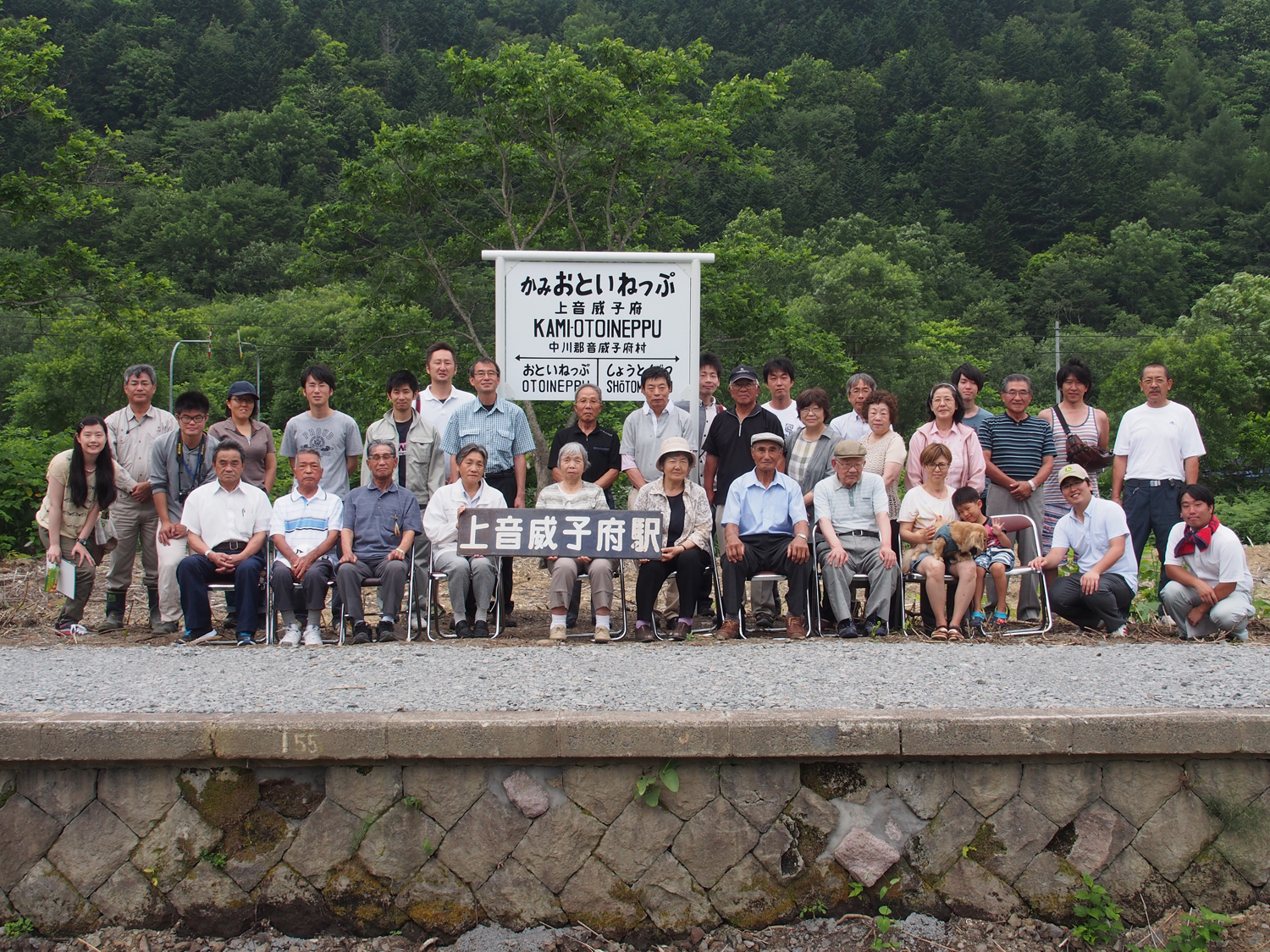 The next project was a call for photography etiquette for people who enjoy taking pictures of trains.
“Otoineppu is known as a good spot for railroad photography. A lot of people come here to take pictures, especially in winter. The reason is the Russel snowplow that runs during the daytime in this heavy snowfall area where snow accumulation can reach 10 meters.”

Amateur photographers are also important tourists for the village. Rather than just asking them to comply with photography etiquette, Yokoyama wanted to convey the village's gratitude for their visit by distributing magnetic stickers.

For several years, they handed out stickers to photographers along the route, asking them to follow the proper etiquette. 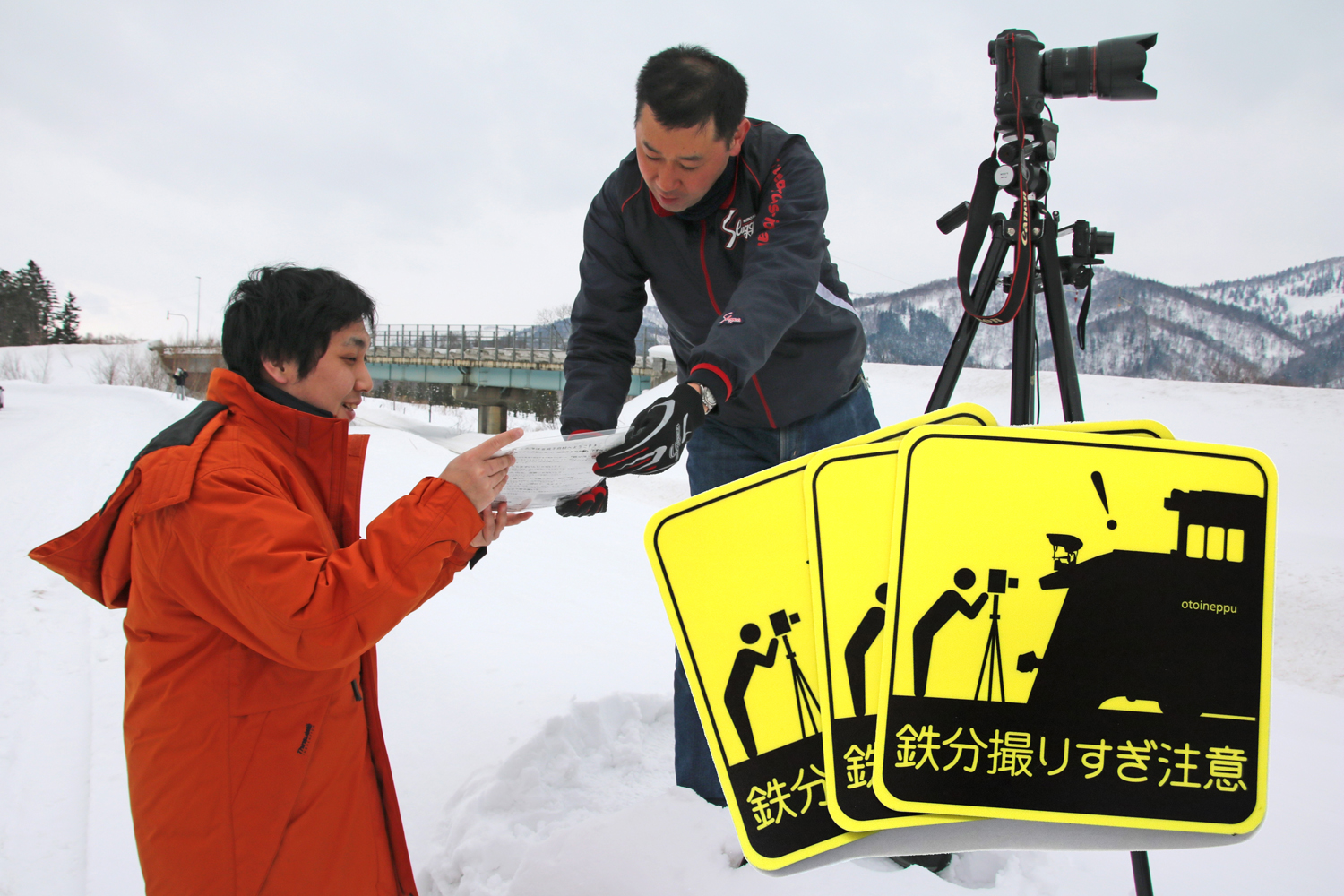 In 2017, they started the Flower Station Chief Project to decorate the station with flowers.
"Three of the four stations in the village are unmanned, and they tend to have a lonely atmosphere, so I hope that by planting flowers, people who use the stations and people looking at them from the train can enjoy them,” says Yokoyama. 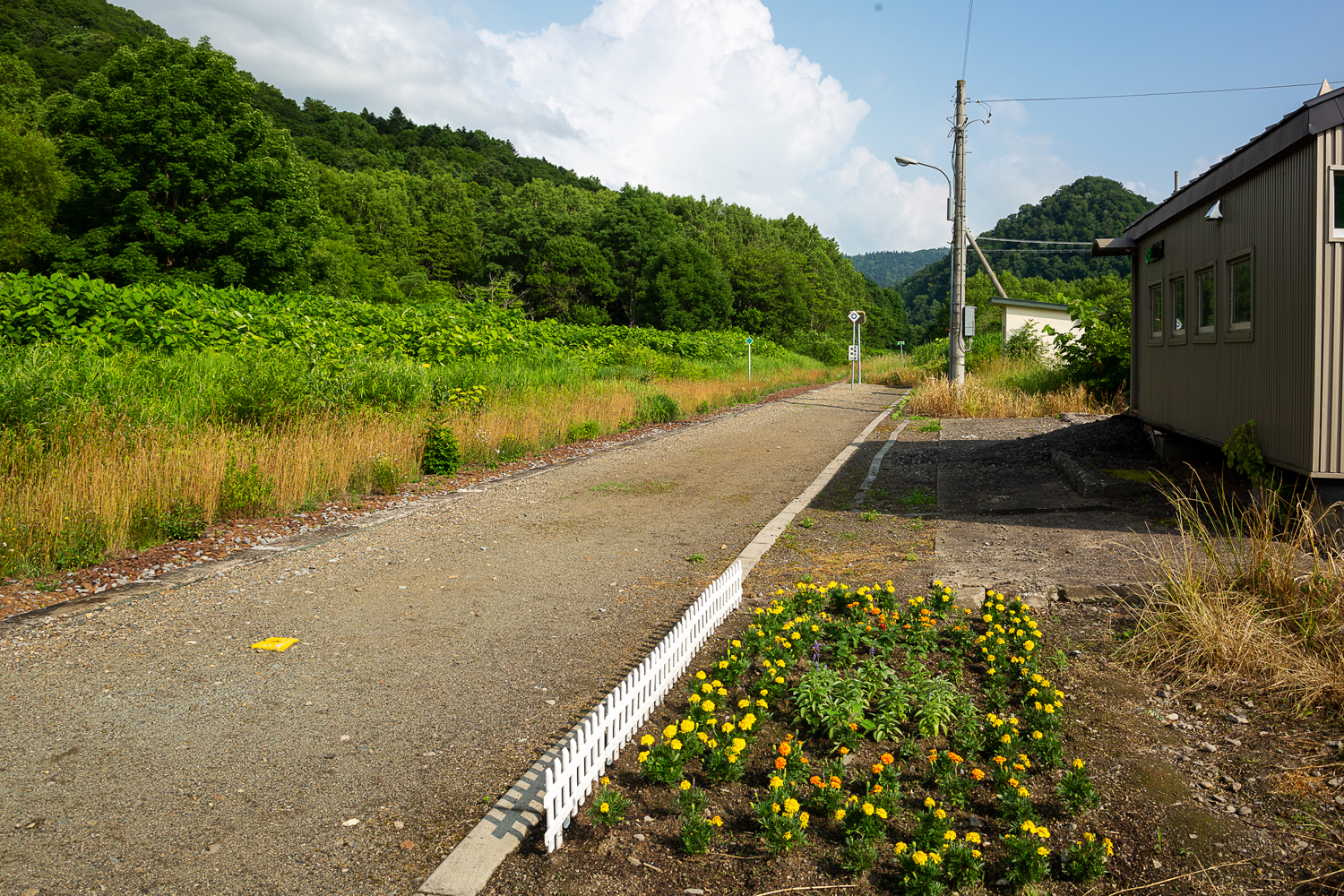 "When I go to plant flowers after 5:00 when work finishes, the insects are amazing," laughs Sato Shiho, a member of nociw*. Originally from Asahikawa, she moved to Otoineppu seven years ago when she got a job at the village hall.

The Flower Station Chief Project is gaining more and more support from local residents and high school students, who are helping with the maintenance and watering. 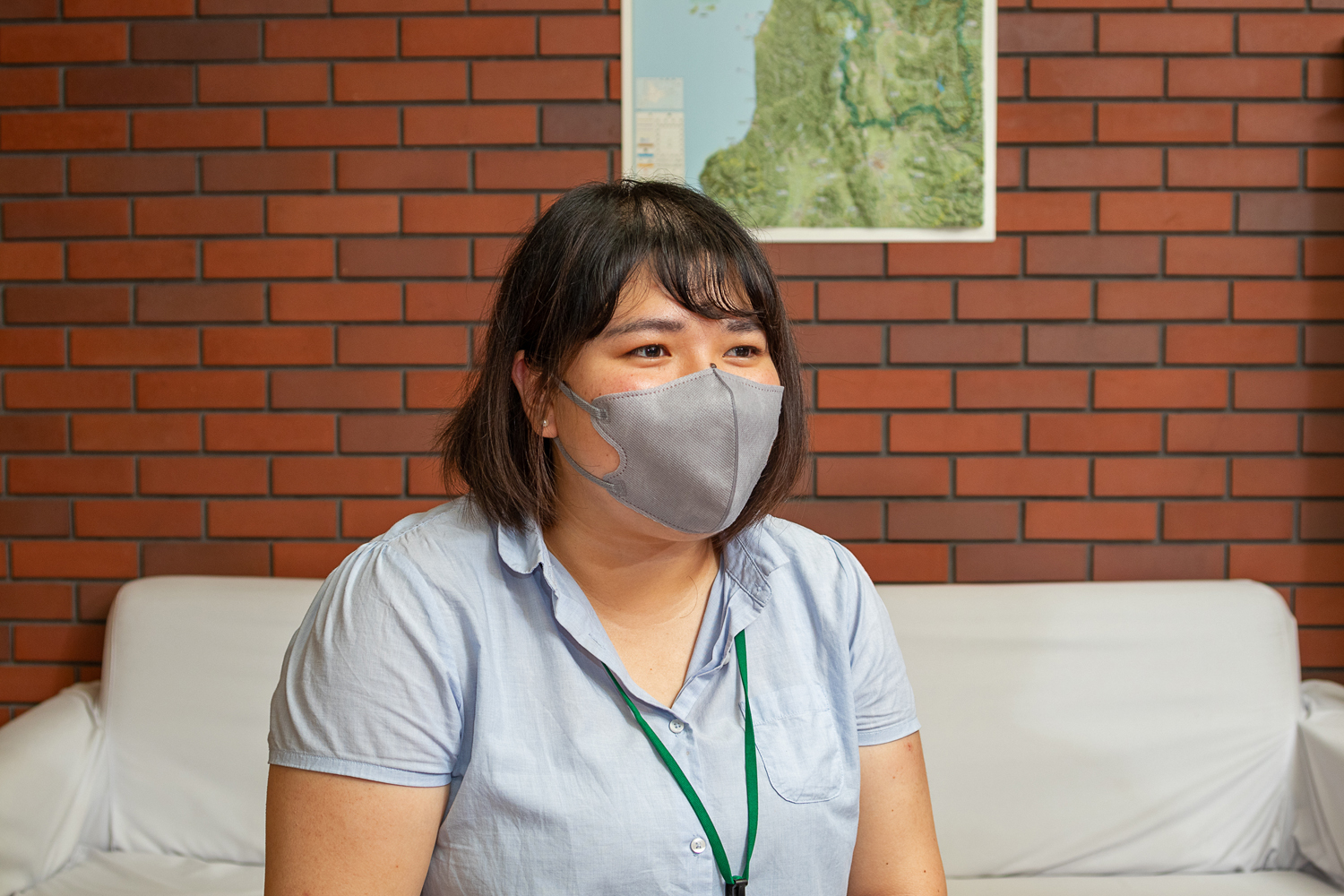 Sato Shiho works in the Industrial Promotion Office at the village hall, and took over as president of nociw* from Yokoyama in 2020.

There are always about ten members who agree to participate in these projects, and although there are some changes due to job transfers and other reasons, other than Yokoyama, who is in his thirties, they are all in their twenties.
From 2017, the members discussed and decided to call the group nociw*. By combining the asterisk (*) symbol, which looks like a snowflake, with nociw, which means star in the Ainu language, the group decided to incorporate the idea of having fun by mixing in the appeal of the village.

The scope of the project has been expanding. One of the most popular events was the Oto-bar in June 2019, organized by Sato.

"The former kindergarten building was going to be demolished, so we wanted to do something before it was destroyed.”

They ordered craft beers and wines from all over Hokkaido, and prepared cheeses and sausages from nearby cities and towns. After advertising the event, an amazing 200 people showed up. 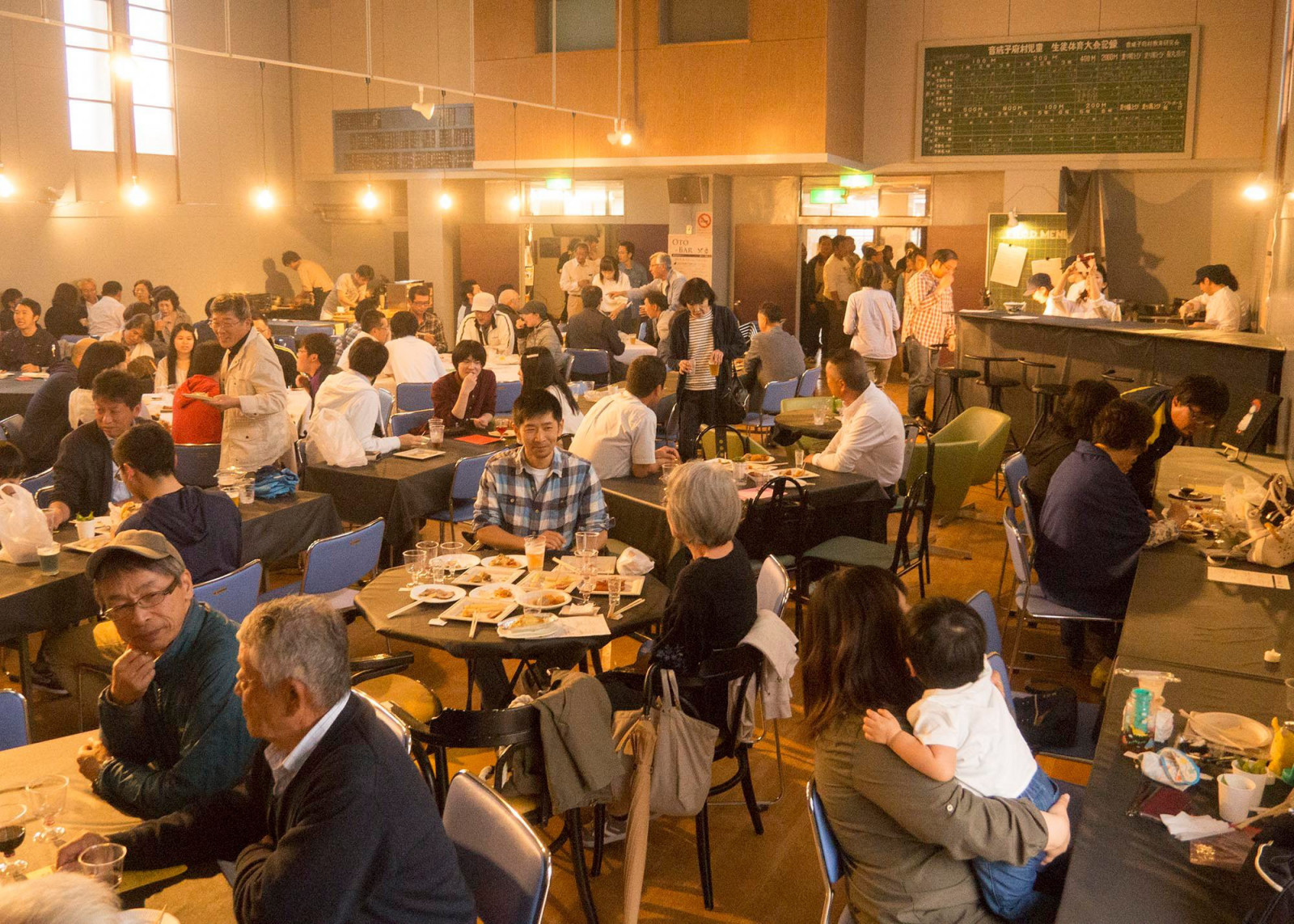 Seeking cooperation over a wide area

nociw*'s activities can be summed up as community development. However, perhaps one of its most distinctive features is that they do not limit themselves to the village. They also seek to collaborate with surrounding cities and towns.
One of the most notable examples is the hospitality project for JR Hokkaido's sightseeing train Kazekko Soya-go which went into operation in the summer of 2019.

"People often wave small flags at train stations to welcome tourists, but I thought it would look good if we used colorful Japanese hand towels to welcome them," said Yokoyama.

Yokoyama and his colleagues took time off from work to visit Wakkanai, Horonobe, Nayoro, Kembuchi, Wassamu and other municipalities along the Soya Line as a volunteer group and proposed a hospitality project. After asking for cooperation in a wide area, they saw people holding out colorful Japanese hand towels all over the line to welcome tourists. 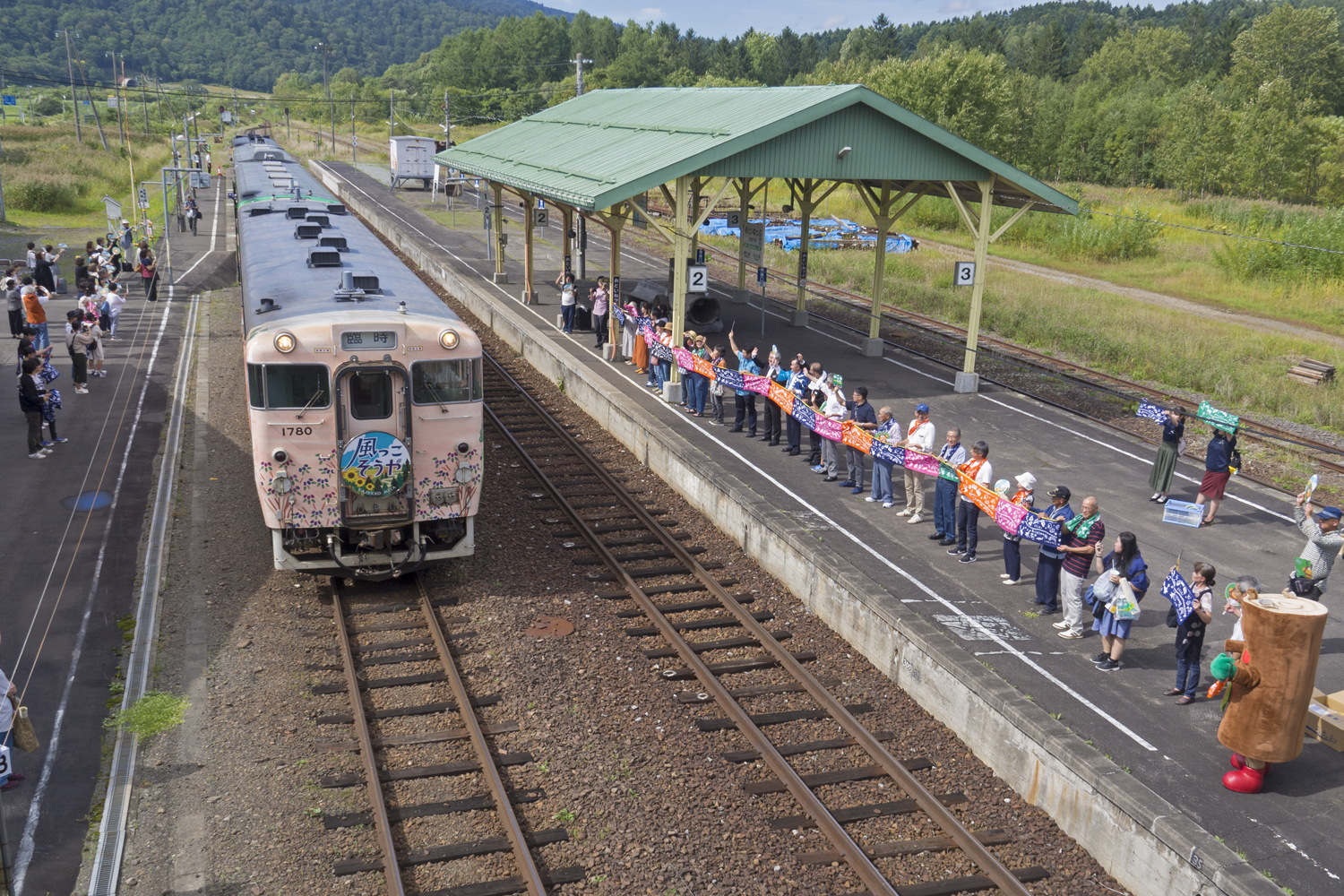 Even with the COVID-19 pandemic restricting their activities, they didn't just sit back idly. They decided to do what they could now, and started selling canned railroad track stones.
"We can't just pick up stones from the JR line without permission, so we use stones from the old Tempoku line, which is owned by the village," said Yokoyama. 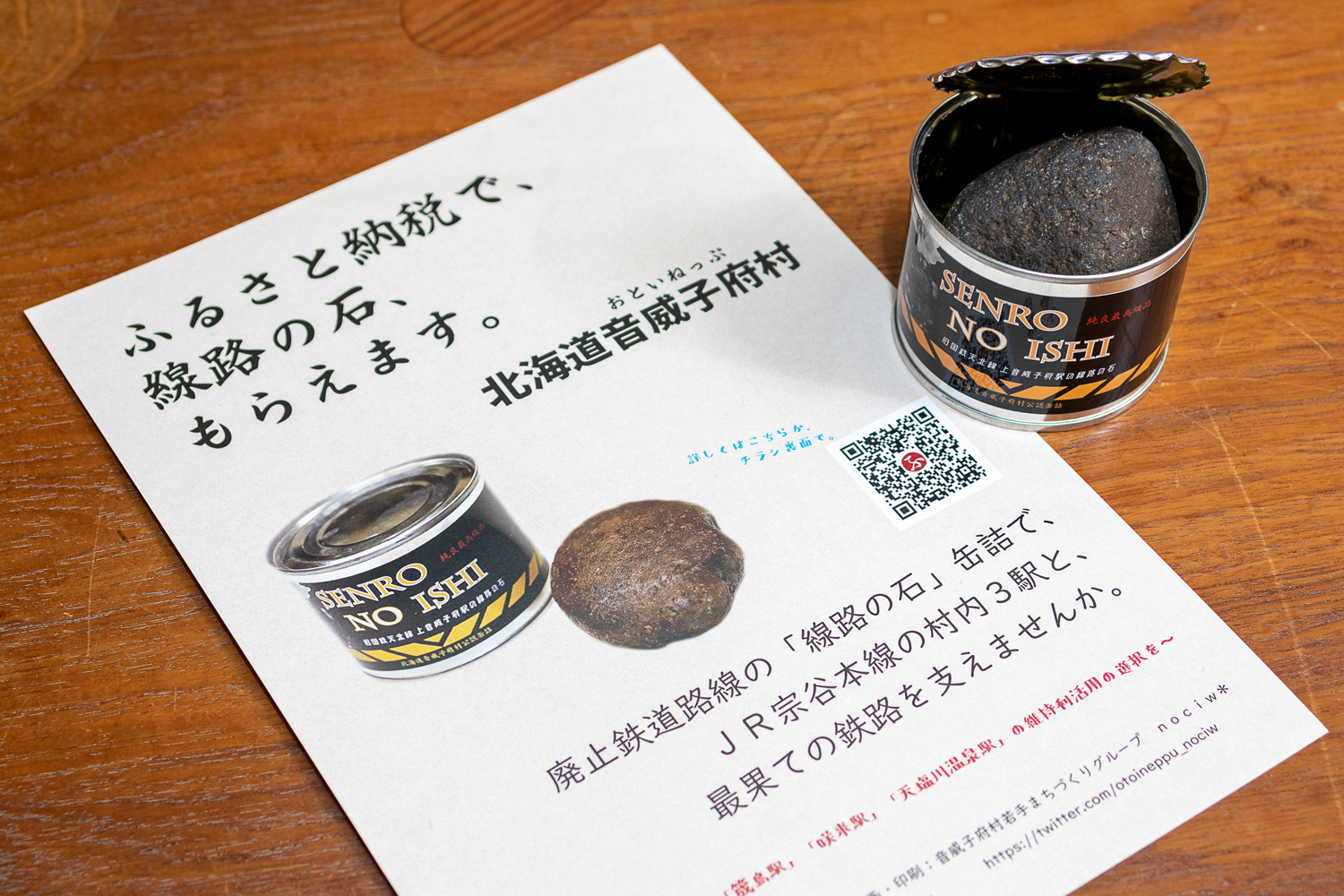 Finally, we asked them about their aspirations for the future of nociw*.
"I want to enliven the Soya Line while making the most of our history as a railroad town. I believe that if we continue to do something interesting, the future of the railroad as well as the lives of the communities along the line will become more enjoyable," said Yokoyama.
"We enjoy working on what we are interested in, and it has been beneficial to the community. I want to keep this approach going," said Sato.

There seems to be no end to the things they want to do. 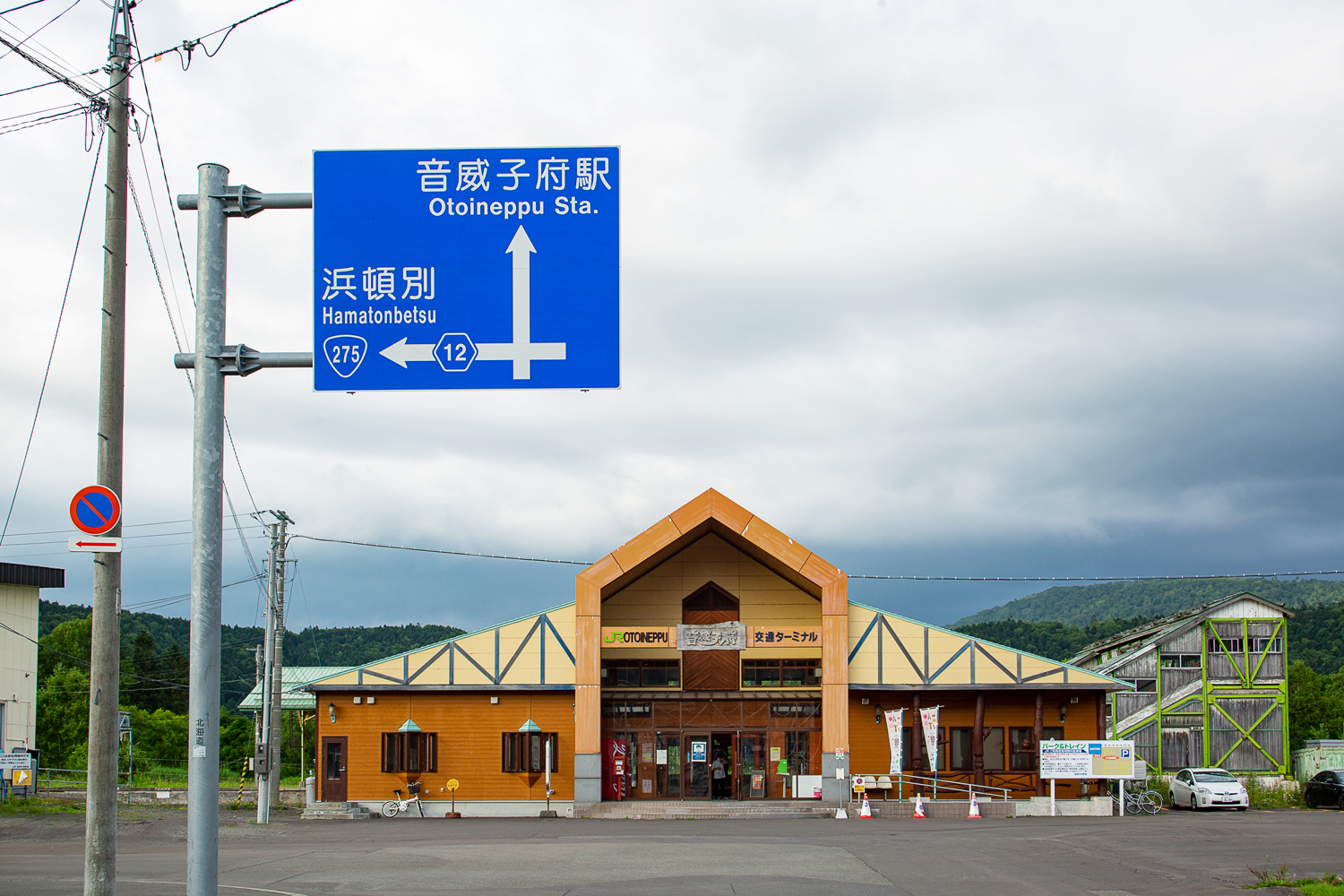