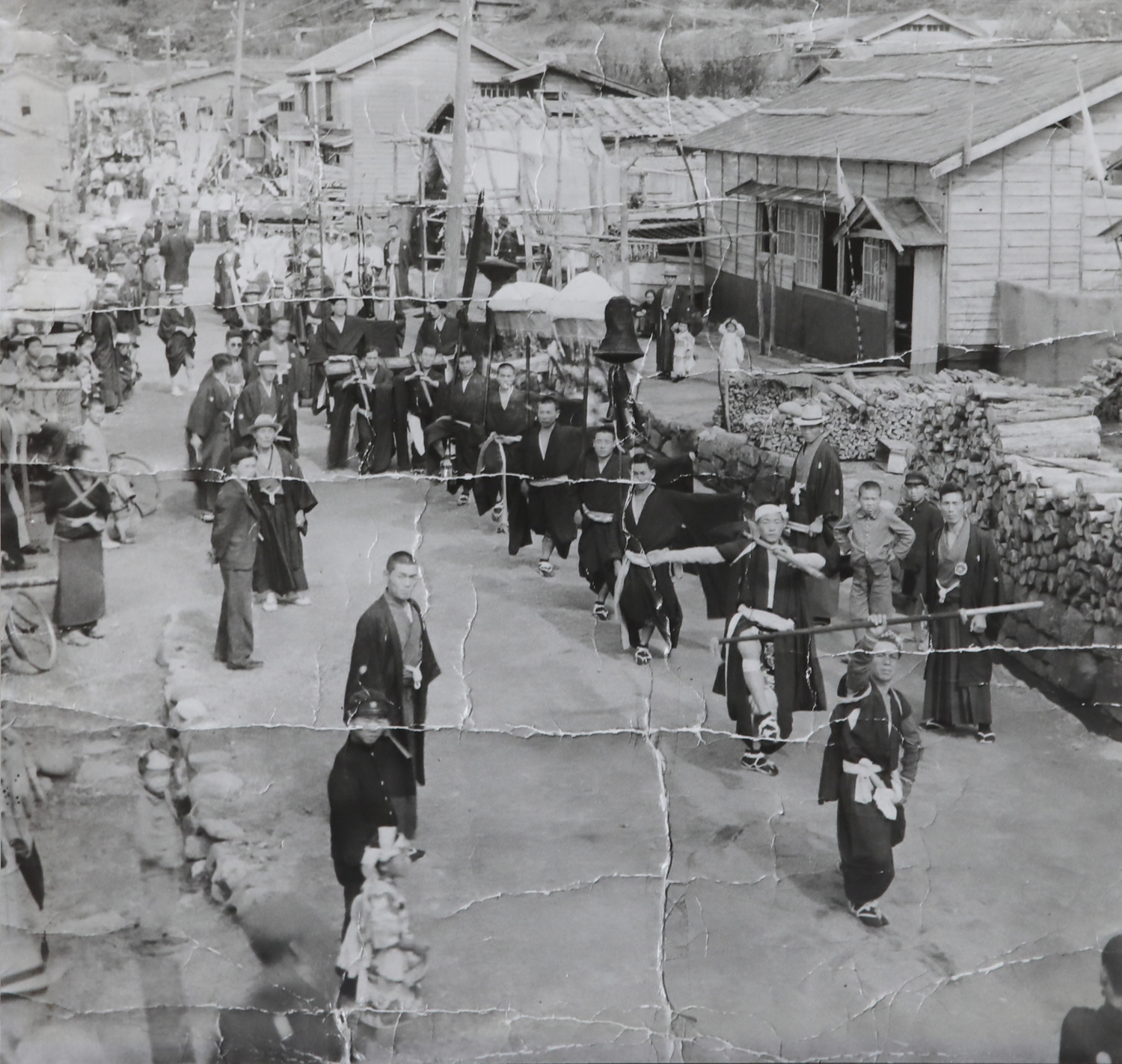 Ainuma yakko leading the procession of mikoshi portable shrine and floats at the festival of Ainuma Hachiman Shrine in Kumaishi, Yakumo (collection of Kumaishi History Museum)

There are many traditional performing arts called yakko in southern Hokkaido. Yakumo's Kumaishi facing the Sea of Japan is home to Ainuma yakko, a performing art that has continued for more than 160 years, connecting the people of this region over time.
Words by Ishida Mie
Photographs by Ito Rumiko
Translation by Xene Inc.

Ainuma yakko, designated as an intangible folk cultural asset in Kumaishi, where fishing has flourished since ancient times, was first performed around 1859, when the Hiyama coast was booming with herring fishing, at a ceremony to celebrate the rebuilding of the main hall of Ainuma Hachiman Shrine. It is said to have been performed by herring fishermen who came from the Hokuriku area at that time.

Ainuma yakko is held every three to five years at Ainuma Hachiman Shrine Grand Festival, and is performed as an accompaniment to the mikoshi portable shrine procession, which takes two full days to parade through the community. The full-scale procession is made up of more than 40 people and consists of several parts, including the kasatori leader, nagae long handle, nanatsu dogu seven tools, and naginata long sword. The dancers perform graceful, perfectly coordinated movements while shouting out chants.

Katsuragawa Yuki of the preservation society says, "When the procession is assembled, it is about 300 meters long and is a spectacular sight." 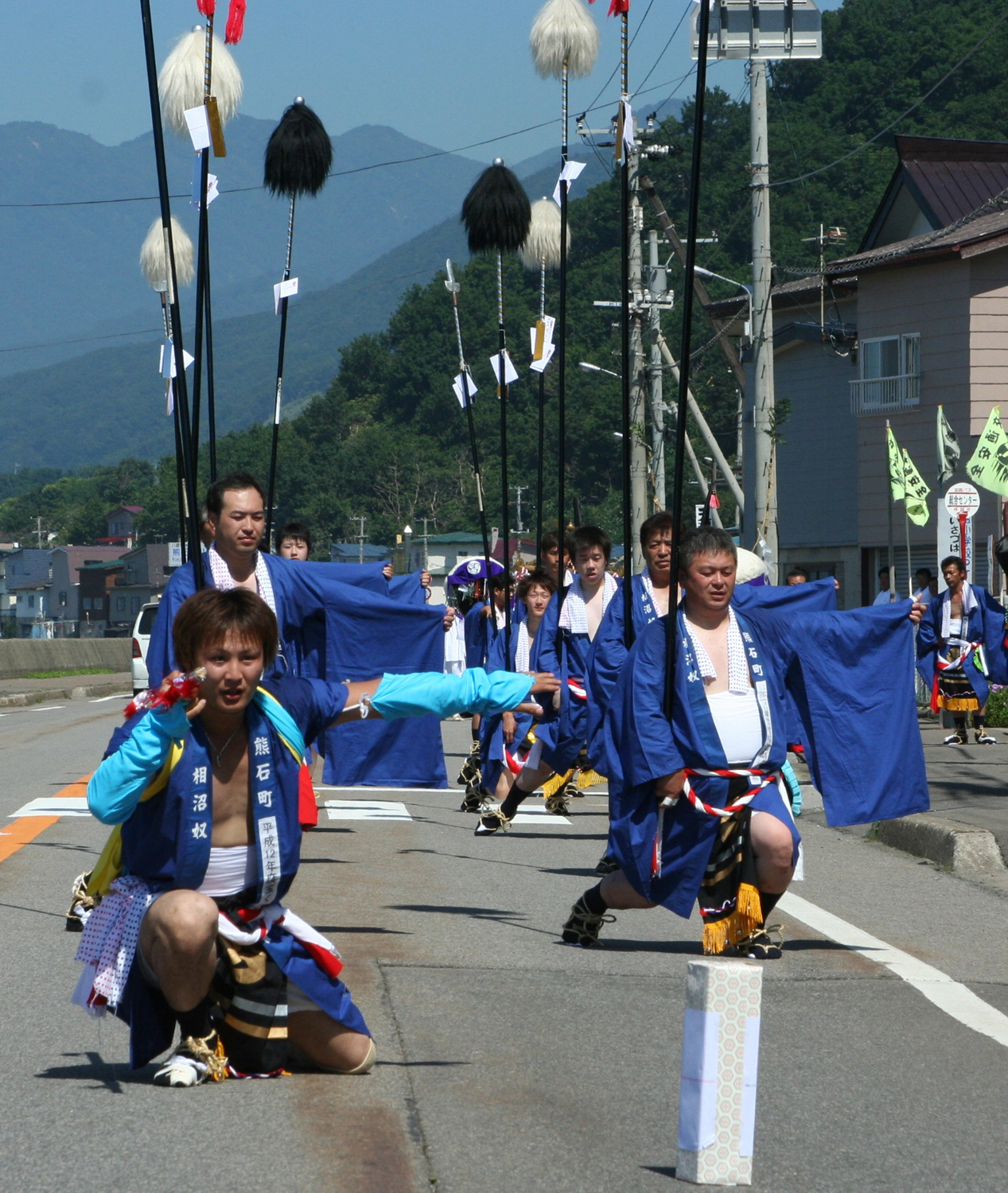 The highlight of the event is the breathtakingly coordinated work of everyone
(photo by the Yakumo Town Kumaishi Branch Office). 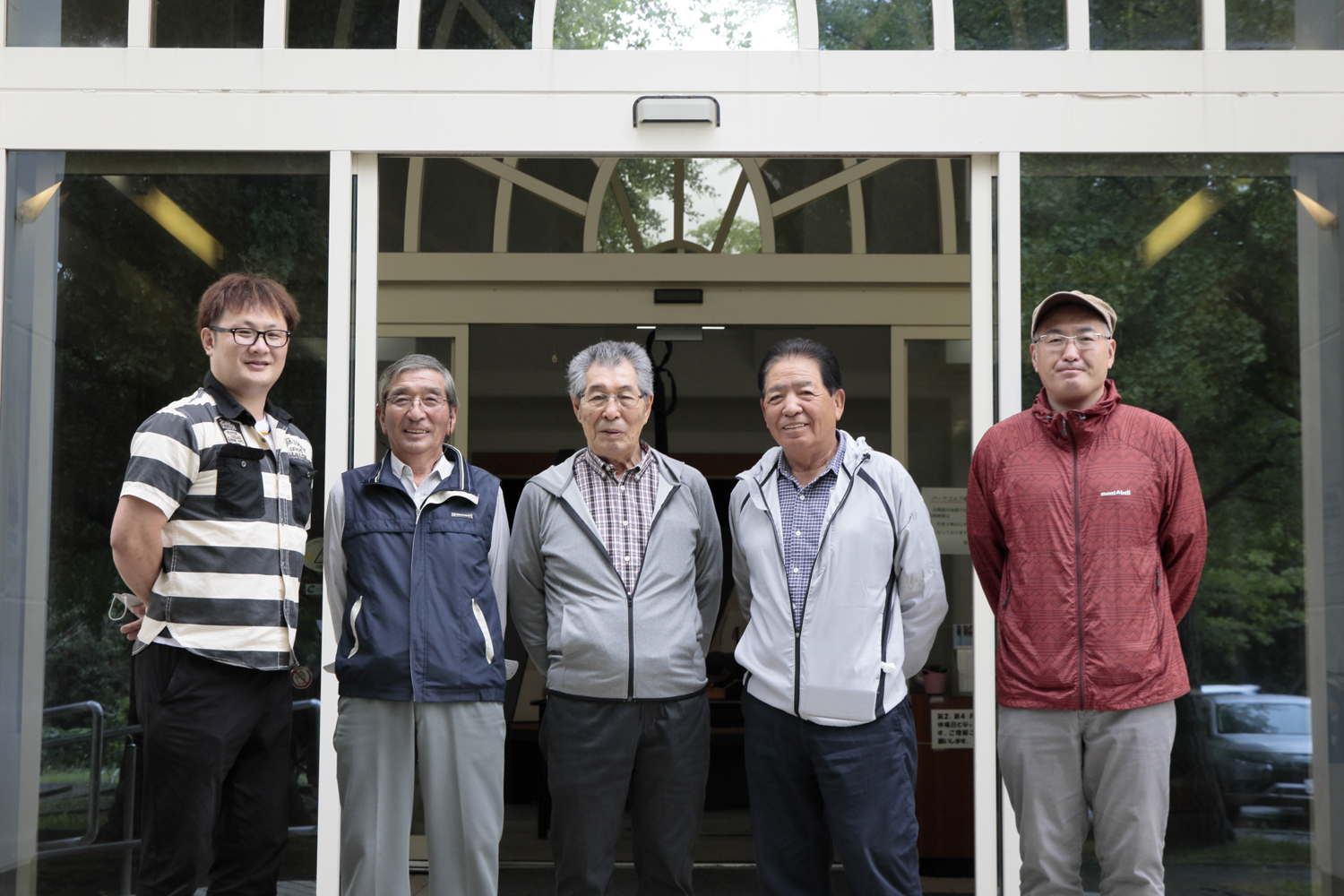 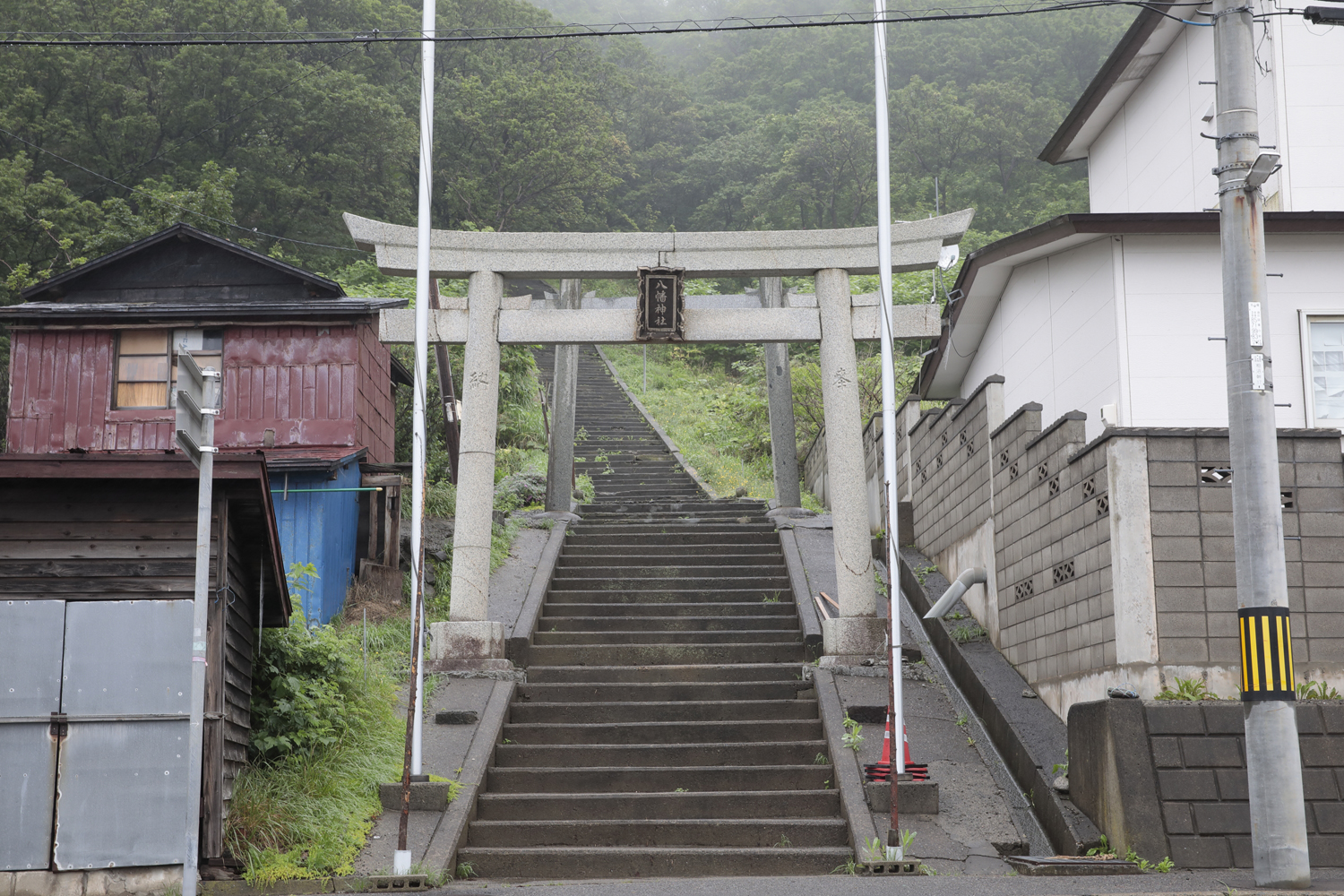 The dreams of the youth

The Ainuma Yakko Preservation Society was formed in 1968 by volunteers from the town to carry on the tradition of Ainuma yakko. The current president, Aburaya Kuniaki, has been in charge of the nagae long handle role since he was 17 years old, and currently serves as the organizer of the association. In recent years, the preservation society has been suffering from a lack of participants, but there was once a time when young people wanted to join, but couldn't due to lack of room. Aburaya remembers those days well.
“It is a very special honor to be able to participate in the yakko procession. Not everyone can participate. About a month before the festival, newcomers gather after finishing their work and receive instruction from yakko masters on how to perform.”

Aburaya told us about the interesting traditions.
If they make a mistake during the performance, if they are out of step with the people in front or behind them, or if something goes wrong, they stop the performance and sit down right there. Then, a person from a nearby house immediately offers them some alcohol, which they drink putting them back on track and they start over.
“No matter how drunk you get, they always end on a high note.” 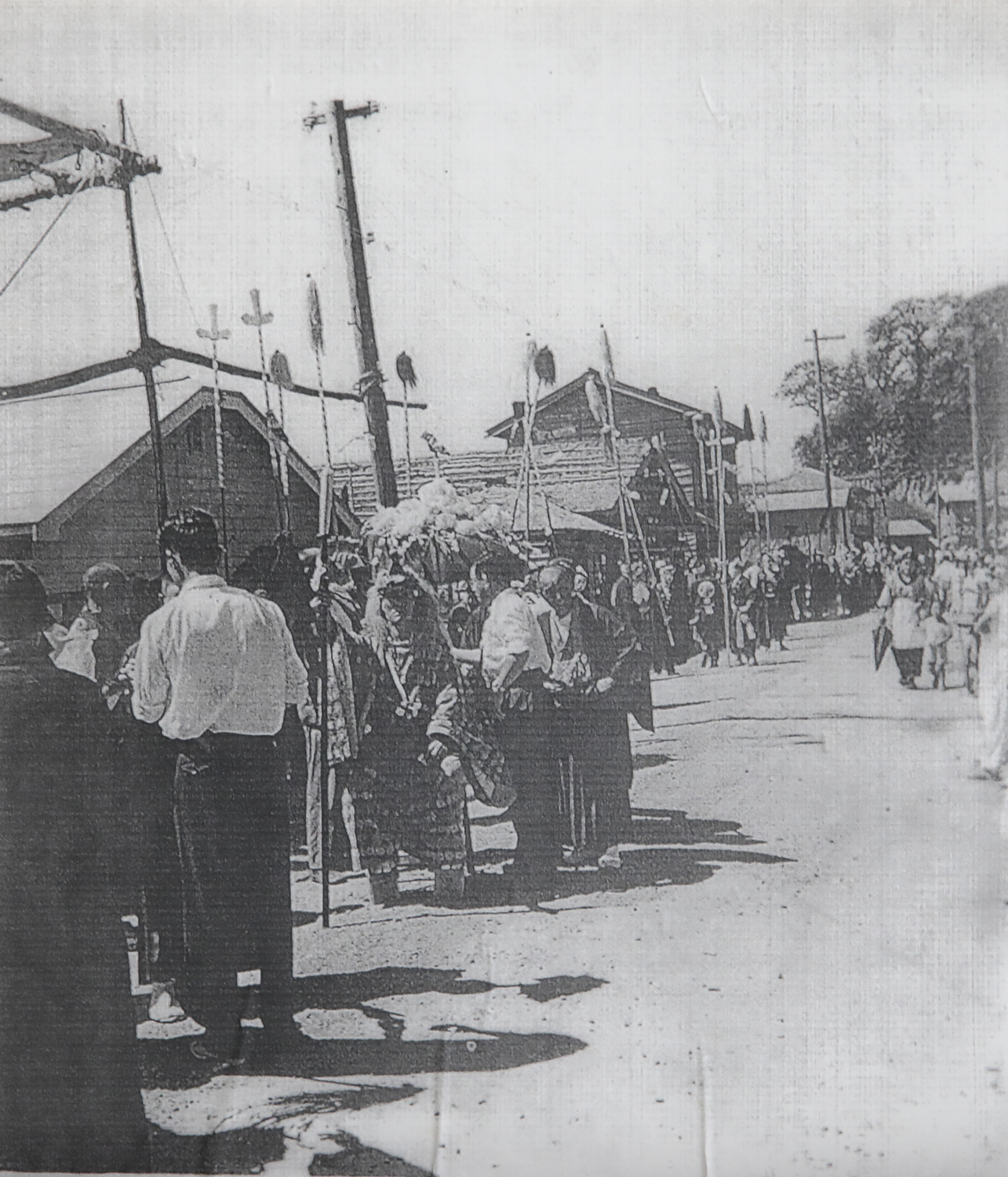 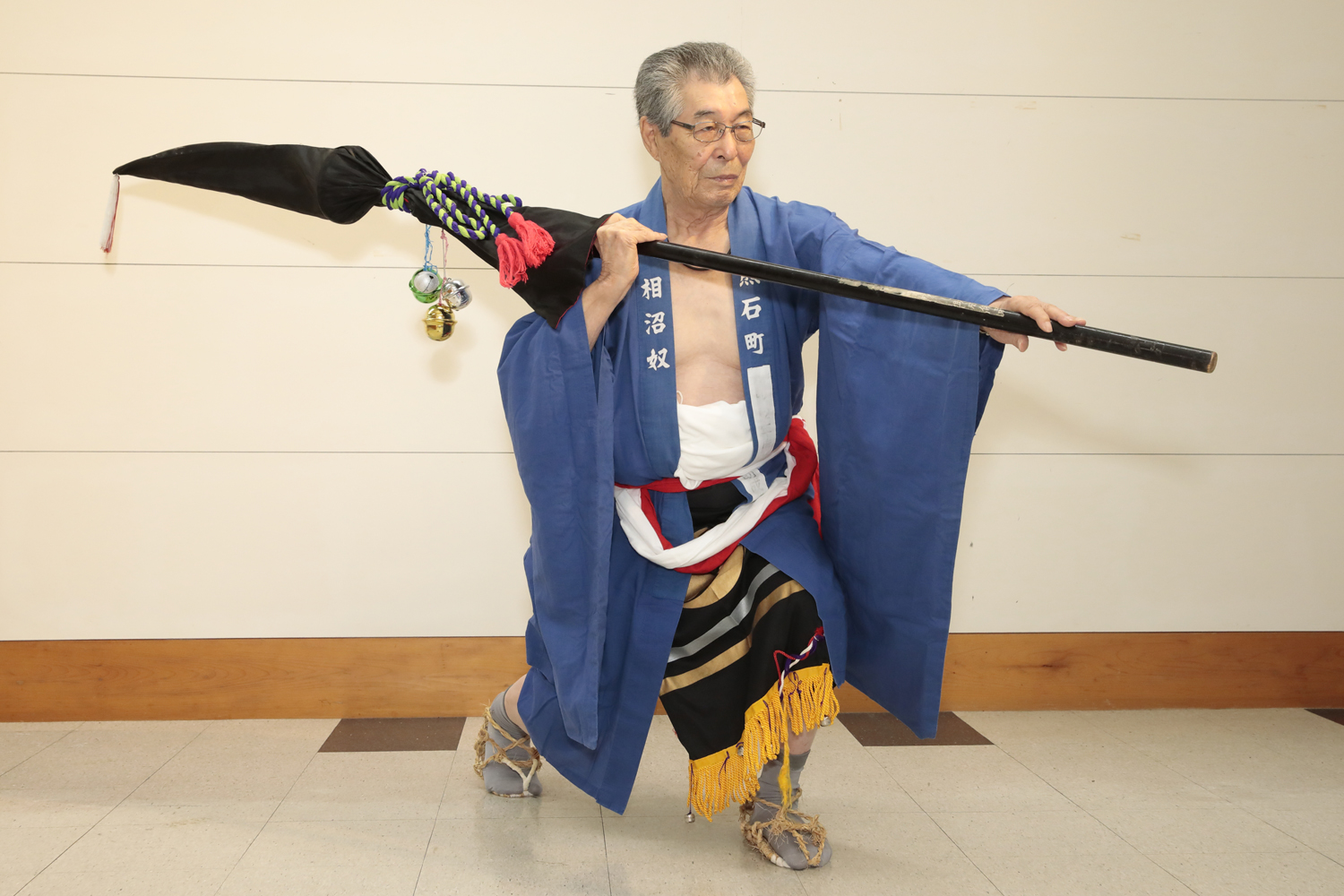 President Aburaya put on the actual clothing for the performance

Ainuma Elementary School and Kumaishi Daini Junior High School, both of which were located in this area, had long studied the Ainuma yakko in order to learn about local traditional culture. The yakko masters were able to teach the children how to conduct the performance and at the same time have a place to share their passion for the yakko.
Performances were held twice a year. Immediately before the performances, the preservation society members would visit the schools every day and on the day of the performance, watch over the children's every move. A system was established for the children to pass on the performance of their parts to the younger students.

However, the last time a yakko procession was performed at the Ainuma Hachiman Shrine's Grand Festival was in 2016. The following year, the four elementary schools and two junior high schools in Kumaishi were each consolidated into one school. Since the new school is attended by children from outside the Ainuma area, it is no longer possible to include Ainuma yakko in the integrated learning program. The Ainuma yakko tradition, a system in which the school and community worked closely together, is unfortunately currently on hiatus. Due to the COVID-19 pandemic and other factors, it is not clear when the next yakko procession will be held at the festival. 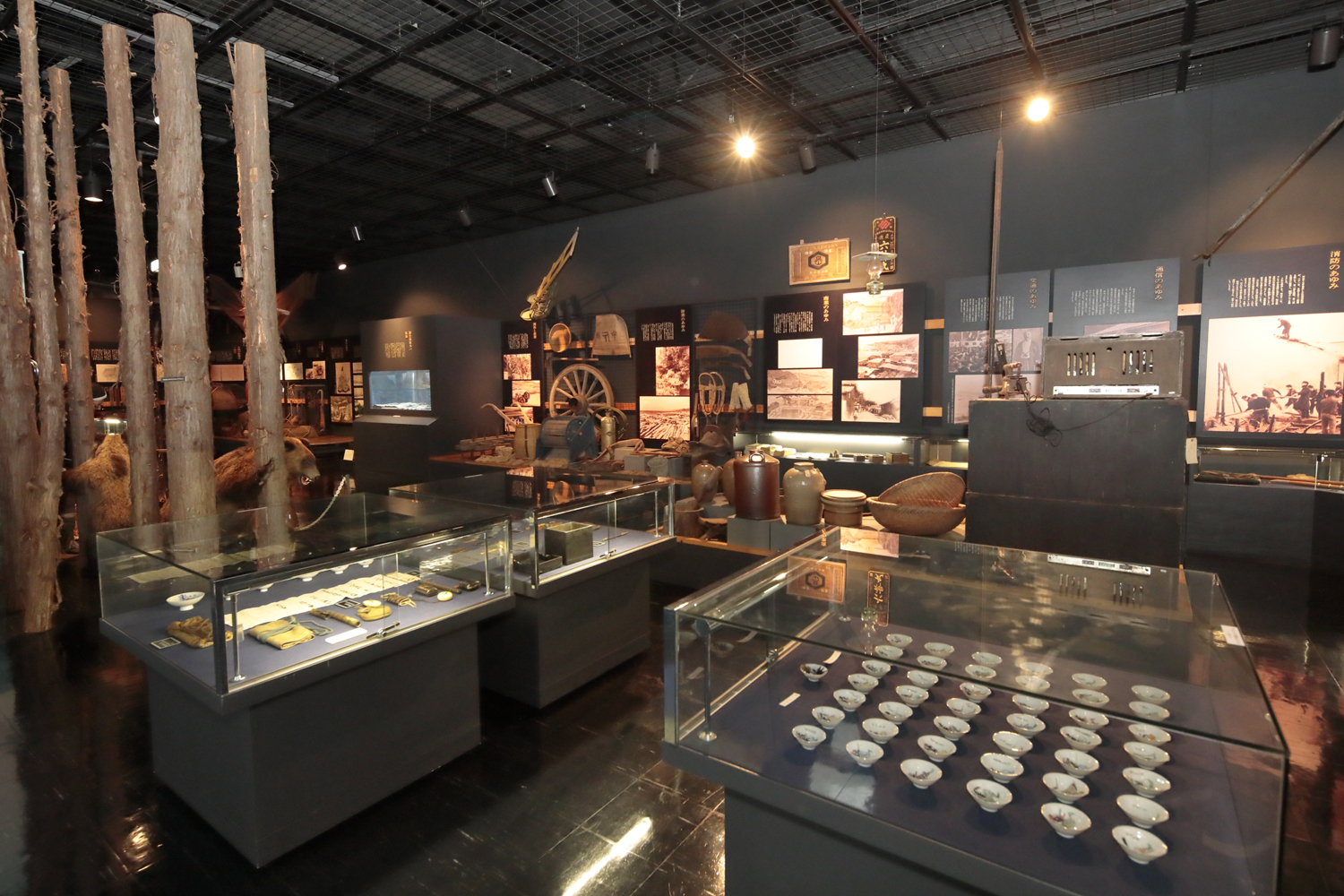 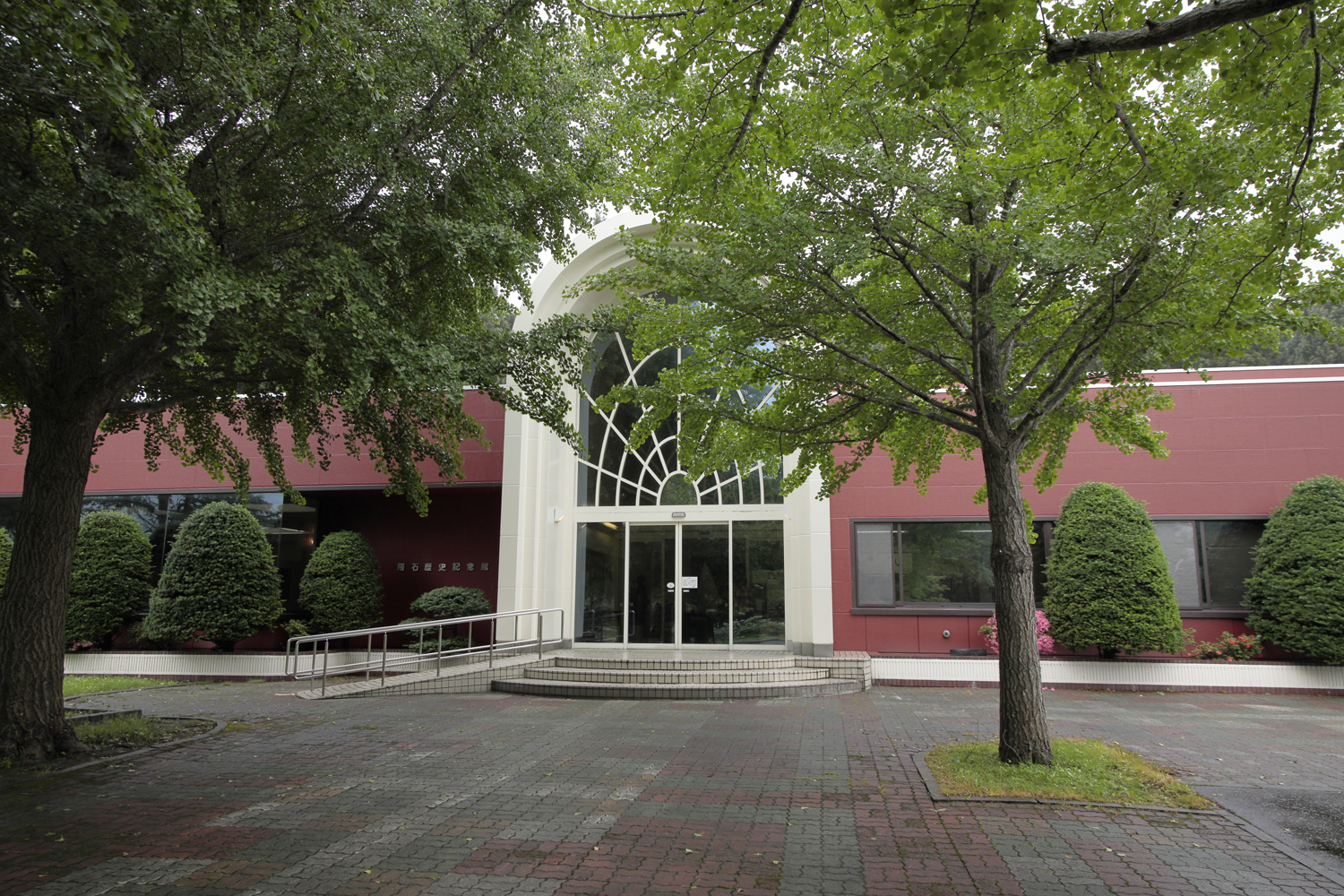