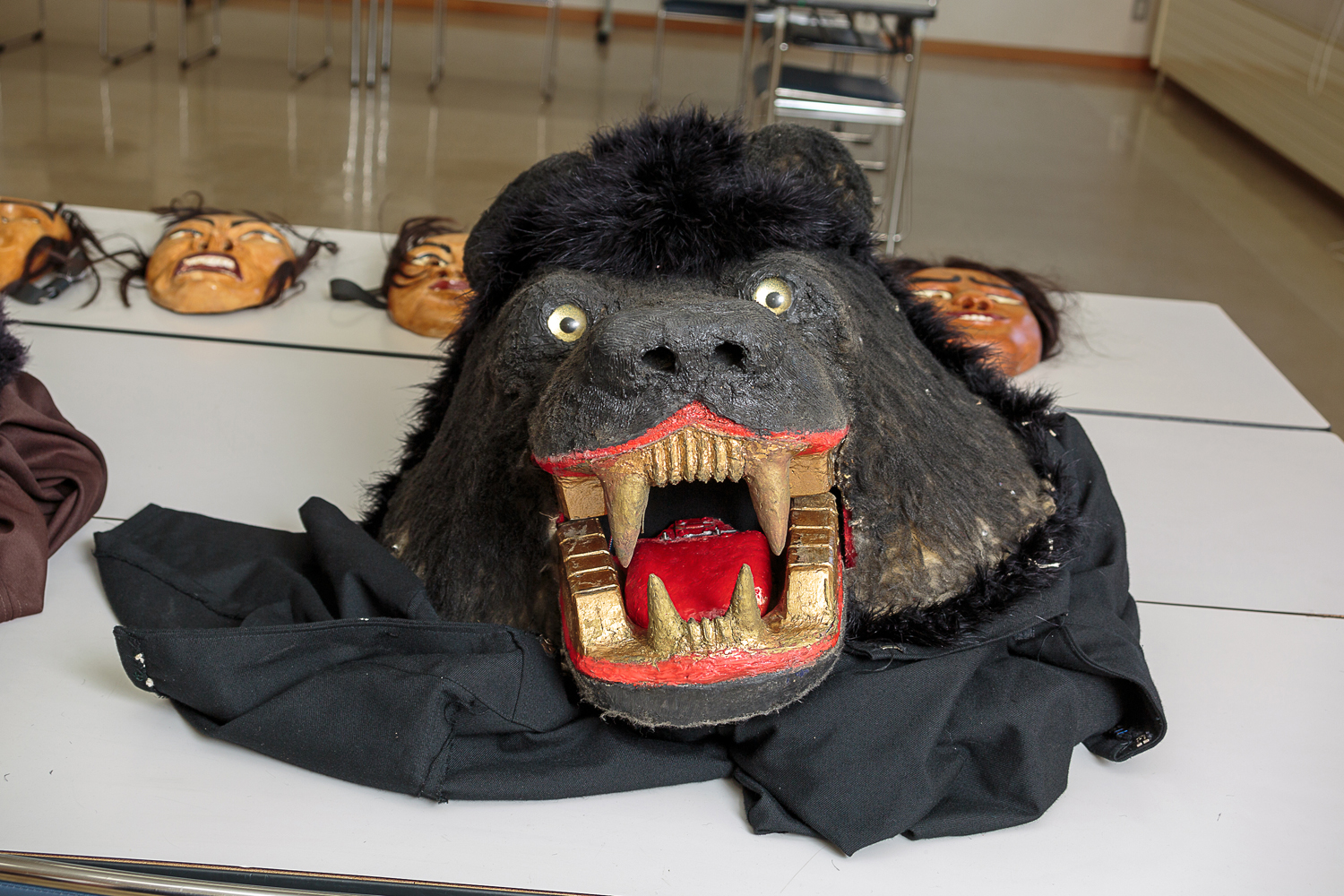 The brown bear head, not the shishi lion's head, of the Tomamae kuma shishimai bear dance.

The Tomamae kuma shishimai bear dance was created by present-day local people based on a real brown bear.
Words by Shibata Miyuki
Photographs by Kurose Michio
Translation by Xene Inc.

Tomamae, a town on the Sea of Japan in northern Hokkaido, was the scene of the Sankebetsu bear incident in the early Taisho Period (1912-1926), when settlers were actively pioneering the area. The incident has been captured in the form of a local performing art called shishimai. 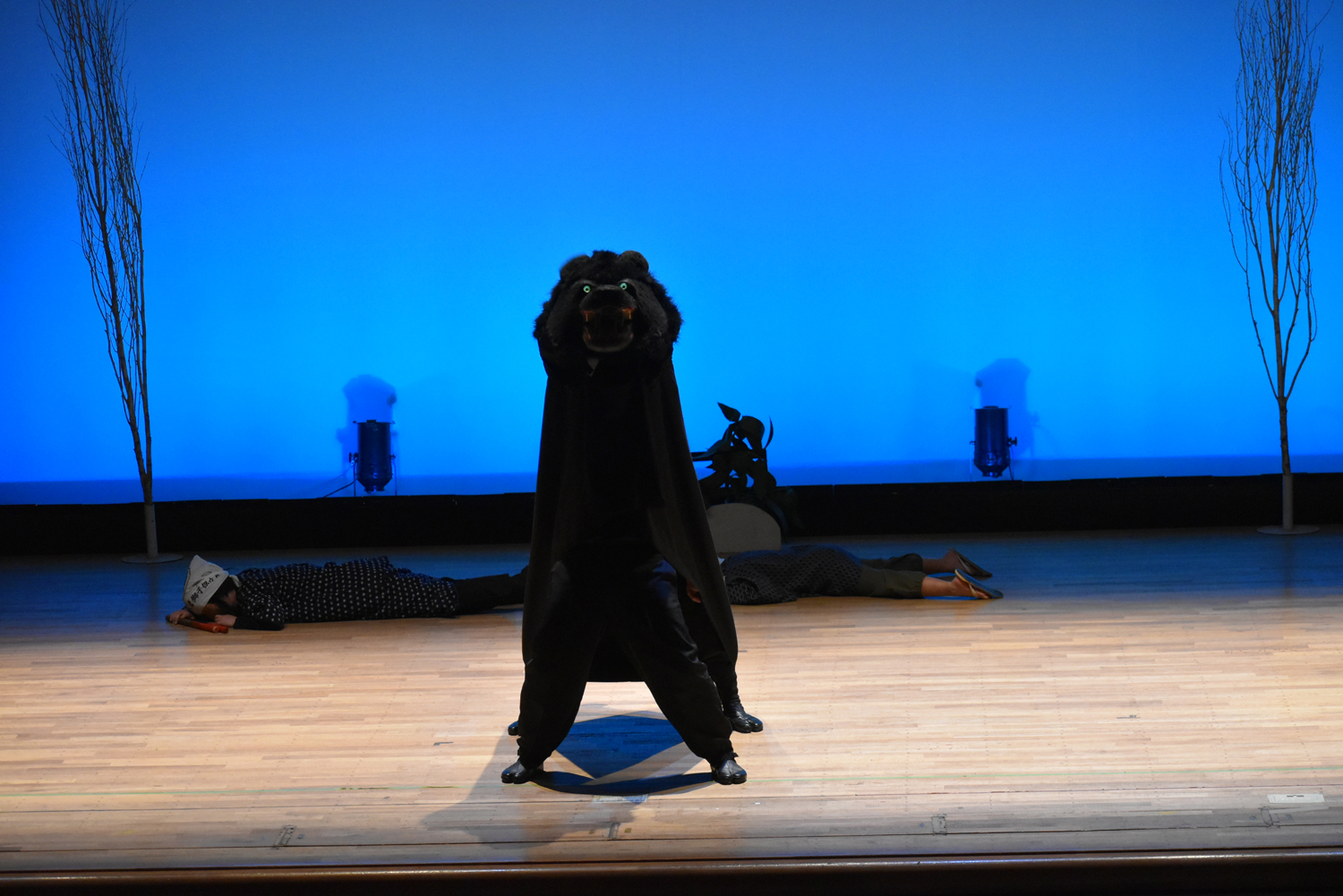 Tomamae Town has long flourished as a bountiful fishing ground. In addition, farming began full-scale in the inland area by people who settled there for pioneering purposes, and by 1897 there were more than 200 farming households in the area. The number of settlers continued to increase, and settlement spread to Sankebetsu, now known as Sankei, where the historical tragedy took place.

After hearing that the atmosphere of the incident had been restored at the site where the settlement once stood, we visited the site under the guidance of Ito Michiyasu, who is an expert on the history of the town. After walking along a dense forest path, we came upon an open space. A giant brown bear looks like it is about to attack a grass pioneer hut. Of course, the bear is not real, but according to records, it was 2.7 meters tall and weighed about 340 kilograms. 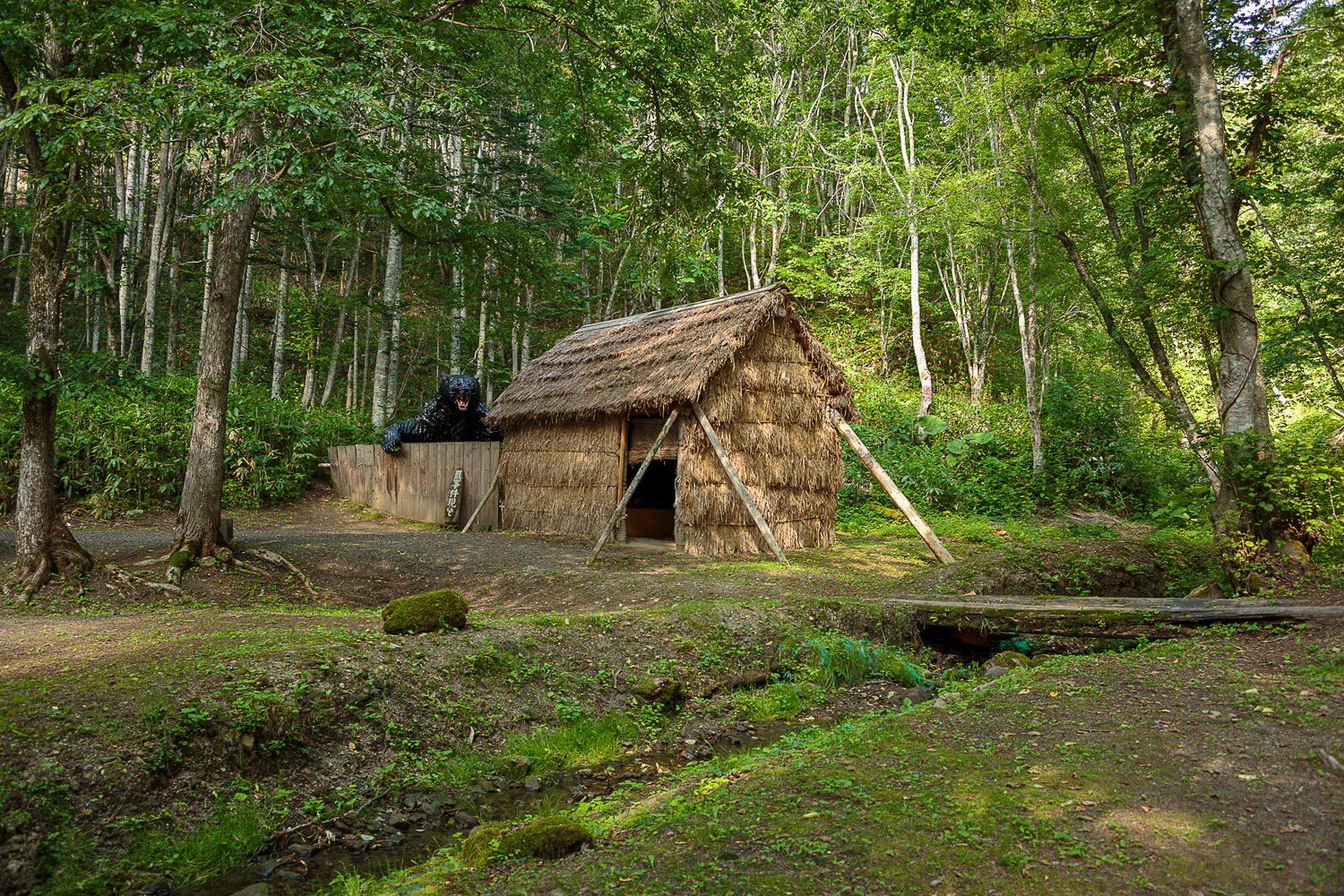 Restored pioneer hut in the forest

Fifteen households had settled here, having moved there from neighboring pioneer villages. The incident occurred on December 9 and 10, 1915. A massive male bear attacked the houses one after another, devouring and killing a woman and seven children. The first house that was attacked was made of wood, not the typical grass, and although it was a sturdy pioneer hut, it did not pose as an obstacle to the brown bear. Afterwards, the tragedy repeated itself, including an attack on a pregnant woman in a house where women and children had taken refuge, until finally, on December 14, the bear was shot by a single hunter. 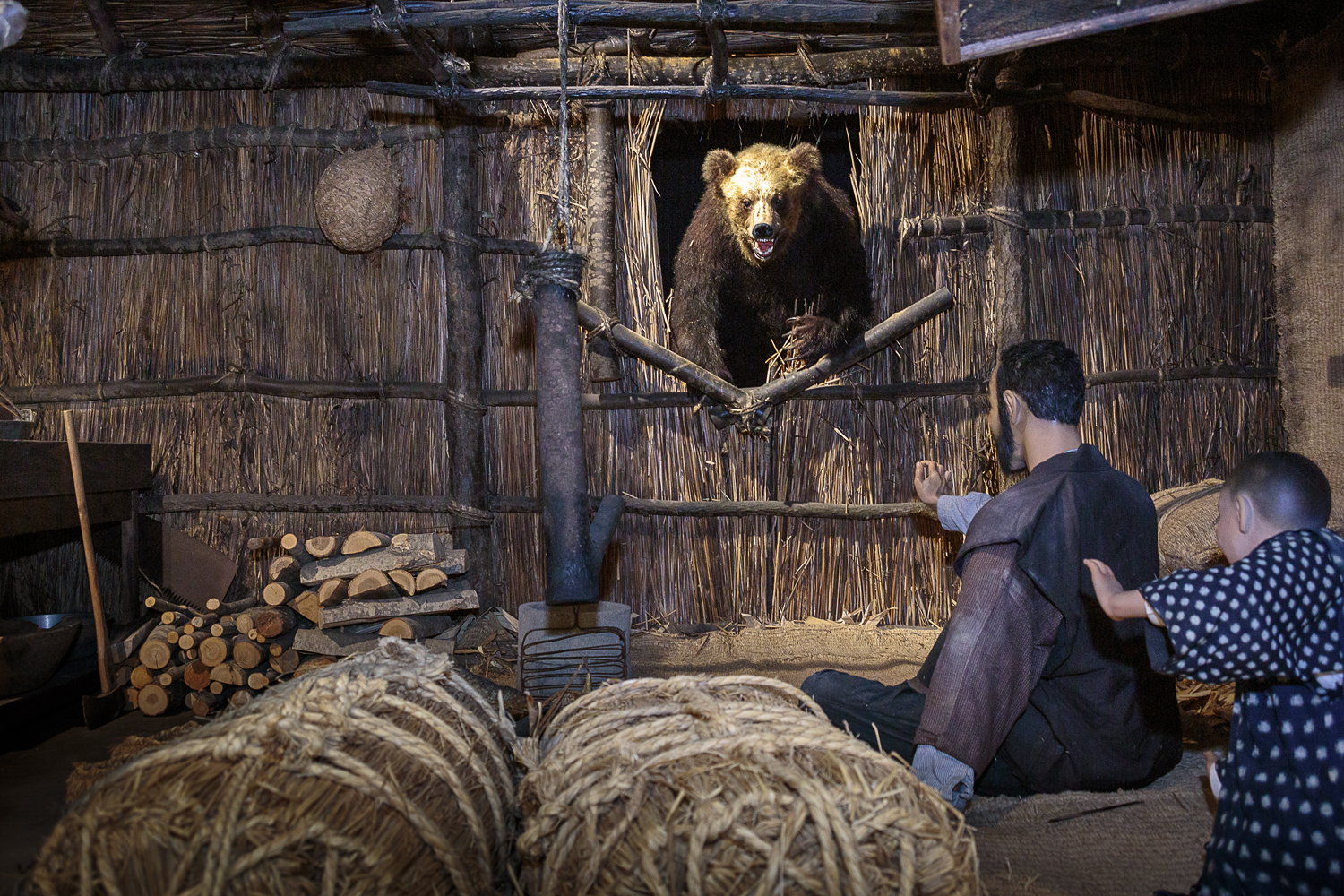 Tomamae Town Museum, located in the city center, has exhibits focusing on the brown bear incident. 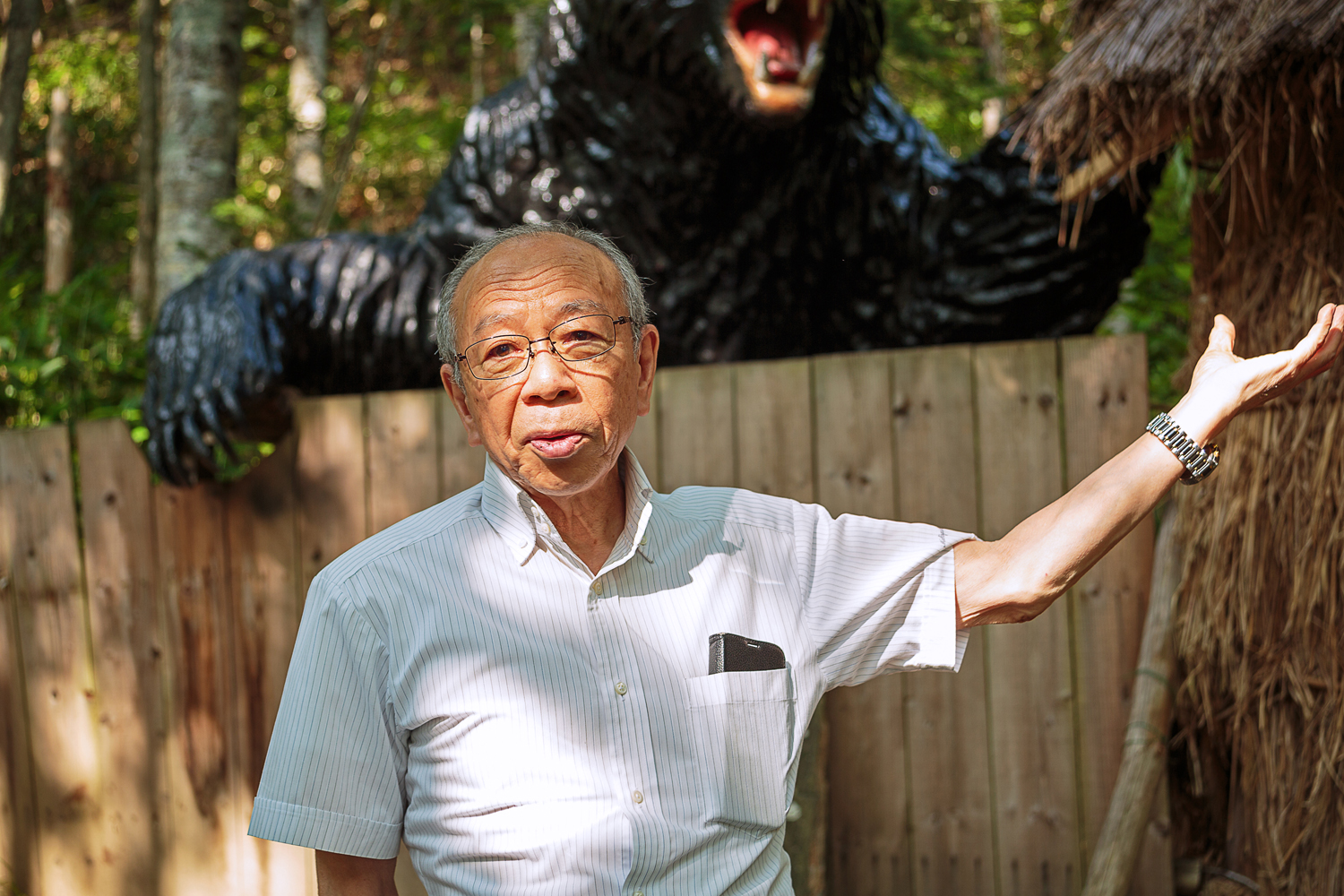 Birth of the kuma shishimai bear dance, unique to the region

How did this event turn into a shishimai dance?
Its origin can be traced back to the 1970 closure of the Haboro Coal Mine in Haboro, a town adjacent to Tomamae Town. At that time, the Kotanbetsu Shrine in Tomamae received two shishi lion heads from the Oyamazumi Shrine, which was located at the coal mine, and was taught how to perform the shishimai lion dance.
At first, it was a traditional shishimai lion dance, but as Hanai Hideaki, chairman of the Tomamae Town Kuma Shishimai Bear Dance Preservation Society describes, it was changed to a more creative kuma shishimai bear dance, "because we wanted to create a special local shishimai dance." Talk of the Sankebetsu bear incident had long been avoided publicly due to its unparalleled tragedy and concern for the bereaved families. However, the local people have chosen to preserve the incident for future generations by expressing it through a shishimai dance. In 1973, the Tomamae Kuma Shishimai Bear Dance Preservation Society was established by volunteers, directors of Kotanbetsu Shrine, and others resulting in the first performance of the Tomamae kuma shishimai bear dance. Rather than following traditional dancing and musical accompaniment, the Tomamae kuma shishimai bear dance was created from scratch with a storyline, and the shishi lion's head was changed from a lion to a brown bear.
The early brown bear heads were elaborately carved out of wood and are amazing works of art. According to Hanai, "I forgot his name, but I heard that they were made by an Ainu wood carver in Kamikawa. Even though he refused to make it at first, supposedly he finally made them after being asked again and again." The masks of 12 villagers, each with a different expression, were also created by this wood carver. The current brown bear head is the fourth generation, and was handmade by a member of the society. The wooden bear masks were so heavy that the dancers had to alternate during the performance, and plastic masks were used to reduce the weight. 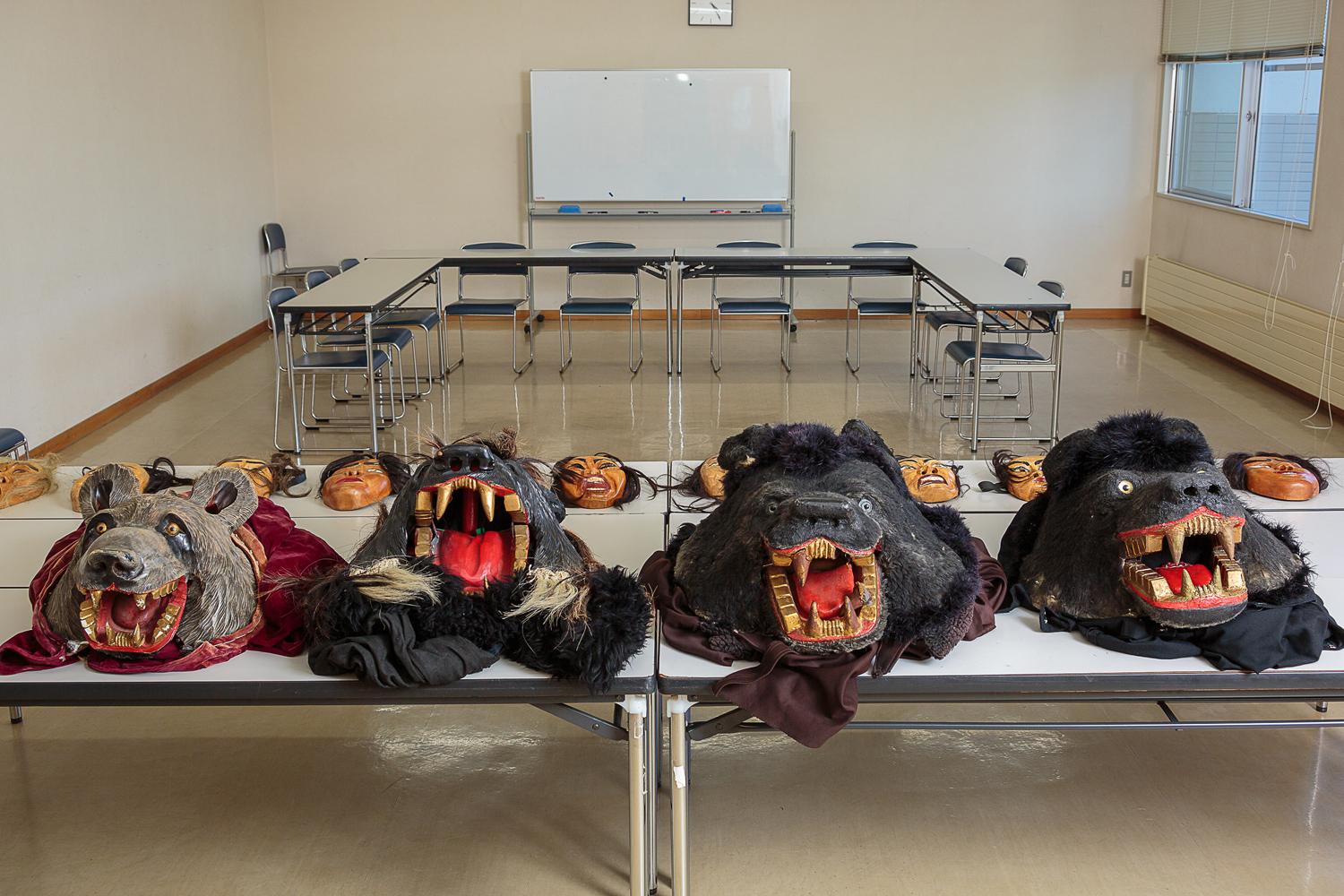 Brown bear head masks throughout the years. The two on the left (first and second generation) were made by a wood carver in Kamikawa. The two on the right were made with fiberglass reinforced plastic to reduce weight. 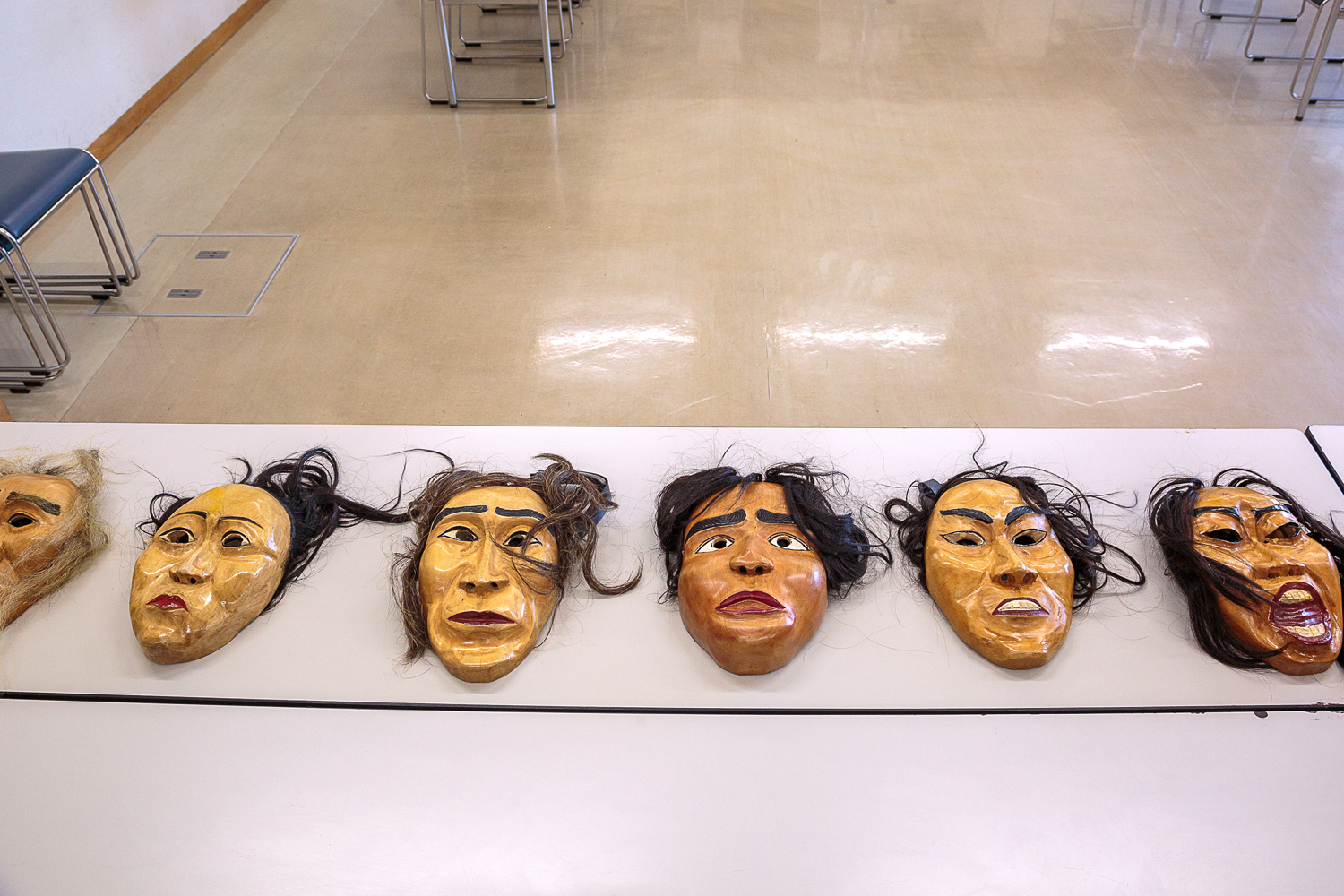 The masks of the villagers still in use today were made by the same Kamikawa wood carver as the one who made brown bear heads.

However, due to the declining birthrate, the youth group was disbanded after about 10 years. The performance was also temporarily suspended due to a lack of people to carry out the kuma shishimai bear dance. It was Hanai, the new chairman, who revived it. Hanai changed the format to one that does not separate adults and children, but rather allows various generations to participate together. Currently there are about 20 members. They perform at the annual community center festival held in late October. 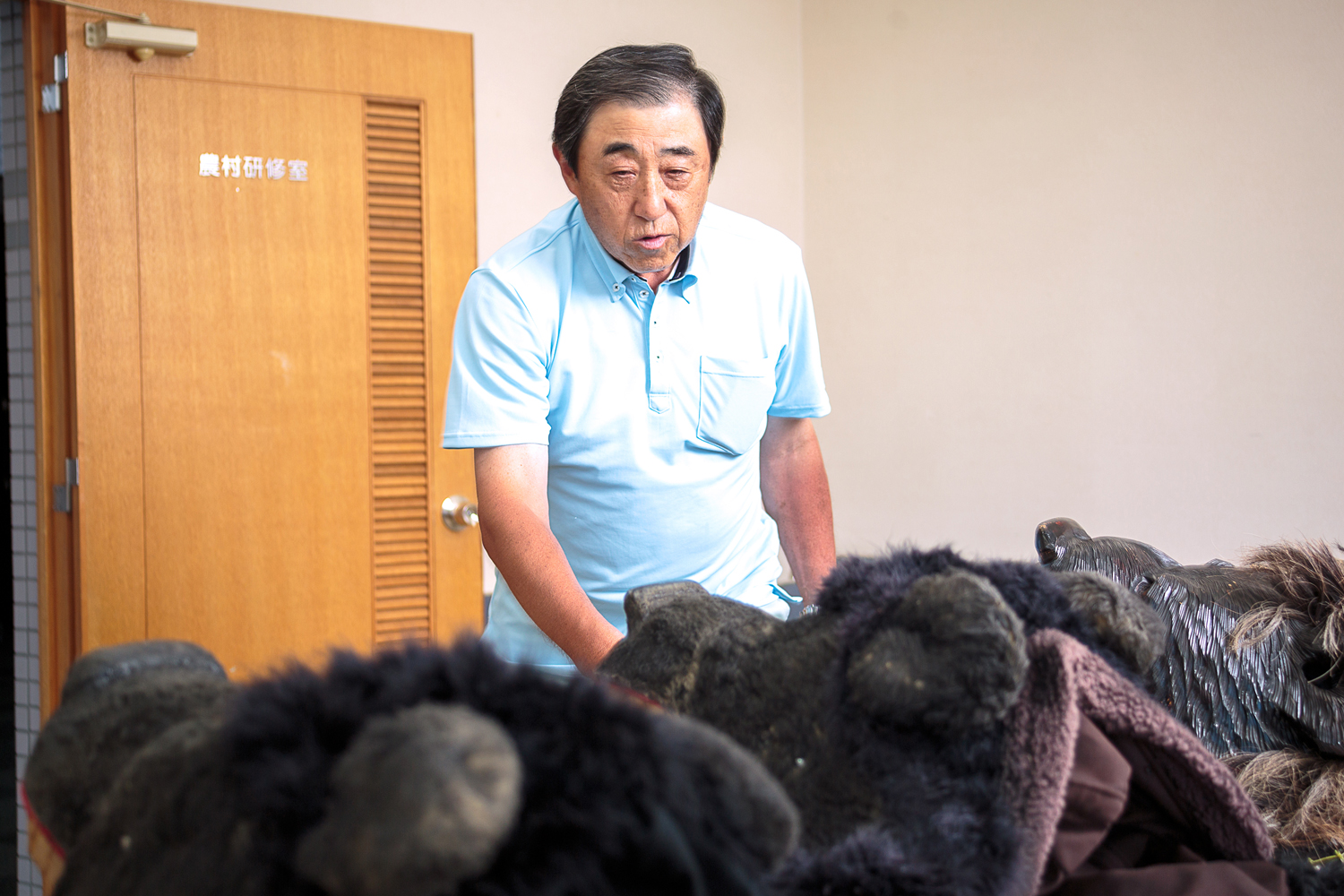 Hanai Hideaki. His mother's relative was present at the scene of the brown bear incident and he was told stories about the incident by his mother.

Hanai expresses his passion saying, "Many people left the Tomamae pioneer area because of the bear incident. However, Tomamae exists today because of the people who stayed and worked hard here. It is necessary to preserve the kuma shishimai bear dance for them." 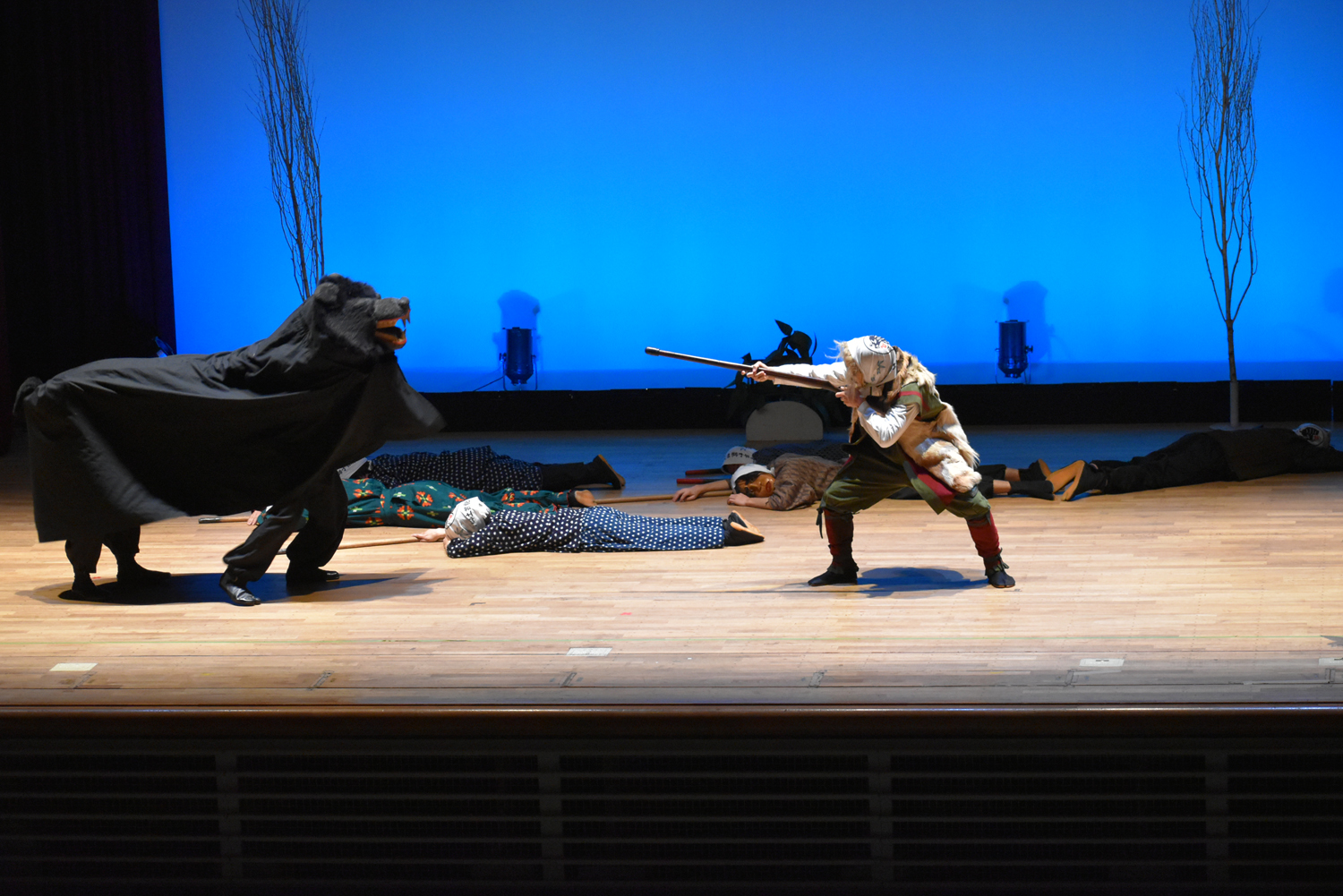 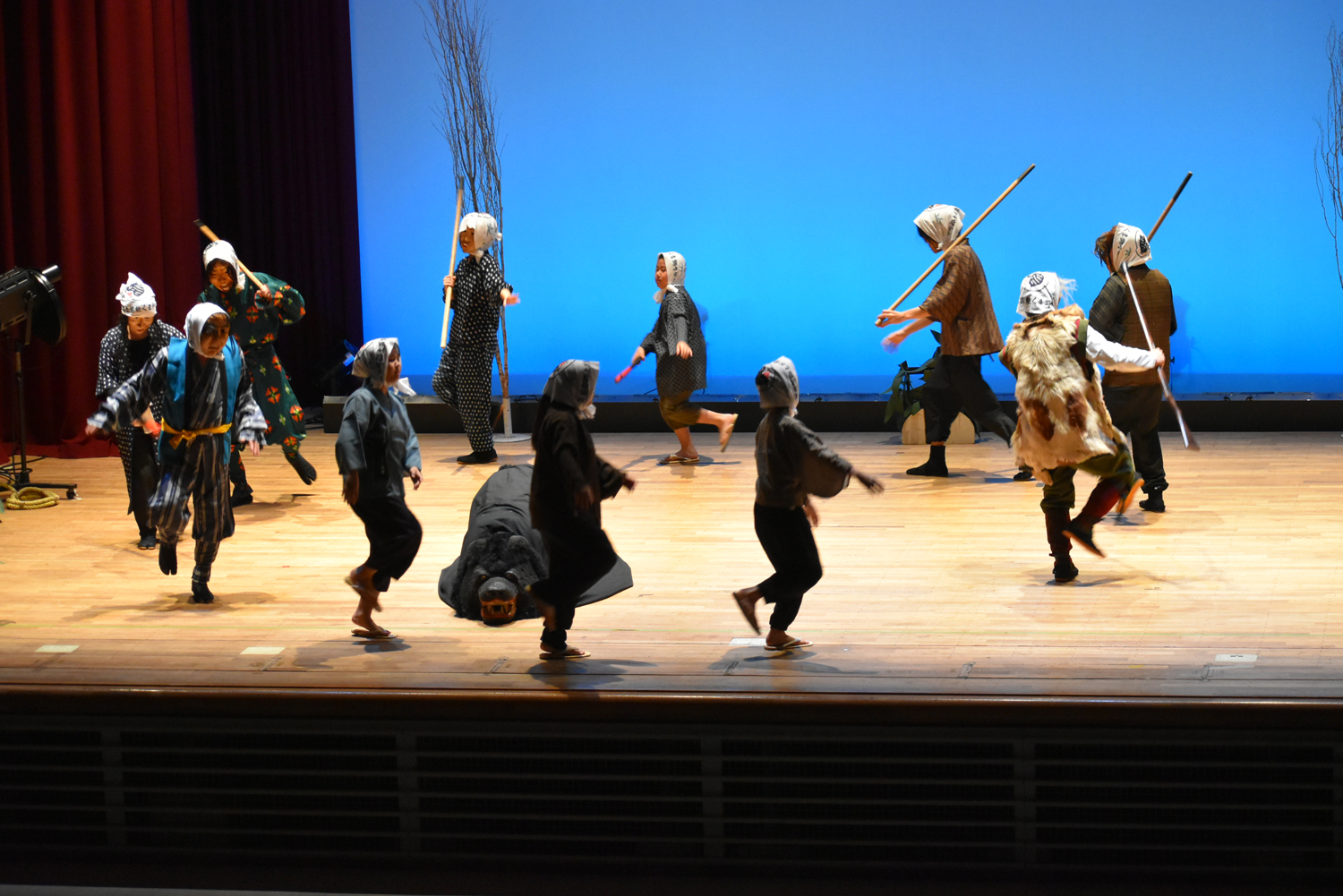 The kuma shishimai bear dance consists of three acts (photo courtesy of the Tomamae Town Board of Education).