A sense of crisis and excitement

The Mori to Ie Project that began in Shimokawa originated from a sense of crisis on the part of local construction companies. They feared that if things kept going the way they were the local economy would dwindle. But the construction companies' craftsmanship and hopes for new encounters also helped the project.
Words by Ishida Mie
Photographs by Tsuyuguchi Keiji
Translation by Xene Inc. 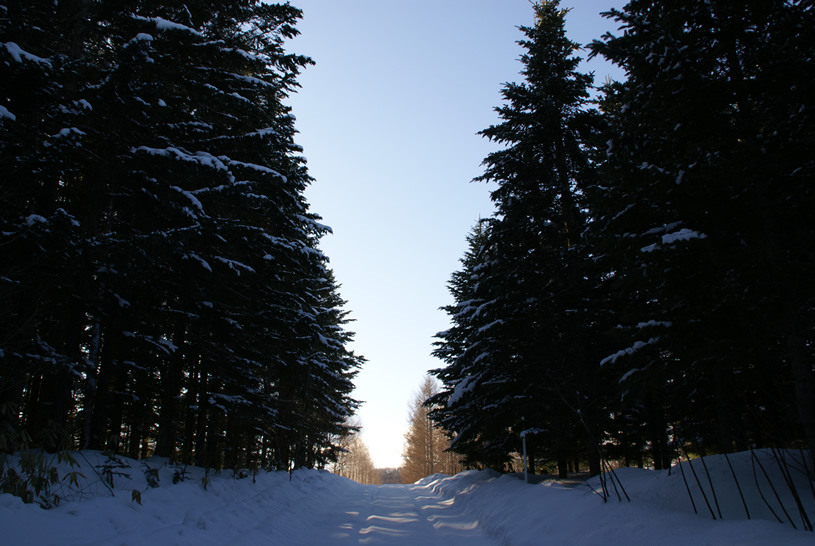 A grove of Abies sachalinensis in Shimokawa. A wide work road running between the trees is essential to efficient forest maintenance. (Photo courtesy of the town of Shimokawa.)

They found something new while looking for what they lacked

Shimokawa-born Moriyuki Yamagata is the CEO of a construction company participating in the Mori to Ie Project, which was introduced in a past article. We asked him about the beginnings of the project.

"The town's population was shrinking and graying, and the number of people who built new houses in town each year finally had dwindled to the single digits. On top of that, large home building companies came in from Sapporo and Asahikawa. The project started when local construction companies met to think up a secret plan to get out of the critical situation facing them: If things kept going the way they were, the local economy would not be able to keep going."

In the harsh climate of Shimokawa, in northern Hokkaido, everyone wants a house that will keep him warm in the winter and cool in the summer. Local construction companies had acquired advanced technologies over the years to meet that need, but they were losing customers to the outside home builders.

Mr. Yamagata and his colleagues realized they were not competitive in the skills of design, making proposals and planning. So, they consulted with various people and were introduced to an architect working mainly in Sapporo. They decided architects and construction companies should team up, with each doing what it does best. 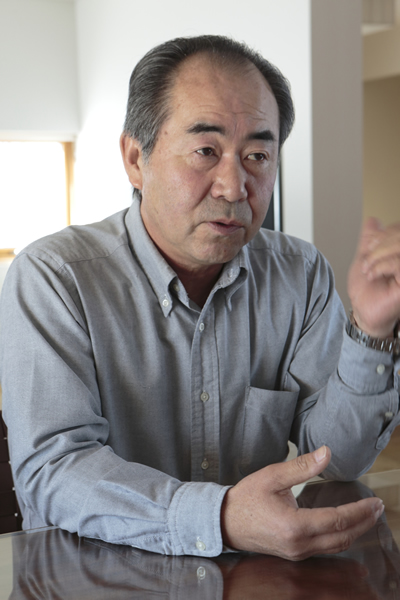 Yamagata Moriyuki of Yamagata Construction, a member of the Mori to Ie Project

Mr. Yamagata's efforts show his sense of mission and resolution as the owner of a local construction company.

The Mori to Ie project helps make Shimokawa a society and community where people can continue to live with peace of mind. It makes the most of the forest resources of Shimokawa and Hokkaido. It creates a lovable townscape. It allows comfortable living while reducing environmental burden. Project members use their own technology and experience for those purposes.
The local construction companies had almost never been involved with architects before, so when the work began, it was difficult for them to extract from the blueprints the intention of the architect and give it shape. They had a hard time.

Rather than simply doing whatever the architects say, the construction companies, which are well-versed in the climate of Shimokawa, sometimes propose changes to fit that climate. "When a project is finished and the architect and customer can both say, 'What a nice house,' that makes me happy," Mr. Yamagata said.

When many people came from the town and elsewhere to observe and we made new connections, it was one of the highlights of my life, Mr. Yamagata said. A feeling of excitement is essential to continuing to move forward. 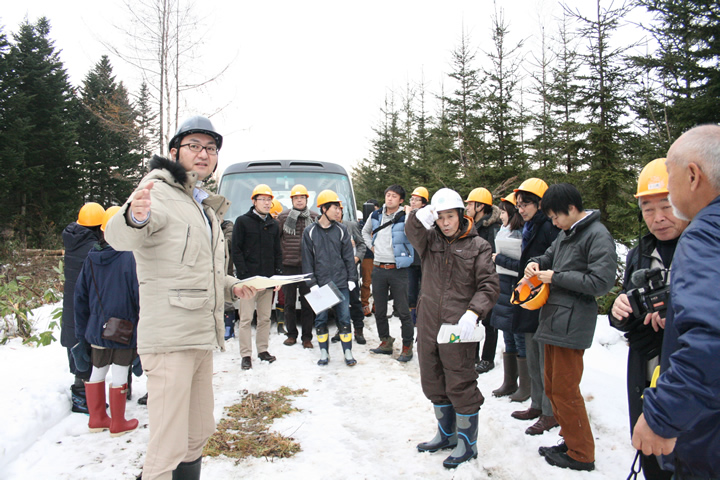 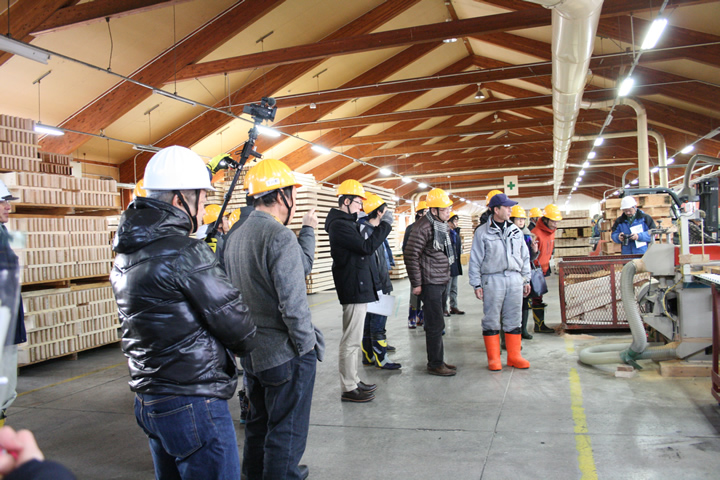 The "Homebuilding That Begins in the Forest” Tour was held in Shimokawa in November 2016. (Photo courtesy of Mori to Ie.)

Where businesses are born

We talked to one other person: Soma Shuji, the Mori to Ie Project coordinator at the Shimokawa Development Foundation. The foundation has a department called the Cluster Promotion Department, which was preceded by the Cluster Research Society established in 1998.

"Our organization lends a hand when town residents, either individuals or businesses, want to start a new business venture. We help with things like introducing human resources in the necessary fields and specialized formalities and applications. If there is a problem we can't solve in town, we get help from outside.
The Mori to Ie Project is one of the ventures we were consulted about. Everything the Cluster Promotion Department does is focused on involving local organizations and companies, revitalizing the local economy and making sure it keeps going, rather than on one company making a profit." 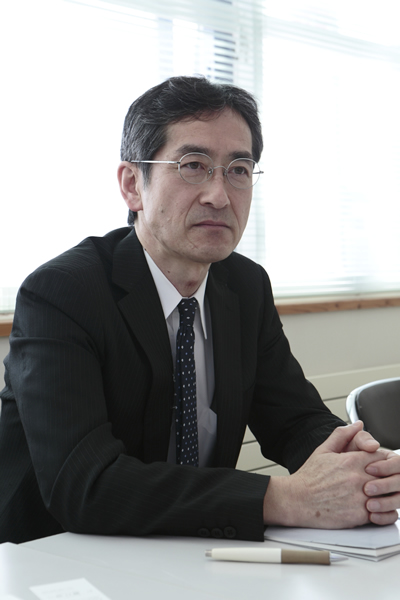 Mr. Soma, who provides ongoing support to new ventures in Shimokawa, also had this to say:
"In 1998 the Cluster Research Society was formed, and all kinds of people participated, including town hall workers, homemakers, company employees and students. Ideas that were born in that society came to fruition 10 or 20 years later. For example, ideas relating to biomass energy and measures to cope with migration that led to activities that were advanced even for the whole country of Japan. I think they all came about because of a sense of crisis that if things kept going the way they were the town would not survive."
"People in Shimokawa like new things; I think there are a lot of people who find first-time ventures interesting," Mr. Yamagata says.
I have the feeling I’ve found another source of Shimokawa's charm. 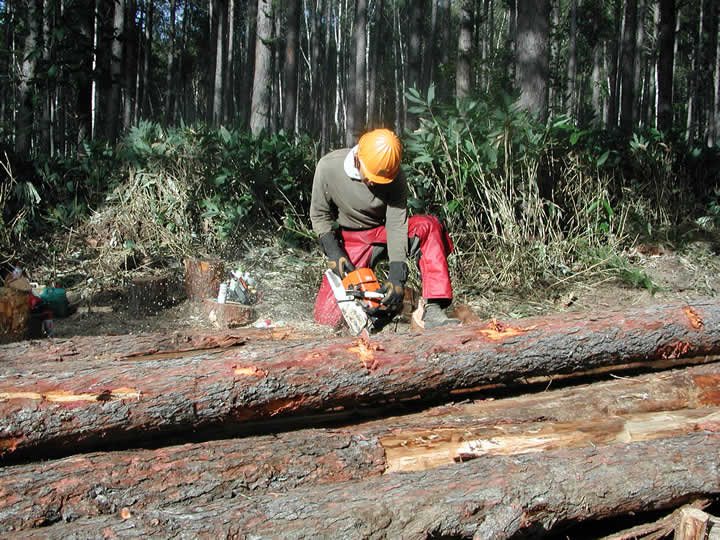 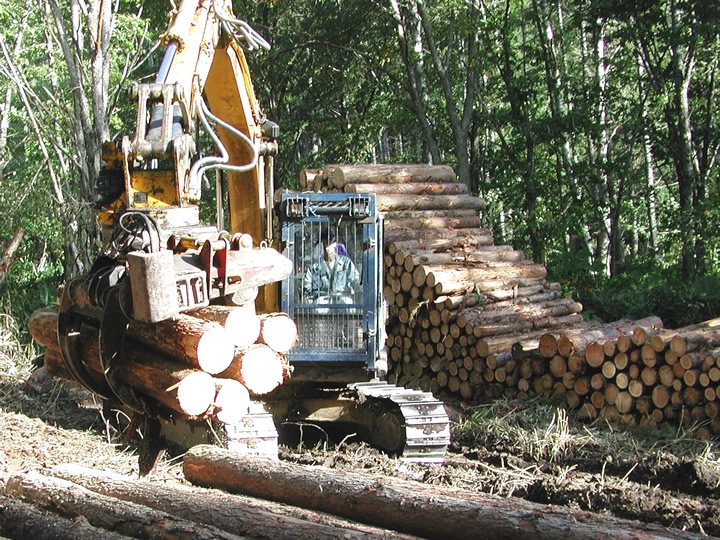 The Shimokawa Forest Owners' Cooperative takes work inquiries from throughout Japan, and people with no forest industry experience frequently apply and relocate to Shimokawa. (Photo courtesy of the town of Shimokawa.)

The project offers houses that make the most of the forests of Shimokawa and Hokkaido, with a threefold mission: 1. Developing human resources who protect the community, 2. spreading the creation of free and reliable home creation regionally, and 3. creating local flavor.
Website (Japanese)