Now and Then at Geshuku Ueno, a Boarding House Still Going Strong 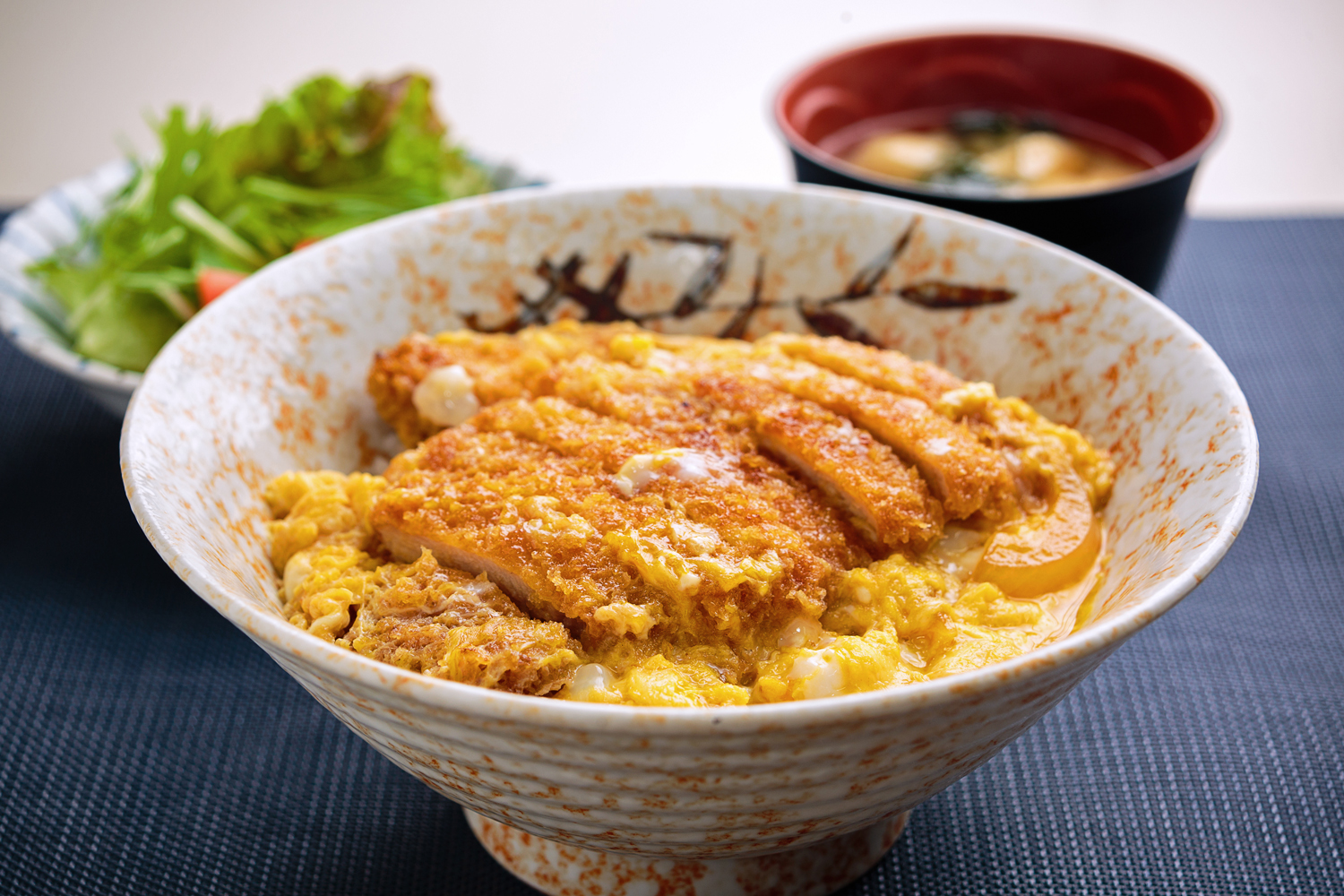 Located next to Hokkaido University, “Geshuku Ueno” (called “Ueno” for the rest of this article) has been home to many students over the years. Carrying on the business from his grandparents and mother, third-generation manager, YAMASHITA Masashi, tells us of his philosophy to support students “with food and shelter”.
Words by Aratame Nanae
Photographs by Kurose Michio
Translation by Xene Inc.

As we approach the entrance of Geshuku Ueno, Yamashita greets us at the door, wearing his apron. Entering the kitchen, we find freshly-fried cutlets stacked high. Tonight’s dinner is katsudon, a hearty student favorite of fried pork cutlets and egg on a bowl of rice. 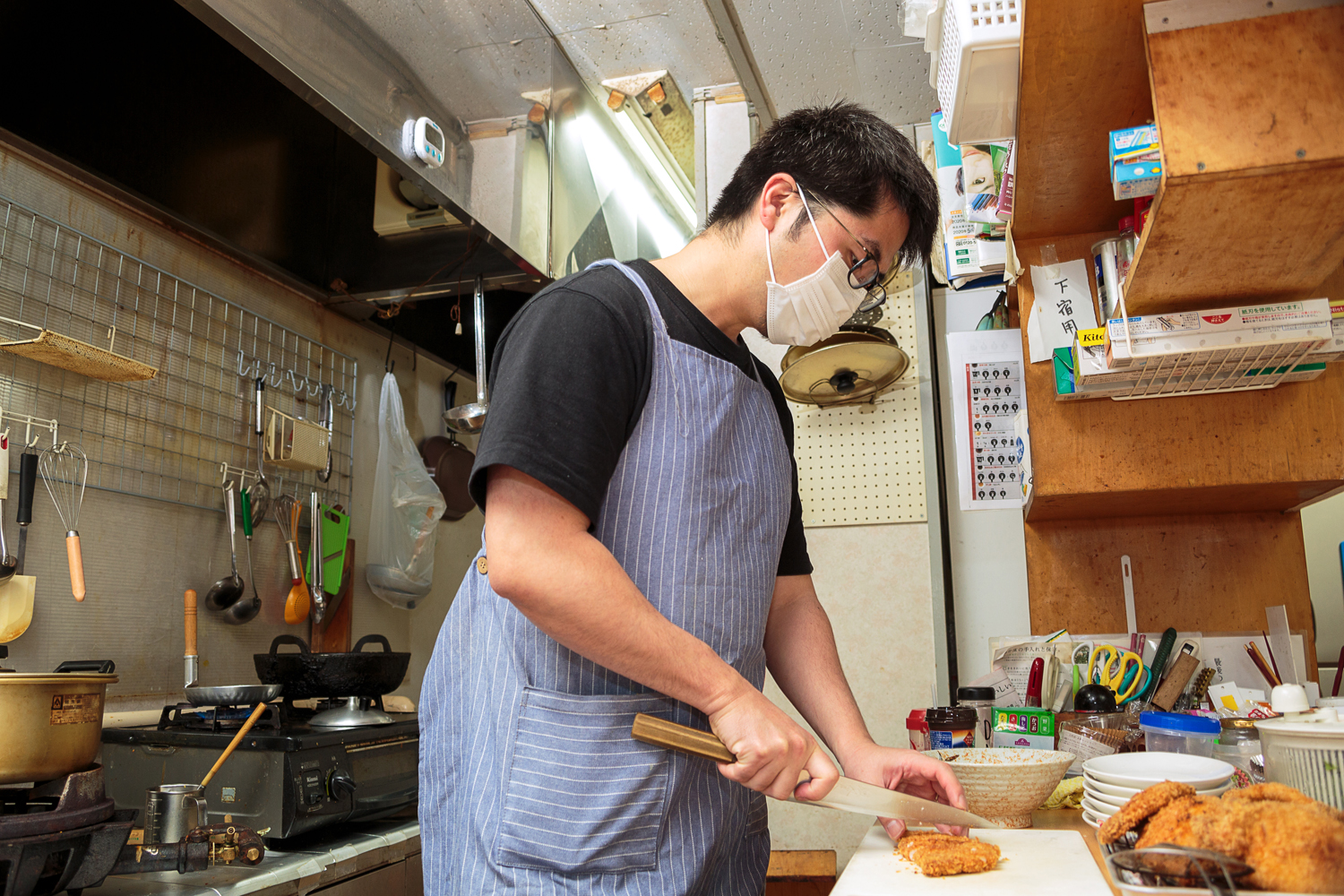 Yamashita prepares 30 to 40 servings daily, including residents of another facility he manages

Users of a Japanese “geshuku” boarding house rent a room and live together with the landlords and other tenants. Around the turn of the 20th century, there were over 1,000 geshuku facilities in Tokyo alone. However, the prevalence of these boarding houses has declined over the generations, with only 609 such facilities throughout Japan in 2020. Ueno carries on this proud tradition.

One of the greatest benefits of geshuku life is having breakfasts and dinners included. Masashi, who serves both as manager and cook at Ueno, studied cooking at a professional school in Sapporo, and went on to gain industry experience in Japanese, Chinese, and western-style kitchens. His mother and second-generation manager, YAMASHITA Akiko, is also a dietitian. Mother and son form a two-generation team of professional cooks. But, according to Masashi, he had not considered carrying on the family business until just a few years ago.

Ueno was founded in 1974. Its first-generation operators were Masashi’s grandparents, UENO Toshimasa and Miyoshi. With experience preparing staff meals for factory workers, Miyoshi dreamed of running her own boarding house. Together, they took up the challenge of opening a boarding house near Ueno’s current location.

Students of nearby prep schools and Hokkaido University created even more demand than expected, and before long, the couple had opened several geshuku-style boarding houses. Their original purchase of the land and new construction of the building connects to present-day Ueno. 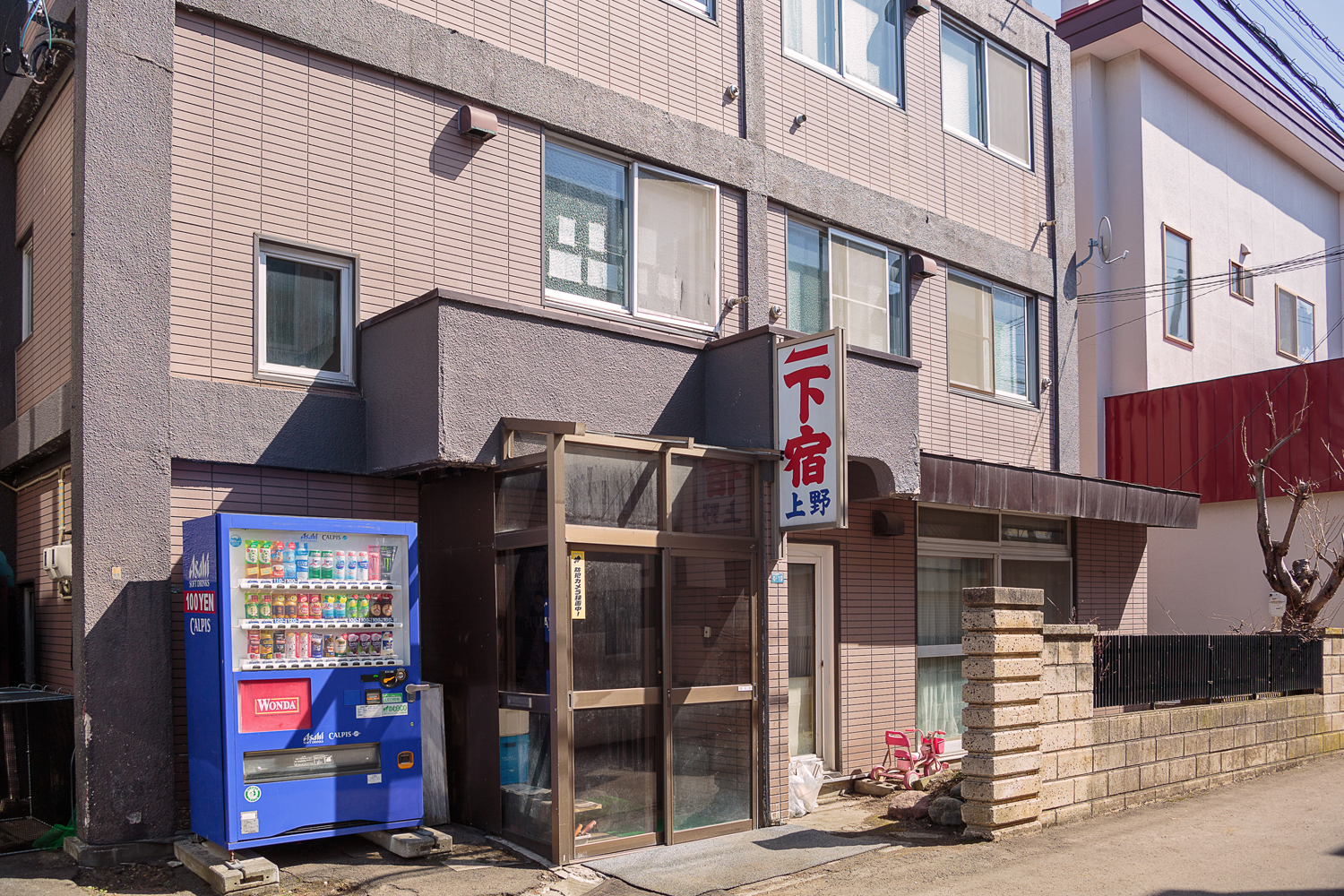 24-hour baths are another element of Ueno’s popularity

When Ueno was first built, Akiko was still in elementary school. “During enrolment season, there were lines and lines of students,” she recalls. Having helped out at the boarding houses since she was a small child, Akiko kept working even after getting married and leaving home. Taking young Masashi with her, she helped at the family boarding houses, mostly with cooking. However, despite this experience, she had many worries when her parents finally handed their business over to her. “I wasn’t confident about running a business,” recalls Akiko, “I’m glad that my son was willing to do it.”

We asked Masashi what inspired him to operate a boarding house.

Helping at the family boarding house between jobs

“I’d decided to leave the restaurant industry, and just thought of the boarding house as something to keep me busy while looking for my next job,” explains Masashi. 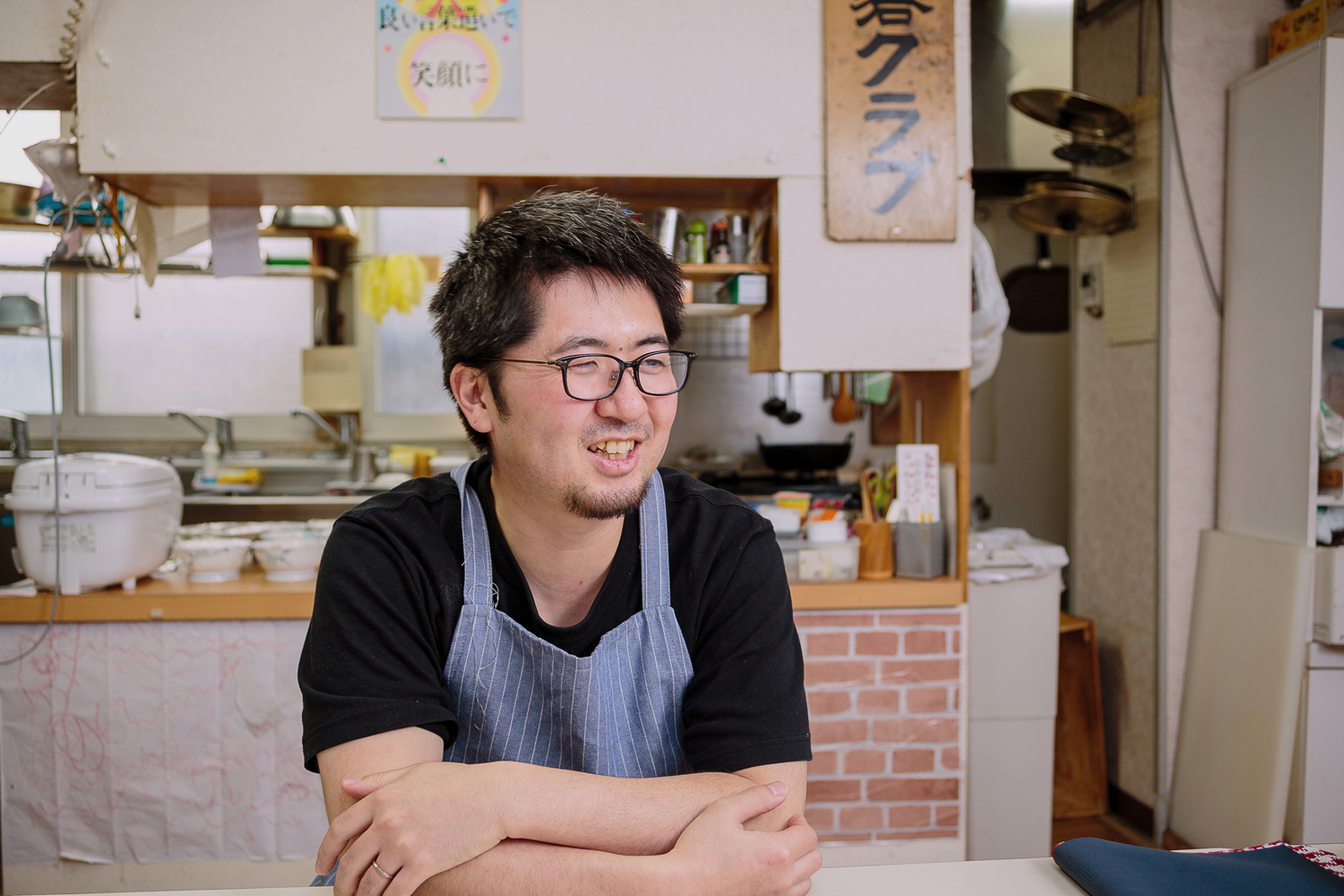 Masashi has nothing but fond memories of playing with Hokkaido University students as a child.

Masashi chose to enroll in a professional cooking school with the simple desire to gain a readily employable skill. He had never held a chef’s knife, but was surprised to find that cooking suited his personality. After graduation, he took a job at a yakitori restaurant in Sapporo. Later, he moved to the United States and worked at a yakitori restaurant in New York. His career also took him to Thailand.

In his mid-20s, Masashi temporarily returned to Japan, but was seriously considering permanently living overseas. To save money to go overseas again, he held positions in Sapporo including chef at an Italian restaurant, hall staff, and pastry chef. However, during this time, he met another chef who completely eclipsed him, both in skill and lifestyle. Realizing that he could never reach the level of his colleague, Masashi was heartbroken. This was when he had just been married at the age of 25.

At first, Masashi was somewhat reluctant to help out with the family boarding house, but before long, he took a strong interest. “I found preparing staff meals even more rewarding than cooking for guests. I enjoyed being able to ask them directly for opinions about the food, and watch their reactions as they ate. I came to realize that the boarding house environment made this possible.”

Cooking as a way to support others’ self-realization

Masashi now demonstrates all of the skills he gained in the cooking industry. “I go to the supermarket for ingredients daily, and decide the menu depending on what I find,” he remarks. 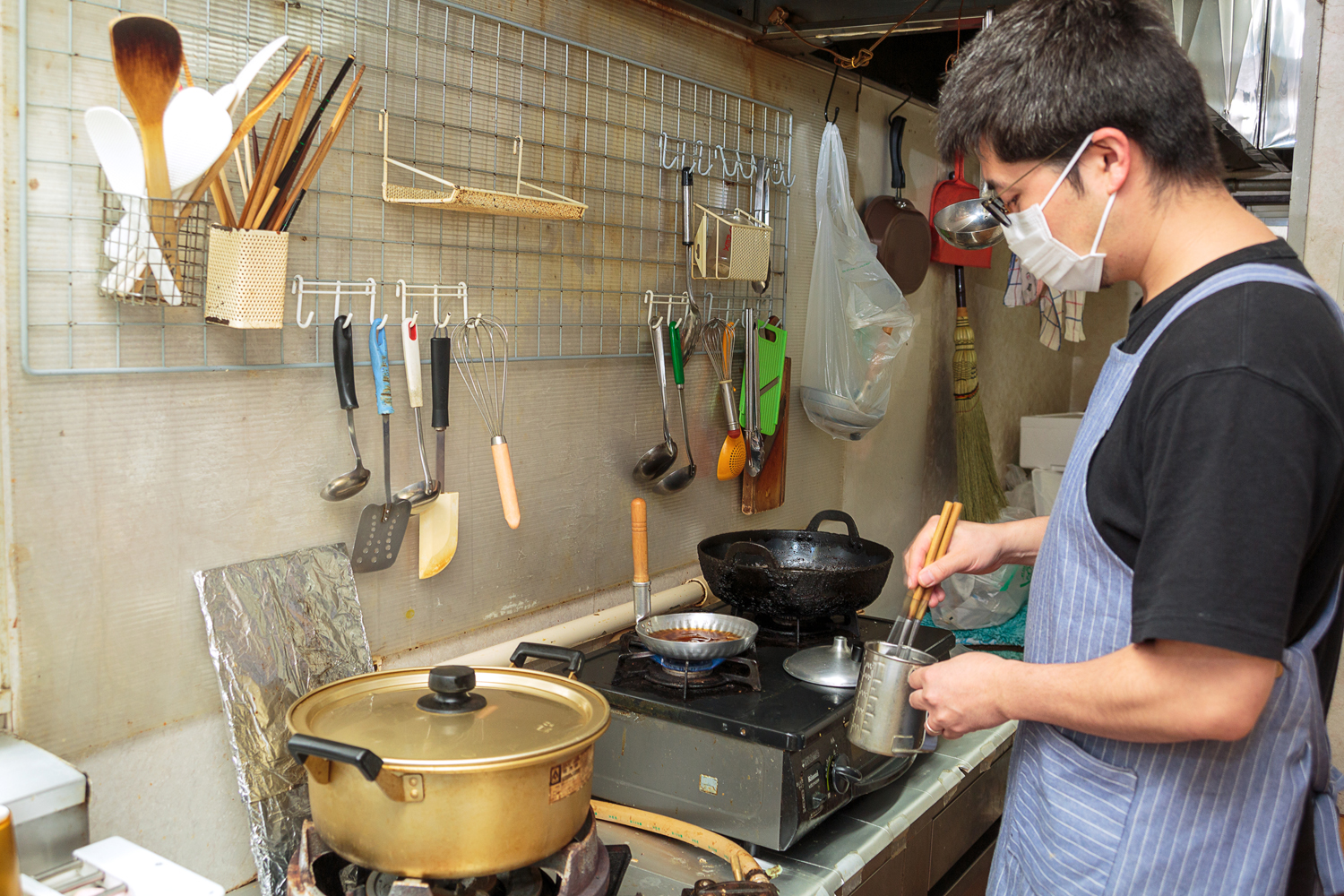 Sometimes, his relationships with lodgers continue even after they graduate. “Nothing makes me happier than hearing that a former lodger is now enthusiastically working.”

After discovering the joy of running lodging houses, Masashi started a new facility in 2016. “Chefie” is a shared house with meals provided. The name is a portmanteau of “chef” and “ie”, the Japanese word for house. “I wanted Chefie to be a place where lodgers could focus on achieving their goals, as I support their lifestyles through cooking.”

Through his boarding house work, Masashi has keenly felt the changing of the times. “When I was small, I often saw my grandfather scolding students. Now I appreciate that he was filling in for their parents, and understand that scolding was part of taking care of his customers. But, if I tried to emulate my grandfather today, people would avoid me… and perhaps it’s just not my style.” But, Masashi continues, “Since becoming a parent, I’ve come to realize that it’s also important to interact with people outside of your family and school, and experience their different ways of thinking. Boarding houses provide what people cannot live without – food and shelter. But they also provide this vital interaction. While boarding houses have changed in format to suit the needs of the times, I believe that they will continue to be a part of our society.” 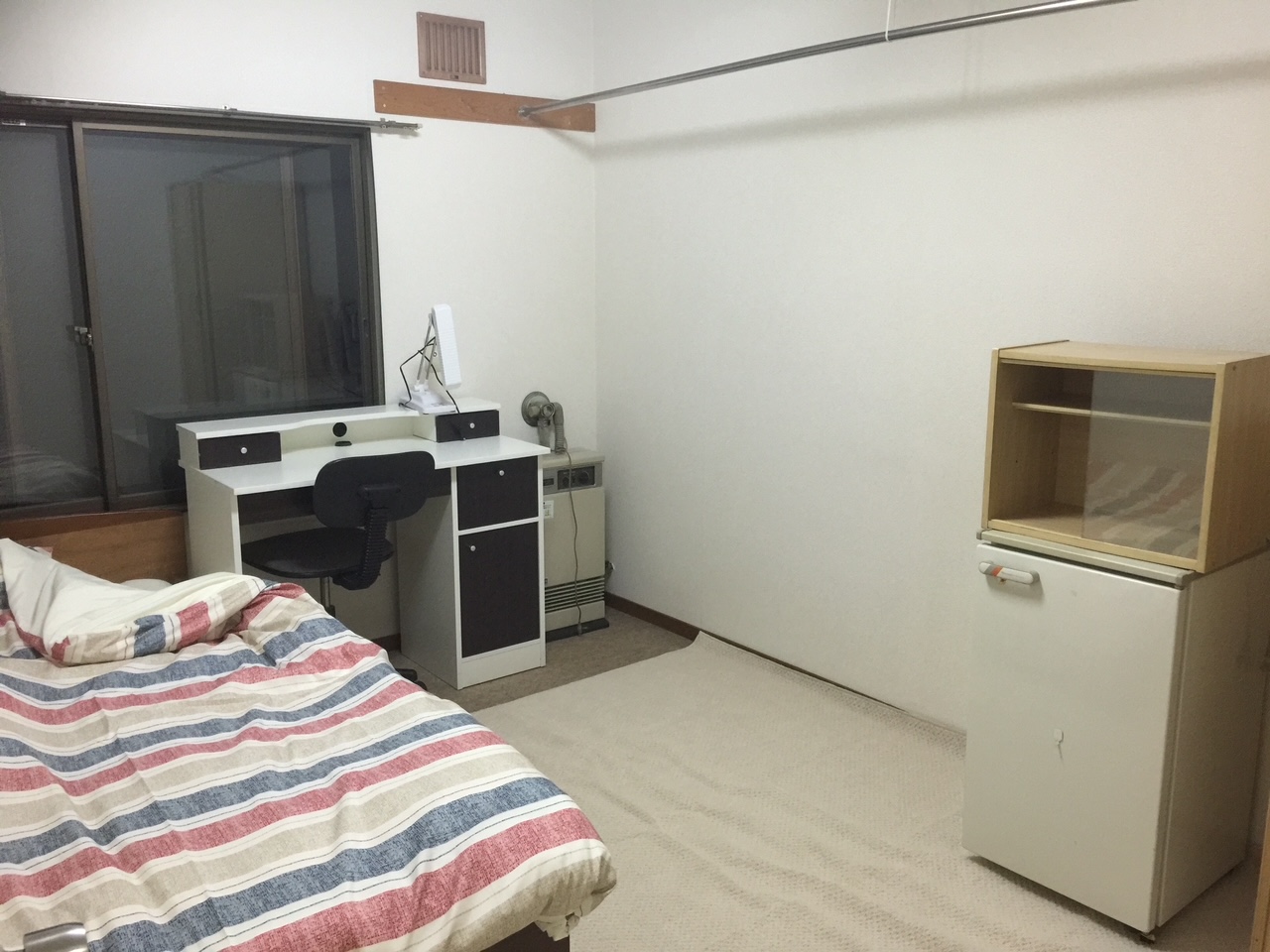 Masashi is also planning to rebuild, and is considering a second property exclusively for Hokkaido University students. (Photo courtesy of Geshuku Ueno)