The Secret of the Hokkaido University Dormitory Songs 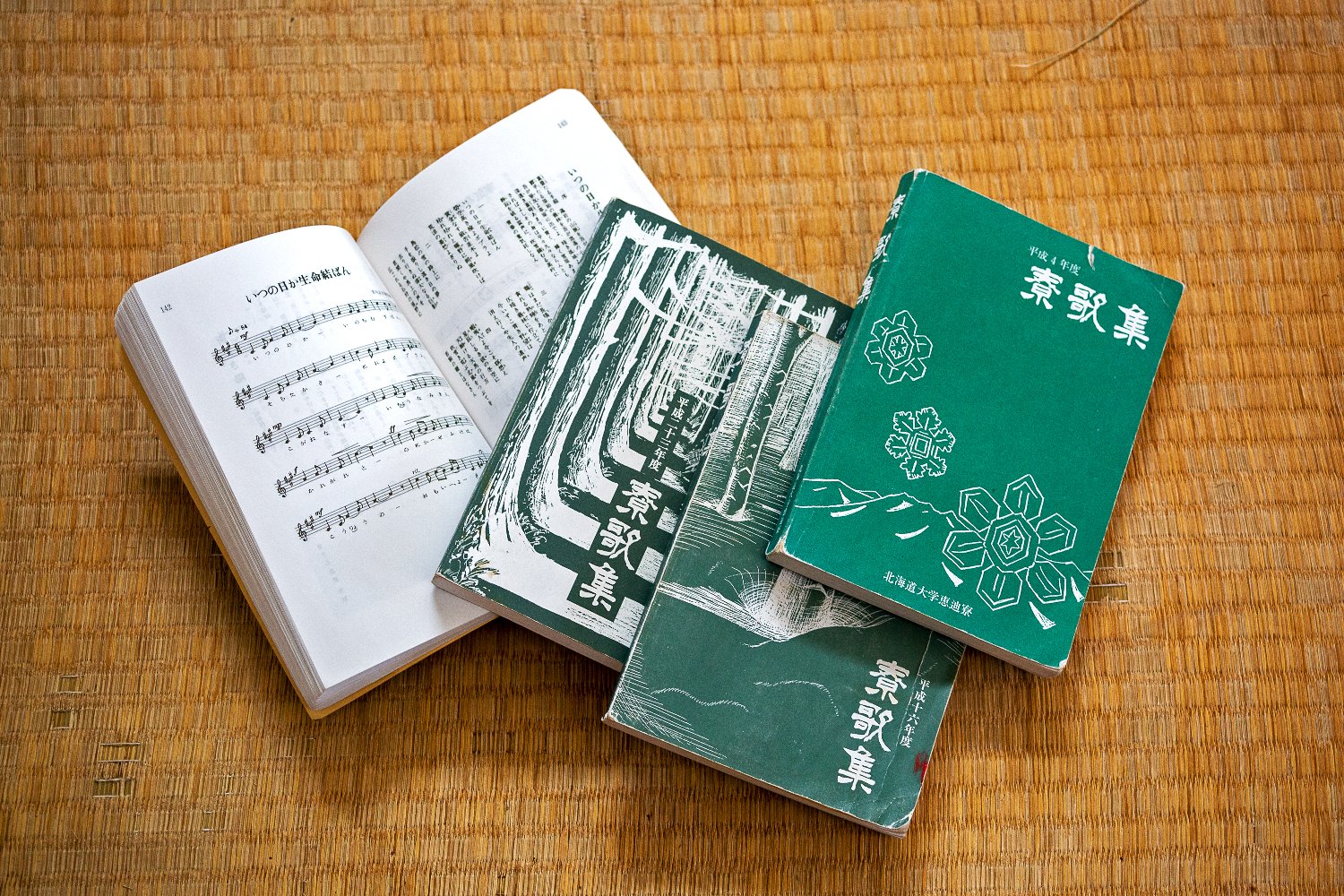 A collection of dormitory songs from Keiteki Dormitory, a self-governing dormitory of Hokkaido University, which is updated every four years.

“Miyakozo Yayoi” is a famous dormitory song of the Hokkaido University's student dormitory, Keiteki Dormitory. The song has been sung for more than 100 years. However, new dormitory songs are written every year, and now there are nearly 130 songs.
Words by Aratame Nanae
Photographs by Kurose Michio
Translation by Xene Inc.

The song "Miyakozo Yayoi," which describes the majestic nature and longing of Hokkaido in a high pitch, is known by many people, even non-Hokkaido University students. However, it is not well known that it was the sixth dormitory song to be written. 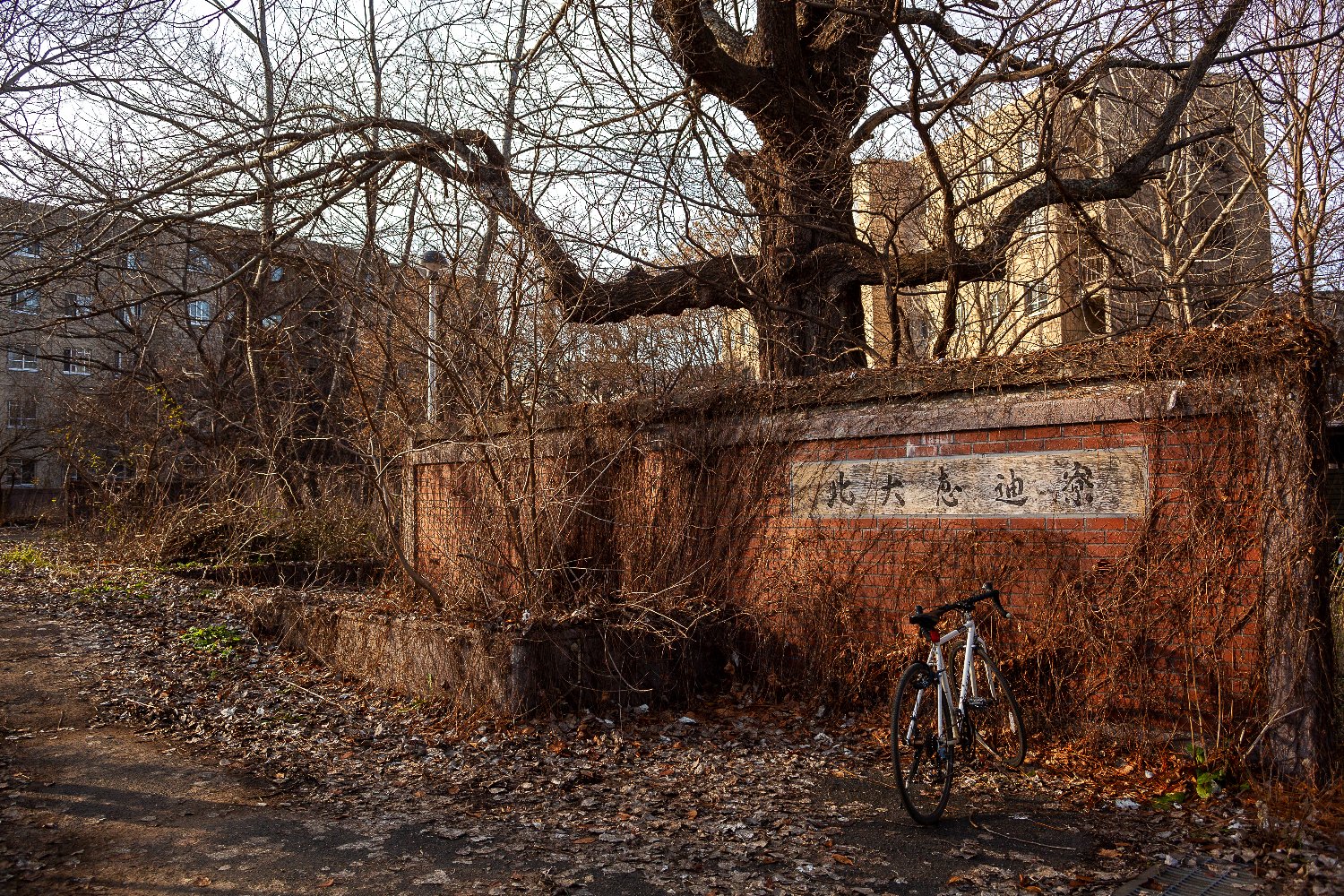 Keiteki Dormitory is located in the north of the vast campus of Hokkaido University.

"Miyakozo Yayoi” (Dormitory song of 1912)
The clouds of Yayoi in March are purple, and the scent of flowers drifts on the straw mat of the party.
Dark crimson for the never-ending indulgence, the colors changing at the end of spring.
A dream in the prosperity of the green for a moment, with my burning desires placed on it.
I long for the north, where the stars shine brightly, to be the pure land of the human world.

*You can listen to it on the YouTube playlist of the Hokkaido University Keiteki dormitory song collection application.https://www.youtube.com/watch?v=Nm4dRKp9x68 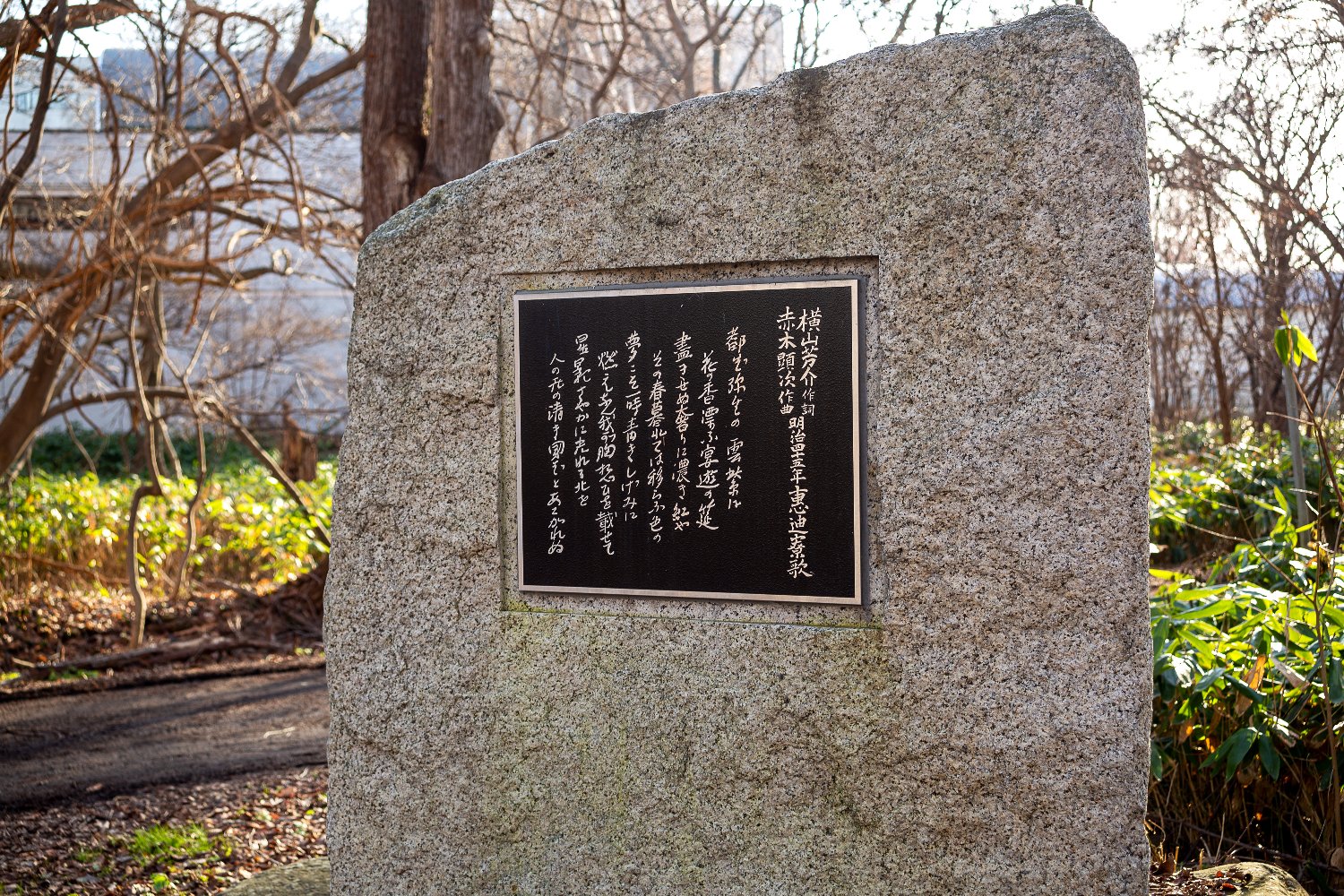 A stone monument to the song “Miyakozo Yayoi” near Keiteki Dormitory.

The tranquil melody of the song, as if slowly savoring the beauty of the north, has captured the hearts of many people.
However, in this day and age, how popular are dormitory songs with students?

Shishikura Itsuki, a first-year general education student and Kano Hiroto, a second-year student in the School of Law, both live in the Keiteki Dormitory. They say that they sing this song a lot. 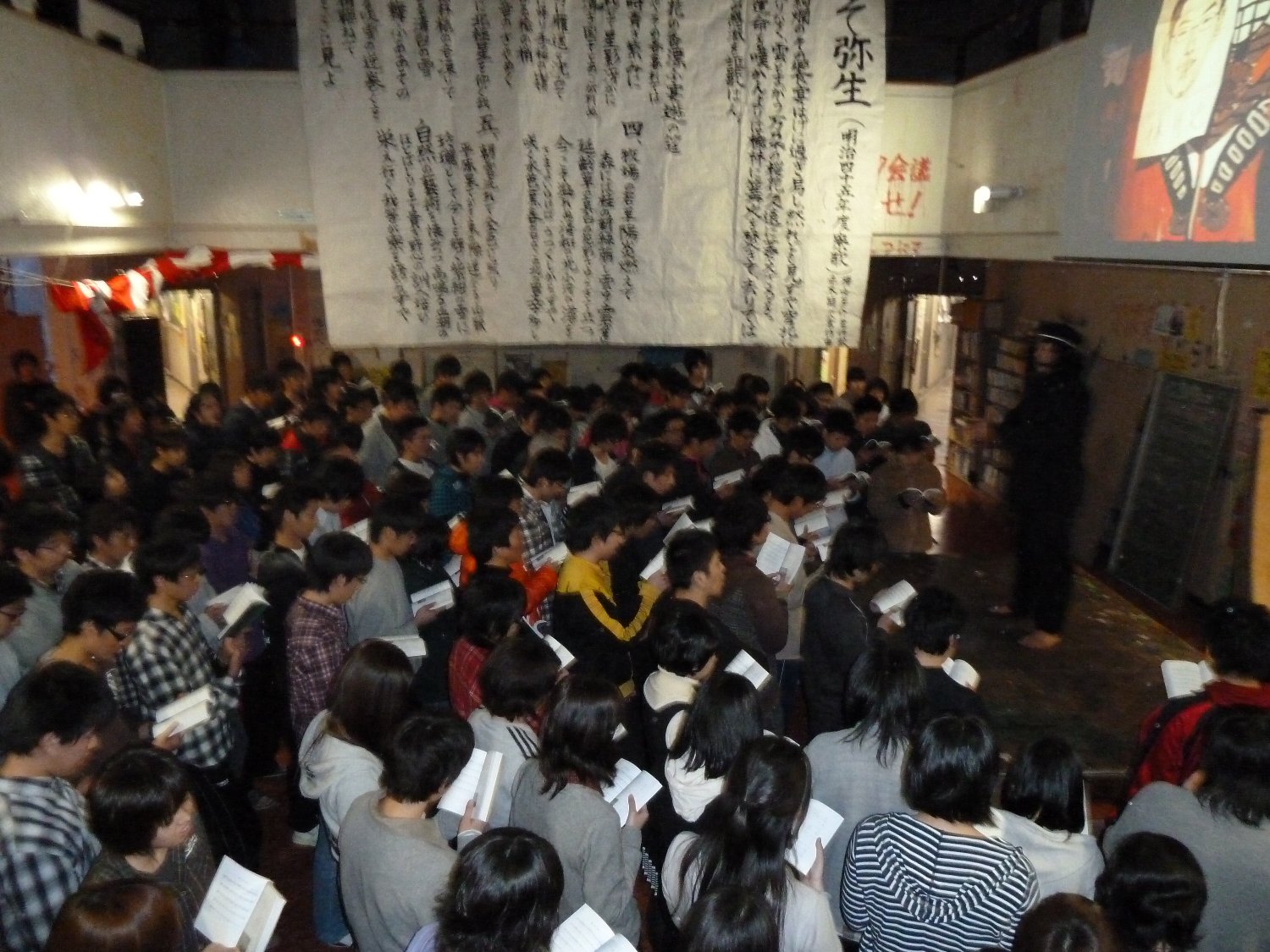 "We conduct dormitory song lessons on Sunday nights in the common building in the center of the dormitory. We pick up a few songs and provide information on the meaning of the lyrics and the historical background with skits," says Shishikura.
The skits have been handed down for years. The scripts are newly written each time. According to Shishikura, the scripts are based on sources such as reading dormitory history and letters including stories about the birth of the dormitory songs from the authors.

Shishikura's first exposure to Hokkaido University dormitory songs was in the summer when he was in his 2nd year of high school in Chiba Prefecture. The day he visited Keiteki Dormitory happened to be the day of an event for the promotion committee, and he sang a few songs without really understanding them, which was a fun experience. 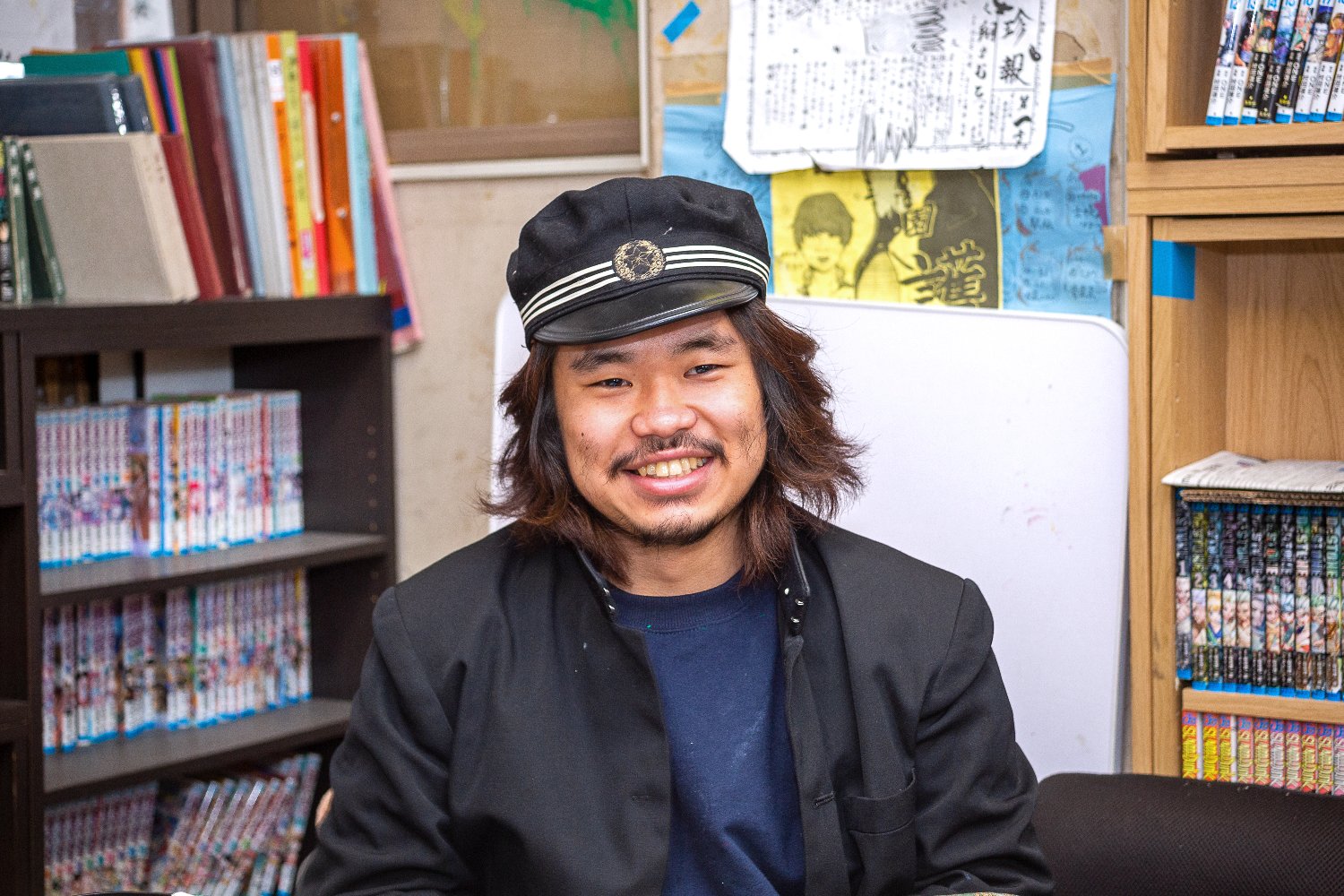 When we asked him about the fascination behind dormitory songs, he said, "Dormitory songs are a simple way to make life in the dormitory fun and exciting with your friends."

About 360 students of different ages and majors live together in Keiteki Dormitory. Many of them are from outside of Hokkaido, and they may feel a little uneasy living in an unfamiliar place at times. The dormitory song has always been close to the hearts of these young people, providing them with inspiration.

The new dormitory song will be announced during the Dormitory Song Festival held as part of the Keiteki Dormitory Festival in autumn. In 2021, there were three candidates for the song, and the dormitory students voted to choose "Kita Arashi".

The song was written by Kano. In fact, Kano also composed the 2020 dormitory song "Karasu no Kage," making him one of the few composers in the history of dormitory songs to write songs two years in a row.
As a former member of a brass band, Kano says, "Sounds come to me easily." The lyrics were written by Yoshino Moe, a third-year student in the School of Humanities and Human Sciences. She is from Aichi Prefecture, the same prefecture as Kano.
"It's an interesting concept for a dormitory song, and I thought it would be a shame for this song not to be heard, so I took on the project of making it." 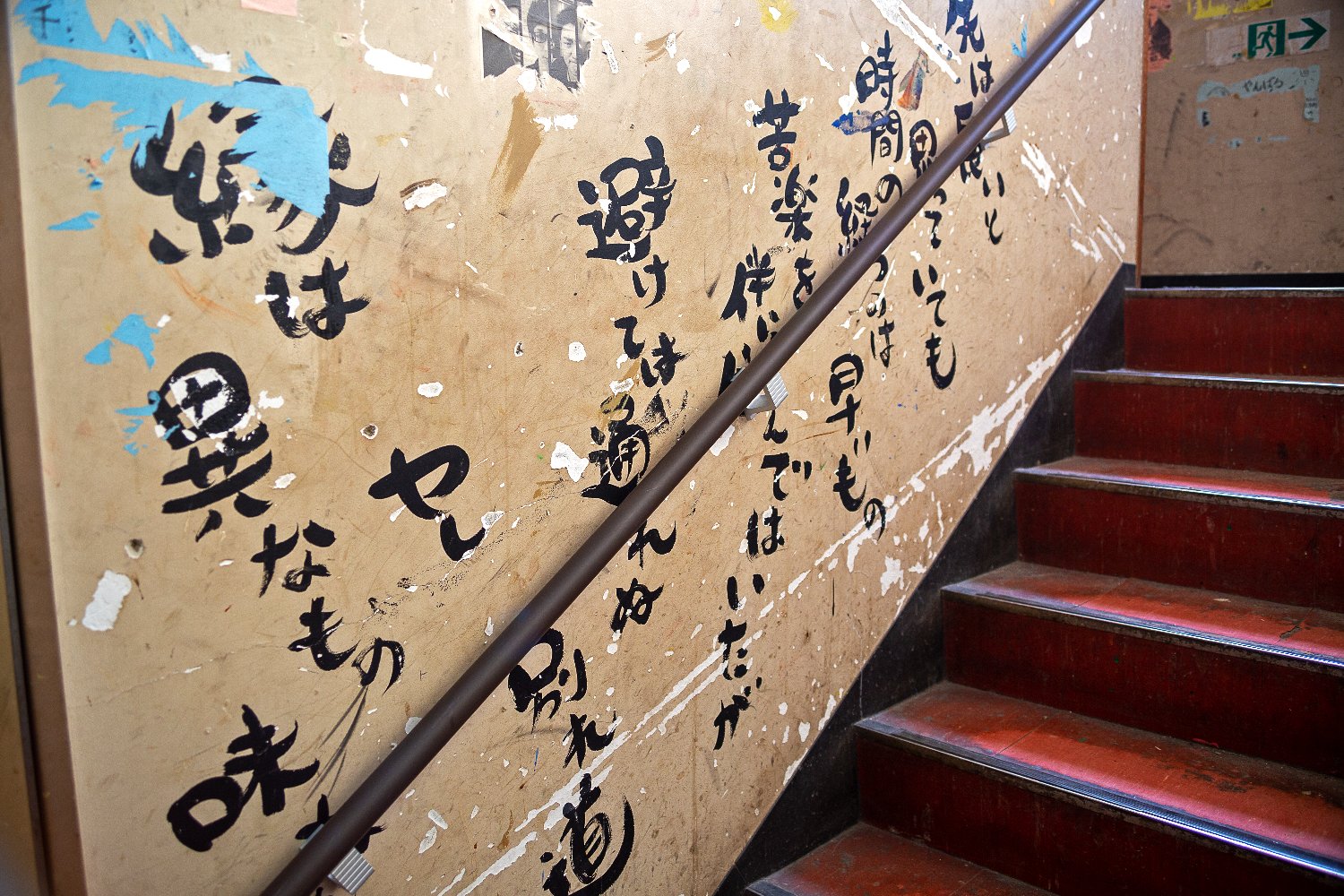 The two of them said that they usually listen to dormitory songs casually, but when they heard it for the first time, they were puzzled. Tominaga Yuma, a third-year student at the School of Law and one of the executive committee members who told us about the current situation of Keiteki Dormitory, also laughed when he first received instruction on the dormitory song, saying, "I thought it was old-fashioned."

Yoshino recalls, "It was impressive to see dormitory students remembering the same songs and singing many of them out loud during these times when everyone has such different tastes and interests."

Kano said that the culture of dormitory songs is "special to all the dormitory students, and it is a very wonderful thing that has continued for a surprisingly long time." Meanwhile, Yoshino said, "The dormitory history can be seen as a different kind of history book, which reflects the characteristics of the times."

Getting closer with the songs through the dormitory song app

You can check the year of production and lyrics of old dormitory songs with the Hokkaido University Keiteki Dormitory Song Collection App. The app was developed by Murahashi Kuriki, an academic researcher in the doctoral course of the Graduate School of Science at Hokkaido University, who served as the 300th head of the dormitory in 2012 when he was in his third year. 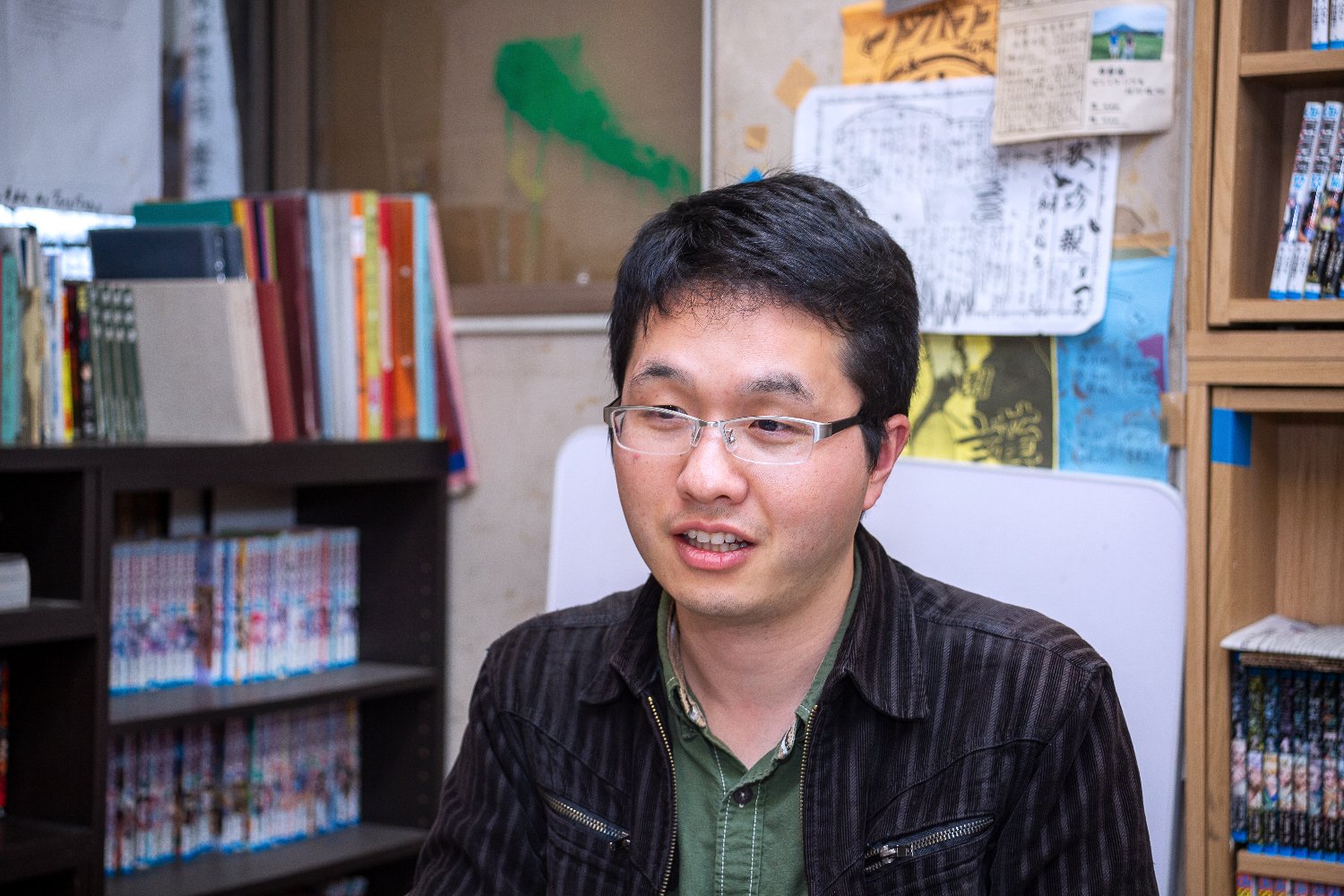 The idea came from thinking that it would be interesting to be able to check the lyrics on a smartphone from an old collection of dormitory songs. The app contains about 180 songs, including all the dorm songs, songs of each club activity (club songs), and pep songs.

Murahashi also looks back on the first time he received instruction in dormitory singing 12 years ago. "I was surprised to see upper-class students in school uniforms singing shoulder to shoulder. The experience of just starting university and singing in chorus with upper-class students was very moving for me."
He got more and more opportunities to hear from various generations, and realized that dormitory songs are an important tool to communicate with people regardless of age or position. "What's interesting is that each generation is particular about the way they sang the songs and the atmosphere, and they feel that the songs are their own with their own unique characteristics. What they have in common is their love for dormitory songs." 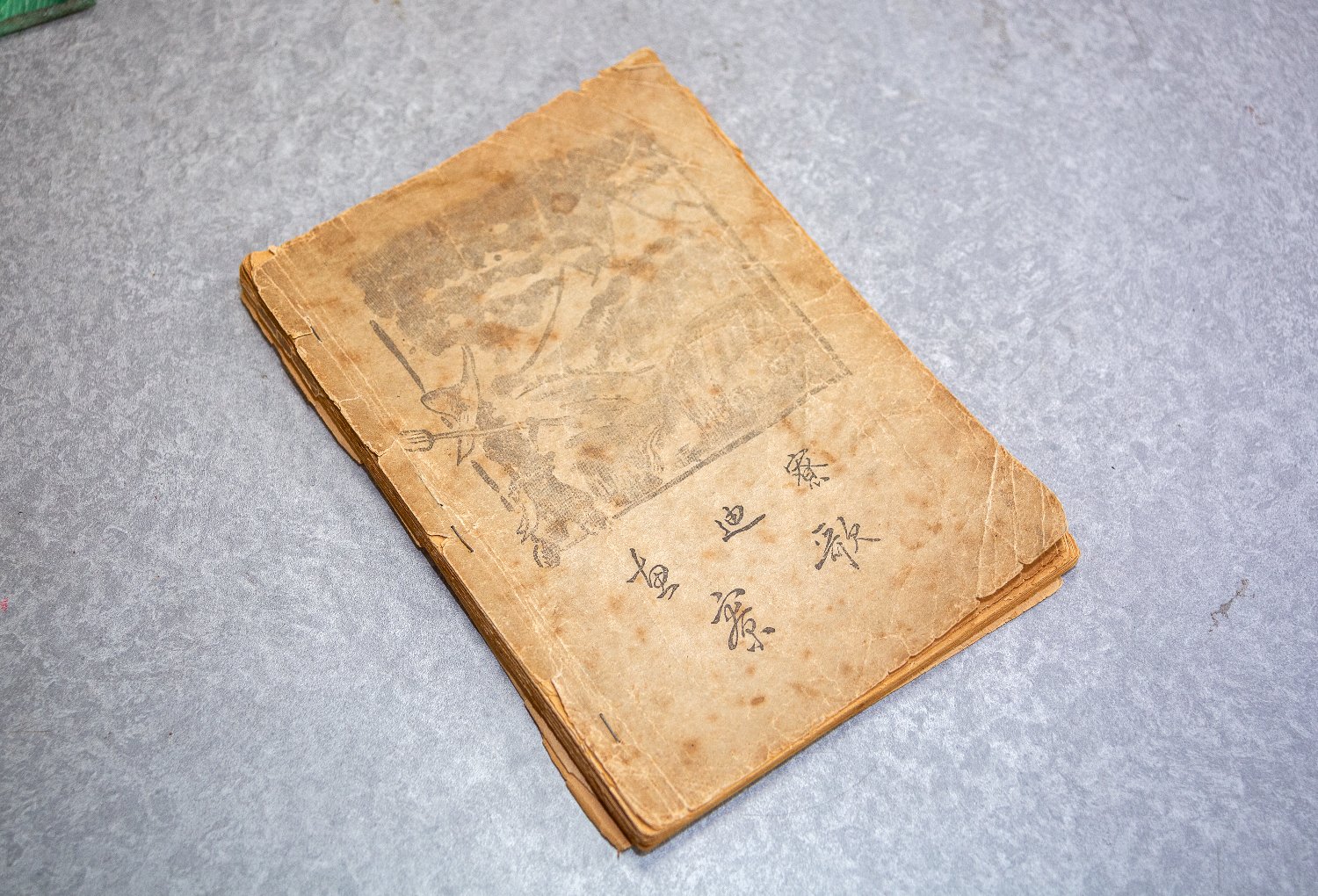 A collection of dormitory songs from 1943 donated to Murahashi.

Murahashi says the reason why the dormitory song app is not limited to dormitory students and alumni, but is widely available to the public free of charge, is because, "I want everyone to know that mysterious uplifting feeling of the songs."
He adds with emphasis, "For more than 100 years, the dormitory is the only one to have been creating unique original songs every year, and I want people to feel the weight of the history that continues to this day and enjoy the songs in a casual way."

The songs fostered at Keiteki Dormitory will still be sung in Hokkaido University 100 years from now.