Transformation from Terroir into a Neighborhood: Hokkaido University Marché Evolves and Becomes a Part of our Everyday Life 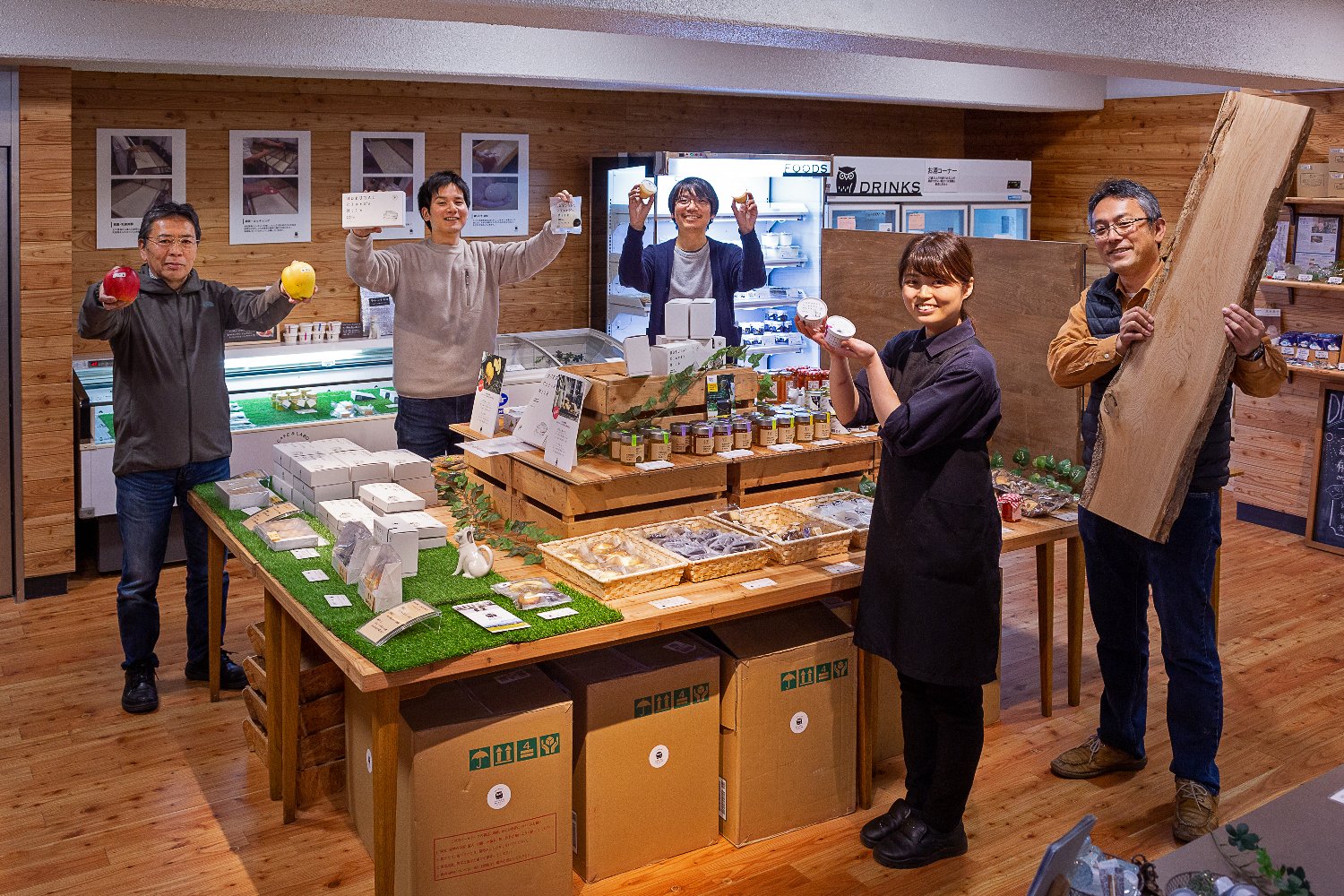 Small tents are lined up with vegetables of various colors on display. The shopkeepers speak passionately about their crops and the region, and the customers think about what to make for dinner tonight. Such a scene was a tradition at Hokkaido University every summer. We visited the current Hokkaido University Marché, which has evolved from an open-air market to a café, and then to an awards event, while expanding its reach in the neighborhood.
Words by Hasegawa Michiru
Photographs by Kurose Michio
Translation by Xene Inc.

Linking production, distribution, and consumption together

Why is it that there is so much that we don't know about food when it should be so close to us? There are people who are working hard to bridge the gap between production and consumption.

A marché was held on the campus of Hokkaido University every year from 2009 to 2019. A marché is an open-air market lined with small stalls, and it is a well-established culture in France, where it originated. 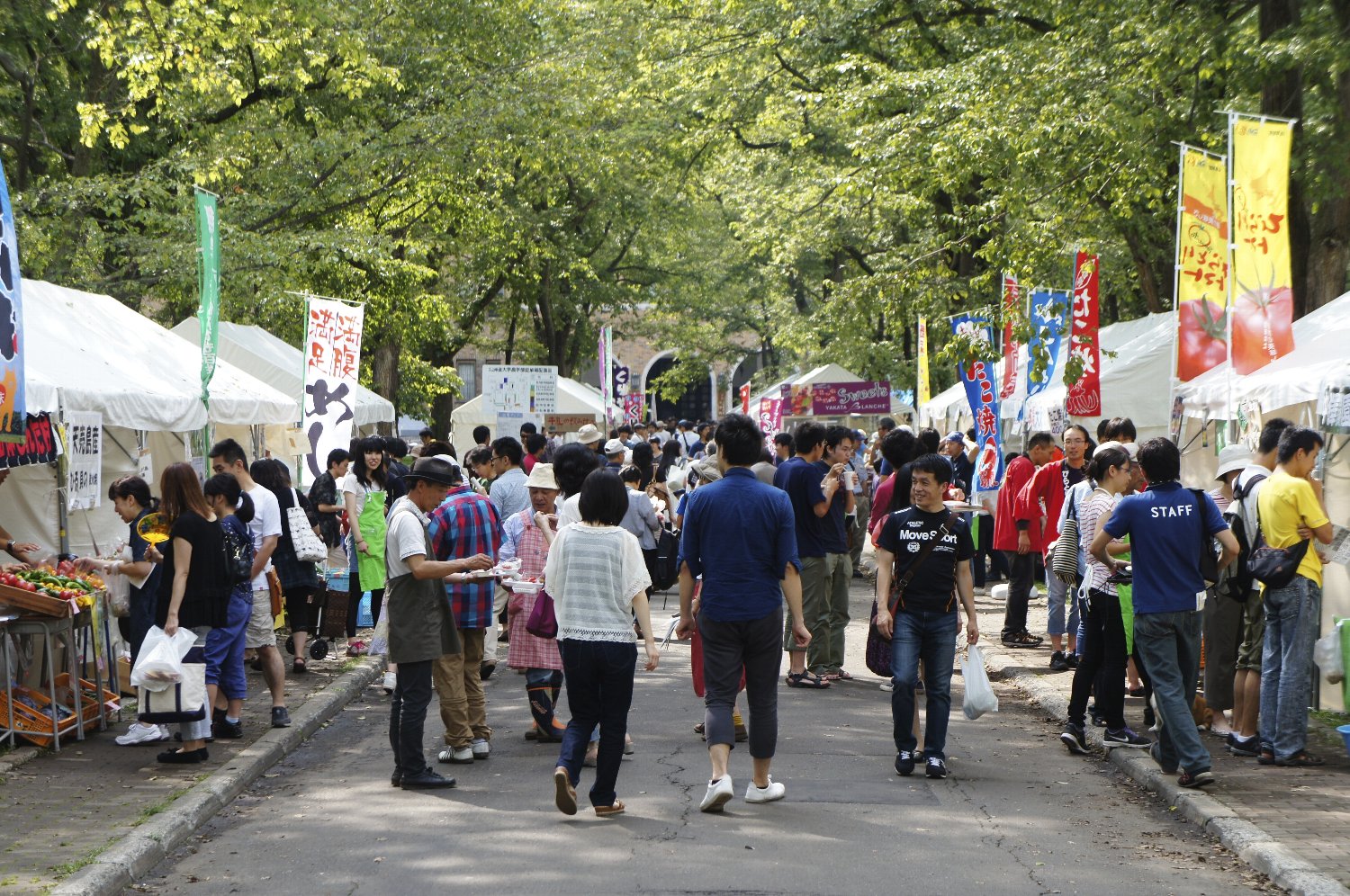 The Hokkaido University Marché used to be held every year in August. At its peak, 40 booths lined the streets, attracting about 10,000 visitors over two days. What significance does a marché have in an educational setting?

"The Hokkaido University Marché was started with the goal of linking production to consumption. The idea came from the agricultural training that is part of the education. In our ongoing interactions with farmers, we realized that the production sites were facing many problems. At the same time, we began to feel that their actual situation was not being conveyed to consumers." 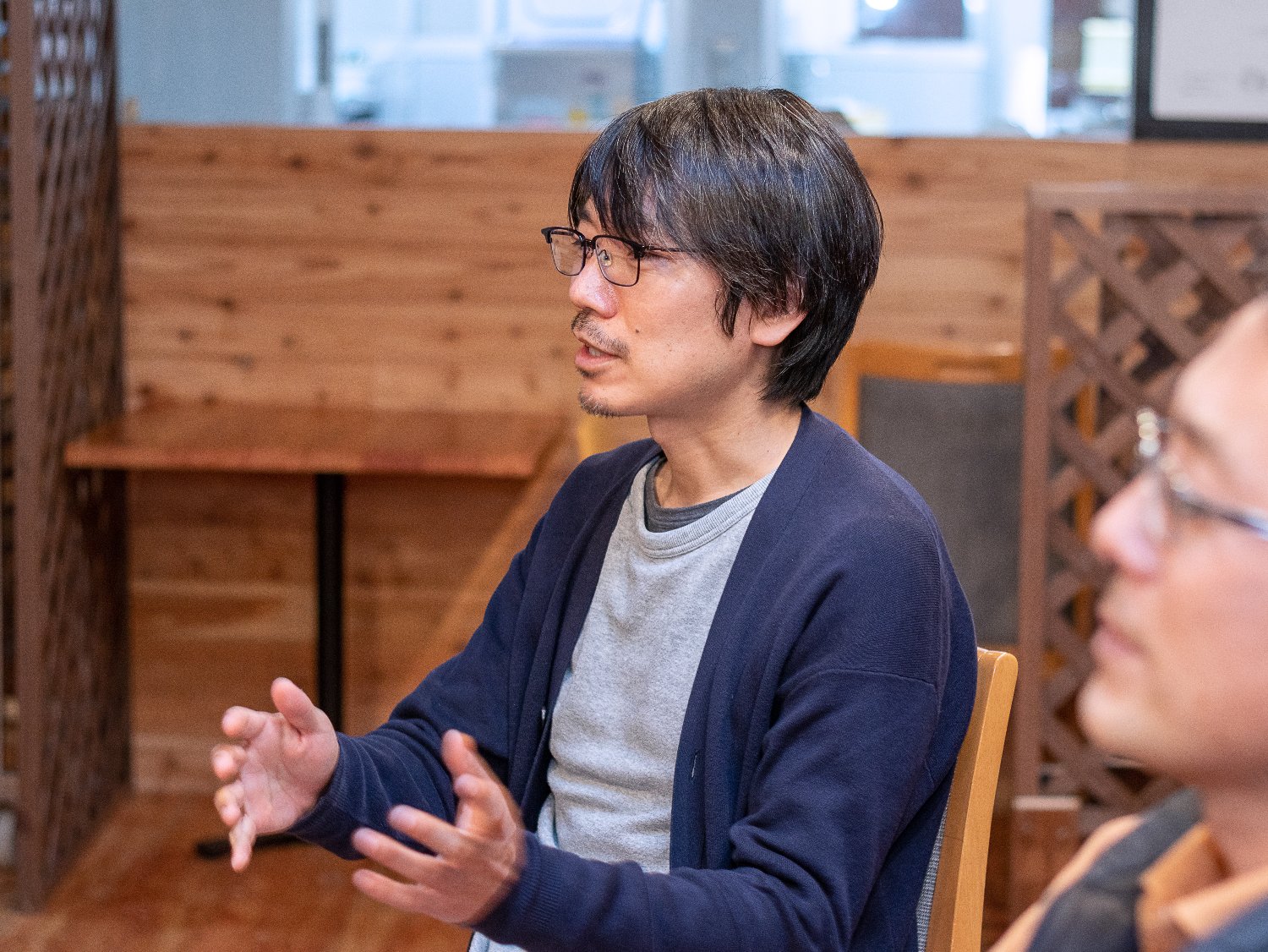 There are many issues facing agriculture. For example, there is the dilemma of the decrease in rural population due to the expansion of scale. While mechanization and division of labor are increasing in efficiency, the working population is steadily declining.
At the same time, "There has been a gap between agricultural education and production sites," said Kobayashi. Students have the potential to shape the course of Japan's food and primary industries, including agricultural and rural policies. In order for these students to serve as a bridge between consumers and production sites, he believes, "We need opportunities for the students to get out of the classroom and learn about production, distribution, and consumption in an integrated manner."

Around that time, there was an opportunity to exchange opinions on regional industries transcending the boundaries of industry and business in the Okhotsk region which Kobayashi and Mitani participated in. While exchanging opinions, they decided to participate in a tour to visit a farming village in France.
The two witnessed a sustainable agriculture based on local resources and climate in the Alps region of southeastern France as well as a marché that directly connects farmers and consumers. They also learned about the concept of Terroir.

After returning to Japan, they started to create a new educational program. Utilizing a support program from the Ministry of Education, Culture, Sports, Science and Technology, Hokkaido University, Rakuno Gakuen University, and Obihiro University of Agriculture and Veterinary Medicine established a graduate education program called Food Safety Science organized by the three universities, and Hokkaido University Marché was born as a course open to all graduate students. 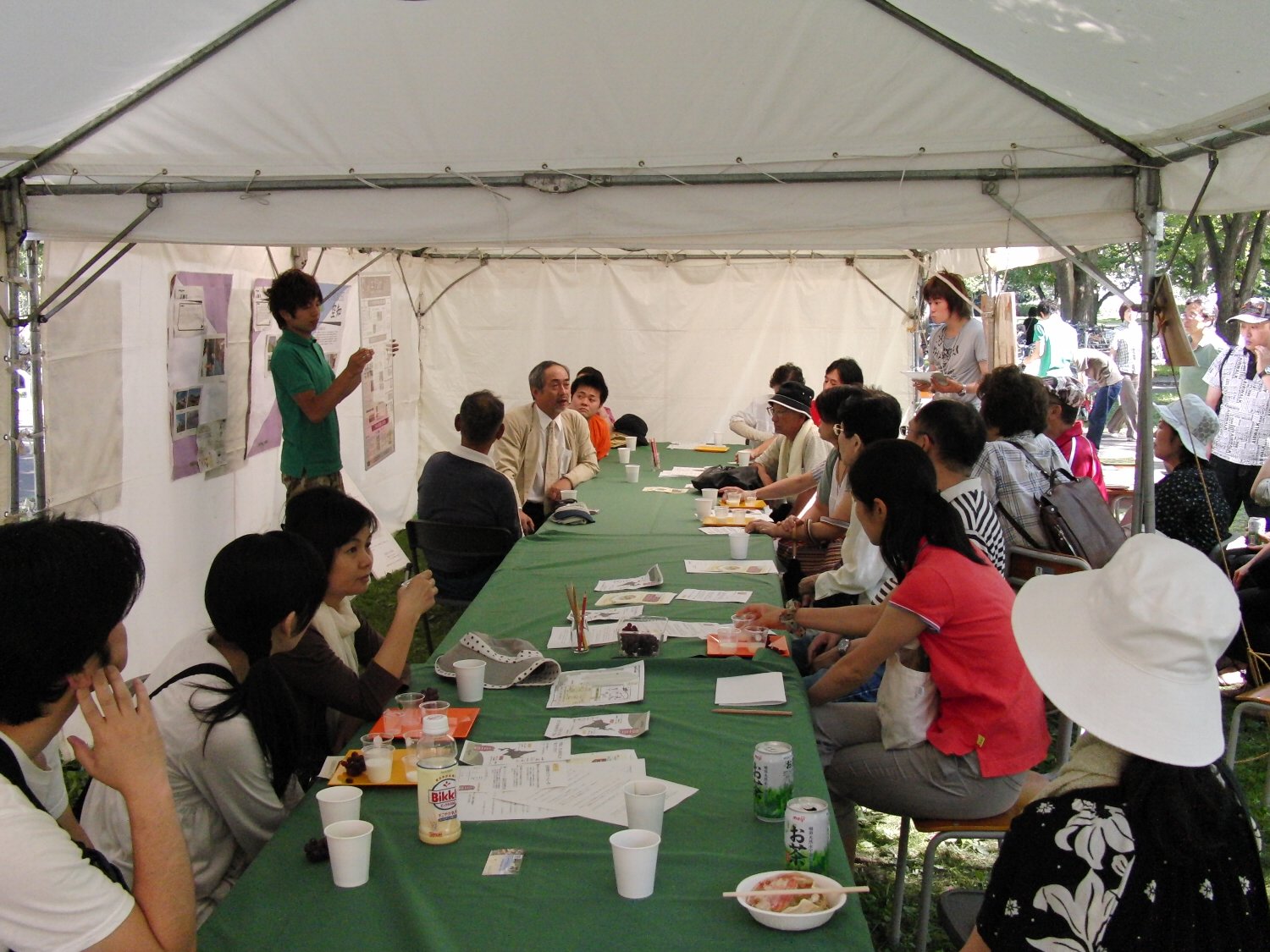 The Hokkaido University Marché features a number of projects that give a sense of the concept of Terroir.(Photo courtesy of Kobayashi Kuniyuki)

The word Terroir is derived from the French word terre (meaning land) and refers to all the characteristics of the production area and the cultivation environment.

Mitani explains, "In Japan, the term fudo (meaning natural features of a region) can be used to describe it. Temperature, humidity, soil characteristics, and more broadly, history and the people who live there can also be elements of Terroir." 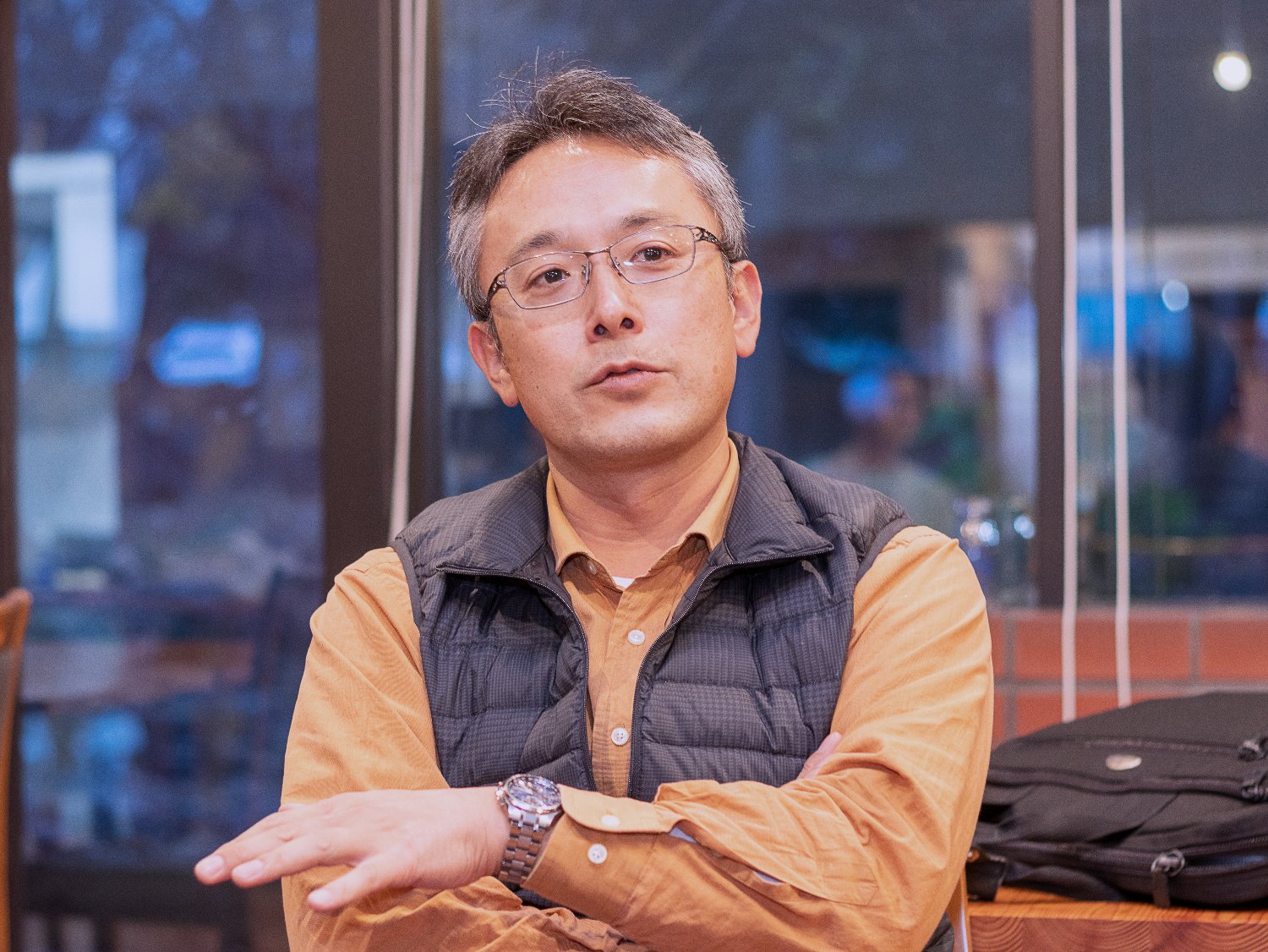 Mitani, who has specialized in the field of dairy farming, says, "The issues we have experienced since we started the Marché have not changed much. Is mass production and consumption really sustainable agriculture? I feel as if we are drifting away from the natural land conditions that the Japanese people should have."

These issues are also faced by consumers. Have we thought about who makes our food, the process by which it is made, and what the price means?

Those who see the future in the Hokkaido University farms

In order to close the physical and mental gap between production and consumption as well as agricultural education and production areas, and to better embody the concept of Terroir, the Hokkaido University Marché decided to end its open-air market format in 2019. Currently, the marché has a permanent location as the Hokkaido University Marché Café & Labo. In addition to agricultural products as well as products developed and crafted by farmers themselves, they also offer products from the fishing and forestry industries. 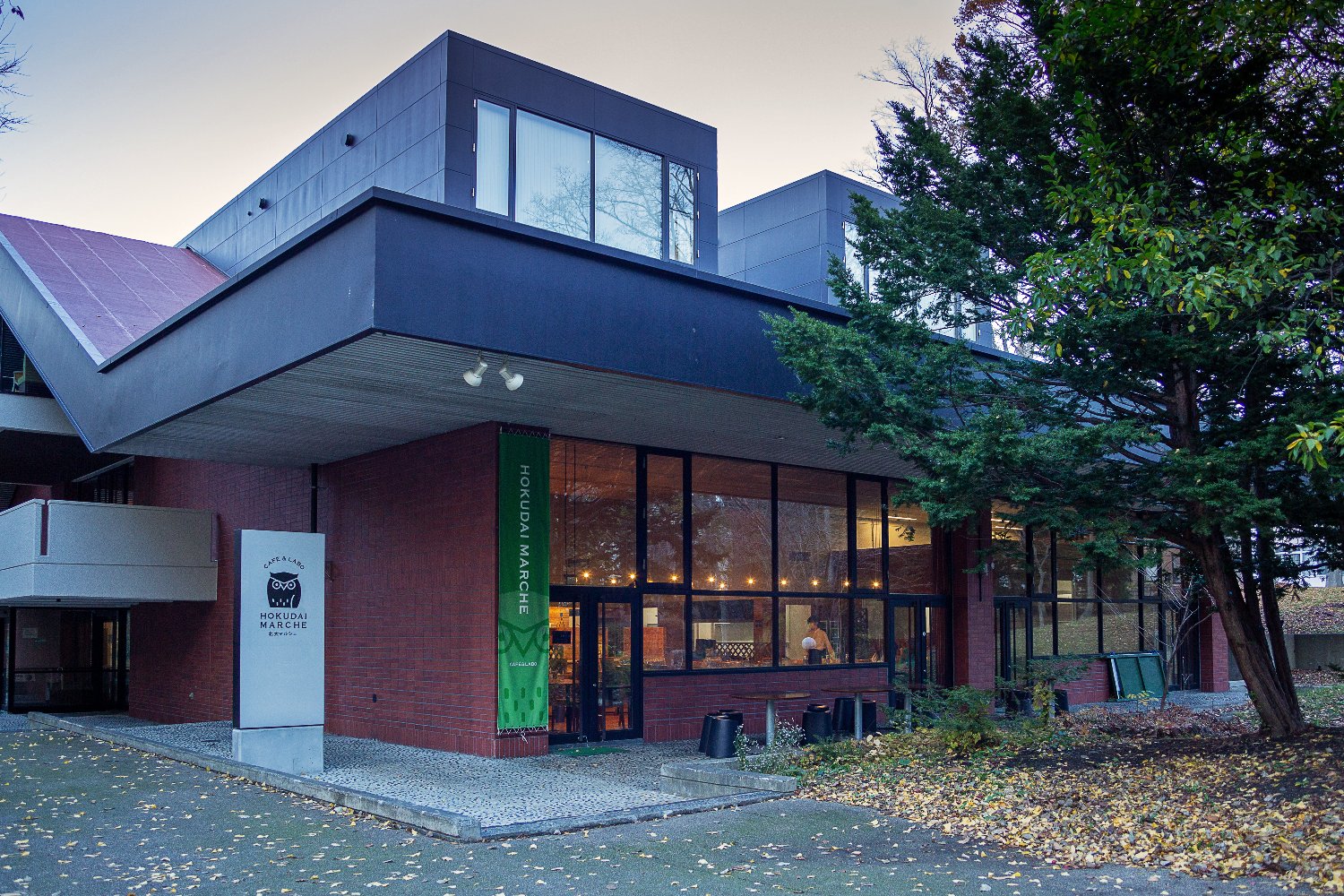 Kobayashi explains, "This is an experiment to see how we can incorporate the concept of marché and Terroir into our daily lives. It's an attempt to go back to basics and rethink what we really want to convey." 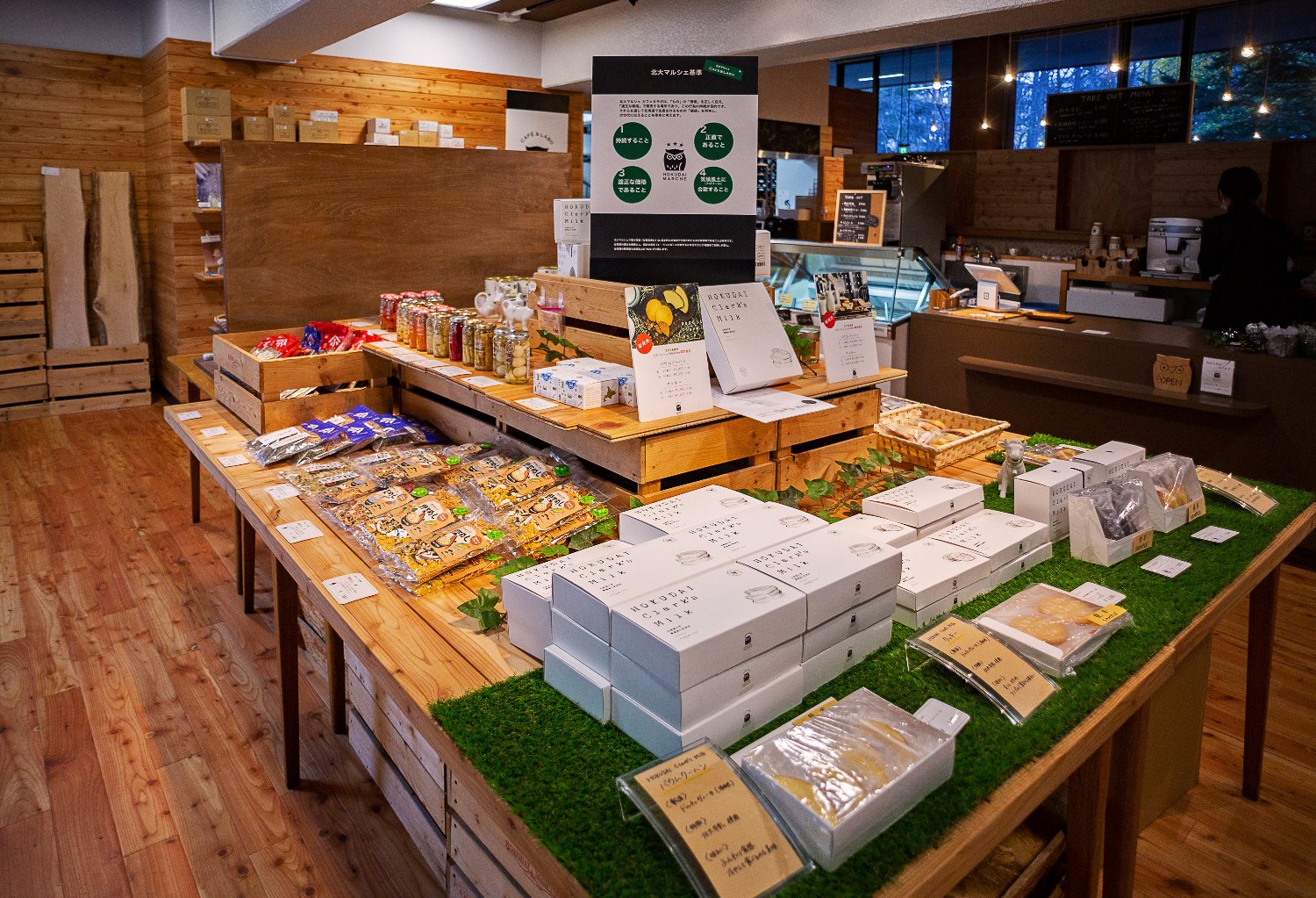 Offering products from all primary industries, including agriculture, livestock, fisheries, and forestry.

The products on the shelves are selected based on the Hokkaido University Marché standards of sustainability, honesty, fair price, and suitability for the climate.

The development of original Café & Labo products that embody the core concept of the Hokkaido University Marché has also commenced. The raw materials include raw milk from Hokkaido University's dairy cows, which is the very essence of the Terroir that can only be created on this land. 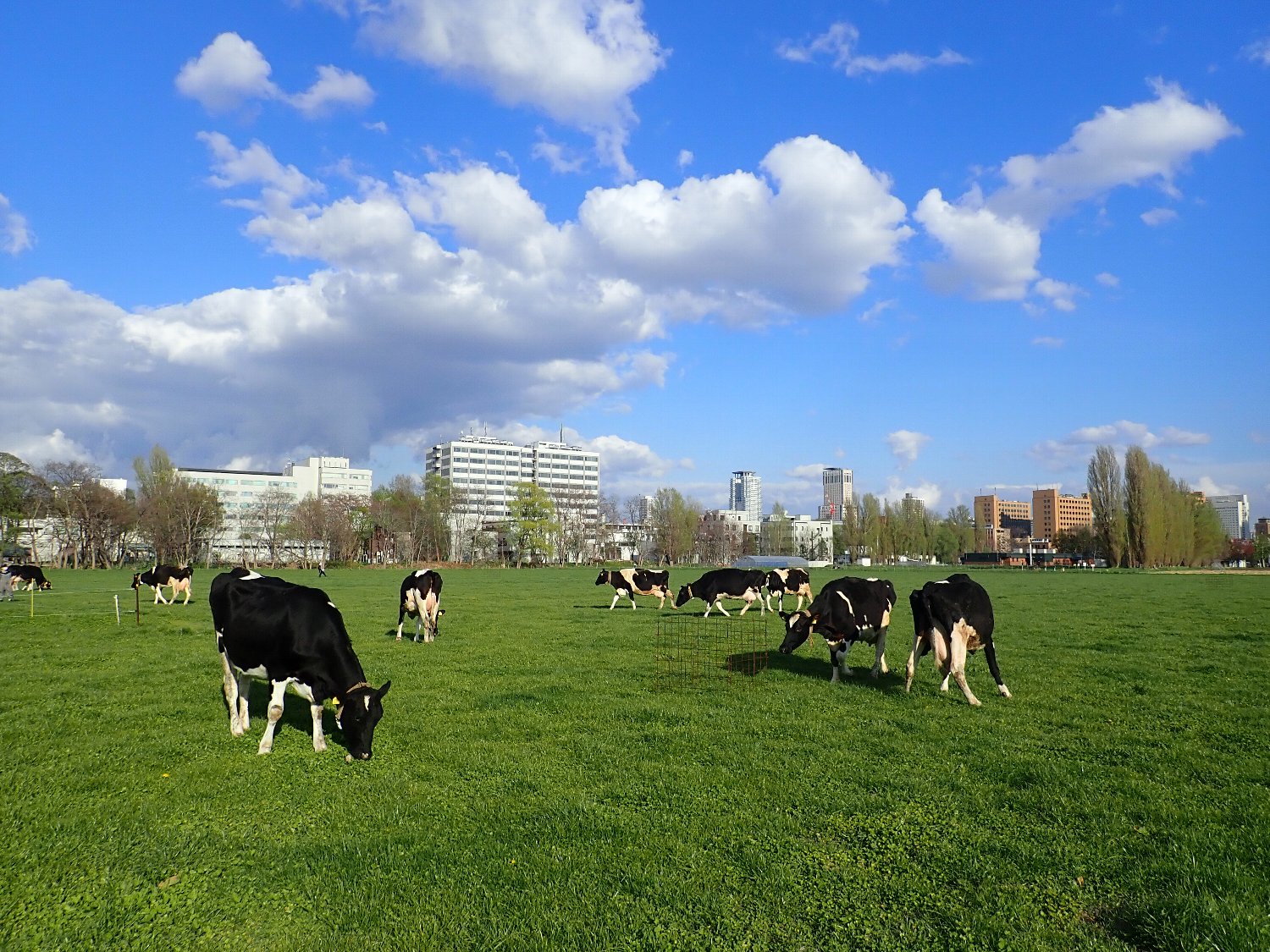 The Hokkaido University Farm was the place where the first Holstein cattle was introduced to Japan in 1889. (Photo courtesy of Mitani Tomohiro)

Café & Labo is managed by Hokkaido Rural Research Institute. It is headed by Daikoku, Hiroshi a dairy farmer from the town of Okoppe. He has been a close observer of the two from the start of the Hokkaido University Marché to the present, and provides full-scale support for their activities.

Daikoku laughs and says, "I think most people involved in education and research tend to focus on the urban areas, and few people visit the production sites. It is difficult to think about agriculture not only as a single entity but also as something that is connected to the local community. The efforts of the Hokkaido University Marché could be a challenge that goes against the mass production and efficiency of society. It's great to have the opportunity to take on that challenge." 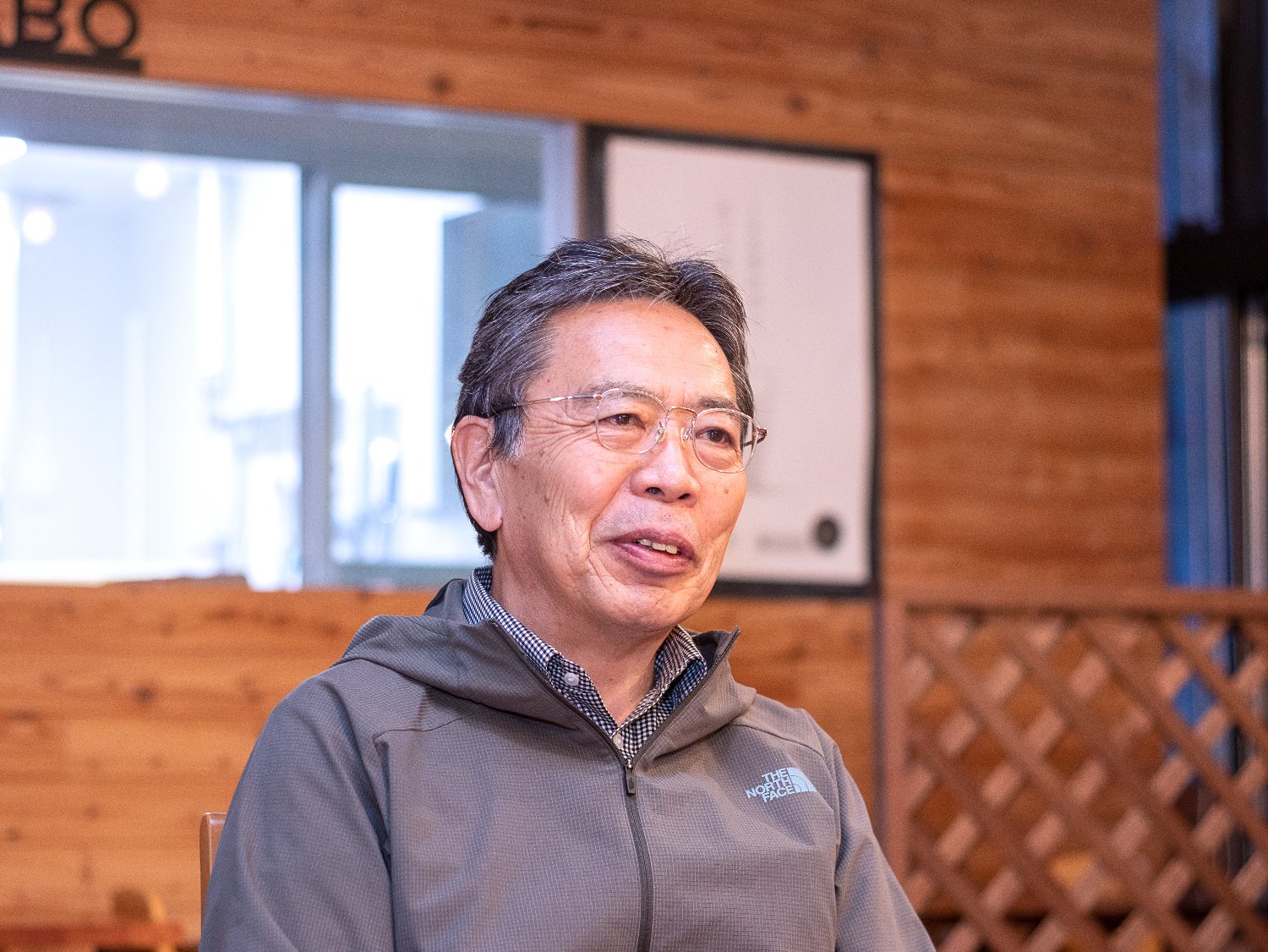 Miyawaki Takafumi and Yoshida Saki, both graduates of the Graduate School of Education at Hokkaido University, are leading the way. Miyawaki says, "I sensed the potential of the concept of producing and selling products made from milk produced from local pastures, at Hokkaido University in the center of Sapporo, so I change my job and now I am in charge of store management and dairy product processing.” When she was a graduate student, Yoshida was active as a member of the Hokkaido University Marché organizing committee, and after graduation she got a job here. She recalls, "When I participated in the Marché as a member of the committee, I learned the importance of providing a place that connects production and consumption, and of being able to see the story of the food." 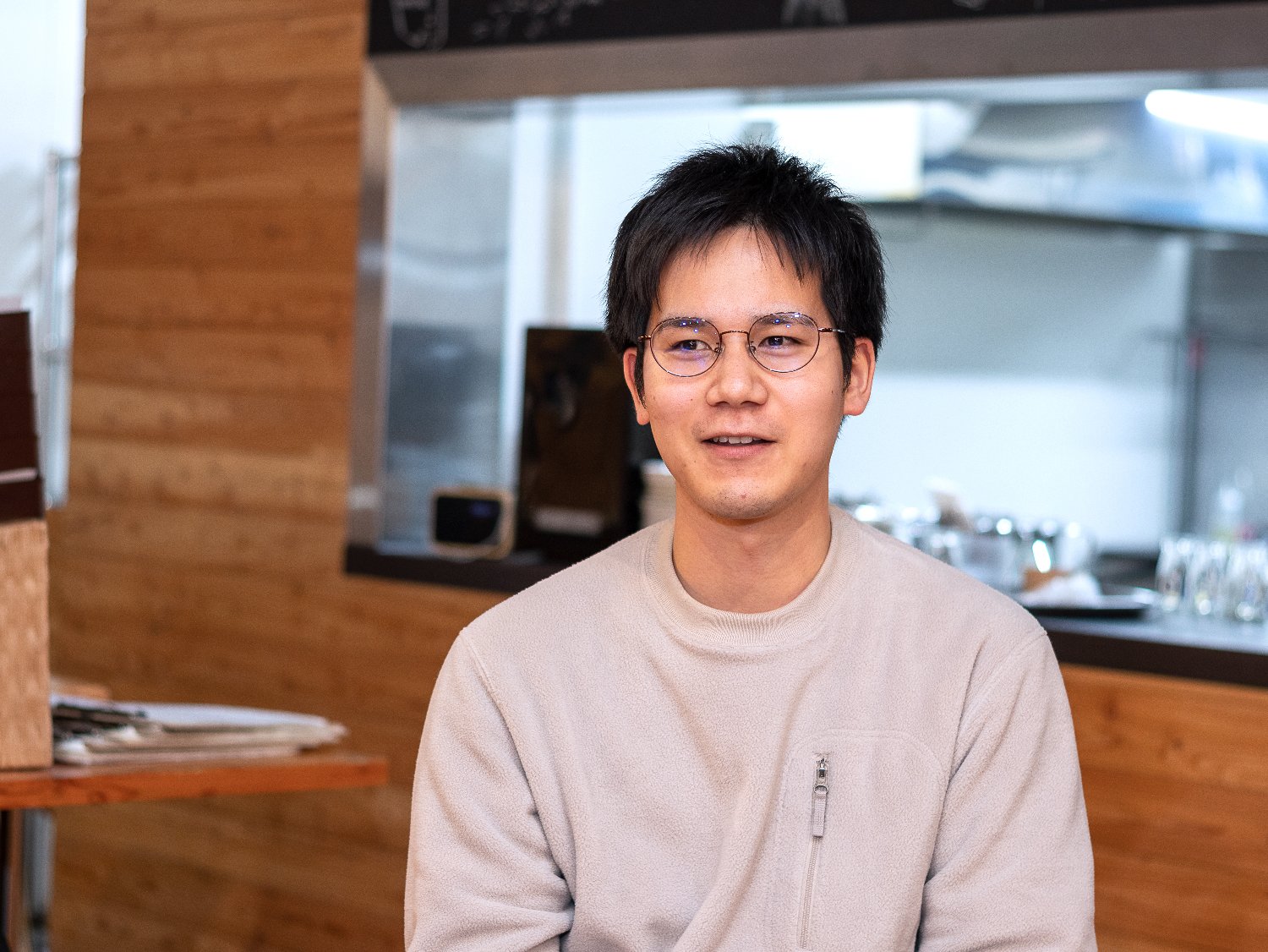 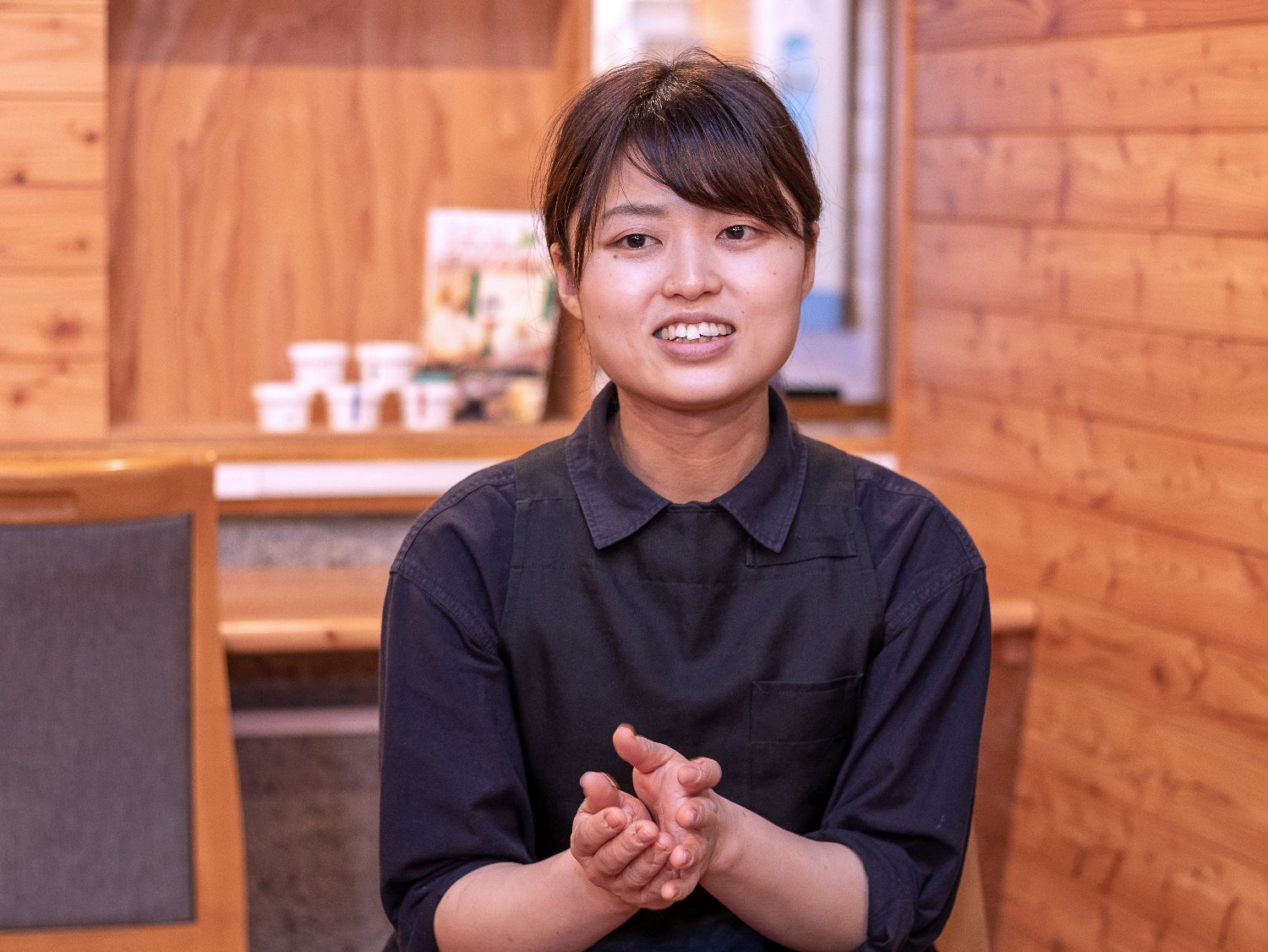 Hokudai Marché expands its reach into the neighborhood

In 2021, the Hokkaido University Marché took another step forward by adding an awards event. The aim of these awards is to provide a platform for farmers to share their thoughts and ideas about their daily management and local activities, and to spread them all over the world.
The awards have three categories (agriculture category, rural area category, and food category) that represent the concept of Terroir. Although there is no prize money, the winners can use the Café & Labo and receive support from the students in sharing information. 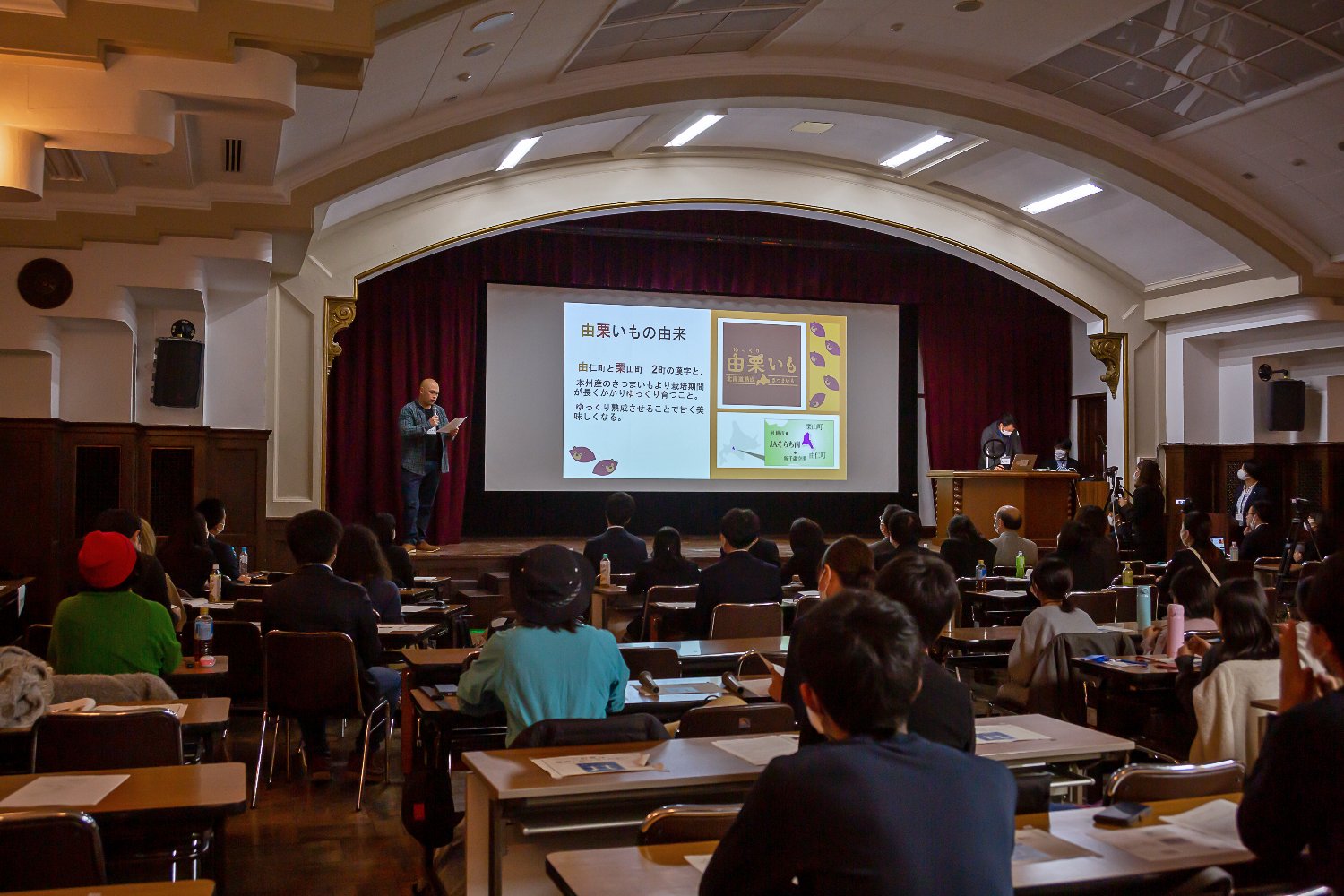 The theme of the first award was "Thinking about the future in 20 years based on issues in Hokkaido agriculture," and the Sorachi Minami Sweet Potato Club was selected as the grand prize winner from among three categories.

Kobayashi says, "We have not been able to fully identify the people who are responsible for Hokkaido's food and primary industry. I would like to highlight people who are diligently working on their crops, as well as people and initiatives who are continuing production in their communities using their outstanding skills and knowledge." 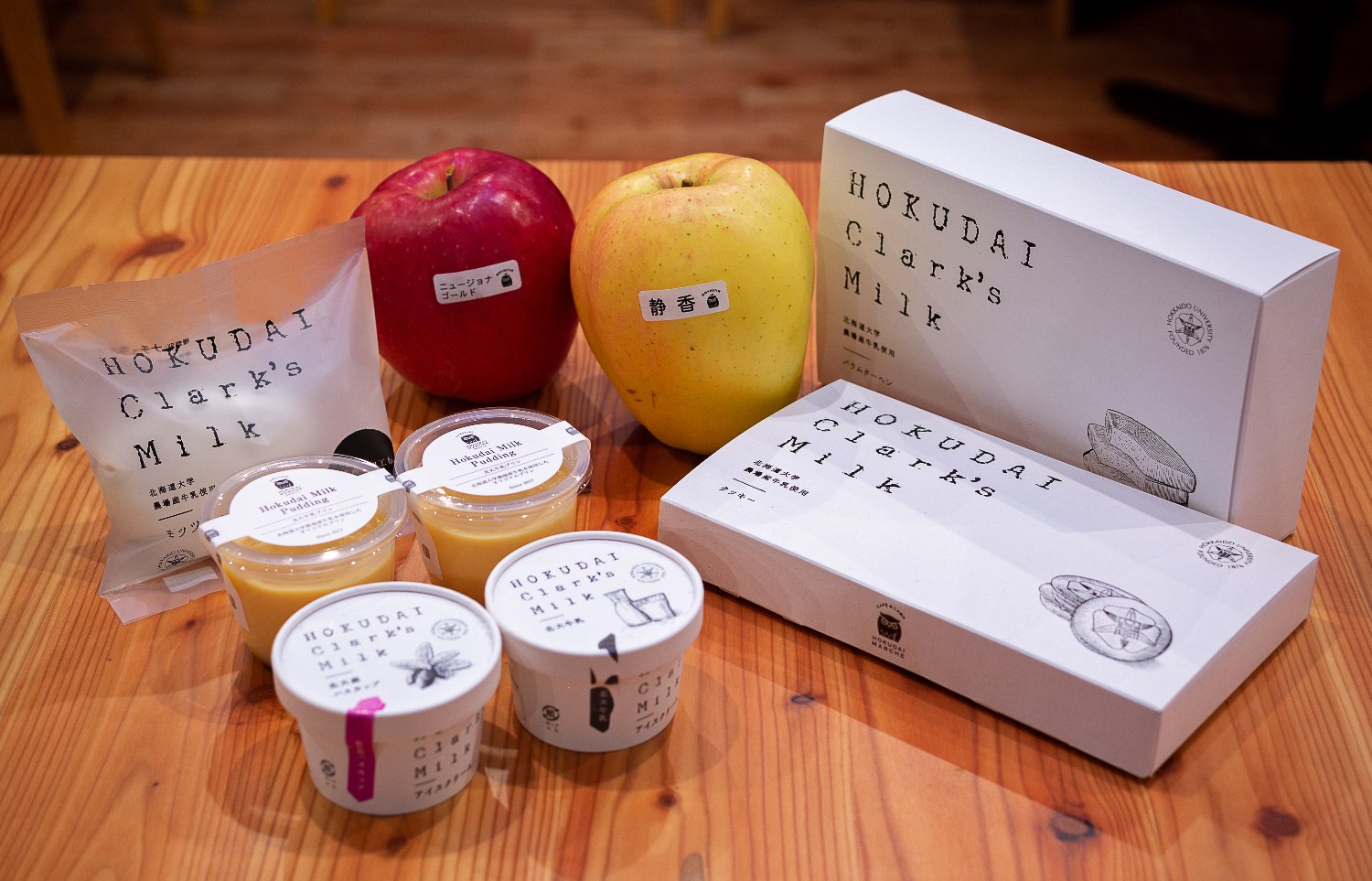 In addition to being a place for consumers to connect with production sites, Café & Labo is increasingly being seen as an opportunity for part-time workers and other students to establish contact with food and primary industries. 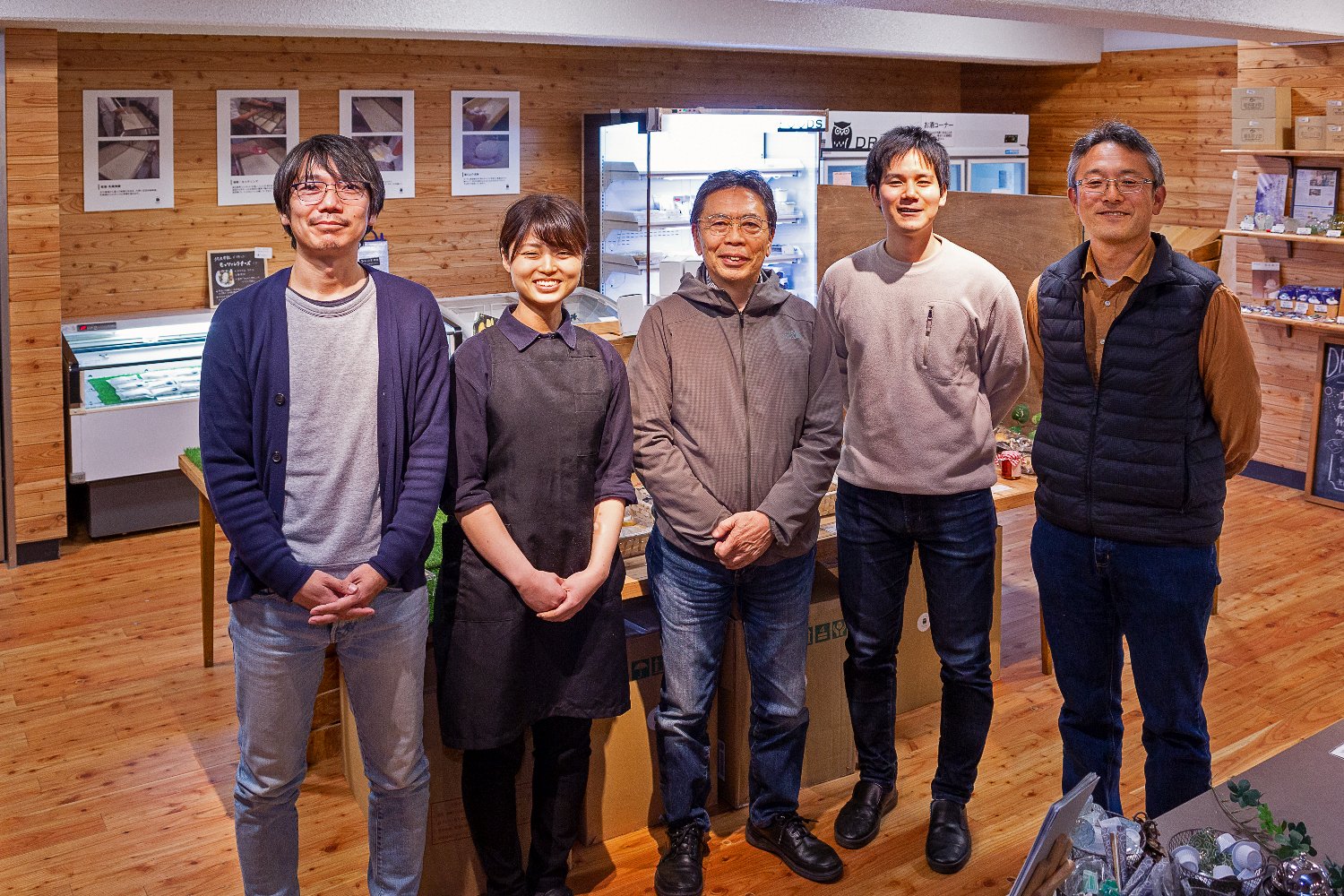 Café & Labo, an opportunity for people to develop an interest in food and primary industries

Production and consumption, urban and rural areas, agricultural education and production sites. It may be difficult to overcome these gaps all at once. However, it is possible for each of these areas to come together and create a favorable path toward the future. The Hokkaido University Marché will continue to evolve as a bridge between these areas.