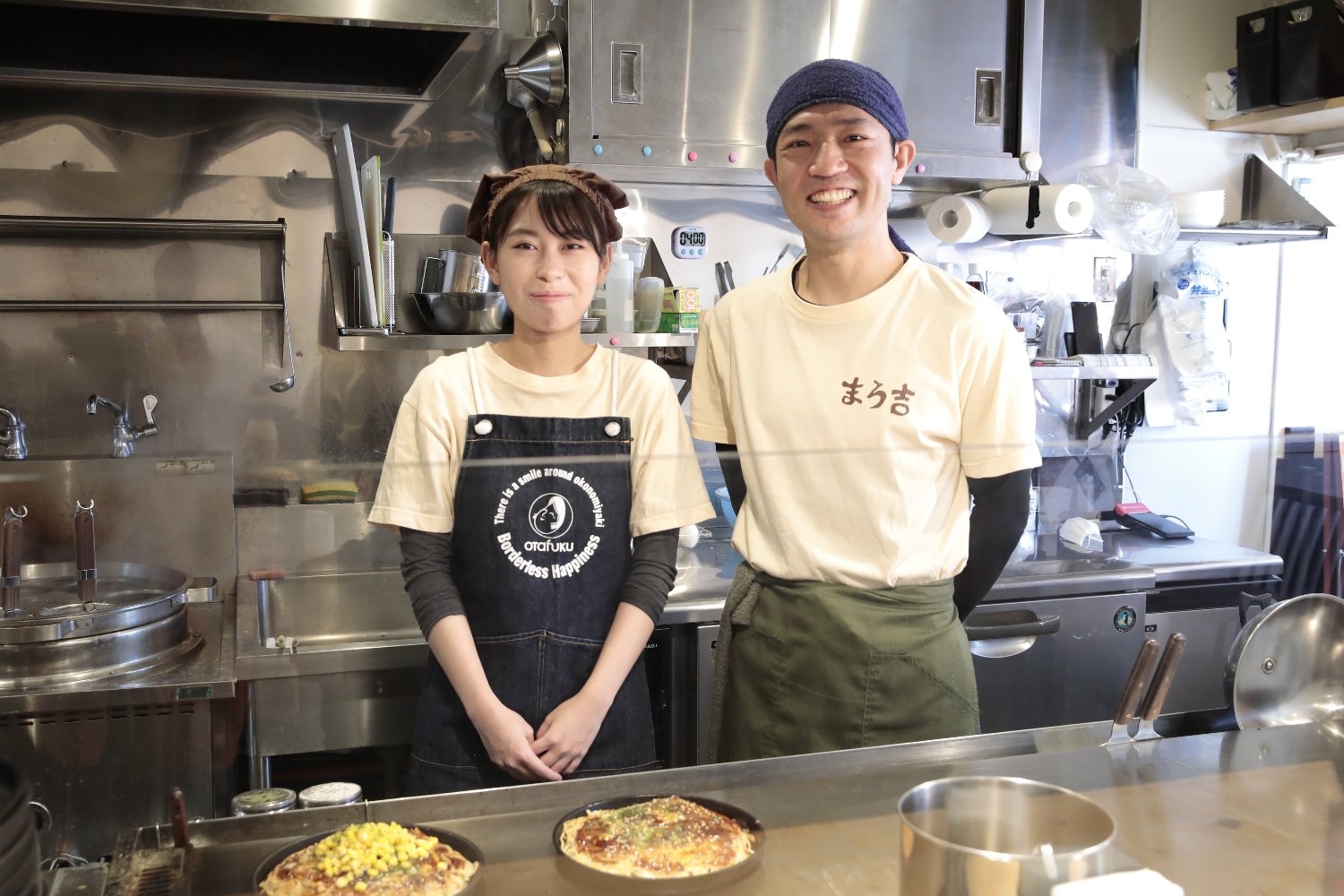 There is an okonomiyaki restaurant on the corner where Hokudai Dori and Kanjo Dori intersect. Why did this former high school teacher, who was born in Hiroshima Prefecture and graduated from Hokkaido University, choose to serve the taste of his hometown right in front of his alma mater?
Words by Murakami Saki
Photographs by Ito Rumiko
Translation by Xene Inc.

Always at his best

The teppanyaki iron griddle crackles right before your eyes and the appetizing aroma tantalizes your sense of smell.
There are not many restaurants in Hokkaido that serve Hiroshima okonomiyaki, and even fewer that specialize in it.

Hiroki Morimoto is the owner of the Hiroshima-style okonomiyaki restaurant Marokichi.
Born in Hiroshima City of Hiroshima Prefecture, he moved to Sapporo when he entered Hokkaido University. His father had influenced him to ski, and his ski team won the first place in the national competition and won the overall title three times in a row. He was truly gifted intellectually and physically. After graduation, he took a teaching position at Hiragishi High School in Sapporo.

He wanted to be the best English teacher in Japan, so he put a lot of effort into his lessons and his relationship with his students.

Determined to improve his own English skills, Morimoto left Japan and chose to major in TESOL (Teaching English to Speakers of Other Languages) at a graduate school in California. He continued his studies at his own expense for two and a half years. The results of his efforts were evident at Hiragishi High School when he returned to Japan.

His search for ways to make learning fun and to help students feel comfortable studying English is similar to that of his father, who was also an English teacher. After seeing his father at work from a young age, he became inspired possibly leading him to follow in his father's footsteps as a teacher.

And then five years later, he made a major change.

“Every day was fulfilling. That's why I decided to move on at that time. I thought that was the right time to make a break. I decided to stop following in my father's footsteps and do what I love, which is work involving travel."

He ended his eleven years of teaching with a new dream.

Connection brought about by strong feelings

His hobby is traveling, and his dream is to travel around the world. Somewhere along the line, Morimoto began to realize that he wanted to create his own unique guesthouse that would attract travelers from all over the globe.
As soon as he returned to his hometown, Hiroshima, he began training at a famous okonomiyaki restaurant. In a short period of time, he improved his skills under a demanding regime where he sometimes cooked hundreds of okonomiyaki in a day.

After completing his training, he returned to Hokkaido with his family at the end of May in 2020.
With the birth of their child, they decided to give up on opening a guesthouse for a while. However, he still wanted to make it easier for people to enjoy authentic Hiroshima okonomiyaki, so he once again made up his mind to open a specialty okonomiyaki restaurant.
He chose Sapporo, which is his second home, as the place to make a fresh start. 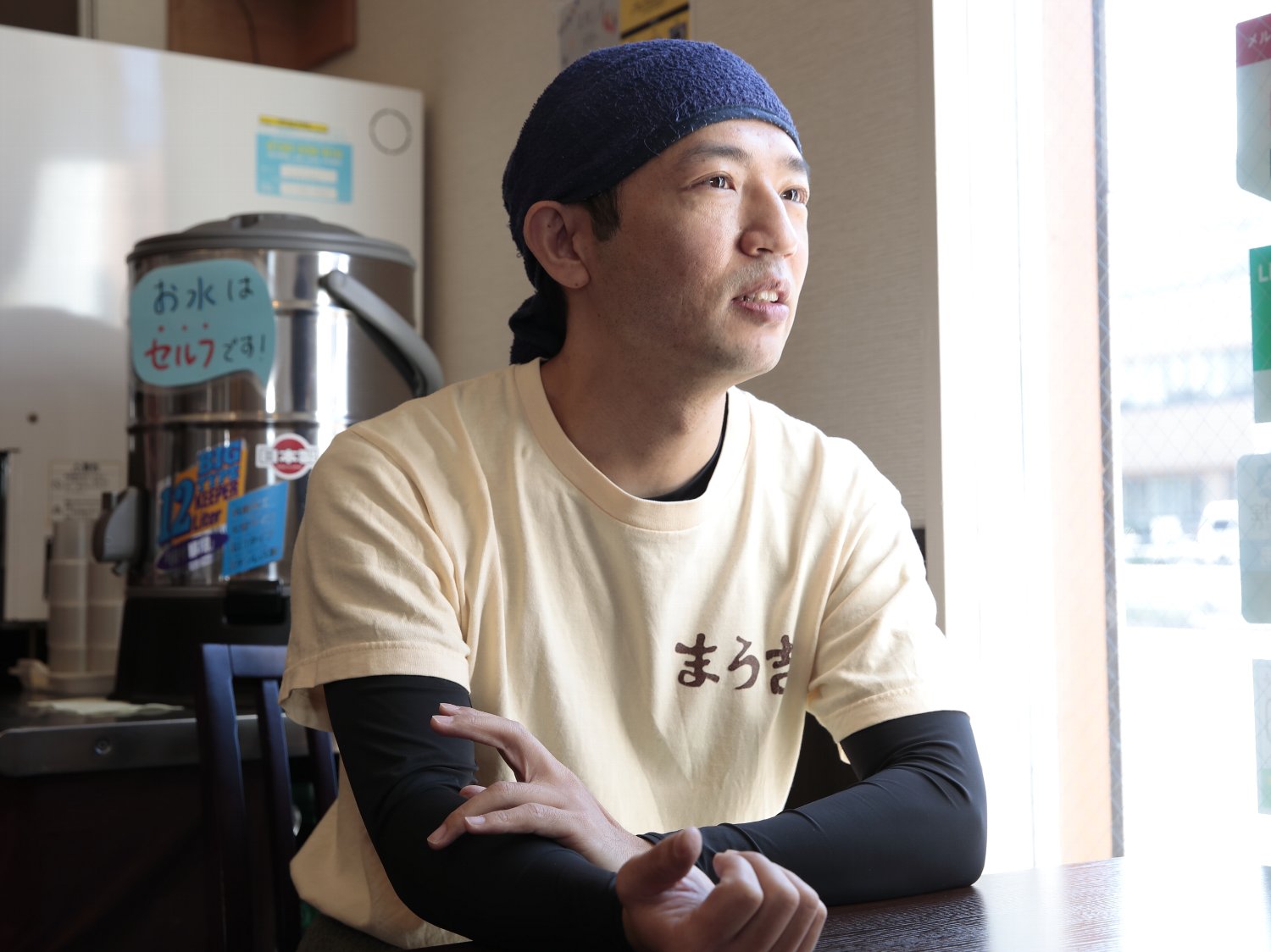 Morimoto says, "My dream is to have a guesthouse with a teppanyaki iron griddle. I am preparing to make this dream come true."

After several months of searching for a location, he was referred to a store right in front of his former school, Hokkaido University. 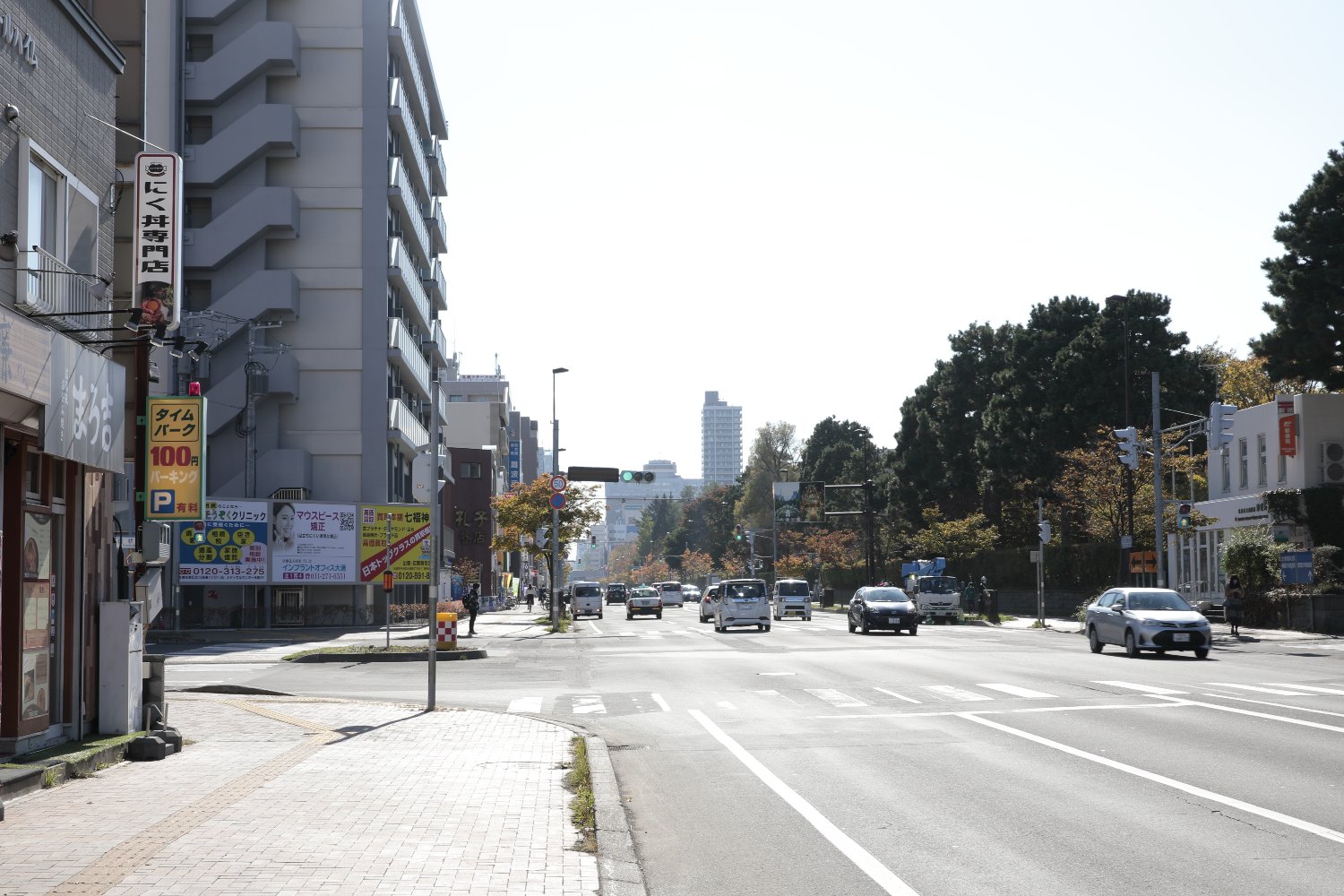 Hokudai Dori runs north-south in front of the restaurant. 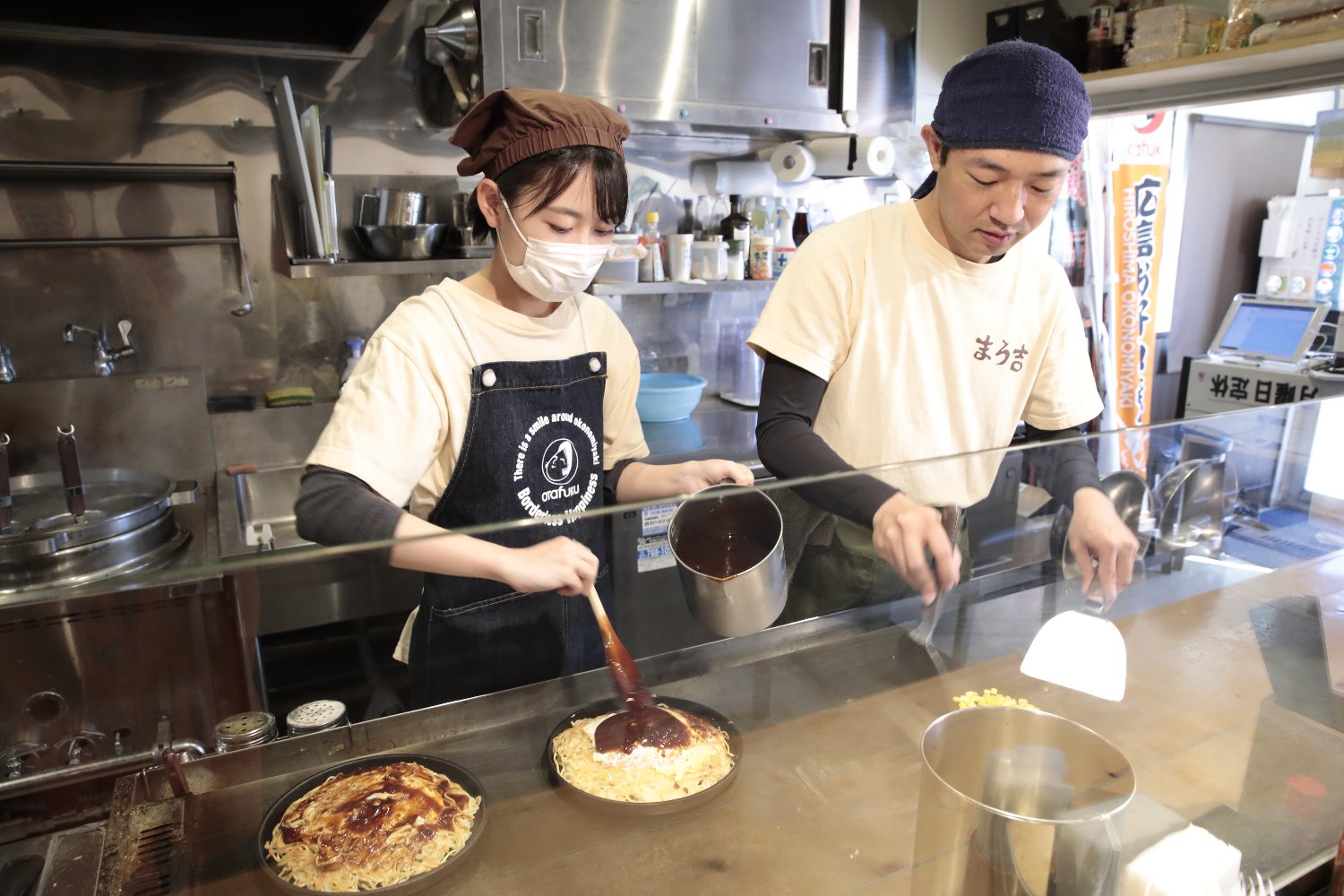 Running the restaurant as a couple

“I want Hiroshima's okonomiyaki to be a part of Japan's dining options. I feel that this is something that only I can do," he said with passion. For Morimoto, this is a great place where a wide variety of students, faculty, and tourists from Japan and abroad can come and go. On September 16 of the same year, Hiroshima-style Okonomiyaki Marokichi opened its doors.

Creating a place to make connections

His former students gather here like having a class reunion, former colleagues drop in, and friends from his ski team and study abroad experiences come to visit. There are regulars who love the great taste of the food, students who come with their families to tell us that they have passed their exams, and people who stop by to take a break on their way to the Hokkaido University Hospital. There are also people from Hiroshima who drop by to enjoy the great taste of their hometown cuisine and feel at ease.
Morimoto says that he is really happy to be able to create such a place. 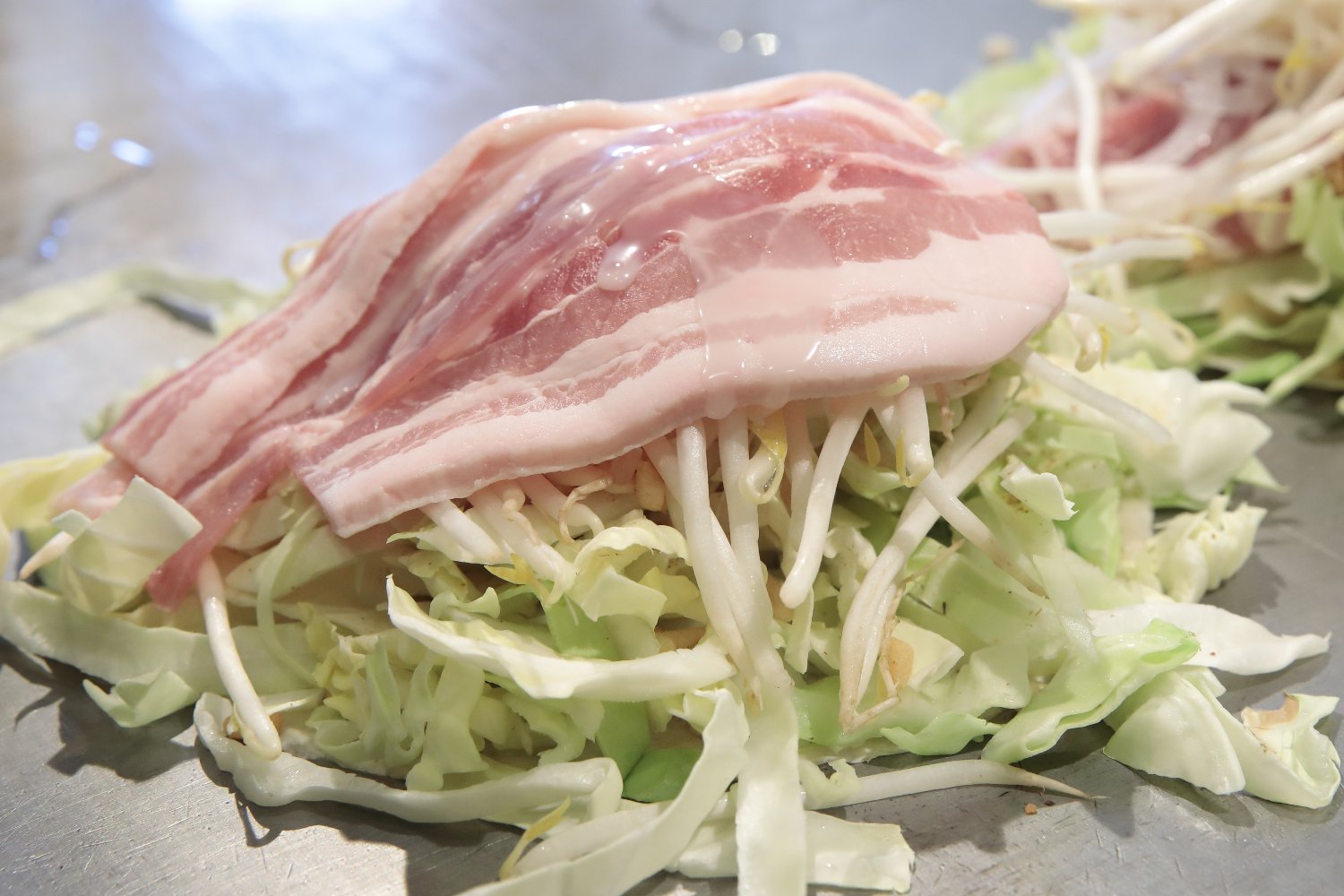 The cabbage is thick to bring out its sweetness and to maximize its texture. 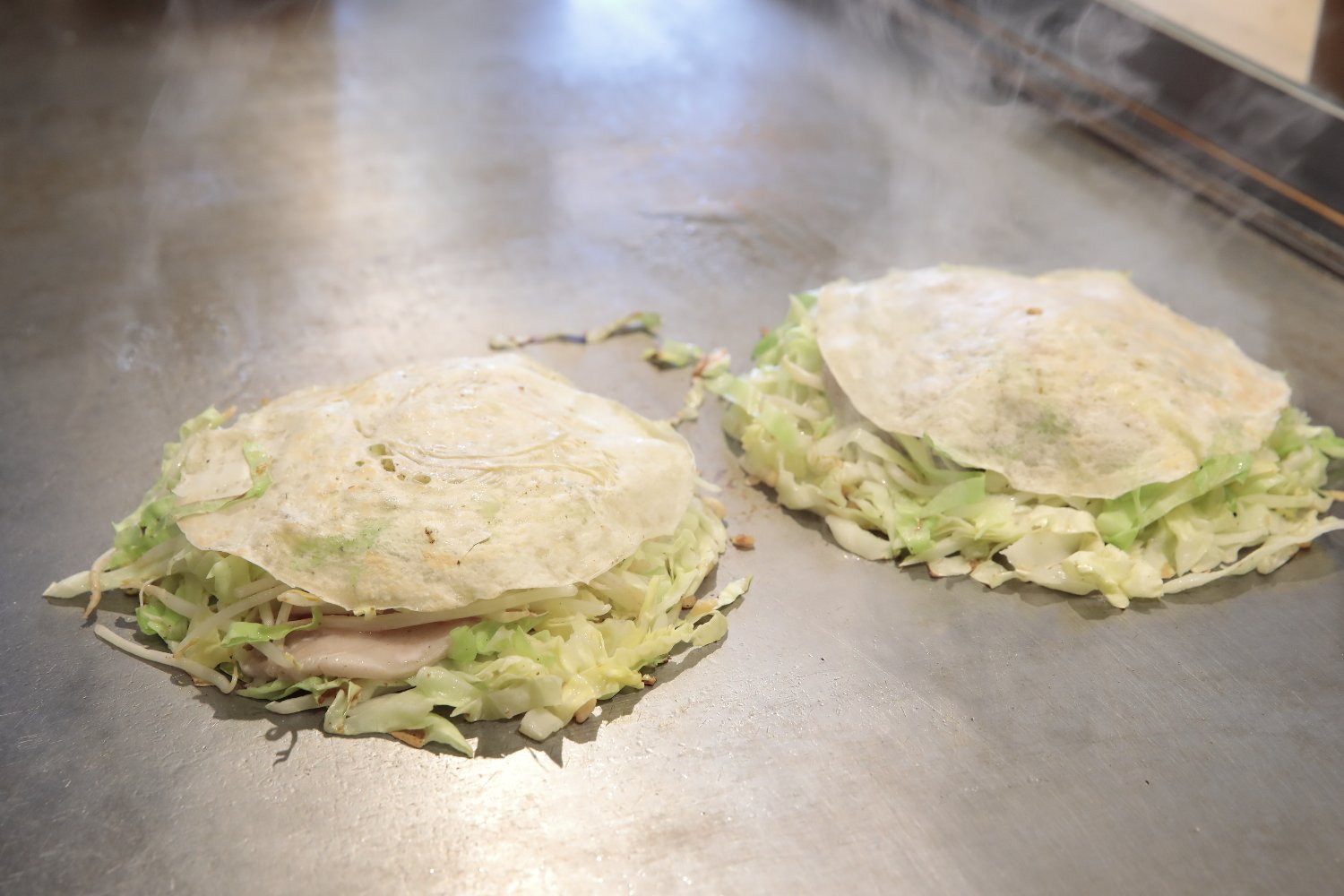 As it steams, the sweet aroma of cabbage floats in the air together with the steam. 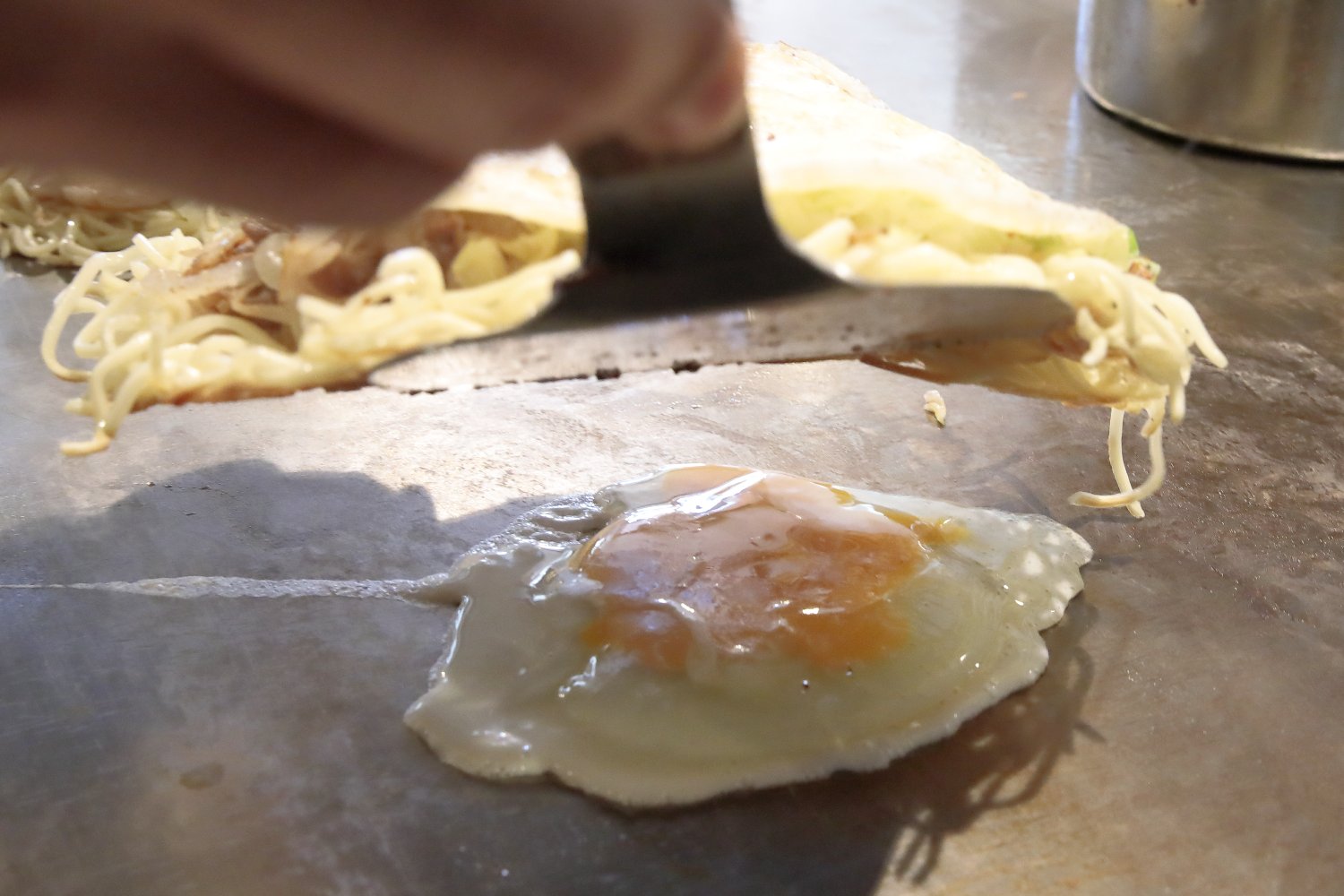 The final layer is the egg. It's topped with sauce and green laver to put the finishing touches on it. 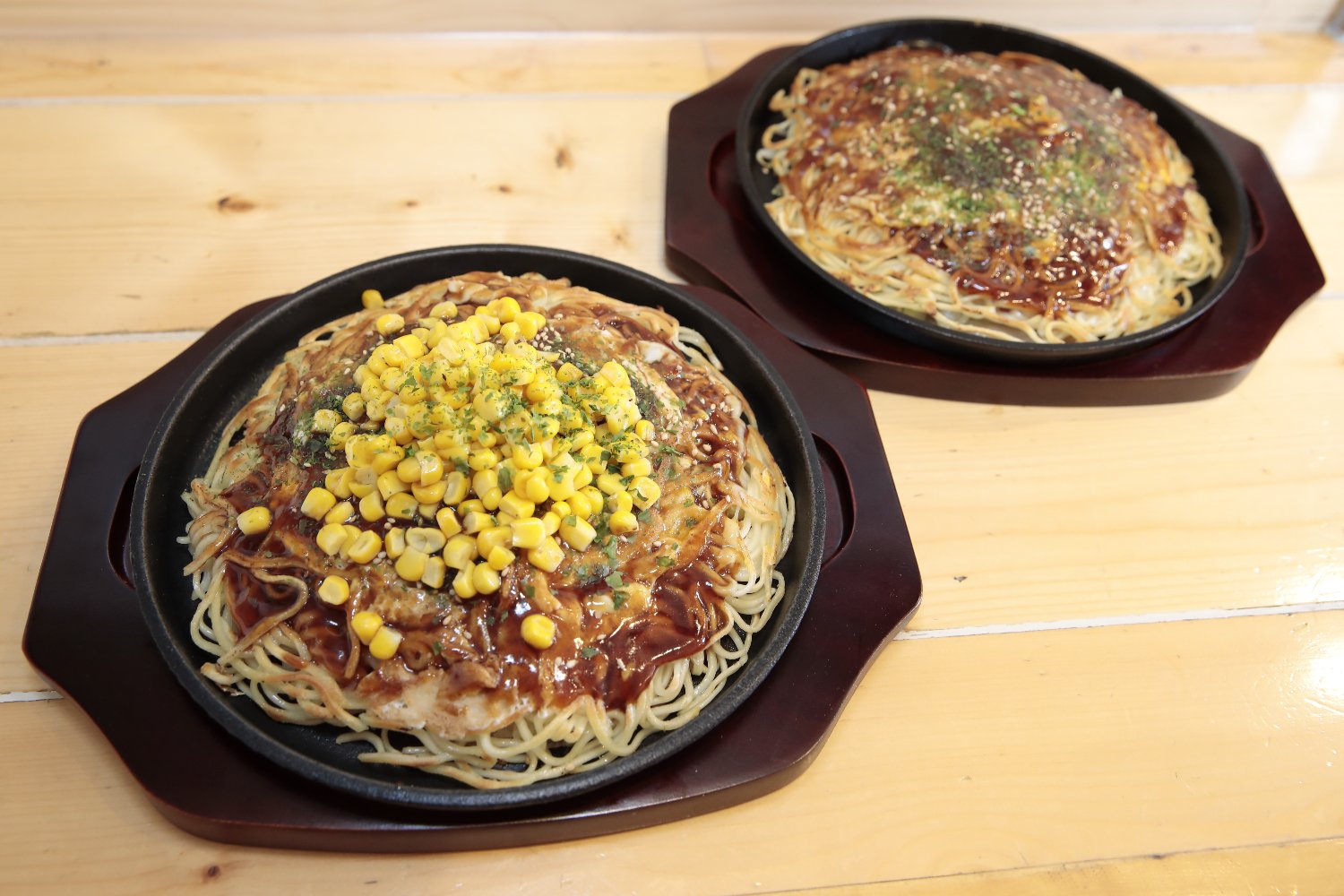 This is the classic Meat & Egg Soba (pictured in back) that you should try first. The fragrant noodles, sweetly steamed cabbage, and sweetness of the pork fat come together great with the great aroma of the sauce. The restaurant's original Dosankoyaki (pictured in front) is a collaboration of Hiroshima and Hokkaido soul food. 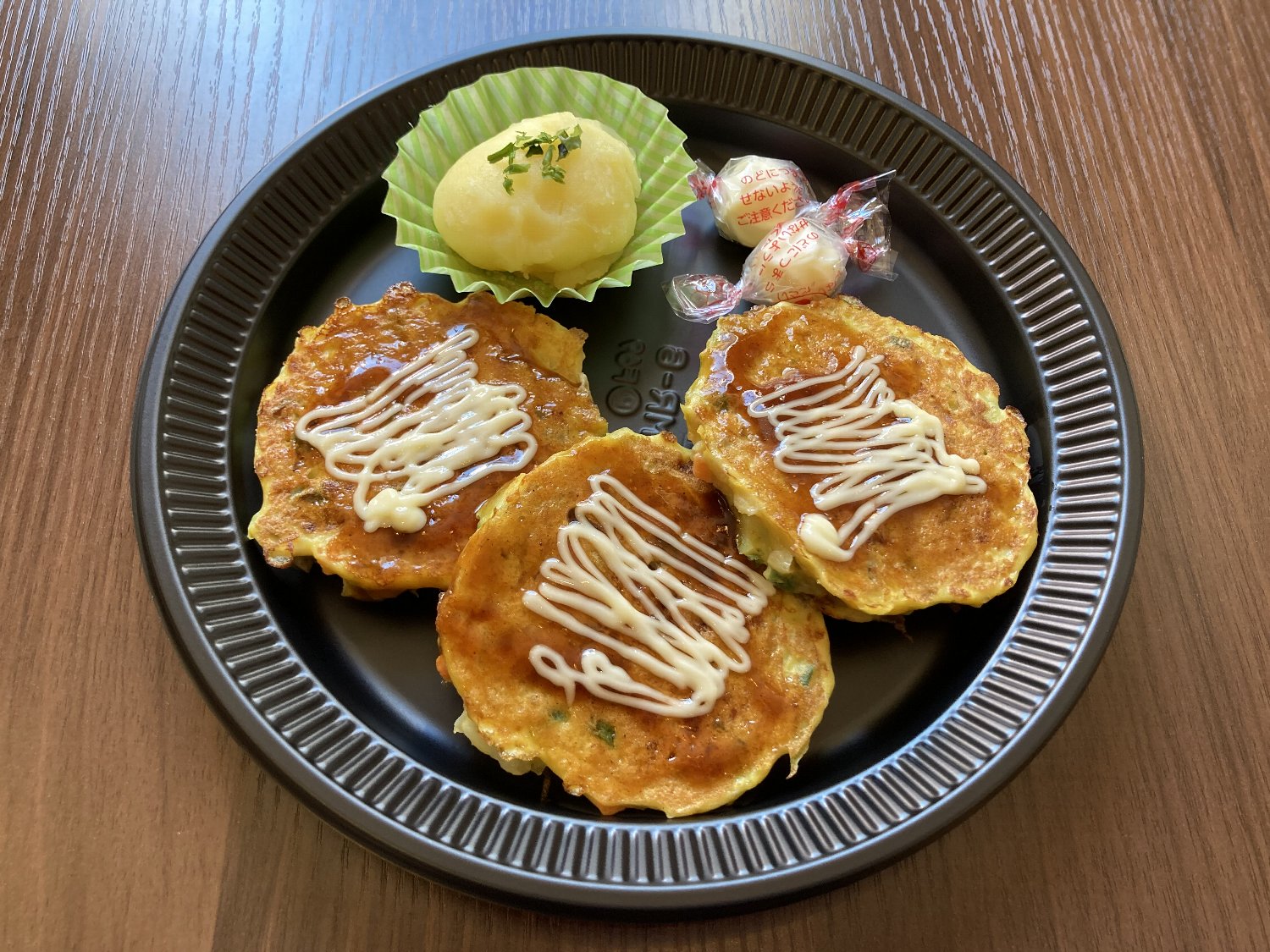 Okonomiyaki for 1-year olds was an idea devised by his wife, Shiori. A new menu item that babies can enjoy once they are able to eat solid food.

Starting a restaurant is not something you can do overnight. The journey must not have been an easy one. However, they have been able to forge relationships on their own.
That's why people come to Marokichi.

Twenty years ago, he chose Hokkaido University for his higher education, which was the first step leading to the present.
Right next to the place where it all began, Morimoto will continue to make personal connections over the teppanyaki iron griddle. 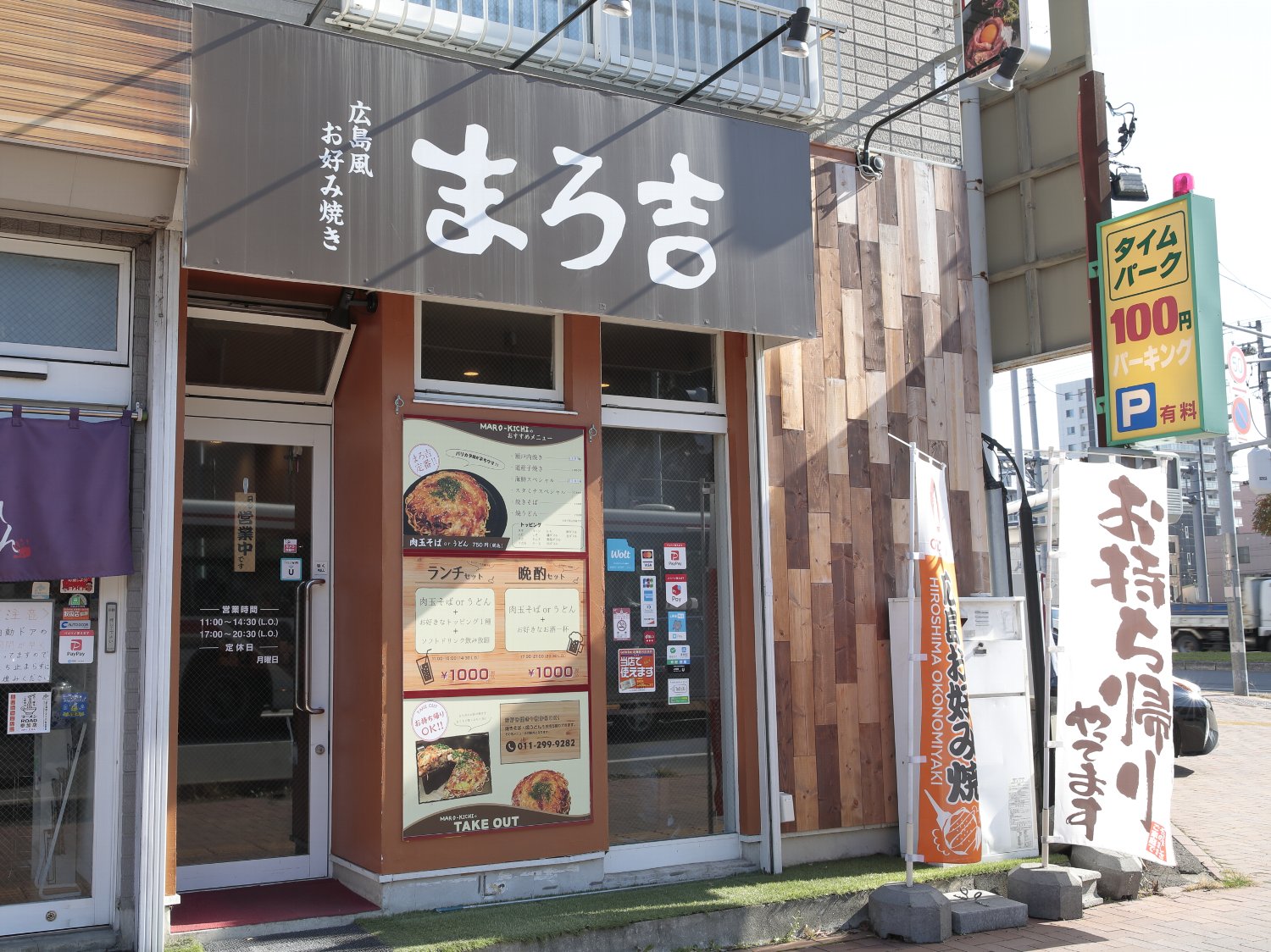