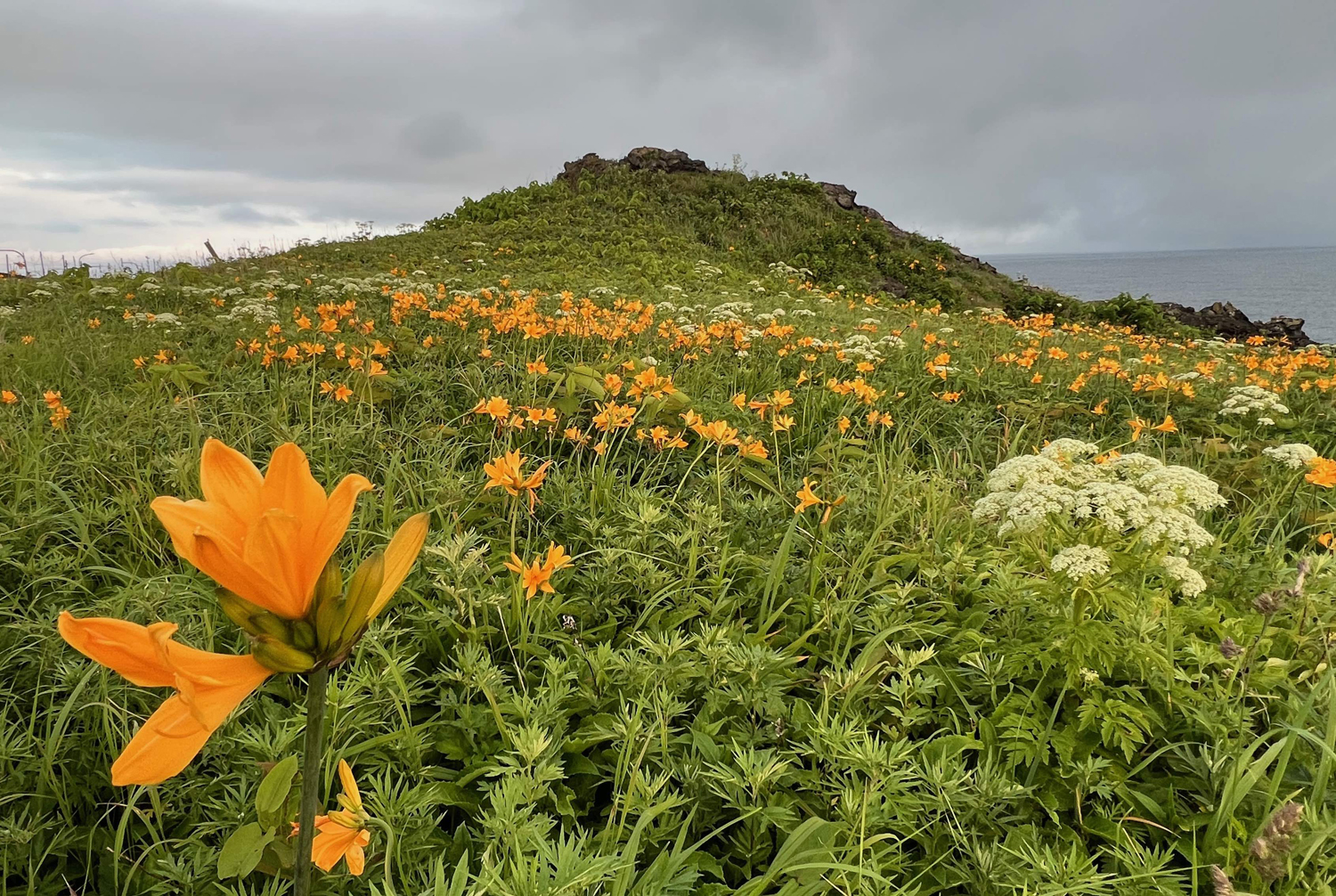 Around the time of the festival at Nagahama Shrine, Rishiri Island is right in the midst of the ezo-kanzo season (Photo by Taniguchi Masaharu)

The story of the revival of the Rishiri kirin shishi lion is also connected to depicting the thoughts and way of life of the people who came to this island from the mainland.
Words by Taniguchi Masaharu
Translation by Xene Inc.

Those who journeyed from the mainland to Rishiri Island

The people who moved to Senhoshi Nagahama on Rishiri Island around the late 1880s were mainly people who decided to follow in the footsteps of people from their hometowns who had journeyed to Hokkaido and found success in the fishing and commercial industries. The hometown of these people was Inaba, in the eastern part of Tottori Prefecture.
About 25 people from Inaba, bringing the kirin shishi lion to Rishiri Island, arrived there in 1894. Sakaguchi Katsujiro, the leader of the group, had journeyed to Otaru a few years earlier and had made a great deal of money from his work digging wells, so he ventured further to Rishiri with great success. 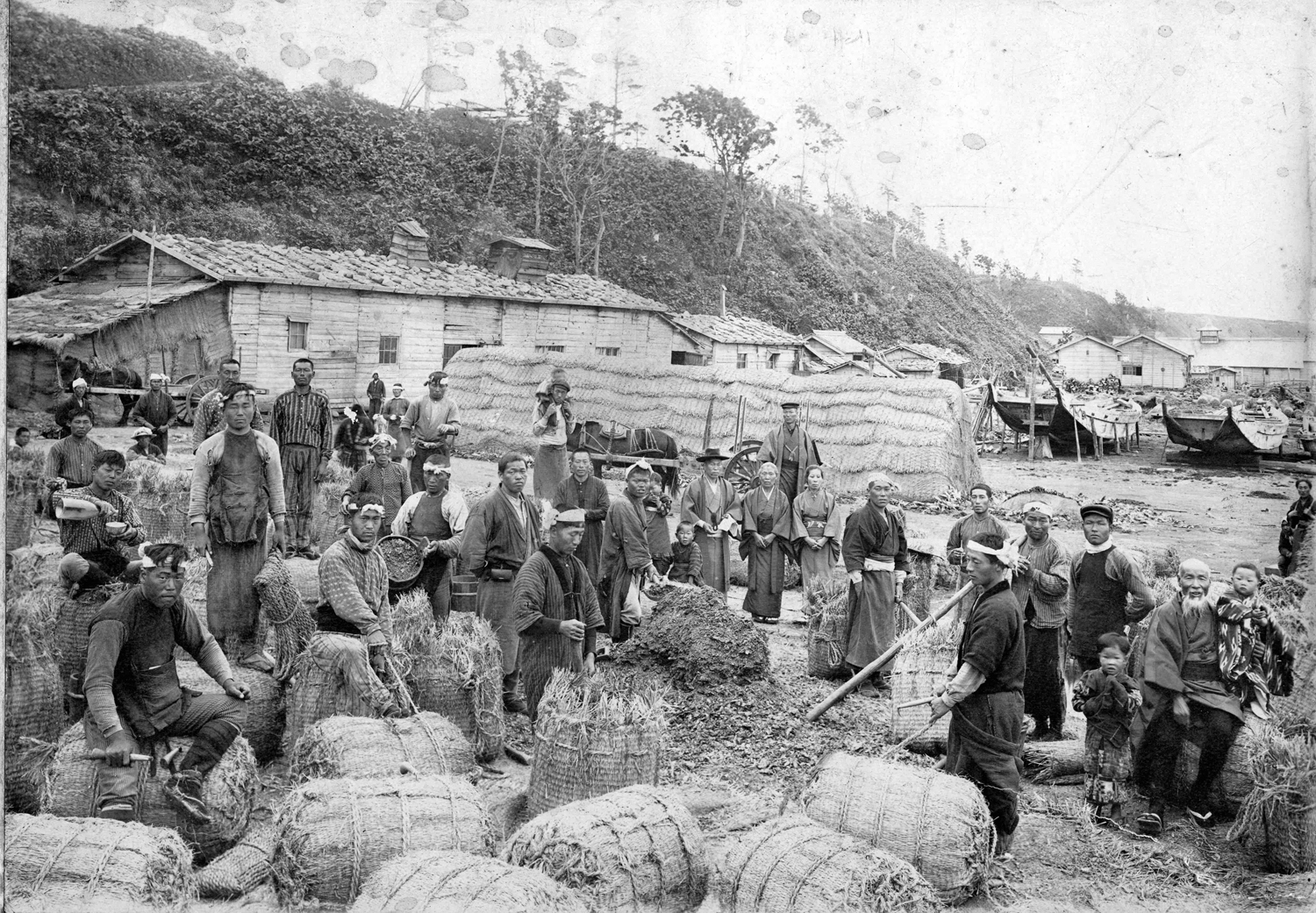 Senhoshi Nagahama in 1912. This photo was taken by people in the area to commemorate a large herring catch (Photo is from the collection of the Rishiri Town Museum)

Initially, the people from Inaba had settled in Oniwaki (currently Oniwaki, Rishirifuji-cho) and Bakkai in Wakkanai on the main island of Hokkaido. They would go to the Senhoshi area to work as migrant laborers. To earn their keep, they had enough work to support themselves in the herring and kelp fisheries. It was not so difficult to earn daily wages. 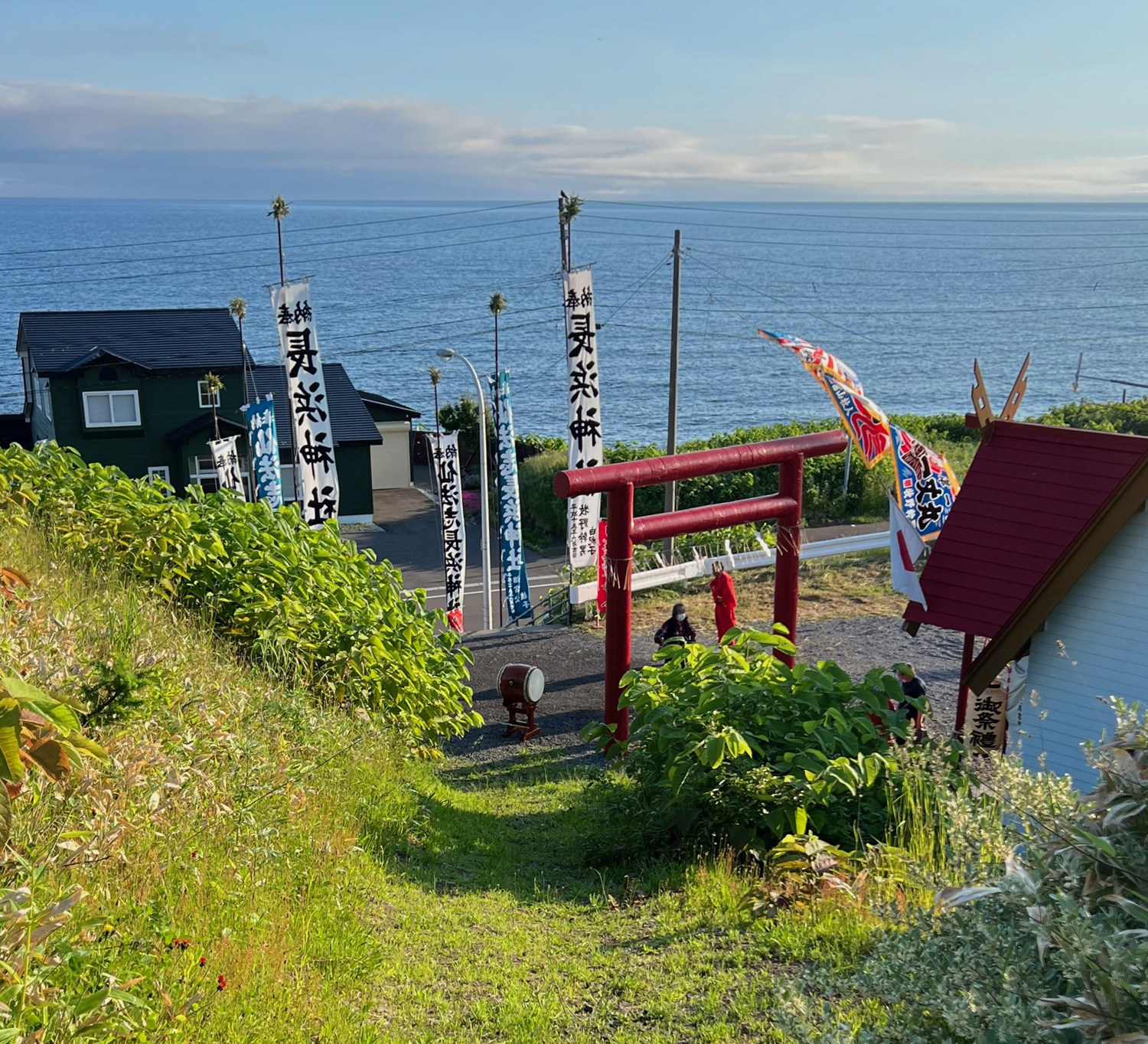 Belief in something beyond human knowledge

Most of the people who journeyed to Rishiri managed to earn a living through physical labor, mainly by fishing for herring in the spring.
Manpower was also needed for a series of tasks such as unloading, cooking, and drying the catch. Procurement of fuelwood, food, boats, and fishing gear was also a major business, and the people who took care of the migrant fishermen's food, clothing, and shelter, as well as those who provided entertainment for them, also enjoyed the bounty of herring.

Meanwhile, the business of dealing with vast nature brings both fortune and misfortune from a world beyond the reach of human knowledge. The herring catch in Rishiri peaked around 1897, and thereafter declined slowly overall, with good catches some years and poor catches others. 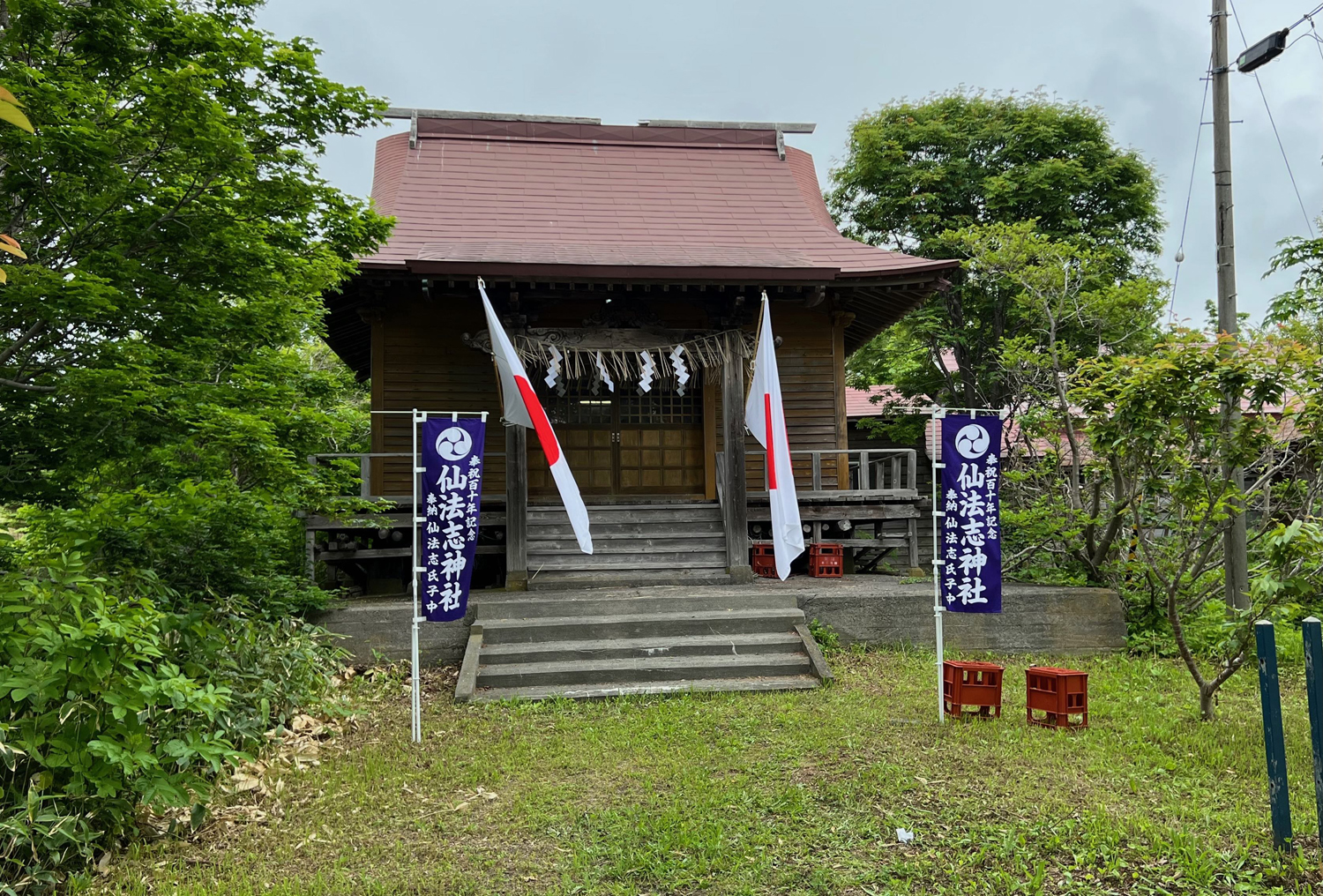 Senhoshi Shrine, which was once positioned as the village shrine of Senhoshi Village (Photo by Taniguchi Masaharu)

Those making a living in herring naturally revered the sea and relied on the gods. For those who live far from home in a different land, their devotion to the gods and Buddha is sincere, far beyond the comprehension of modern people. 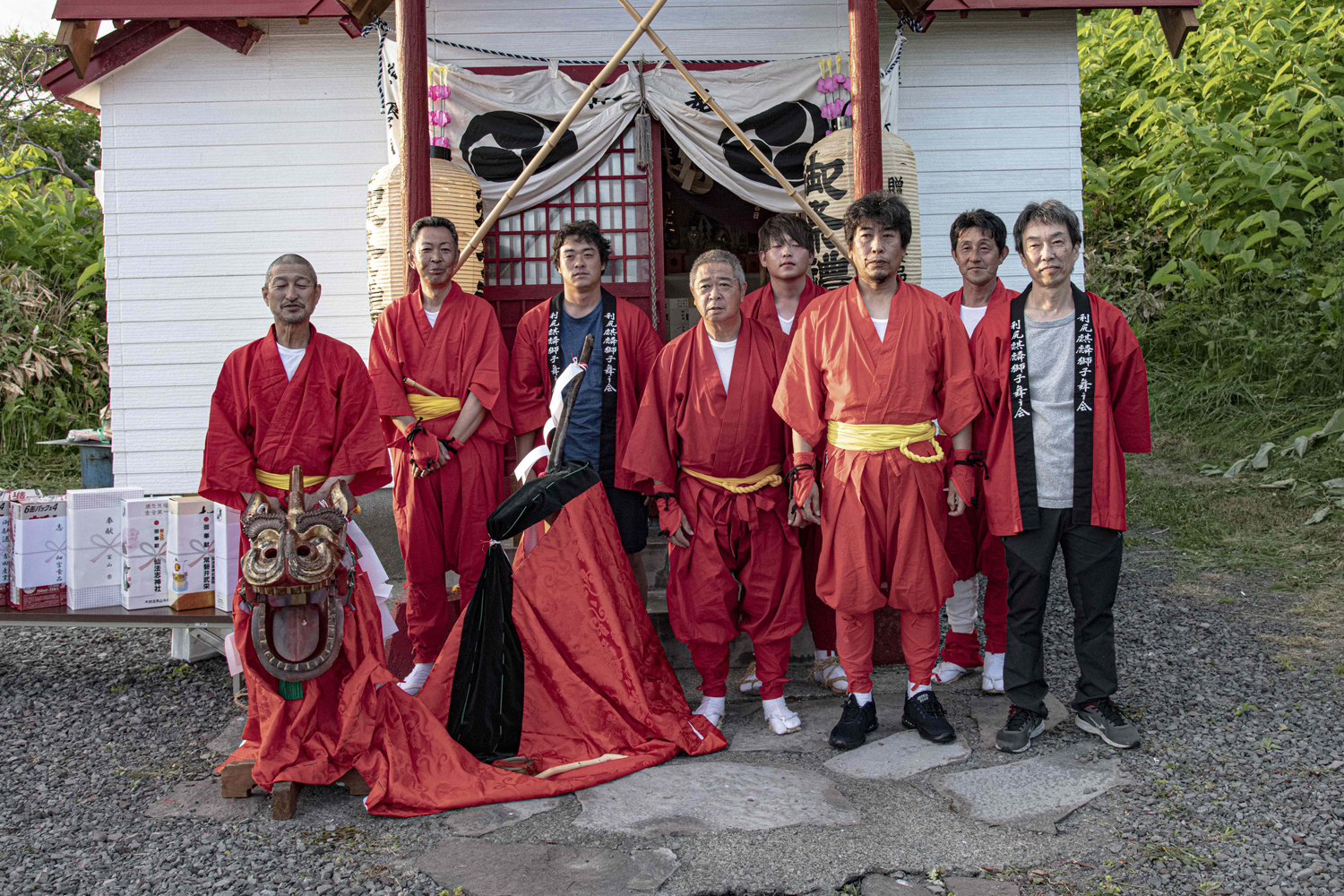 Hatamiya Munetoshi, chairman of the Rishiri Kirin Shishimai Lion Dance Association says, "We hope that the residents of Rishiri and tourists alike will come to see the performance. We want people to become interested in Rishiri's history and the sea through the kirin shishi lion."

The kirin shishi lion, which had been forgotten for nearly 100 years, has made a comeback.
As for the future course of the Association, Hatamiya says that the most important issue is successfully passing down the culture to the next generation.
The Rishiri Kirin Shishimai Lion Dance Association currently has 12 members. There are concerns that there are not enough people in their 20s and 30s who have ties to the Nagahama area and Nagahama. How can younger people be brought into the association? If the dance does not continue, it may not be possible to maintain this established connection with Tottori.

In both individuals and groups of people, if there is a strong will and desire to open themselves freely to the outside, people and towns that want to be involved in that area will have the chance to interact with each other.
Traditional culture and folk performing art can only come to life and acquire new value when today’s people enquire their history and then take root in the future of the region and its people. The Rishiri kirin shishi lion dance suggests the possibility of such a regional approach. 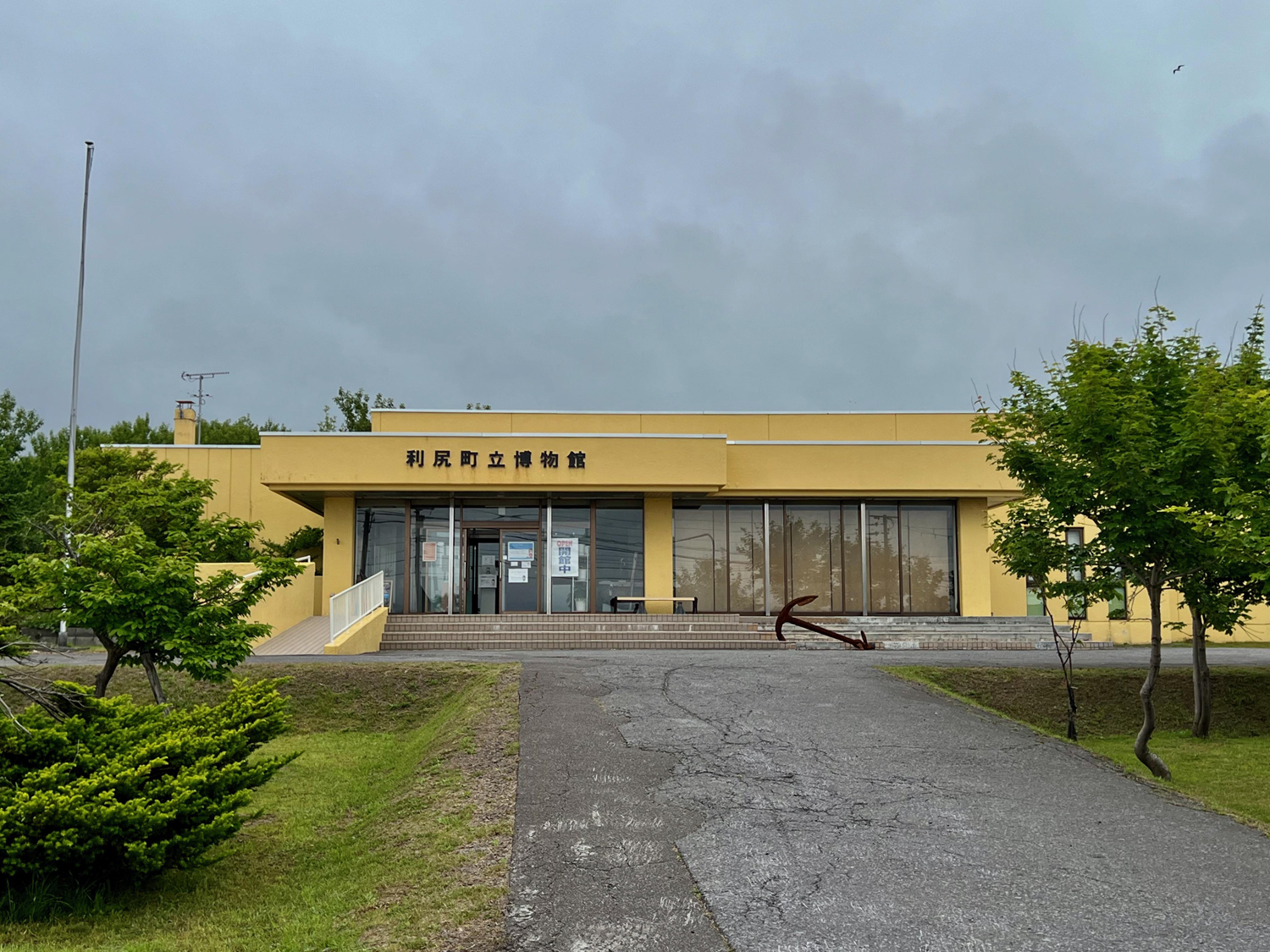