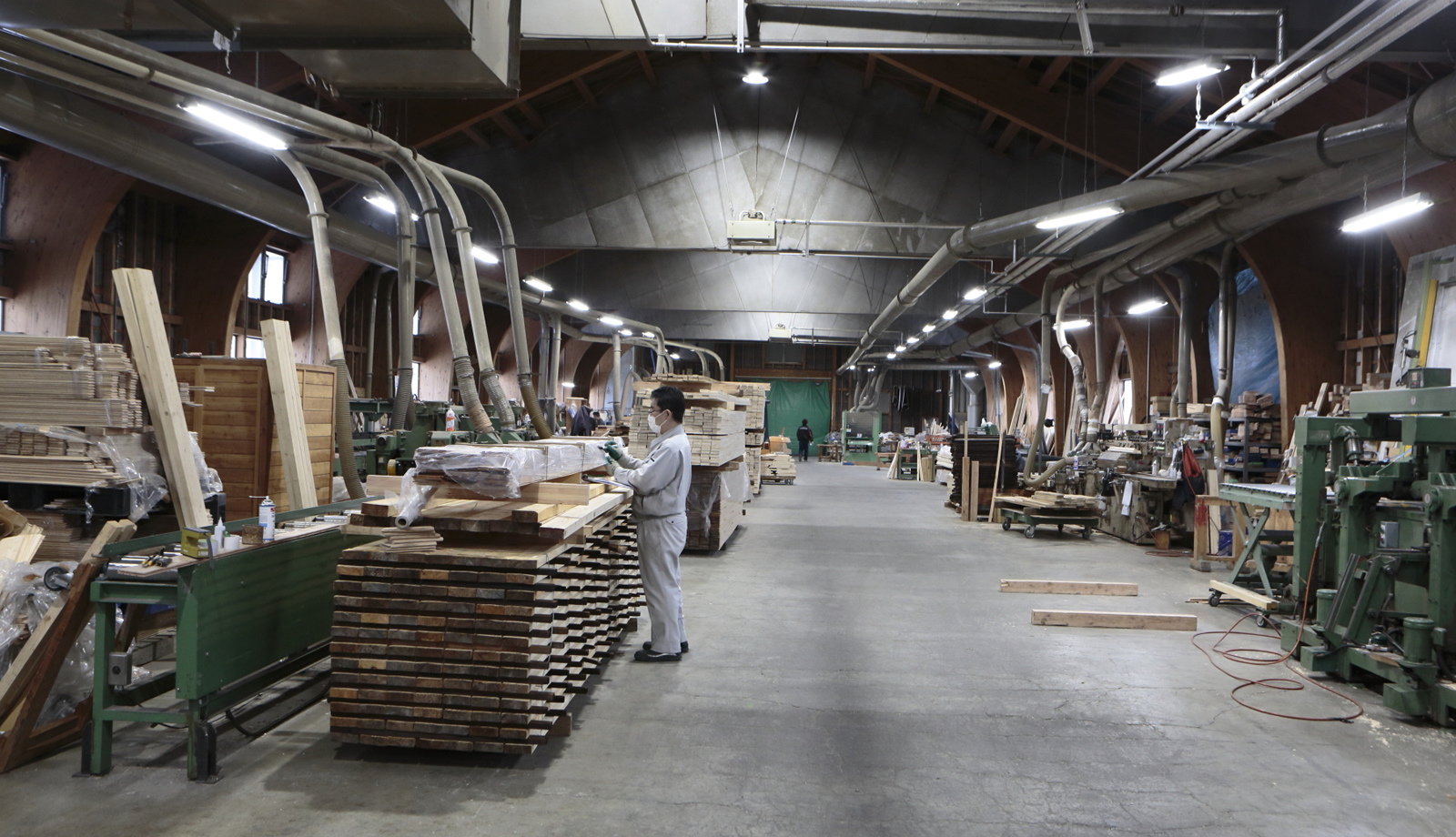 The town of Shimokawa began proactively converting land for commercial foresting when it purchased 1,221 hectares of national forest from the government in 1953. That was the beginning of its recycling type forest management in which it afforests 50 hectares of land every year and deforests them over the course of 60 years.
Words by Ishida Mie
Photographs by Tsuyuguchi Keiji
Translation by Xene Inc.

'Mr. Yamashita, I want you to do something for me.'

Yamashita Kunihiro was the head of the Shimokawa Forest Owners' Cooperative for 20 years, and today he is the president of the company Shimokawa Forest Family, which makes laminated wood. Laminated wood is wood made by removing the knots and splinters from raw material wood and gluing only the good parts together. The company was established in 2014. Until then processing laminated wood was one of the ventures of the forest owners' cooperative.

Making laminated wood is a business started by Harada Shiro, the town mayor before last, who advocated Shimokawa's current recycling type forest management system, saying "Let's produce wood products with a lot of value added." The venture goes back to 1990. At first, Harada went around to factories in town and told them about the need to make laminated wood, but they all turned him down, saying it isn't profitable or they couldn't do it. But Harada's determination was not shaken, and he talked to the forest owners' cooperative. 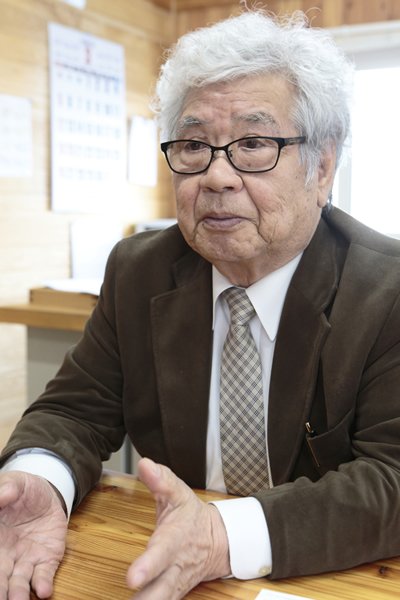 Yamashita Kunihiro has been involved in the forests of Shimokawa for about half a century.

"Mr. Yamashita, I want to ask you to make laminated wood." It was the first such initiative for the cooperative, but Yamashita was confident. The source of that confidence was the experience he gained from the success of a charcoal business he engaged in when a larch forest raised over the course of more than 10 years sustained devastating damage from wet snow in October 1981.

"The mountain was ruined in one night, so I had to think about how to somehow prevent the trees from being wasted." So he started producing charcoal from larch, something no one else does. Not knowing what to do, he just dove in. "We were an amateur organization so we talked to various experts and got their help. We all exhausted our knowledge to successfully create and commercialize a new kind of charcoal." This initiative was the birth of the Shimokawa characteristic of "making complete using forest resources with no waste," and it led to its current use of lignocellulosic biomass. 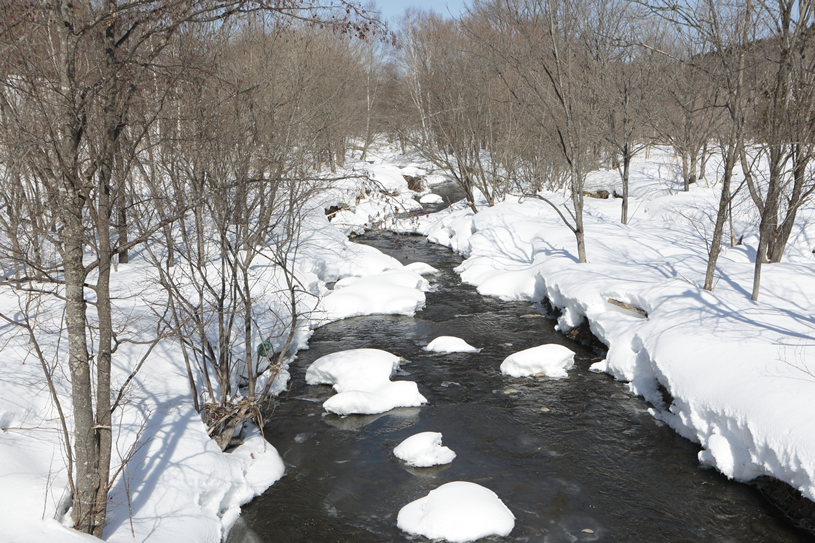 In the past, raw lumber cut in the heart of the mountain was transported down the Nayoro River using the current.

Let's get back to laminated wood. The laminated wood business the cooperative began in 1990 hard time competing with inexpensive wood from other countries, and the cooperative decided in 2012 not to continue it.
However, if the laminated wood business ended in the town, it would have a large effect on other industries such as construction, furniture manufacturing and woodworking, and the community could easily become impoverished. The Shimokawa forest brand that had been established with such hard work would come to an end as well. After repeated discussions, Yamashita and others decided to continue the venture as a corporation. Yamashita left his job at the cooperative and became president of the company. 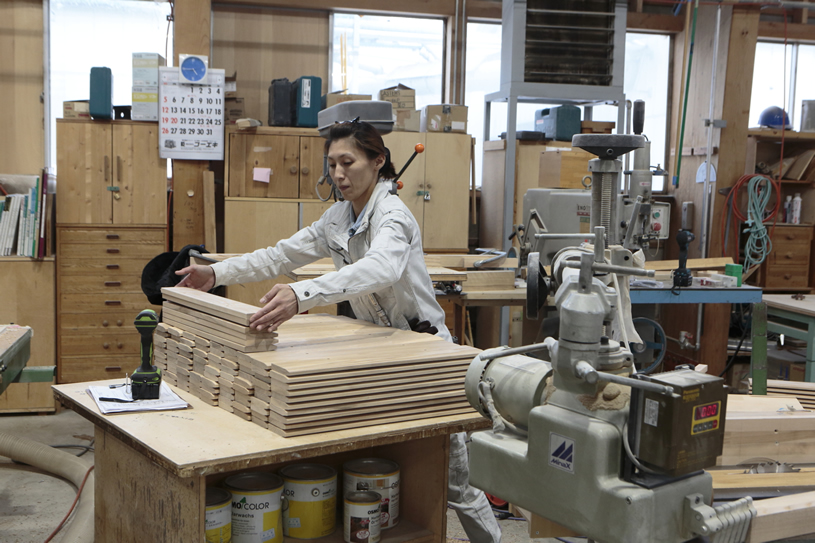 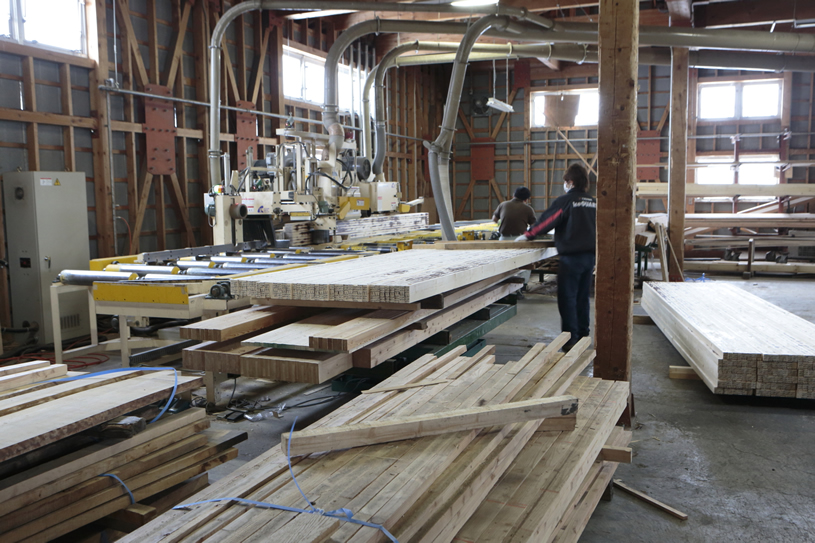 About 20 people work at the sawmill.

In Shimokawa today, eight companies and nine factories are in the lumber business. Many jobs related to the forest support the lives of people in the town and shape the community. It's similar to how water flows from the source of a river and moistens a vast plain. But this current is not flowing from a high place to a low place. I suppose there are people like Yamashita here and there who have removed obstructions damming the river and worked with all their might to prevent the current from becoming stagnant. There were many cases of someone making a request, like Mayor Harada did of Yamashita, to keep the water flowing. 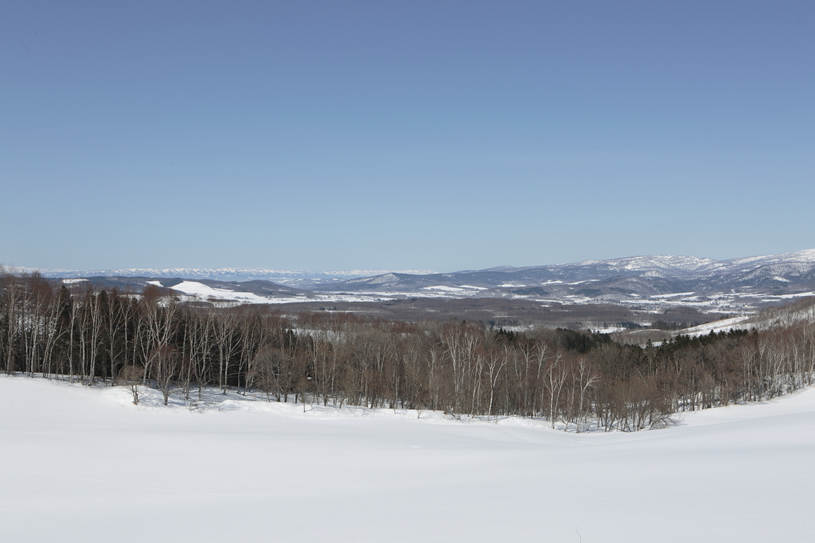