| FEATURE ARTICLES | Spending time at Sapporo Agricultural College Farm No. 2
A walk through the history of Farm No. 2-2

Things that continue into the present 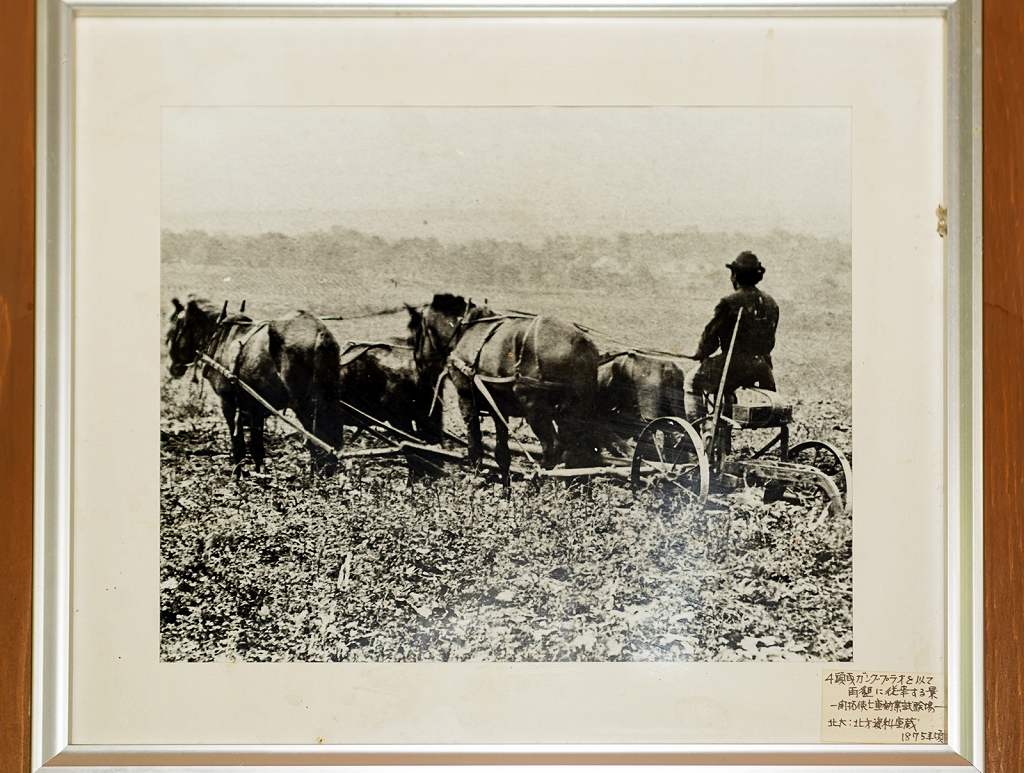 A lot of agricultural equipment was imported for Sapporo Agricultural College and large-scale work using horses was attempted.

Sapporo Agricultural College Farm No. 2, which was created in 1876, was used until 1968 as the Hokkaido University Faculty of Agriculture's auxiliary farm No. 2. Let's delve a little further into the world of the farm, which is connected to the present.
Words by Ishida Mie
Photographs by Kurose Michio
Translation by Xene Inc.

In 1887, Sapporo Agricultural College gave the name Farm No. 1 to land it received from the Hokkaido Government Office. It renamed land it had designated Nokoen, or College Farm, to Farm No. 2. The role of each became clear. Farm No. 1 was a place for students to practice and for various experiments, and Farm No. 2 was a place for thinking about the role of large-scale stock and crop farming in Hokkaido using European and U.S. agricultural methods.

"Looking at the cattle barn built in the Meiji period, there are several points that are still issues today," said Hokkaido University Emeritus Professor Kondo Seiji.
For example, there is the ventilation system of the cattle barn. Ventilation is important in a cattle barn. The model barn and cattle barn of Farm No. 2 are said to have adopted the natural ventilation system published by Dr. Franklin Hiram King of the University of Wisconsin–Madison. Under this system, dirty air, which is warm and light, naturally escapes through a chimney projecting from the center of the building.
Looking at the current model barn and cattle barn, four small chimneys have been added to the central chimney. It is assumed that at first the system didn't work well, and it was repaired and added to along the way through long years of trial and error. "Various systems were invented after that, and ventilation remains an important issue."
Hearing this, the group of historical buildings sounds like a time machine that has continued operating without interruption. 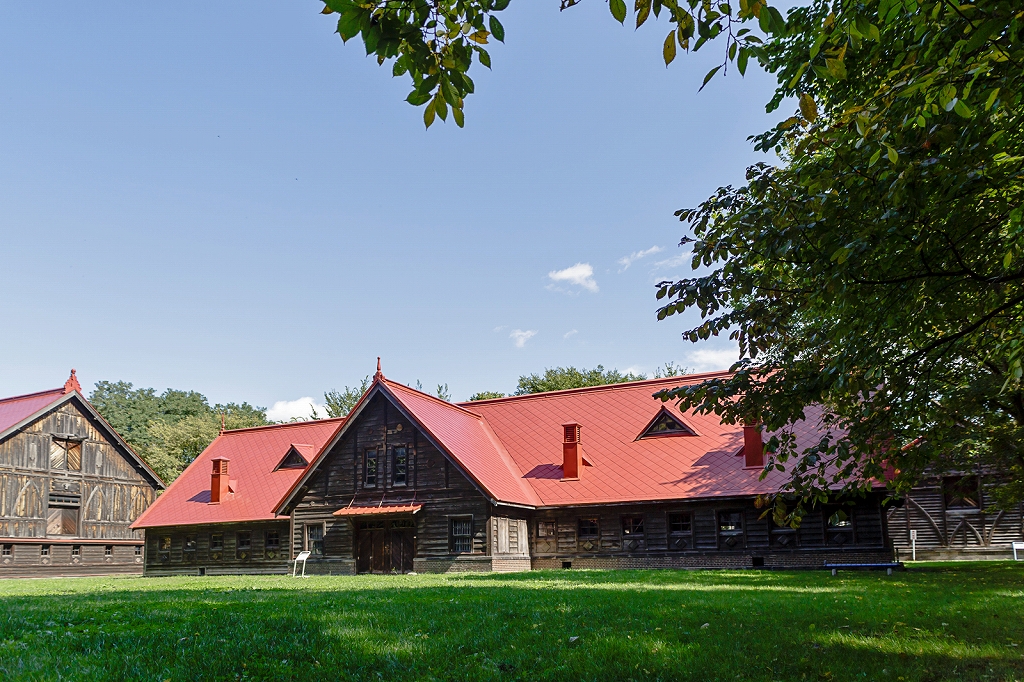 The cattle barn, with small chimneys still in place on the edges of the roof.

"The large-scale agricultural style William S. Clark and others conceived of at the start of the Meiji era (1868-1912) did not continue, due to policy changes and the like," Kondo Seiji says.

Sapporo Agricultural College, which Clark was the driving force behind, recommended large-scale dry field farming using livestock and centered on wheat. Saying Hokkaido was not suited to rice growing, the school proposed that emigrants make wheat a staple food, but people were unable to accept the change to their dietary habits and rice was grown in various places. Lectures and research on rice cultivation took place at Sapporo Agricultural College, and in 1892 the Hokkaido Government Office changed its policy to recommend rice growing. Moreover, the college began adopting as agricultural models not just U.S.-style large-scale agriculture, but also European-style small- and medium-scale farming.
When the Taisho period (1912-1926) began, dairy-farming pioneers advocated the agricultural style of Denmark, which is centered on dairy farming, a type of agriculture resilient to cold damage, and the Hokkaido Government Office accepted that policy. Hokkaido, which is afflicted with severe cold damage, has repeatedly carried out various kinds of research to find the best places and most suitable crops to make use of the characteristics of its land.

It would be hard to claim that the original vision proposed by Clark and others was realized unchanged in Hokkaido. However, the Sapporo Agricultural College of that time adopted various crops and livestock, introduced the latest techniques and equipment, and was without a doubt a place that showed passion for the diverse, wide world.

William P. Brooks succeeded Clark at the college. The corn barn at Farm No. 2 is said to have been designed by Brooks. He lived in Sapporo with his wife for 12 years, and beyond lecturing and practical training at the college, he introduced the cultivation of onions and corn to regular farmers outside the school. While touring the granary, you get the feeling that the man affectionately called Brooks-sensei by students and neighborhood children could appear at any moment. 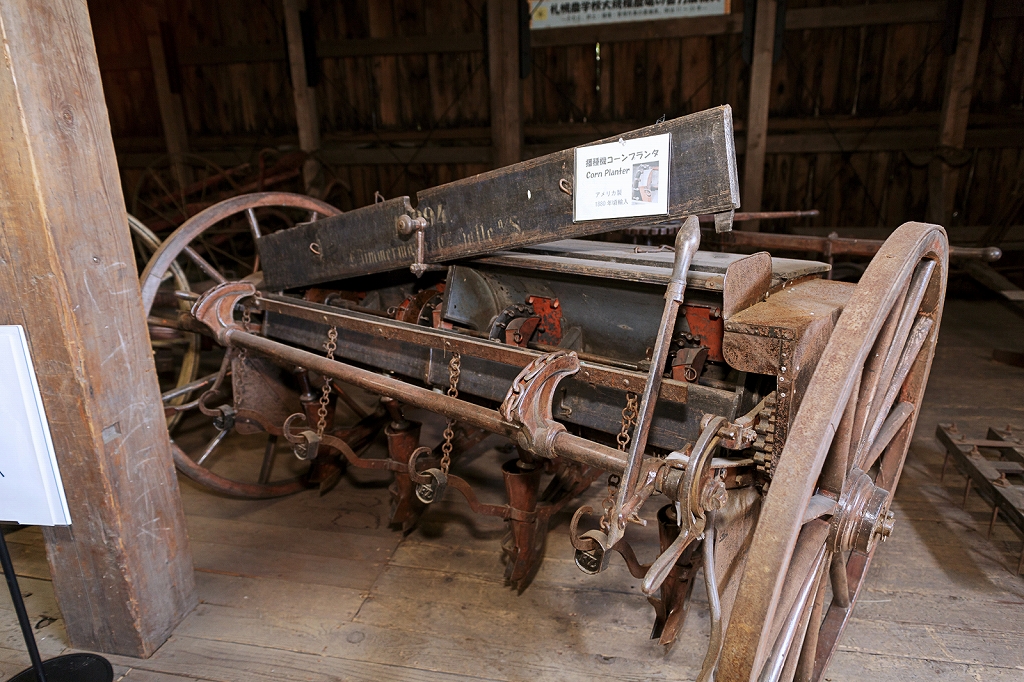 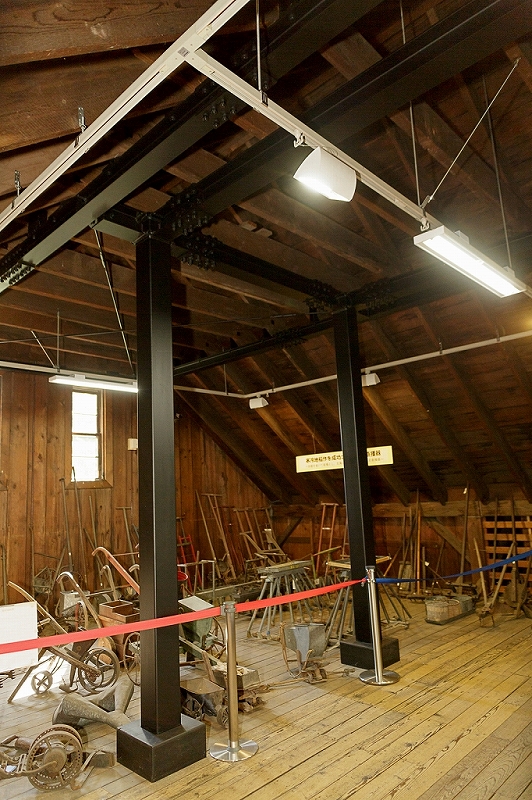 Inside the granary on the second floor