Tonden, from the perspective of the expansive land and windbreaks 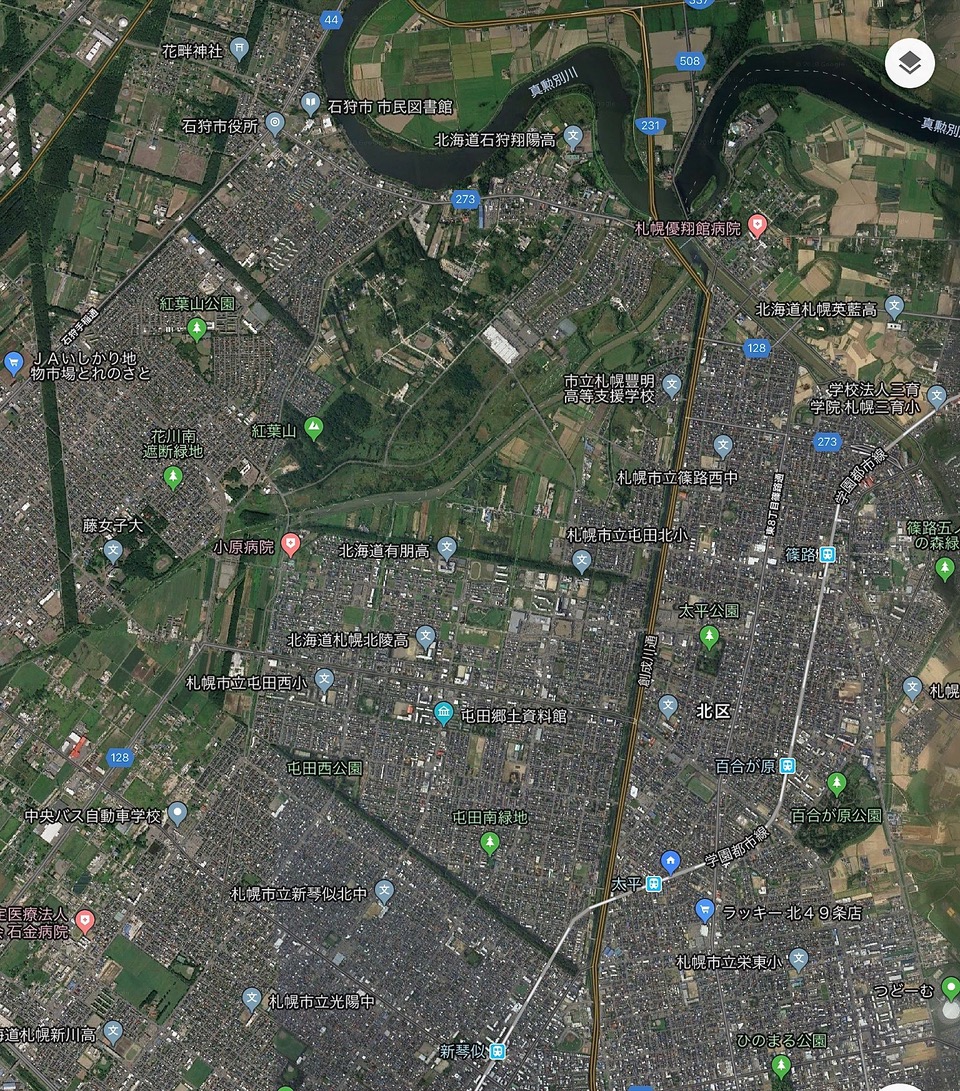 The current Tonden district in which windbreaks in the shape of a square C can be seen (provided by Google, ZENRIN)

If you look at a topographic map of Tonden, you’ll see streetscapes surrounded by windbreak trees, and rows of sand dunes on the northern side. It was these two features on which Sapporo’s last Tonden-hei village was created.
Words and photographs by Taniguchi Masaharu
Translation by Xene Inc.

Windbreaks that display the features of the farmer-soldier village

There is no other part of Sapporo in which the historical features are as distinct as those of the Tonden district. Aerial views of the current Tonden district in the North Ward of the city of Sapporo reveal that, in the past, borders with the Shinoro-hei Village were marked by windbreaks. These windbreaks are historical resources that display the traces of the development carried out by our forefathers.

The area from northern Sapporo to Ishikari suffers strong northwesterly winds from the Ishikari Bay in winter and is hit by easterly winds that blow at the beginning of spring.
In anticipation of these strong winds, when the land was divided, strips of woodland were left untouched in the form of windbreaks during land reclamation. Shinoro-hei Village’s greatest danger was from flooding, but the strong seasonal winds also hindered the lives of the people.

At the turn of the 20th century, railways were extended to all regions of Hokkaido and development spread to the inland areas.
The Tonden district was an independent farming village located far from the urban area. In 1906, Sapporo’s population was only about 17,000. If you had headed south toward Sapporo on the Ishikari-kaido road, you would only have passed six or seven houses along the way.

Tonden’s windbreaks are located to the south, west and north, and to the east is the Sosei River.
The most familiar windbreak in the area is the Tonden Windbreak, which stretches for almost 3 km along the border with Shinkotoni. 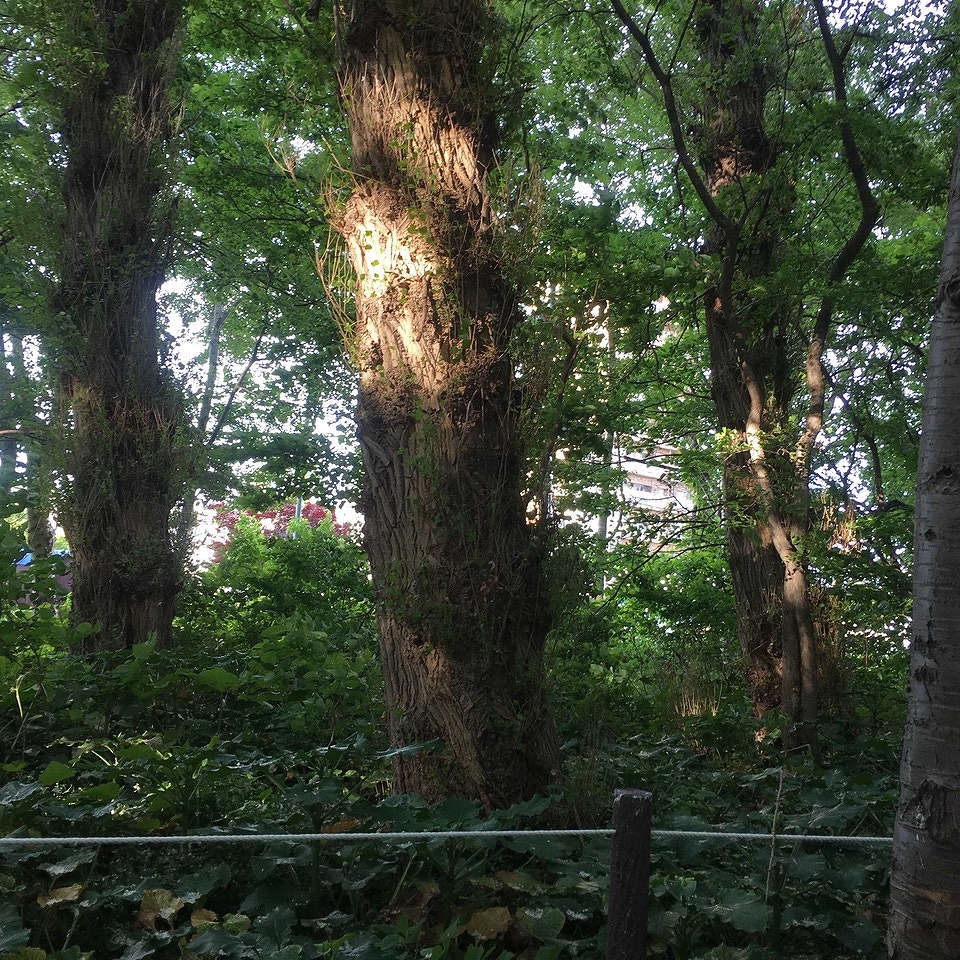 The current Tonden windbreak, where poplar trees were grown

Preparation of the Tonden Windbreak began in earnest in 1914, when 7,000 poplar trees were planted to commemorate the enthronement of the Taisho Emperor.
It was not long before houses were built in the vicinity of the windbreak. Shortly after the war, work continued on the windbreak and the locals became responsible for its maintenance. Subsequently, requests were made for a minimum amount of work to be carried out to create a footpath through the windbreak.

The Tonden Cemetery, where the Tonden-hei farmer-soldiers rest in peace

The Tonden-hei farmer-soldiers of the Shinoro-hei Village were laid to rest in the cemetery located on the sand dunes on the opposite banks of the Hassamu River. In times gone by, the dead were buried and cemeteries were created on sand dunes to mitigate the threat of flood damage. The current address is actually in the city of Ishikari, but the cemetery is managed by Sapporo City.
The cemetery is accessed from Tonden via the Momiji Bridge that spans the Hassamu River. This bridge is also known as the “bridge of tears”, after the tears shed by those looking back as they crossed the bridge after burying the deceased. 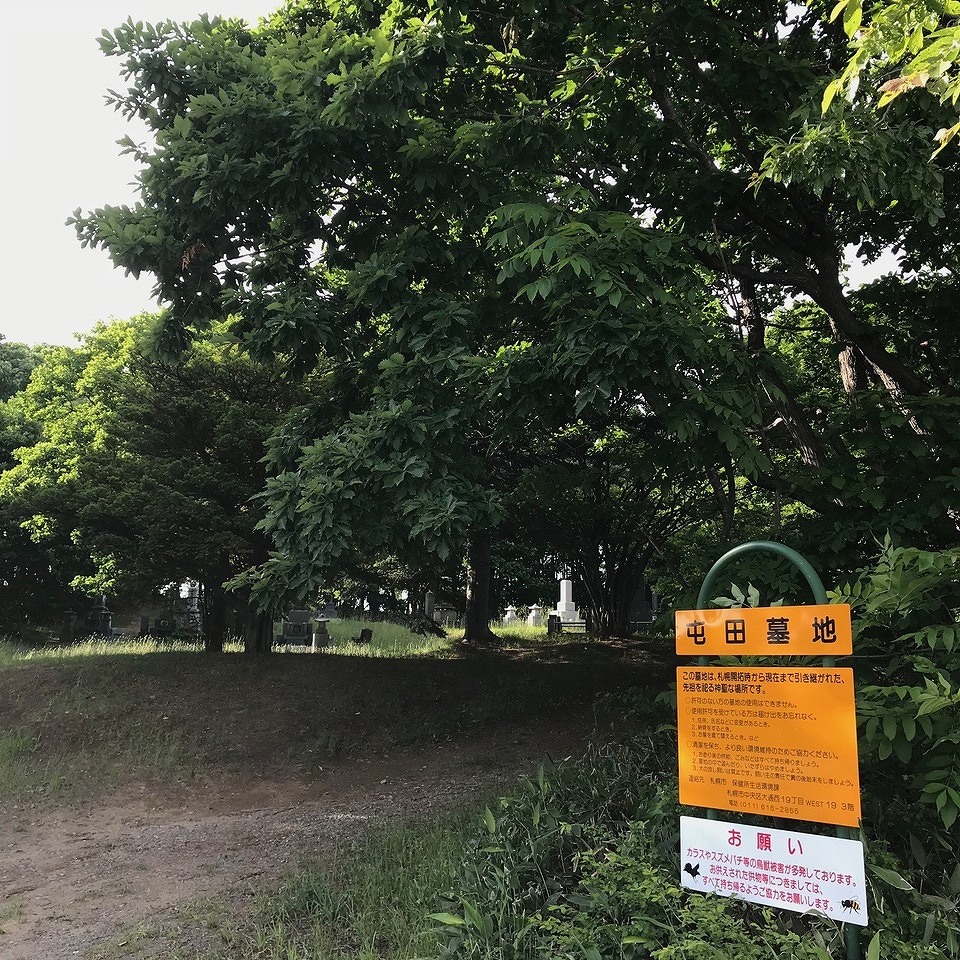 The name of the Momiji Bridge is derived from the Momijiyama Sand Dunes. But why are there sand dunes inland? Momijiyama Sand Dunes extend parallel to the coast, five or six km inland from the Ishikari Bay. Development means that now only a fraction of the dunes remain but in the past they stretched for 15 km from the foot of Mt. Teine to Bitoi on the opposite banks of the Ishikari River.

Approximately 6,000 years ago, global warming at the time meant that the sea level was several meters higher than it is today. Many parts of present-day Sapporo are below sea level. Sandbanks were created by sea currents and winds. As they grew, these sandbanks began to block the mouth of the bay and as the global warming ended and sea levels dropped, soil and sand washed down the Ishikari River tributaries built up on the inner banks. Approximately 5,000 years ago, the whole bay became land and the sandbanks became sand dunes on the land. This is the origin of the Momijiyama Sand Dunes.
Although the area was land, in still wasn’t land that was habitable by humans. The rivers that flowed from the Teine mountain range meandered through the dunes before joining the Ishikari River and the Jomon people lived among the dunes along the banks of the rivers. Many traces of salmon fishing in the rivers at the time have been found. Indeed, the discovery of an advanced wooden salmon trap at the Ishikari Momijiyama No. 49 Remains in the mid-1990s was big news.

The land on which the soldier-farmer villages were built was low-lying land that built up in the bay. When the rivers flooded, the Momijiyama Dunes made it difficult for the water to subside. The existence of the Tonden Cemetery amid the residential area clearly shows the history of the land on which the Shinoro-hei Village was formed.