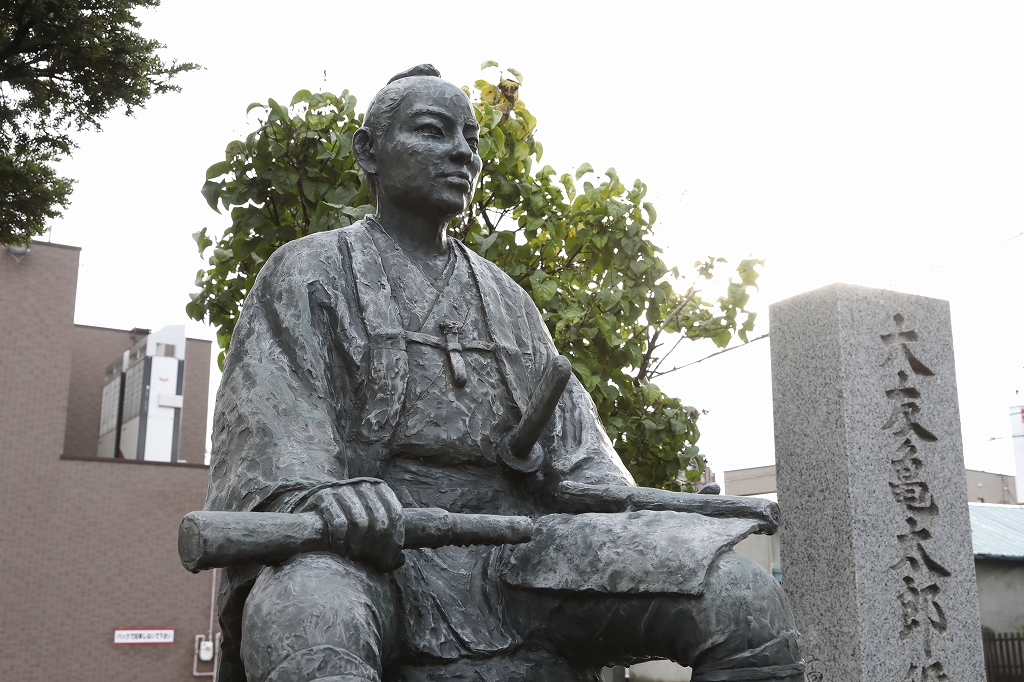 The statue of Otomo Kametaro at Sapporo-mura Kyodo Kinenkan (Sapporo Village Museum). Sapporo Village covered almost the same area as the area of the current Higashi Ward of Sapporo.

Otomo Trench was the base of what became the Sosei River, which divides Sapporo into east and west. We follow the footprints of Otomo Kametaro, who dug the 4 km-long irrigation canal in four months, and laid the foundations of the city.
Words by Ishida Mie
Photographs by Ito Rumiko
Translation by Xene Inc.

Sapporo Village Museum was created to convey to future generations the struggles and achievements of our ancestors, particularly the 2nd and 3rd generations of Sapporo Village settlers. Our guide was the Chair of the Museum Preservation Society, Tamai Shoko.
The first floor of the museum boasts a large map on which visitors can walk, showing which part of the current Sosei River was once the Otomo Trench. 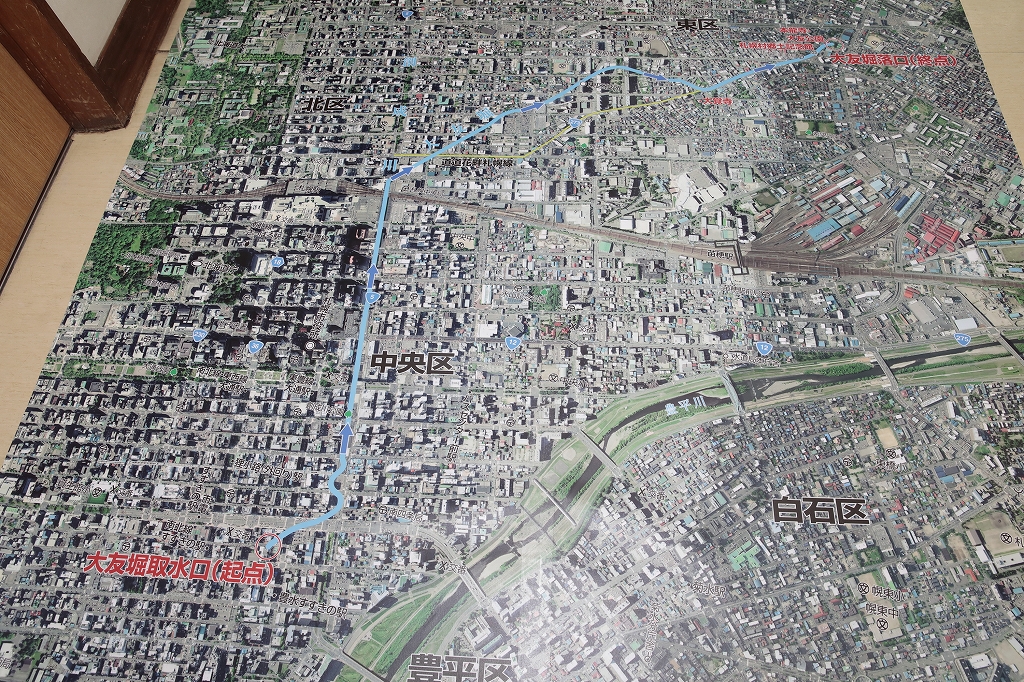 “Otomo Trench was completed in 1866, and Sapporo’s streets were planned around it. If the Otomo Trench had been another shape, Sapporo might have taken on a different appearance,” says Tamai.

In 1858, Kametaro was appointed as a Shogunate official, and the following year began development work in southern Hokkaido. In recognition of his work there, in 1866, he was entrusted with the development of the Ishikari region at the age of 32. 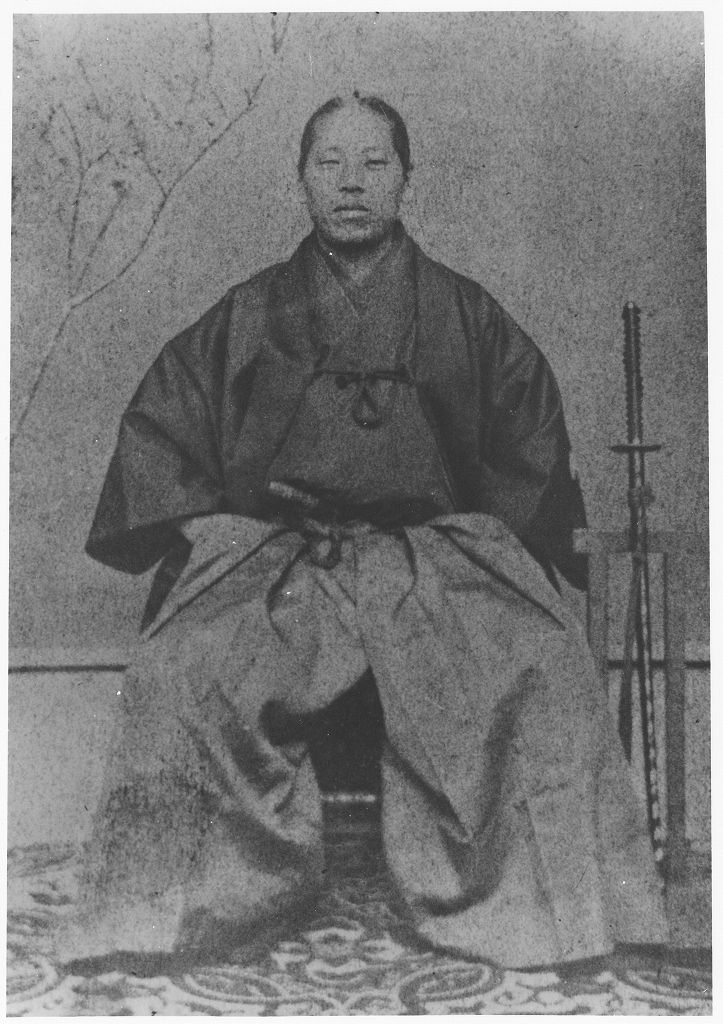 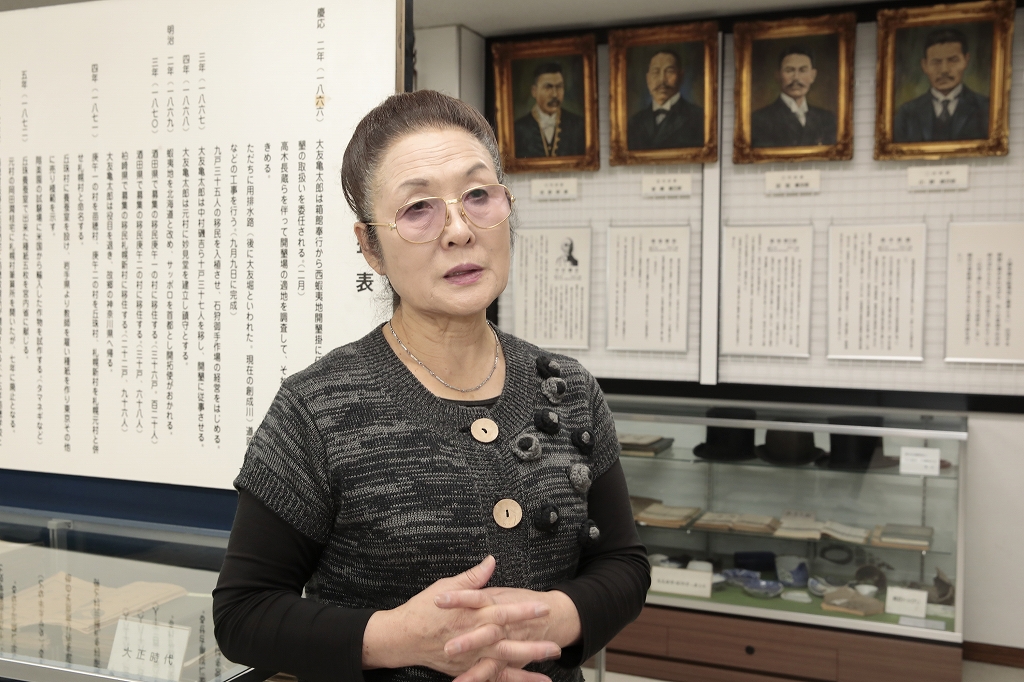 After his appointment in Ishikari, Kametaro divided up the primeval forest of the Ishikari Plain and determined the central part of the development to be the area in which the museum currently stands. The land was fertile and suitable for farming and, if the river was utilized, he believed transportation would become convenient. Surveys were carried out and the construction of irrigation canals, roads and bridges that began in June 1866 were completed at the beginning of September. Measuring approximately 4 km long and 1.5 m deep, the irrigation canal’s construction was a large-scale project that utilized the most advanced technology available at the time, as well as 40-50 laborers every day.
Subsequently, the surrounding land was cleared and soil was brought in fill low-lying areas. In 1867, approximately 20 farming families settled and the development of fields and rice paddies began in earnest. Approximately one hectare of land along the river was distributed to each of the farms.
However, three years later, at the age of 37, Kametaro left Hokkaido in despair as the policies of the Meiji government changed several times over a short period of time.

In 2018, “Otomo Kametaro’s achievements and the Otomo Kametaro Trench remains” were selected as a Hokkaido Heritage, and Kametaro’s achievements once again became the focus of attention. Chair of the preservation society, Hashiba Yoshimitsu says “I think the development of Sapporo started here; I’m proud of that and want to protect the great history of our ancestors and convey it to the people of the future.” 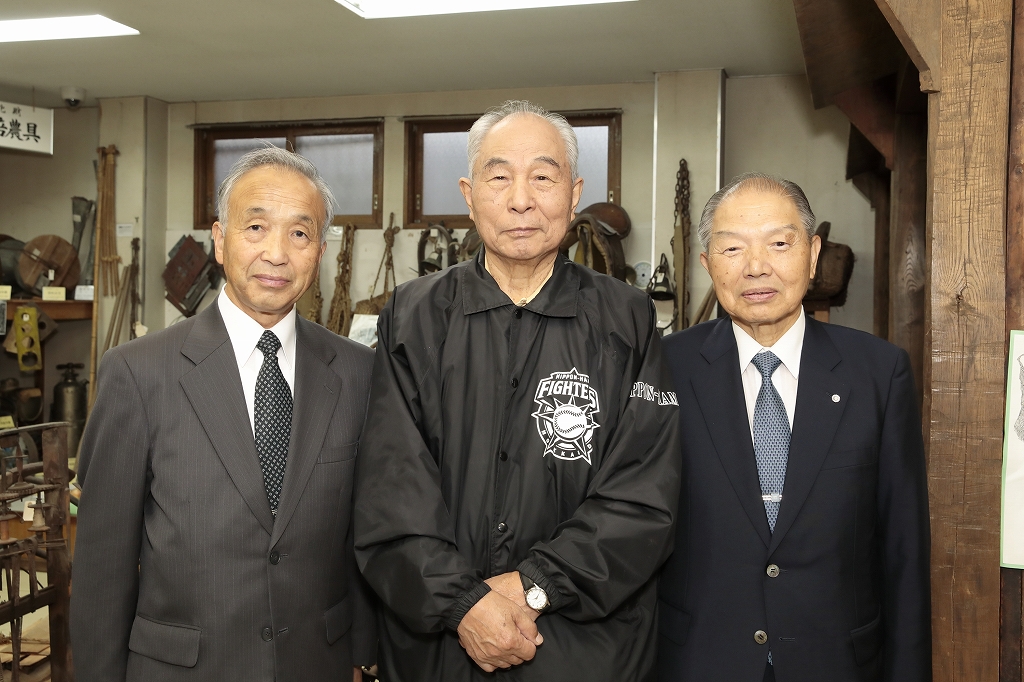 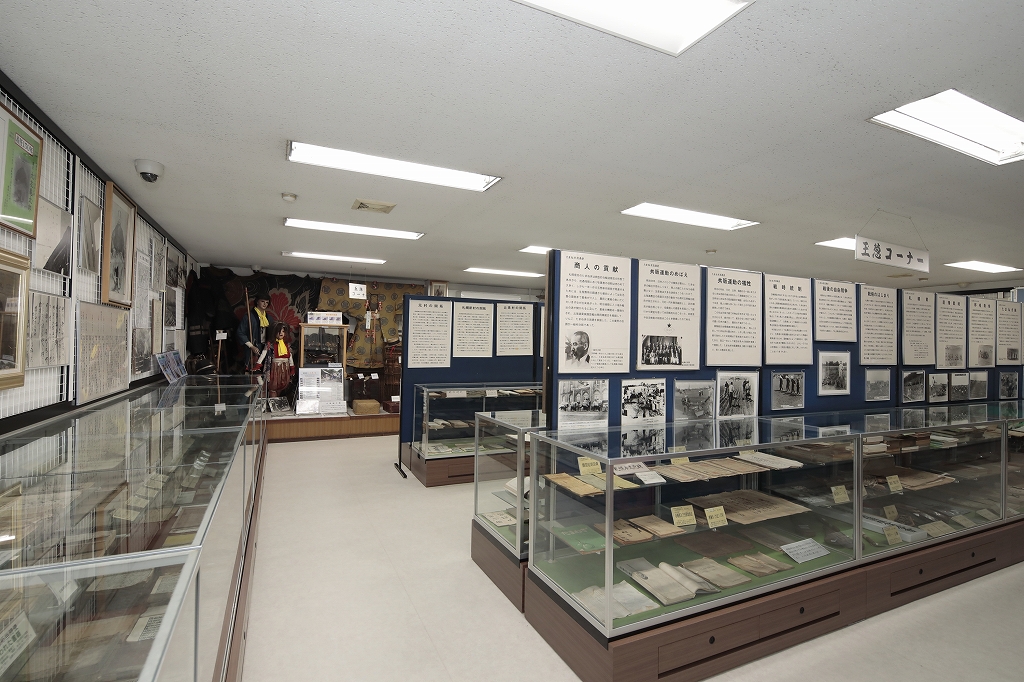 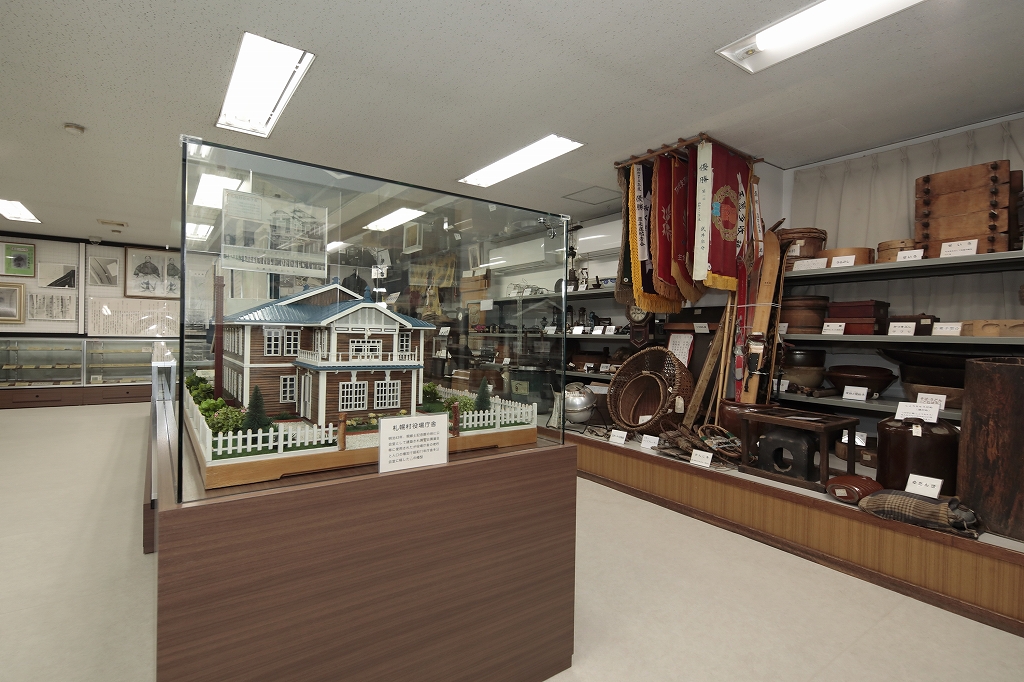 As well as materials related to Otomo Kametaro, the Sapporo Village Museum exhibits other materials that help explain the history of the region. 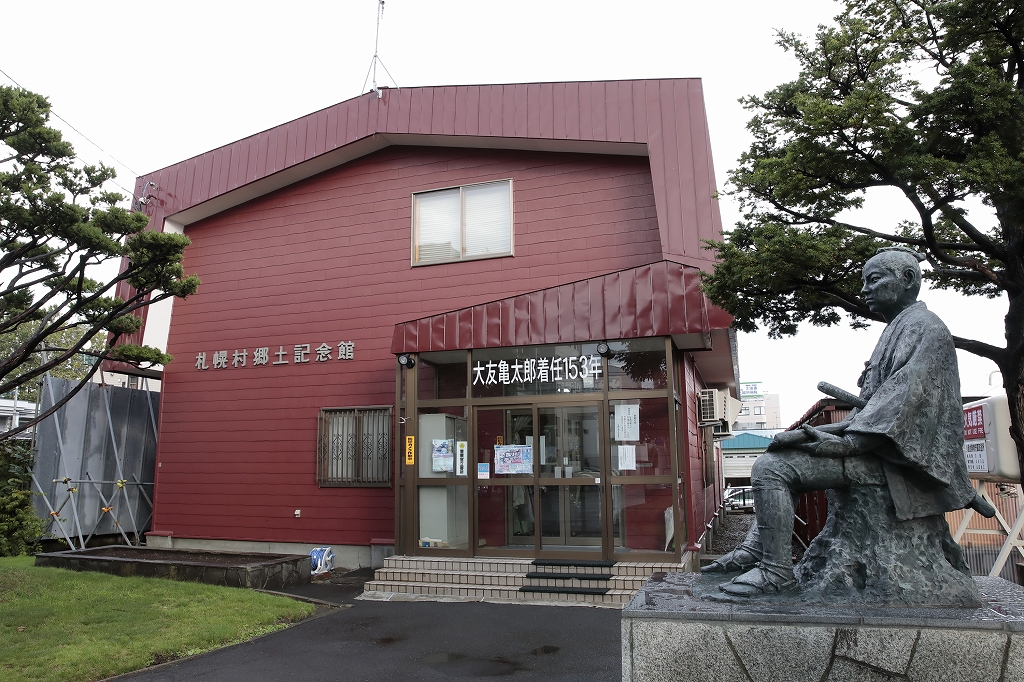