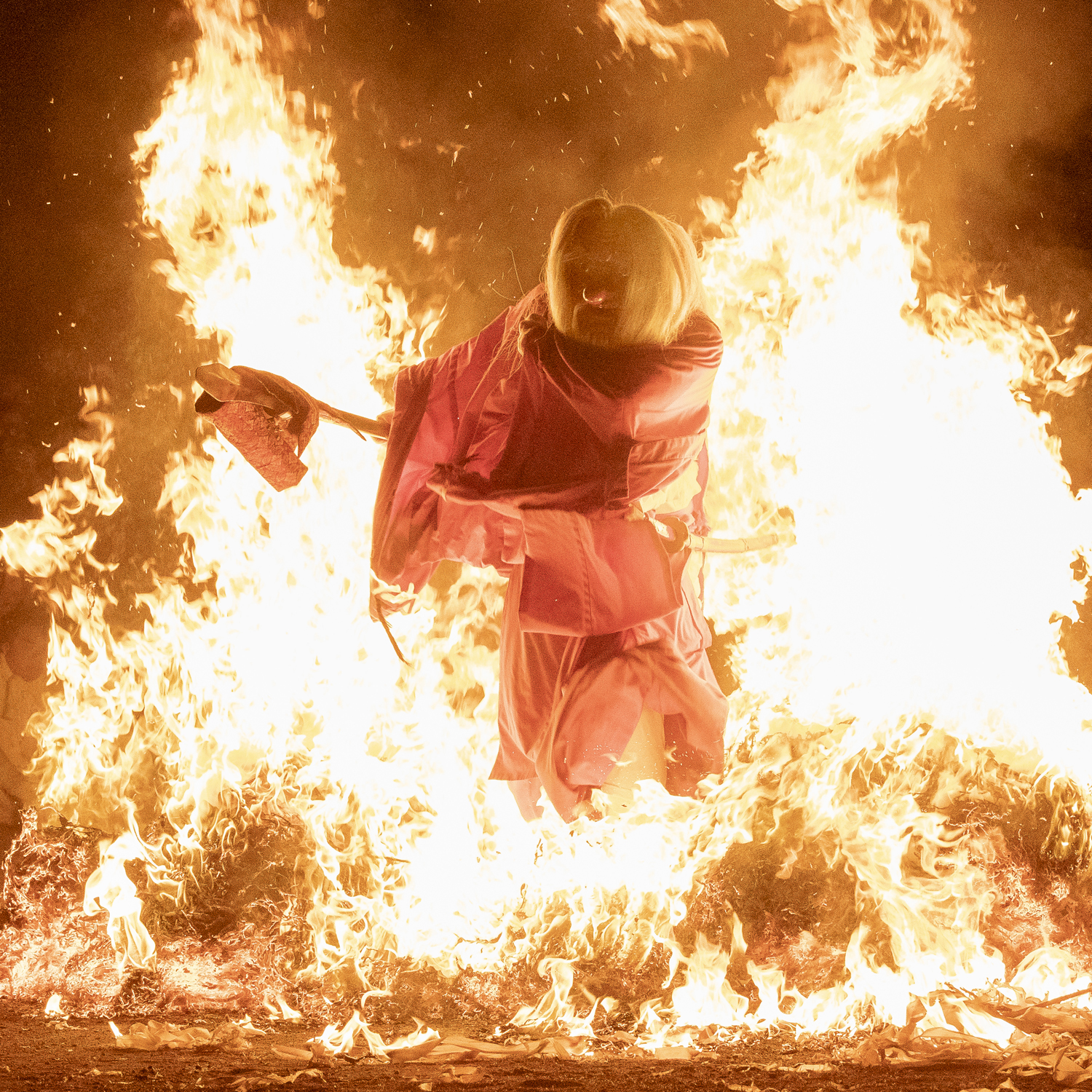 Folk performing arts in Hokkaido include indigenous performing arts by the Ainu people and those brought over from those outside Hokkaido when moving here (Nishitsunoi Masayoshi, Minzoku Geino (Folk Performing Arts), Gyosei Corporation). This installment will take a closer look at the folk performing arts of the Japanese people in Hokkaido. Since folk performing arts have developed in close association with mutual exchange as well as the climate of the local communities where they are passed down, they are not always brought to Hokkaido from other places in Japan without undergoing some changes. They have a variety of characteristics, including those that have regional commonalities in their spatial distribution and those that reflect the history of the village.

Although Japanese folk performing arts in Hokkaido are newer than those in the prefectures of Honshu, there are not many examples like the Matsumae kagura dance that can be traced back to a written history. The Fukuyama Hifu, a comprehensive compilation of historical documents of the Fukuyama clan (Matsumae han), describes this kagura dance as an official event of the clan in 1674*. Matsumae kagura has been passed down by priests in southern Hokkaido. In addition to being performed in festivals in southern Hokkaido, today it is also performed in festivals in the Rumoi area up north along the coast of the Sea of Japan. The reason for this distinctive spatial distribution is probably due to their association with the prayers of people who moved to the area in search of fishing resources, praying for big catches and safety at sea.
The origin story of the Esashi gokatte shishimai deer dance in the town of Esashi in southern Hokkaido also demonstrates regional characteristics of the dance, which is said to have been passed down by the somafu lumber workers of the southern Tsugaru region who were employed by the Matsumae clan. Just as the Matsumae kagura dance formed a cultural sphere reflecting the history of exchange between southern Hokkaido and the Sea of Japan coastal region through fishing, the shishimai deer dance may have forged a cultural sphere with the southern Tsugaru region across the Tsugaru Straits through their shared regional characteristics, such as developing the Hiyama region and forestry.
According to literature, there are 27 examples of yakko processions, which symbolize the procession of feudal lords, in Hokkaido. In particular, the yakko-furi of the Ainuma yakko in the Kumaishi district of Yakumo, which has been passed down in southern Hokkaido, seems to have been incorporated into festival processions in the Edo period (1603-1868) as a form of elegance. 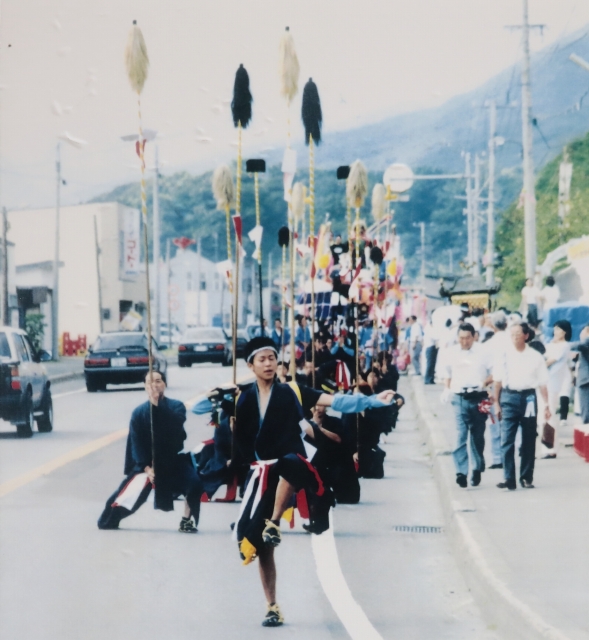 Popularization of the Shishimai Lion Dance 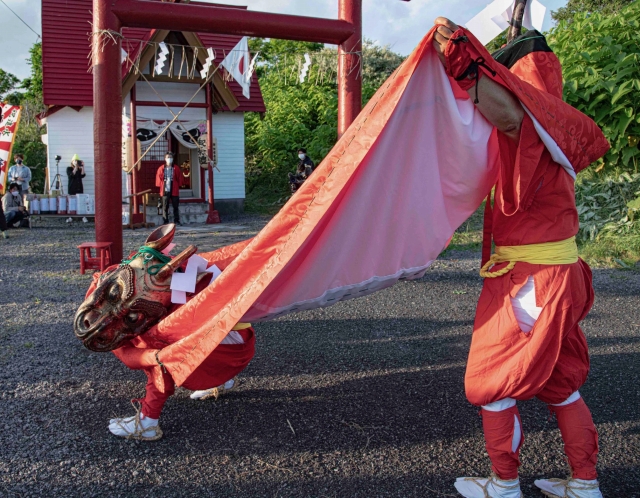 The Japanese government enacted the Basic Act on Culture and the Arts in 2017, clearly stating that it will not only preserve cultural properties, which are regional treasures, but also incorporate a wide range of other fields, including tourism, community development, welfare, education, and industry. The Hokkaido Outline for Conservation and Utilization of Cultural Properties, which was formulated in 2020, is also quite geared toward utilizing folk performing arts. This was great news for municipalities seeking to use festivals as a community resource.
However, it is not easy to continue festivals in rural areas, which have been decimated by a declining population. In addition, the three-year-long COVID-19 pandemic has caused festivals to be canceled. Under these circumstances, the town of Furubira decided to hold the traditional Kotohira Shrine Festival. Known as the Sarutahiko (Tengu) fire-walking ritual, this festival attracts many tourists and photography enthusiasts every year. This ritual, in which fire is used to purge impurities, is also held in Hokkaido at the Bikuni Shrine in Shakotan. It is an important event that represents the purification of the fishing community.
The use of festivals is also a learning opportunity for the festival leaders to understand their hometowns. Local ji-kabuki (rural kabuki) in Shinoro and Shinkotoni of Kita-ku in Sapporo, is a form of folk performing art that has this potential. Although the two communities are located in close proximity, there are significant differences in how local ji-kabuki is passed down from generation to generation. Shinoro Kabuki shares the historical view that collecting of materials and publicity activities by the Shinoro Chuo Nursery School children and the Shinoro Kabuki Preservation Society, who are responsible for kabuki, have developed as a rural community, while seemingly diverging from each other at first glance. Meanwhile, passing down of local ji-kabuki in Shinkotoni is based on the recognition of kabuki by Shinkotoni Junior High School as part of its comprehensive learning program and the activities of the Shinkotoni Kabuki Tradition Society, which supports this program, in the pursuit of shared preservation values in the local community. Local ji-kabuki has the potential to be used not only for tourism but also as a form of community learning.