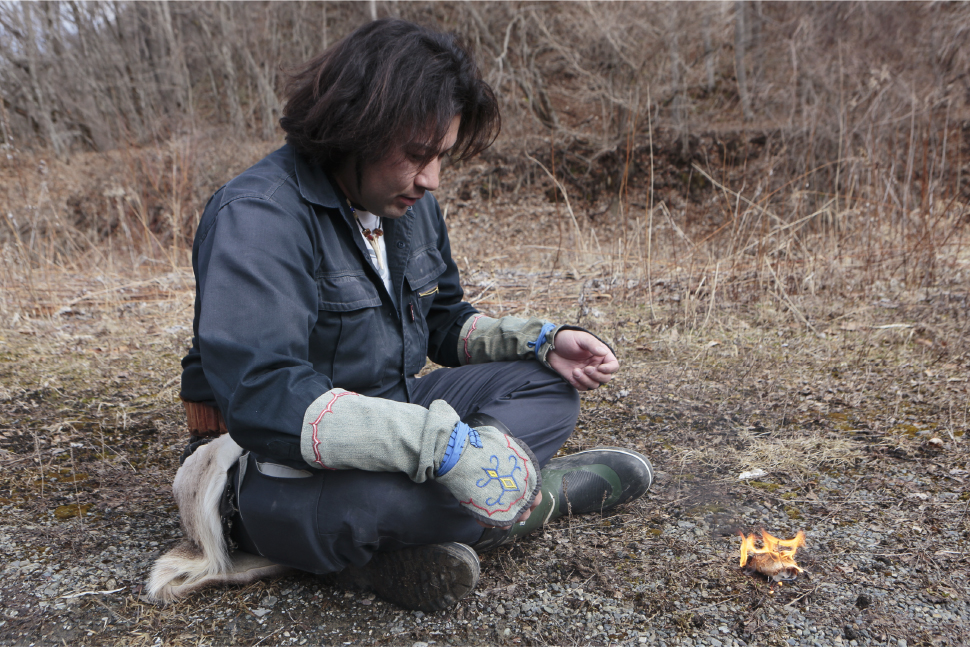 Making a living as a hunter

Atsushi Monbetsu is a professional hunter who ventures into forests and hills in pursuit of Ezo sika deer. He received his hunting license at the age of 30. For the next two years, he made hunting trips while continuing to work as a company employee. However, on the spring of his third season as a hunter, he decided to resign from his job and embark on the career of a professional hunter.

Monbetsu recalls with a laugh, “It was quite difficult to tell my family that I had resigned. And things were a bit tense at home for a while.” But now it seems that his three children look forward to hearing that their father has felled another deer.

Responsible for some 5 billion yen in damages to Hokkaido’s agriculture and forestry industries each year, Ezo sika deer pose a serious problem throughout the prefecture. Deer are also involved in over 1,600 traffic accidents yearly. Ezo sika deer may be hunted year round -- during their official hunting season in autumn and winter when the meat is at its best, and during other seasons as culling of harmful pests.

However, culling of Ezo sika deer as pests is not profitable due to considerable expenses, such as gasoline and ammunition costs, for the sake of killing a single deer. The decision to make one’s entire living as a deer hunter would seem intensely difficult, but Monbetsu speaks of his choice with an easy smile.

“As I developed the confidence that I could make my living as a professional hunter, I felt a growing need to live a life I could be proud of. As challenging as it may be, my determination to succeed is stronger.”

Since his childhood, Monbetsu has been familiar with deer hunters and Ezo sika deer. He had dreams of one day becoming a hunter himself. At the age of 20, a group of hunters let him come along on their trips.

Japan is the most difficult country in the world to own a firearm. Even a hunter with a firearm permit would be in serious breach of law to so much as touch a firearm owned by someone else. Thus, every hunter must carefully select their gun. Broadly speaking, hunting firearms are divided into shotguns or rifles, and it requires at least ten years of experience hunting with a shotgun before a hunter is allowed to own a rifle. To hunt deer, Mr Monbetsu has chosen a “half-rifle”. While able to accurately hit a deer at 100 meters, this firearm is classified as a shotgun in Japan, making it an ideal option for deer hunting.

“I happened to come across just the right half-rifle on sale used, and decided on the spot. However, half-rifle ammunition is quite expensive at 700 yen per shot, so I certainly can’t afford to shoot wastefully.”

Hunting time is from sunset to sundown. When Mr Monbetsu still had his day job, he woke up early and went hunting, then hunted again after work finished. When he killed a deer, it was an hour drive to a specialized processing facility in Shimukappu. He received 12,000 yen per deer, and if the deer have been shot cleanly through the head and bled out, an additional 10,000 yen for the meat. Even while working full-time, Mr Monbetsu bagged 90 deer per year, surprising even veteran hunters.

“Now that I’ve become a professional, my goal is 200 deer every year. Deer have excellent hearing and are very cautious animals, so even getting close is never easy. The only way to understand the behavior of the deer is through long experience in the forests and hills. One thing I’ve really enjoyed about becoming a professional hunter is the admiration of local farmers. There’s a definite feeling of accomplishment in helping to protect their crops.”

Never forget our appreciation for life

In January this year, Mr Monbetsu collaborated with colleagues to present a workshop. “To make a living as a hunter, it’s essential to teach as many people as possible about hunting culture. For our first workshop, twenty people turned out, showing us that people are indeed interested. I hope to put on more workshops in the future.”

It’s now been about a year since Mr Monbetsu became a professional hunter. He remarks, “We must never forget our appreciation for life. Now that I make my living with a gun, the value of life is even closer to my heart.”

As more professionals enter this field, it’s hoped that the Ezo sika deer will become a valuable resource. With development of distribution, processing, and sales networks, deer hunting will become an integrated “sixth sector industry”, and more professional hunting careers will come to fruition like Mr Monbetsu’s.