"Men's doll's houses" that appeal to the playful spirit of youth

A broken tin roof, tatty wooden walls and an indication that someone was there until a few moments ago. Until you see such a nostalgic creation, you may have imagined that doll's houses belonged to the girly world of flowered patterns. This reality that appeals to the more masculine gender can also be said to be "miniature scenes".
Words by Yajima Azusa
Photographs by Ito Rumiko
Translation by Xene Inc. 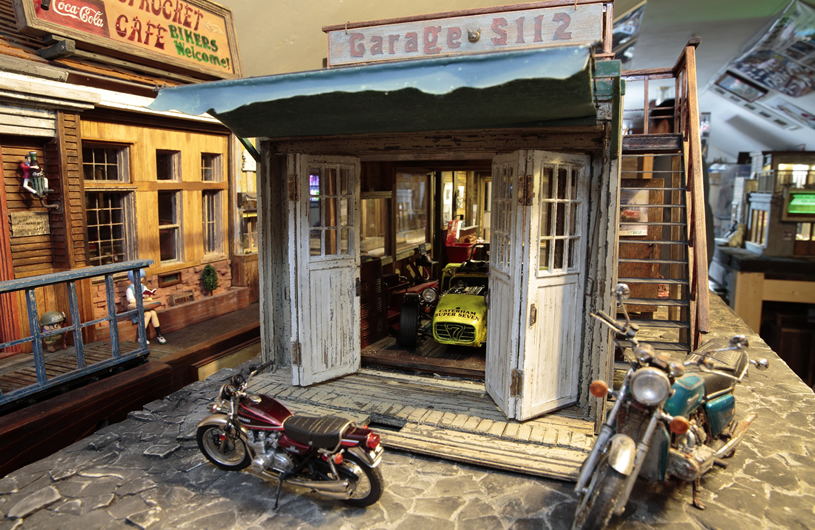 A faded sun shade, paint peeling from the doors, a rusting sign – textures exposed to the elements look somewhat like men's medals of honor. It's almost as if you can hear Bob Dylan songs playing on the radio, and smell the engine oil and sweat. Clearly different from the pretty doll's houses imagined by females, Sugiyama Takeji calls his creations "men’s doll's houses".
"What I imagine could be America or could be Hokkaido in the 60s or 70s," explains Sugiyama. "I've always liked plastic models of classic cars and bikes since I was a child, and basically only create garages and cafés that feature or involve those things." 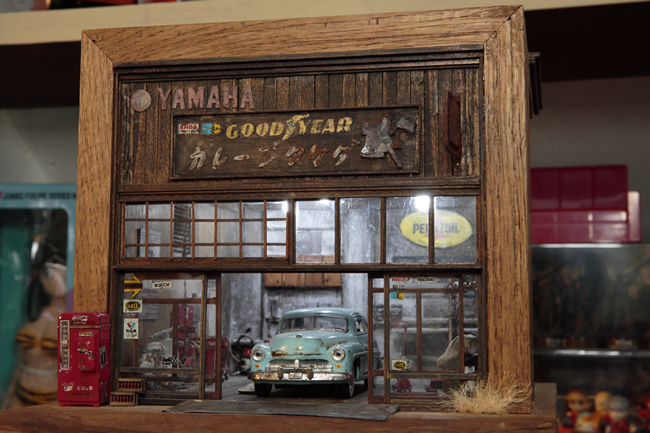 A standard doll's house is one-twelfth scale. "Females are usually good at making small things such as food and crockery from clay but few are particular about the reality of the scale of the building itself. I was born the son of a builder's merchant so I remember the measurements of houses. I can imagine the sizes just by looking at photographs and so I can make the models without plans."
The materials, too, are not standard styrene board; the frameworks are built from wood that is actually used in the construction of buildings, with wooden walls, too. 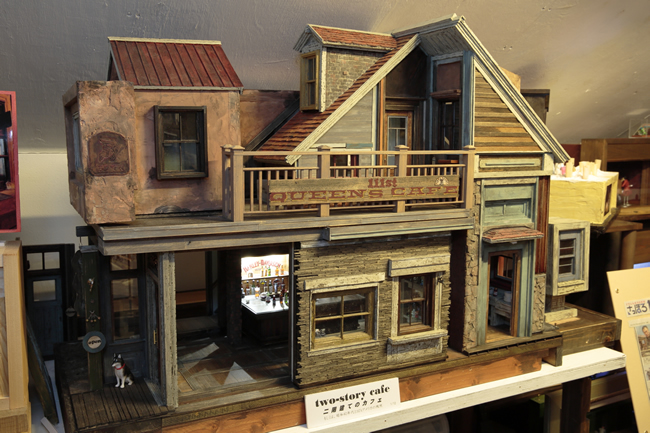 Stuck to the walls are signs made from whisky coasters

Attention to detail is not spared on the blind spots, either, with the cars and bikes purposely soiled by rust and dust. "The models are built so that the windows and doors can be opened and closed, and fittings can take seven to ten days to make. Larger creations may take six months to complete." 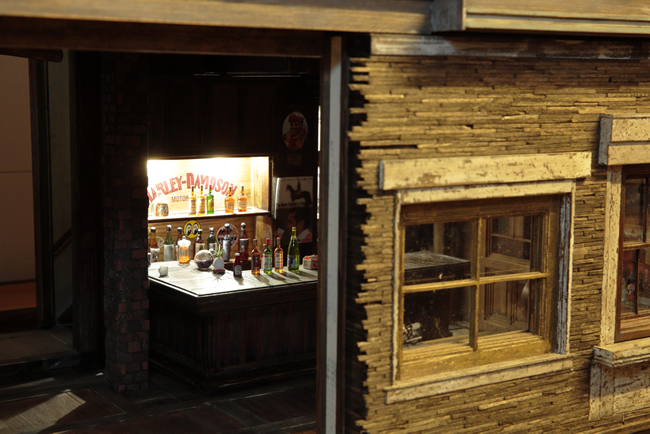 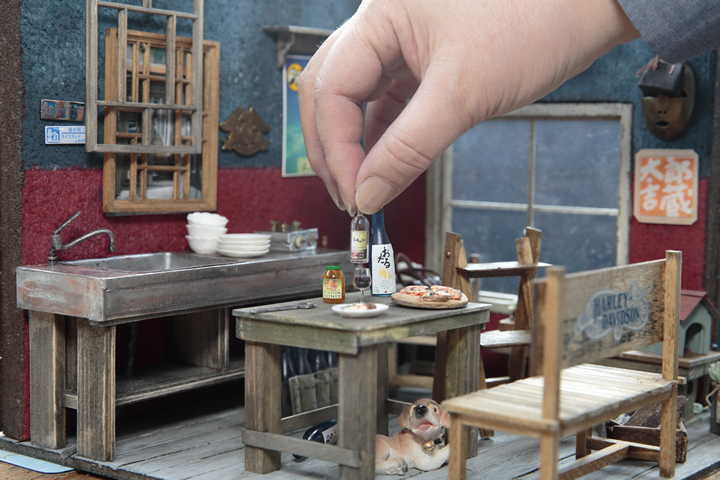 The decision to make a living from the world of miniatures

After closing the builder's merchant inherited from his father, Sugiyama began living in Tokyo. When he opened a small shop with approximately 6.6 m2 of floor space, specializing in figures, in Nihonbashi Kayaba-cho, he first encountered the work of the 3D artist Haga Ichiyo, who created models of the Tokiwa-so residence where the famous Japanese manga artist Tezuka Osamu lived, and the stone house that appeared in the popular TV drama Kita-no Kuni Kara. Sugiyama was inspired into deciding to make a living from creating such models. He attended model-making classes and traveled with Haga to New York as his assistant at a personal exhibition held there. 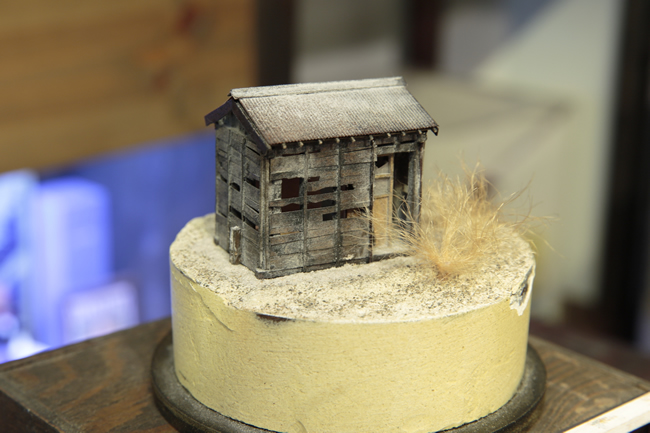 When he returned to Takikawa ten years ago, he built the Sugiyama Atelier. The first floor comprises a well-lit workspace, tool room and living quarters, where somehow the distinctive perspective of his work can be seen all around. The second floor is like a toy box brimming with characters and goods familiar to those who lived through the period in which his work is based. Hours of enjoyment can be spent here, just peeping into the world of each of the individually hand-crafted pieces. 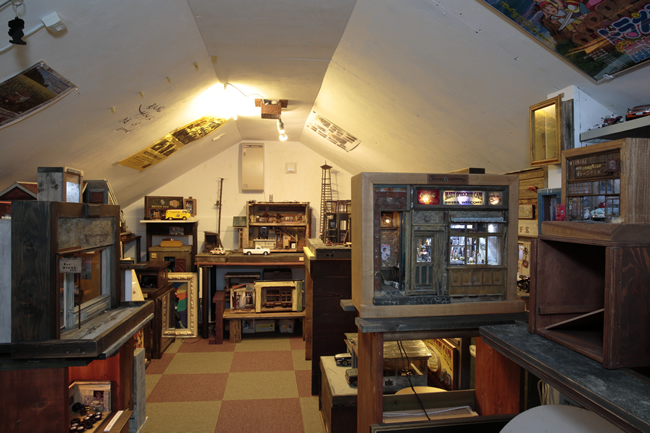 Work is exhibited on the 2nd floor of the Atelier 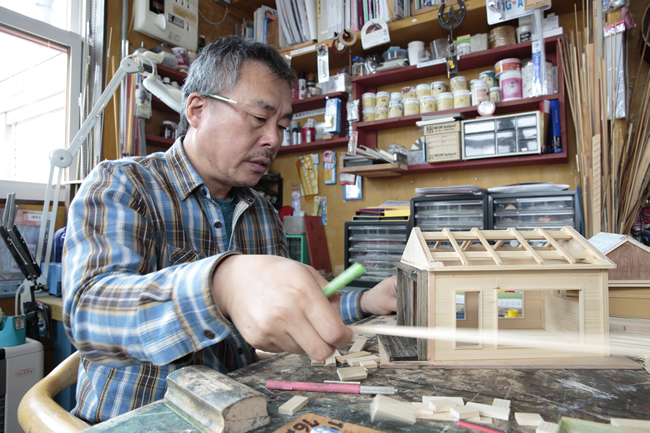 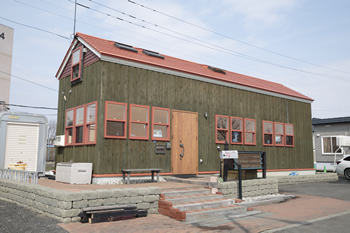