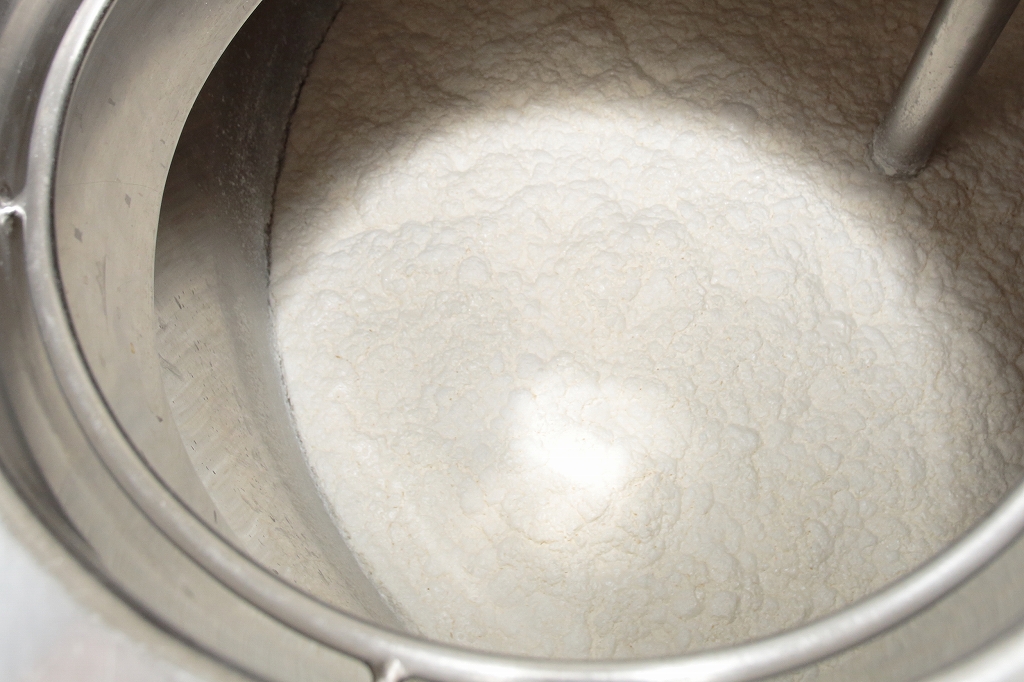 Asahikawa has all the right conditions – the underground water from the Taisetsu Mountains, local rice and cold climate. However, at this northern sake brewery there’s another factor.
Words by Inoue Yumi
Photographs by Ito Rumiko
Translation by Xene Inc.

The brewing of sake in Asahikawa began in 1891. At the time, there was no railway, and in an environment similar to an inaccessible inland island, self-sufficiency was necessary for both rice and sake.

Even when the railway opened in 1898, there was no threat from sake produced in Honshu. The following year, the 7th Division of the former Imperial Japanese Army began transferring to Asahikawa, resulting in a sharp increase in the population. The market, too, experienced an explosive expansion.
The current Takasago Sake Brewery and Otokoyama began doing business in Asahikawa in 1899. Nippon Shusei Seizo (Godo Shusei) was established at almost the same time, in 1900. 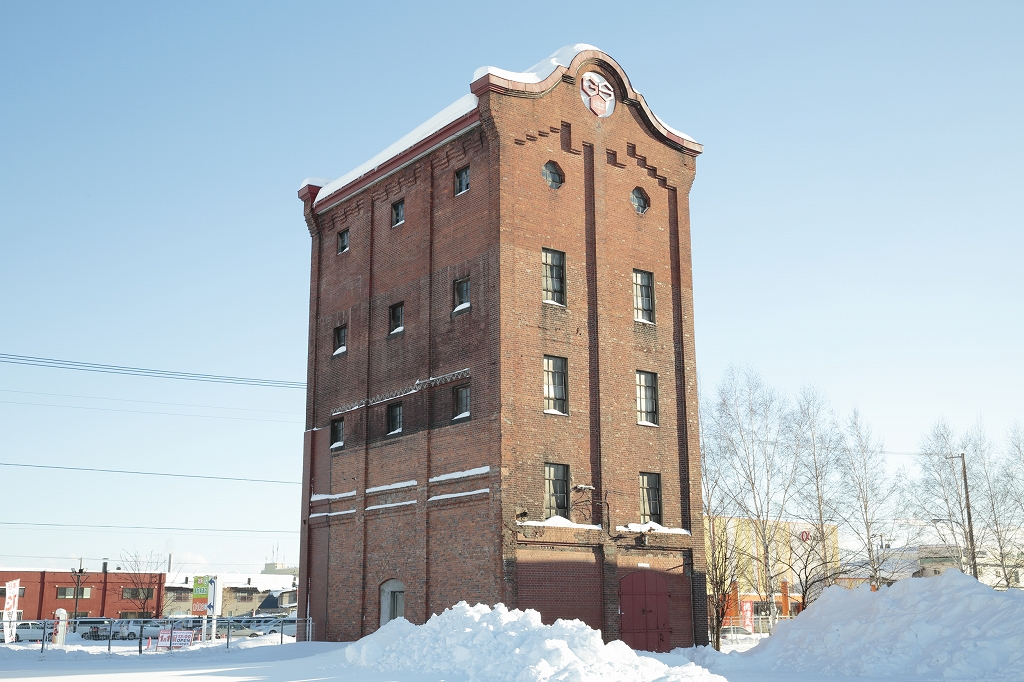 The distillation tower, built in 1914, is a designated Heritage of Industrial Modernization.

Godo Shusei’s predecessor, Nippon Shusei Seizo was established with the aim of manufacturing ethanol but, as a result of the post-World War One recession and the impact of the Great Kanto Earthquake, the company experienced financial difficulties. In 1924, Hokkaido’s four shochu (white spirit) manufacturers merged, and Godo Shusei was born.

After World War Two, Godo Shusei expanded by means of repeated absorption mergers with shochu manufactures as the backbone. In 1963, the headquarters were transferred from Asahikawa to Tokyo, and now Godo Shusei has grown into the core enterprise of the Oenon Holdings Inc. group’s nationwide network. The production of Japanese sake began at the Asahikawa factory in 1966. At the time, it supplied unprocessed sake to Godo Shusei’s Nadanishinomiya factory.
“In the olden days, there was a direct, exclusive railway line from the grounds of the factory to Asahikawa Station,” says Asahikawa factory manager, Mizuguchi Tetsuji. “Even now, 70% of the alcohol produced at the Asahikawa factory is shochu, 20% is low-price synthetic sake, and the remaining 10% is refined sake.” 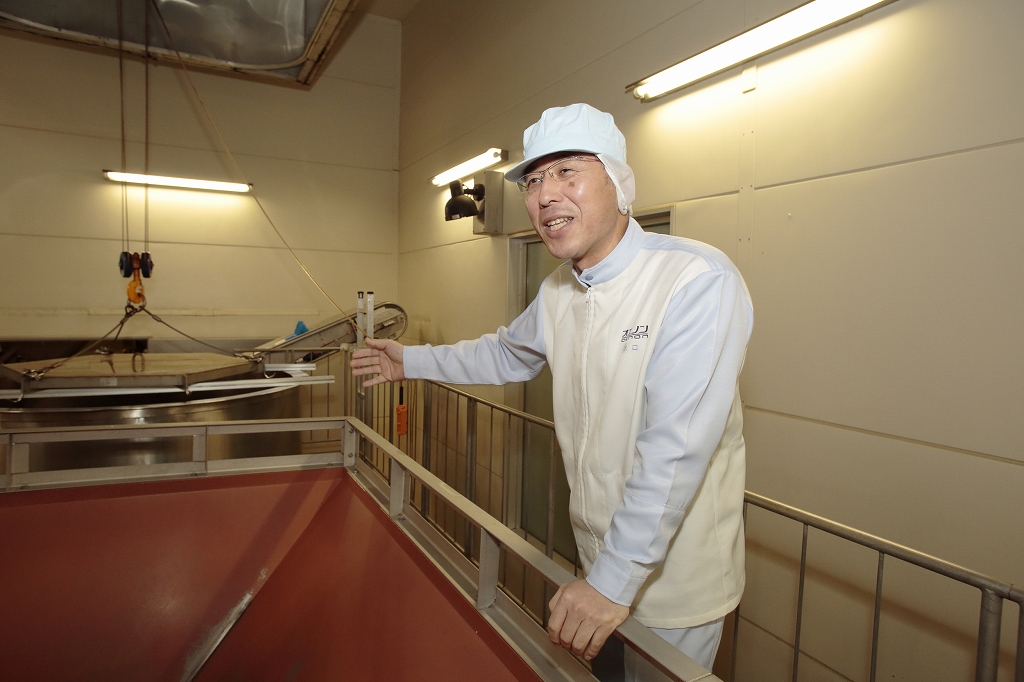 The enthusiasm of the producers

Three features of the Asahikawa factory “Taisetsu-no-Kura” are year-round brewing, full automation and all-Hokkaido rice.
From the beginning, a chief brewer was invited onto the production team but, from 1997, sake brewing techniques were nurtured in-house. In 1998, a fully automated factory was built and year-round brewing began. “Automation allows us to manufacture products with constant, stable quality, and produce a taste that’s close to a hand-made taste. That’s our policy,” says Mizuguchi.

However, automation was not that simple.
“A large part of the sake brewing process relies on the chief brewer’s five senses. At first, it didn’t go as expected and we thought automated brewing would be impossible.” It took 4 years to get results. At the 2004 Annual Japan Sake Awards, the “Daiginjo Taisetsu-no-Kura” received the Gold Award. It also received the Gold Award for three consecutive years from 2013 to 2015, overturning the convention that “good sake cannot be made with machines”. 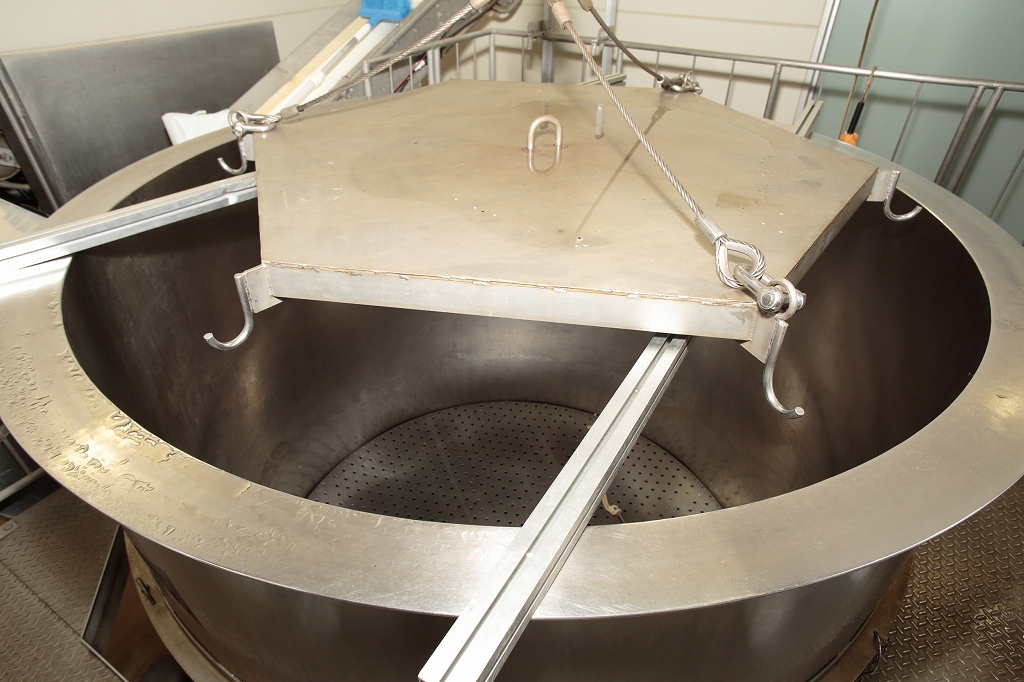 Steamed rice is conveyed to the tanks via lifts 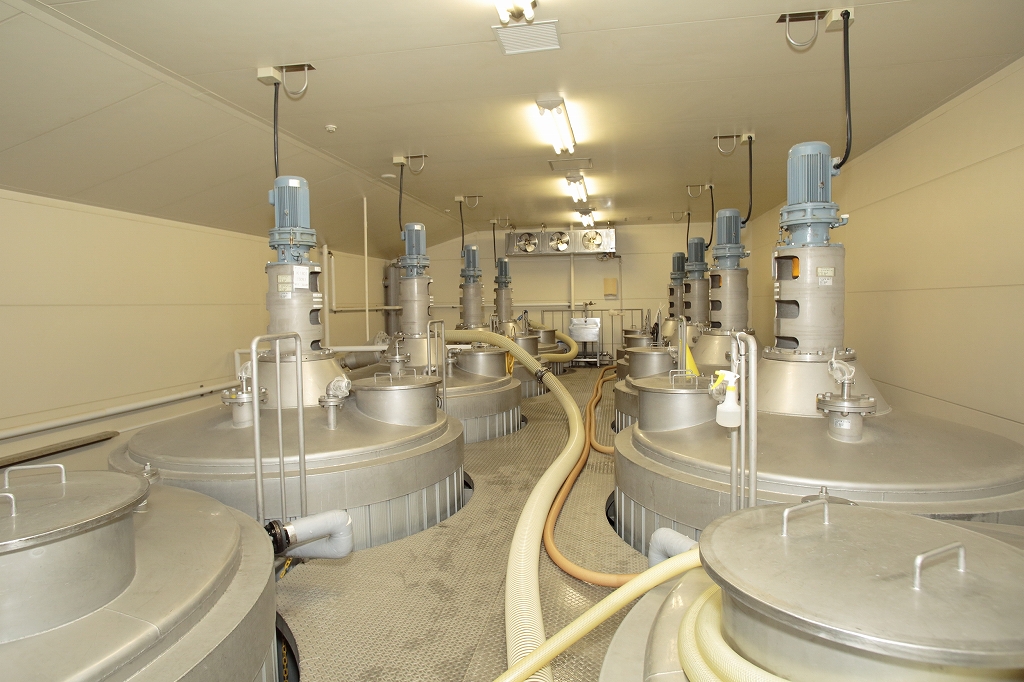 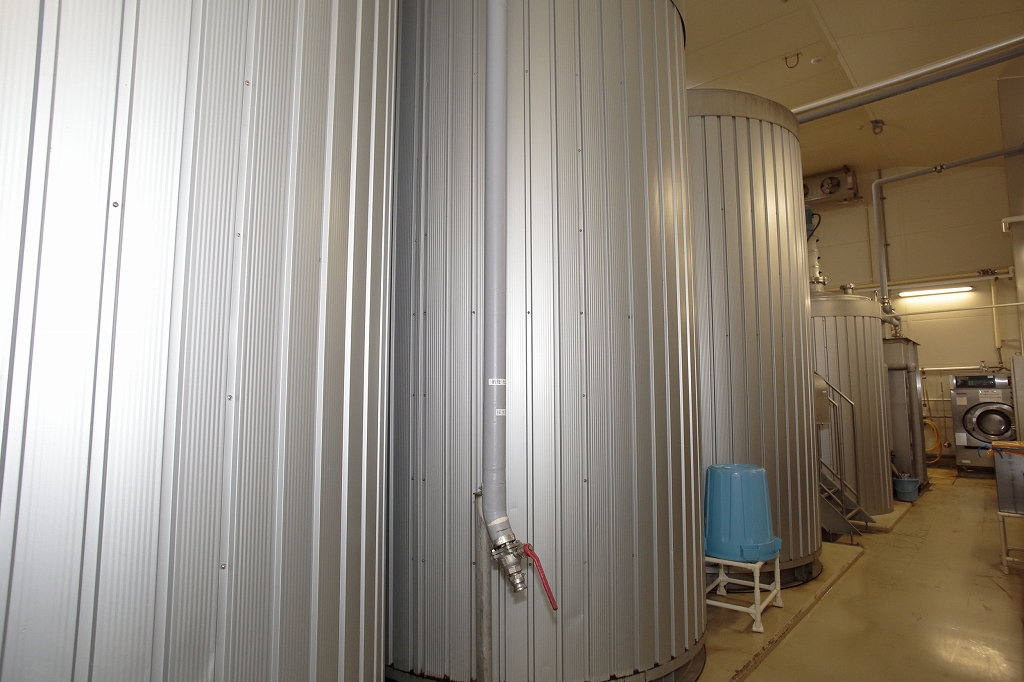 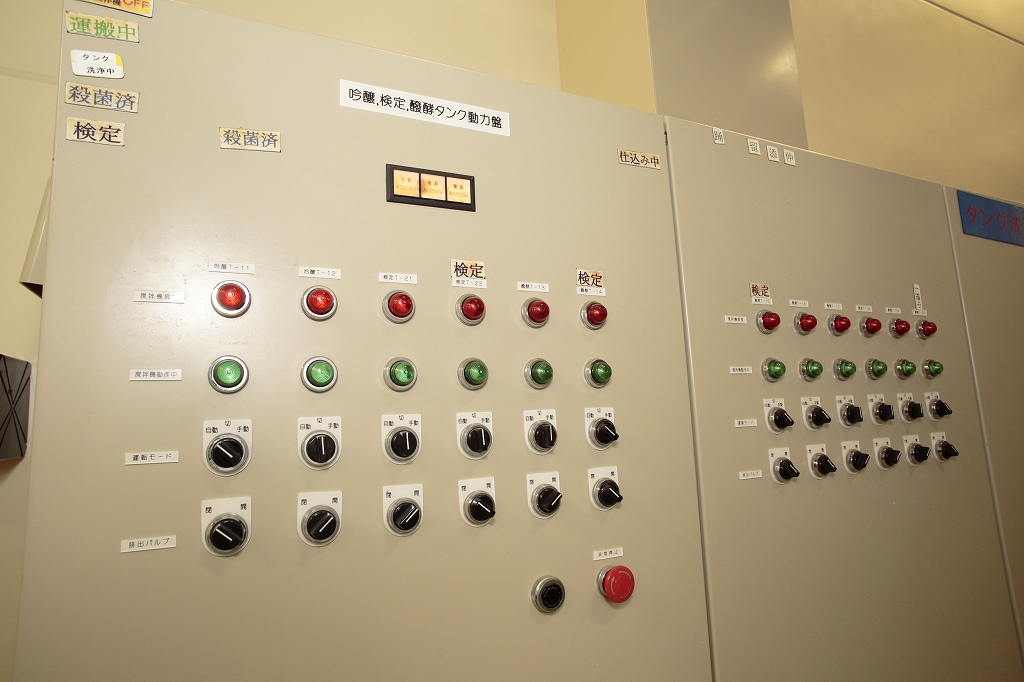 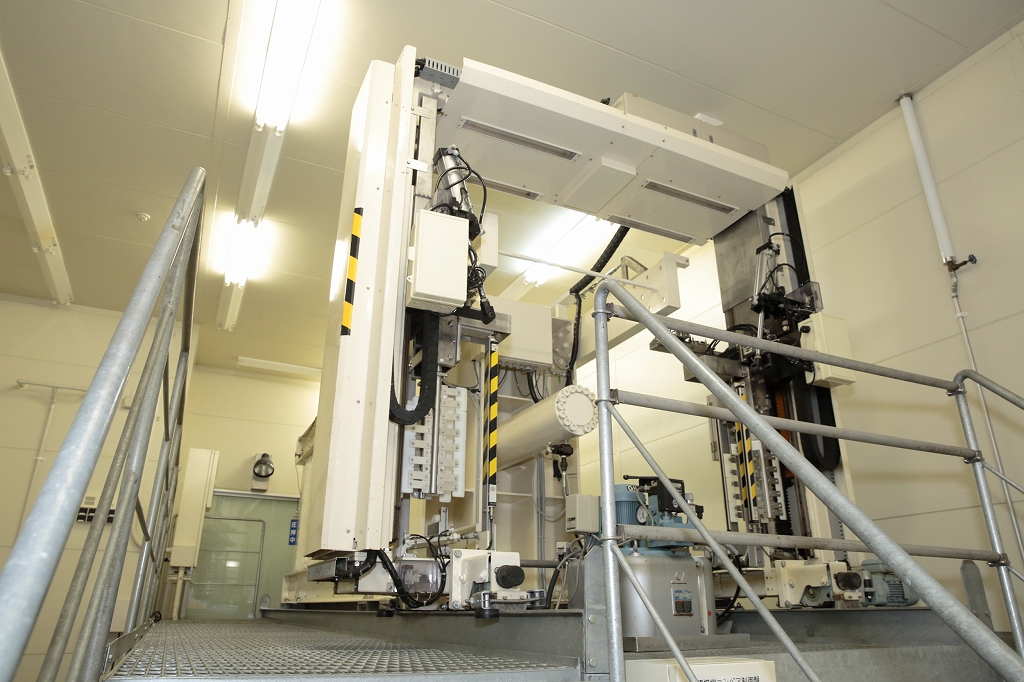 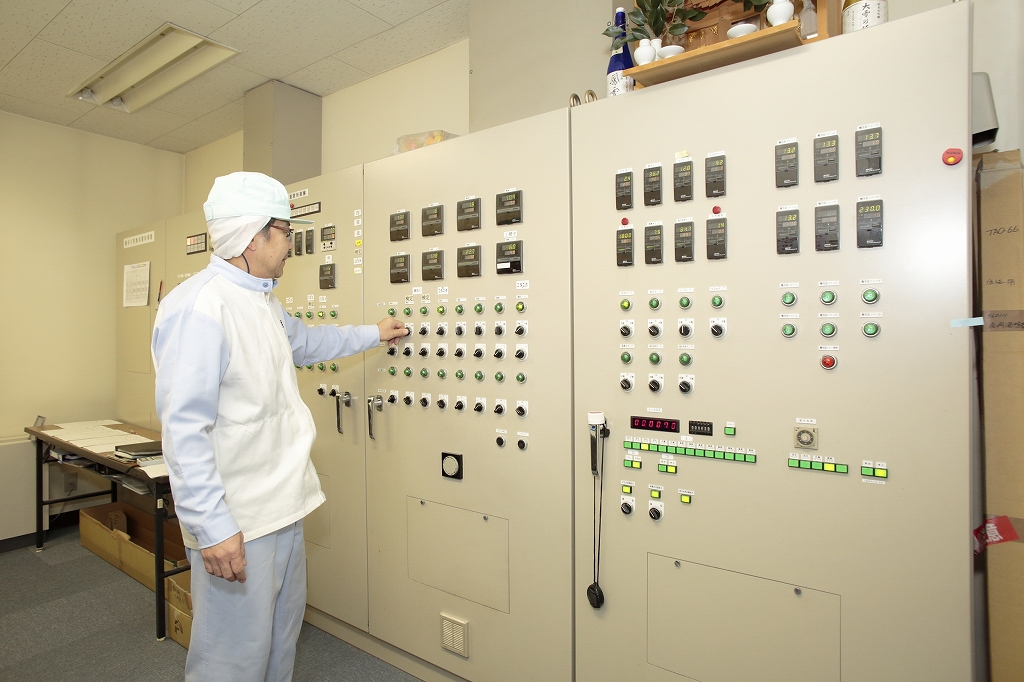 The data from each tank is managed centrally.

The Asahikawa factory is the only fully automated Japanese sake brewery of the Oenon group. One other feature of “Taisetsu-no-Kura” is that production is limited to 100% Hokkaido-produced rice.
“If we are calling it ‘local Hokkaido sake,’ then we believe it’s our duty to use Hokkaido rice.” At the end of the tour, Mizuguchi showed us to a brick-built building in the factory grounds. Inside were rows of wooden barrels filled with maturing shochu. Despite being fully automated, the factory still preserves its old structures. 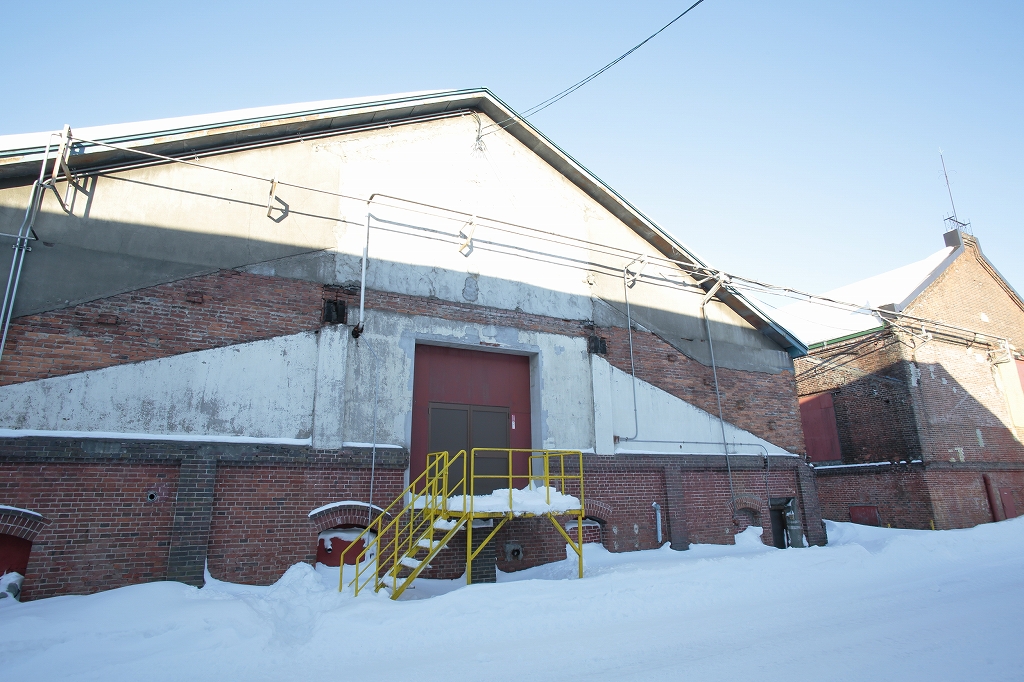 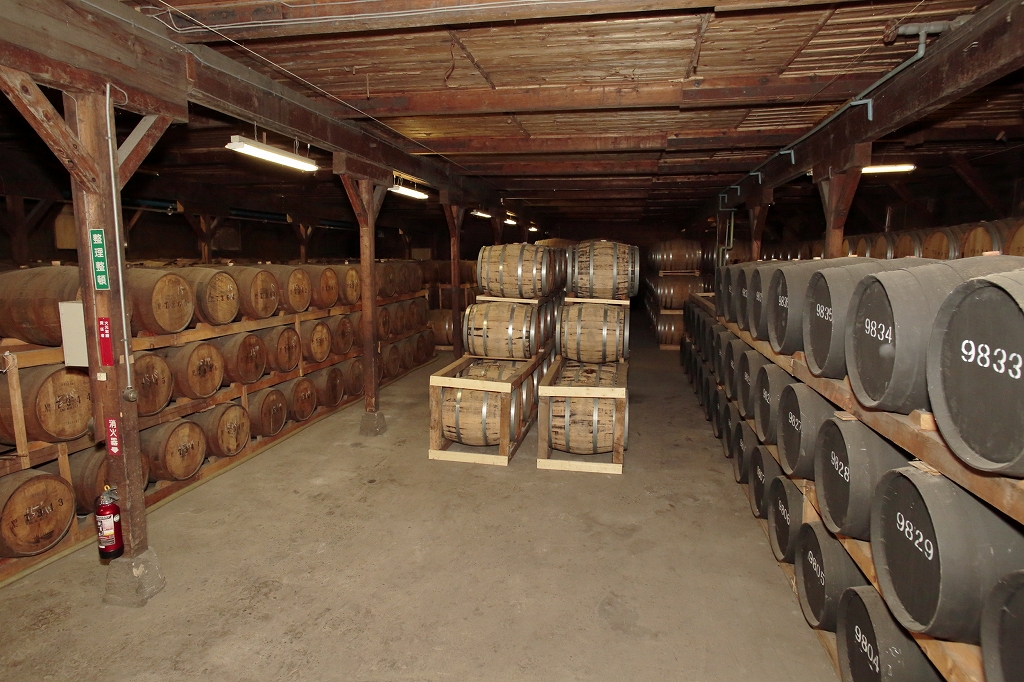 Like a wine cellar, but the barrels are filled with shochu.

In the past, it was the custom for Asahikawa’s sake producers to hold “brewery tours” and open their breweries to each other to share techniques. That custom still continues today, with rice producers organizing “sake-rice group” meetings in which members from the three breweries take part. Together, they exchange information and take part in hands-on rice planting and harvesting activities.

There are movements among the locals too, to support Asahikawa’s sake brewing industry. Every year since 2010, the Asahikawa Liquor Retail Union has hosted the “Local Sake Fair in Asahikawa” in a bid to restore awareness of local sake. In 2013, sake wholesalers and retailers persuaded the City Council to establish a “local sake toast ordinance” to encourage people to choose local sake when raising a toast at official engagements. Choosing locals sake helps support industry and employment in the region.