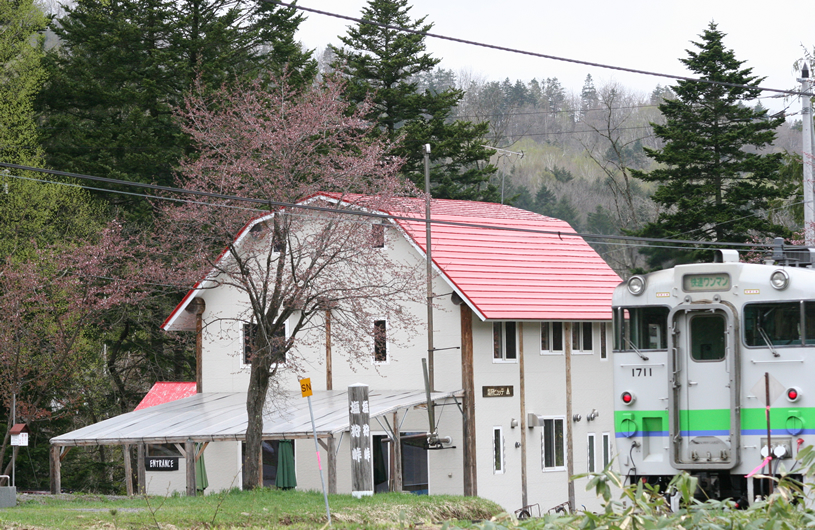 In the town of Wassamu near JR Shiokari Station is an accommodation facility known to avid travelers. It is here, at this youth hostel – which has only been open for five years – that talk of the railway begins with those visiting Shiokari Pass.
Words by Taniguchi Masaharu
Translation by Xene Inc.

In the hope of crossing Shiokari Pass by railway

If you get off the train at Shiokari Station, you'll see Shiokari Hütte and a sign that guides the way to the Shiokari Pass Memorial Hall. Located at the foot of Mt. Wassamu, Shiokari Station is like a scene from a picture book, surrounded by nothing but forest.
Goda Toshiyuki was born in Wassamu – the 4th generation since his great-grandfather moved here from Kagawa Prefecture. After studying architecture at high school and university, Goda worked for companies in Tokyo, Canada, Osaka and the like, before returning home to Wassamu with his Osaka-born wife Yasuyo. In the spring of 2013, the couple opened Shiokari Hütte. Like Toshiyuki, Yasuyo loves the mountains and traveling, and the mountain getaway owned and managed by the couple was named Hütte, meaning "mountain lodge" in German. 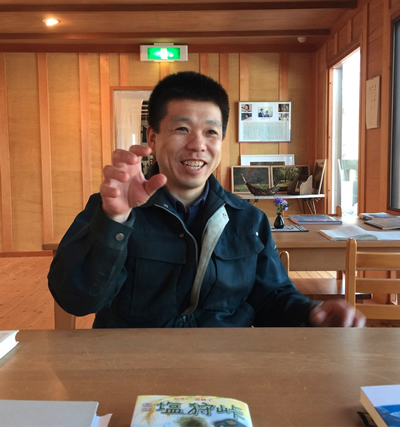 On the hill, immediately behind Shiokari Station is Shiokari Pass Memorial Hall – a literary museum established in the spring of 1999 in a reproduction of the home of writer Miura Ayako, who created a number of masterpieces from her base in Asahikawa. By the railway line next to Shiokari Hütte is a monument dedicated to Nagano Masao, a Christian who lost his life near here while trying to stop a railway carriage from rolling back down the hill – an actual incident that occurred here on February 28, 1909, which became the model for Miura’s novel Shiokari Pass.

What Shiokari Hütte aims for

From Shiokari Station, I took the local train and headed toward the next stop, Wassamu Station. The location where Nagano Masao lost his life carrying out his duties is three or four kilometers from the monument on the Wassamu side. When the train passed the place that could be thought to have been the location, I was suddenly struck with a sense of solemnity.
I turned back at Wassamu and returned to Asahikawa by limited express train. Since the speed was such that I hardly noticed the incline, it was difficult to imagine how Nagano Masao’s steam locomotive had climbed the pass.

The Soya Main Line was at the core of a variety of businesses in this region. The location of the Shiokari signals became Shiokari Station in 1924. Currently, JR Hokkaido claims that "it is difficult to independently maintain" the Soya Main Line between Nayoro and Wakkanai. Municipalities along the line have formed a council and have begun to discuss measures with the company. Amid all this, when drawing up images of the structure of Hokkaido’s near future, the Godas’ Shiokari Hütte looks like a symbolic location from which to once again open up and increase the value of the region with the railway as its core.