Everything started with the Gaertner farm 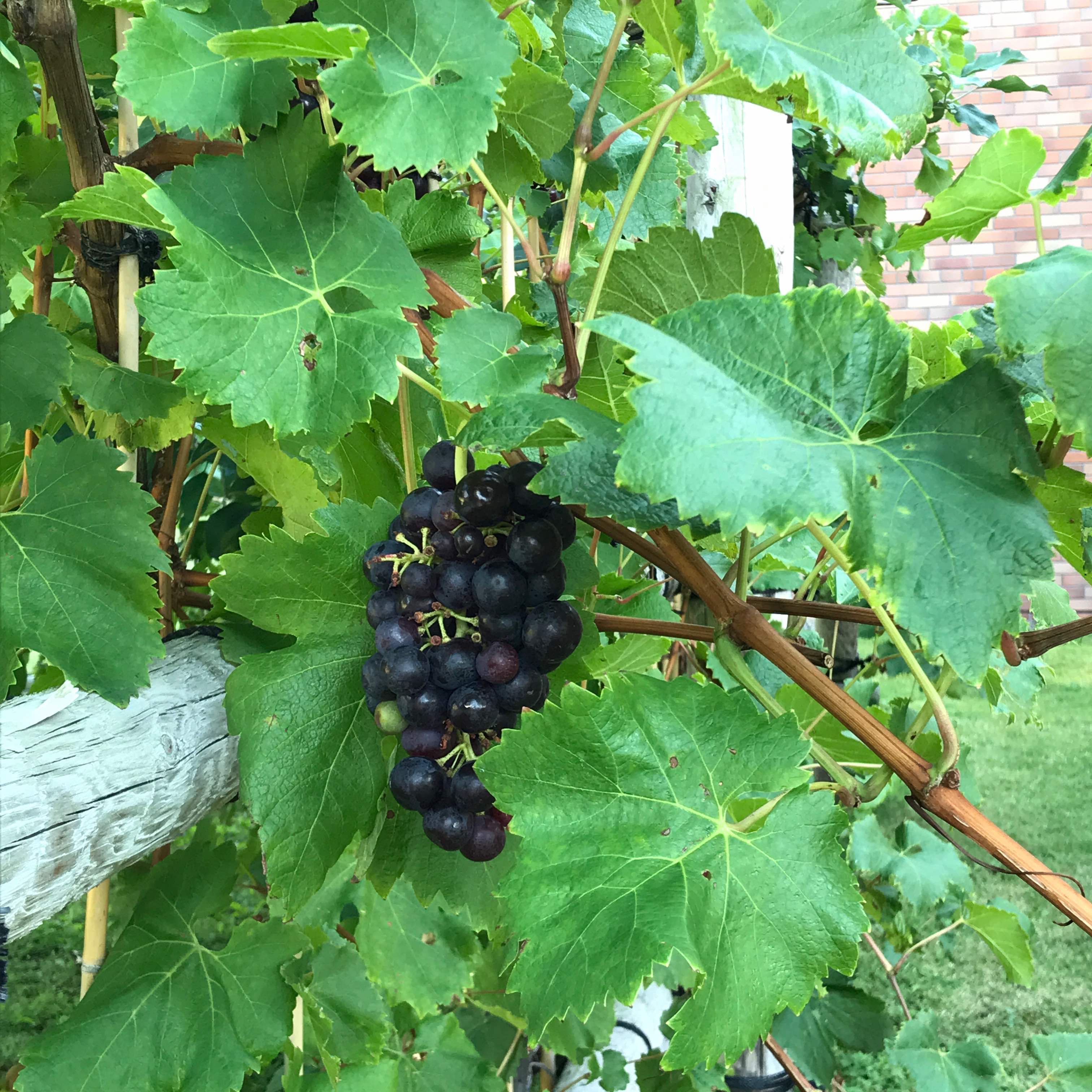 Gaertner grapes are grown at the Nanae Historical Museum.

In the Western agriculture of Hokkaido, there is a fascinating history that came before Sapporo Agricultural College. The setting is Nanae Town, which is next to Hakodate.
Words & Photographs by Taniguchi Masaharu
Translation by Xene Inc.

Where Western agriculture originated in Japan

Nanae Town is often introduced as "the place where Western agriculture originated in Japan." That's because Reinhord Gaertner, a Prussian (German) merchant, started a farm here in the closing days of the Tokugawa shogunate and practiced Prussian agriculture.
Gaertner brought with him from Prussia agricultural equipment, wheat and cabbage seeds, and apples, grapes, cherries and other fruits that were not found in Japan, hired Japanese peasants, and engaged in Prussian-style agriculture. In 1869, he entered into a contract with Enomoto Takeaki's Republic of Ezo to lease 10 million square meters of land for 99 years. Later a new government canceled this contract, but had the Ezo administration continued, central Nanae Town would have been Germany until 1968.
What kind of person was Reinhord Gaertner?

Let's try to put in order the circumstances surrounding the Gaertner farm.
It started with the Perry armada's arrival in Hakodate (1854). Pressed by the reality of Russia's impending southward expansion, the Edo shogunate opened ports in Shimoda and Hakodate, and a magistrate's office in Hakodate. In 1858, Japan signed commercial treaties with the U.S., Russia, Italy, the Netherlands and France. A treaty with Prussia was signed in 1861. It went into effect at the beginning of 1863.

In "The History of Hakodate," there is a list of foreign residents from the closing days of the Tokugawa shogunate, and in the trade division in the 1862 column, the name of R. Gaertner's younger brother, C. Gaertner, is listed. The younger brother went as a trader, but he became the resident Prussian vice-consul in Hakodate.

The shogunate had opened a magistrate's office, and in 1866 Sugiura Makoto became magistrate. Around that time R. Gaertner followed his younger brother to Hakodate.
Sugiura and others thought that Western agriculture was needed to move forward with pioneering the cold inland regions of Hokkaido. He consulted with the Gaertner brothers and it was decided that the older brother would cultivate land in Hakodate city on a trial basis.

However, the situation was rapidly developing. The bakufu fell with the Boshin War, and the new Meiji government established Hakodate-fu in Ezo. The Hakodate magistrate's office was reorganized into an administrative body called Hakodate Court. R. Gaertner negotiated with Hakodate Court and entered into a contract to cultivate new land in earnest.

Nevertheless, the situation would change greatly once again. Enomoto Takeaki, who led the Old Bakufu Deserters' Army, formed an armada in the ocean off Shinagawa, headed north and landed in what is today Mori. Before long he took control of all of southern Hokkaido and the Hakodate government was born. Enomoto became the president and Nagai Genba became the magistrate of Hakodate.

The Gaertner brothers continued negotiating with Nagai Genba and the parties entered into a contract in 1869. The contract was for the aforementioned leasing of 10 million square meters of land for 99 years and engaging in agricultural production while teaching Western agriculture to Japanese peasants.

However, sure enough, three months later, the situation was overturned again.
The former Edo bakufu army, which continued to be counterattacked by the new government's army, surrendered. The seven-month Battle of Hakodate ended.
The new government inaugurated the Hokkaido Development Bureau as an agency that would administer the pioneering of Hokkaido.

R. Gaertner, whose contract counterparty had changed again and again, firmly asserted his rights secured with the contract under the framework of international law. Left alone it would have become a diplomatic issue with a major European power.
As the result of negotiations, the government paid R. Gaertner compensation of the enormous sum of $62,500 and allowed him to return to his country. In today's money the amount was worth 1.2 billion yen ($11 million). Nanae Historical Museum curator Yamada Hisashi says that considering expenses, the profit would not have been that much. Gaertner returned to Germany in 1872, and his farm became the heartland of the Hokkaido Development Bureau's Nanae agricultural agency. There is almost nothing known about what happened to R. Gaertner after he returned to Germany. 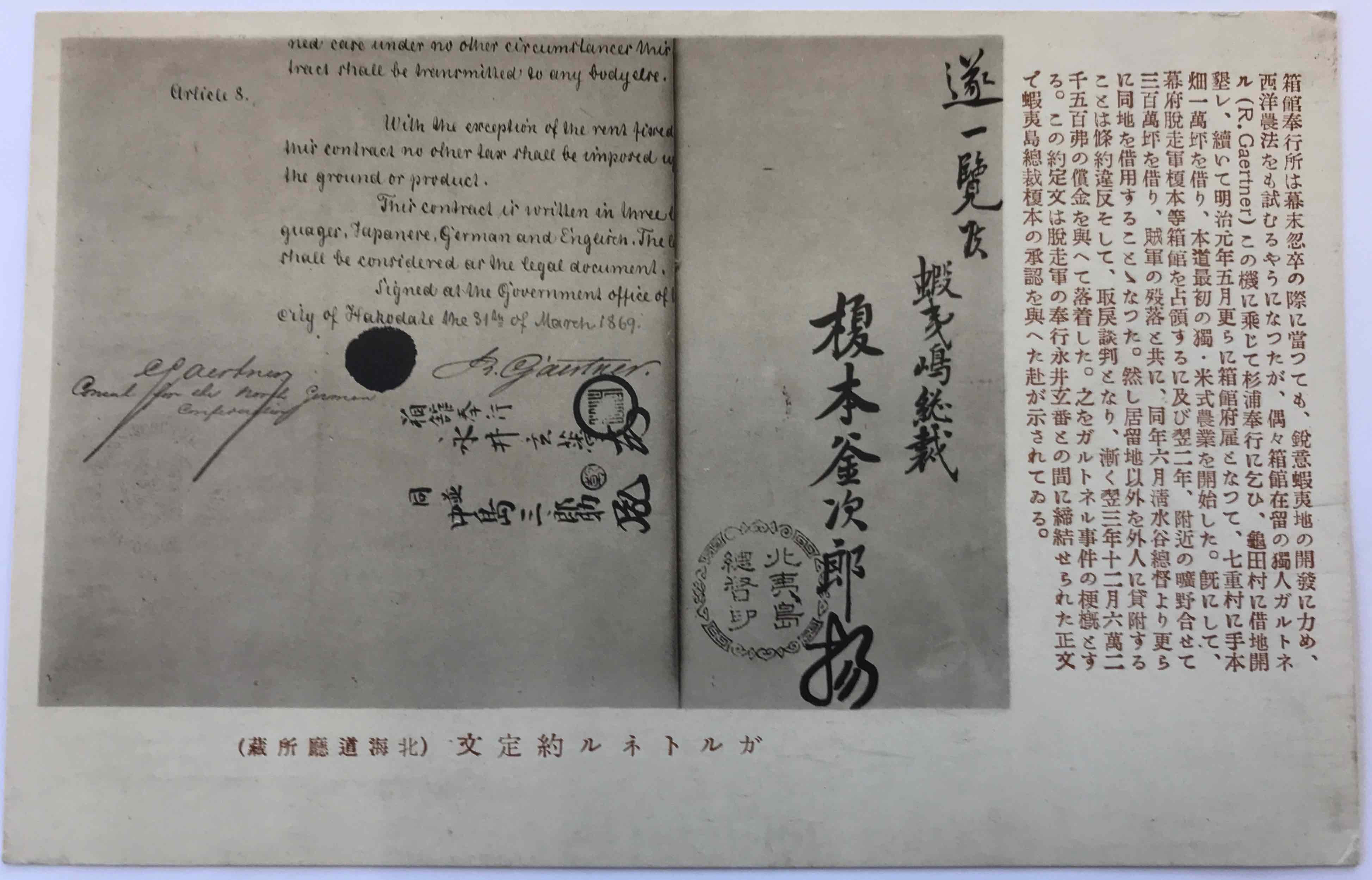 "The Gaertner agreement text" made into a postcard (from "Collection of Hokkaido Historical Material Postcards Volume 2," owned by the Hokkaido Prefectural Library)