The Backbone of Japanese Manufacturing 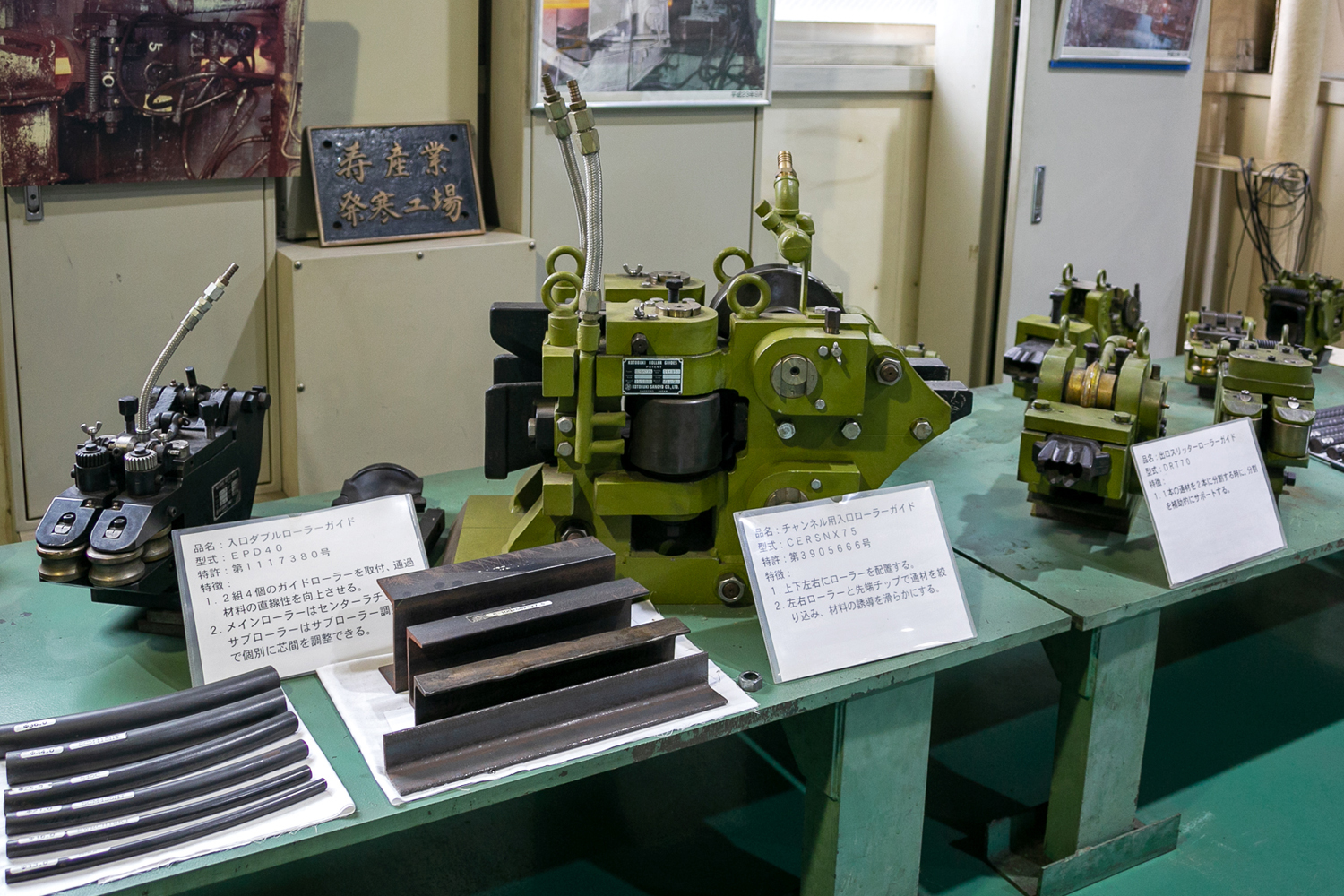 The roller guide manufactured by Kotobuki Sangyo is a device that guides high-temperature iron from the heating furnace to the rolling mill, a machine with two pairs of rolls that form the iron into bars or other shapes when manufacturing rolled steel. Almost all of their products are custom-made and require a high level of developmental skills and technology.

There is a company that continues to provide support for Japanese manufacturing just east of the Sosei River in Sapporo, the birthplace of Hokkaido's industry.
Words by Ishida Mie
Photographs by Kurose Michio

The Founder Sharing Adoration with the Customer

Kotobuki Sangyo, headquartered in Chuo-ku, Sapporo, is a special parts manufacturer that mainly manufactures and distributes roller guides. They have close to an 80% share of the domestic roller guide market.
The current President Suzuki Shunichiro is the grandson of the late founder Suzuki. Shunya When the head office was renovated in 2019, an office for the founder was set up next to the president's office. Let's take a look at what kind of person Suzuki Shunya was.

In 1945, as Japan was heading towards the final stages of World War II, Shunya was working at the Tokyo branch of a machine factory in Sapporo. When the war began to ravage Tokyo, he returned to Sapporo with his family, and went to work every week at Nippon Steel Corporation's Wanishi Works (now Nippon Steel Corporation's Muroran Works), a major business partner, and soon became a person that many people relied on.

At the end of the war, the machine factory where he worked decided to close down. When he went to Muroran to say his farewells, officials at Wanishi Works told him, "We'll open a trading account for you, and you can start your own company." Thus, in 1951, with one of the largest steel mills in Japan as a client, Shunya and four others established a small company called Kotobuki Sangyo.

Shunya became the president of the company and still went to Muroran twice a week to take orders for machine repairs and other work. He always delivered the products on time under even the most difficult conditions. Shunya was willing to comfortably take on jobs that big companies refused, and before long Kotobuki Sangyo established a reputation as a reliable company. 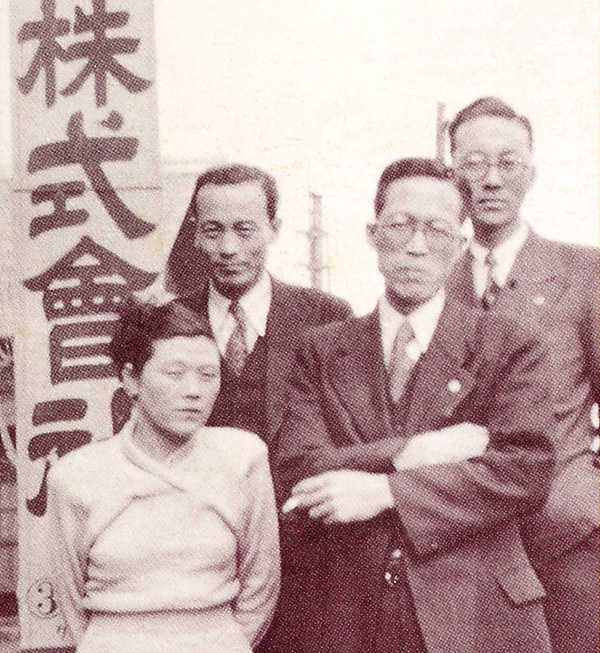 Suzuki Shunya in the foreground on the right in March 1952, the year after the company was founded (Photo courtesy of Kotobuki Sangyo Co., Ltd.) 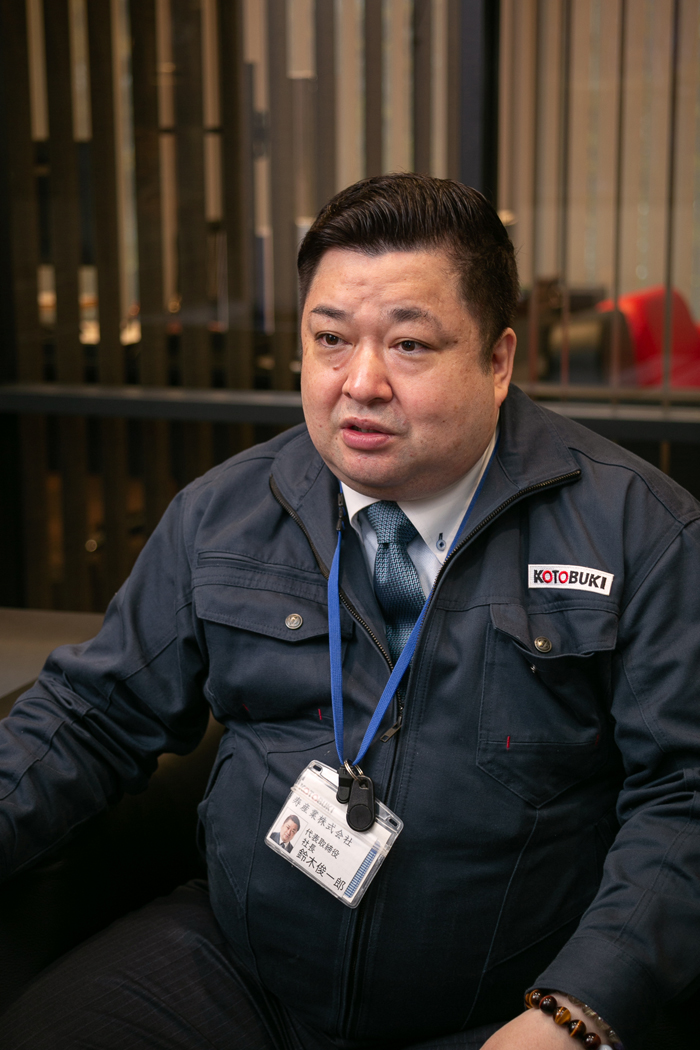 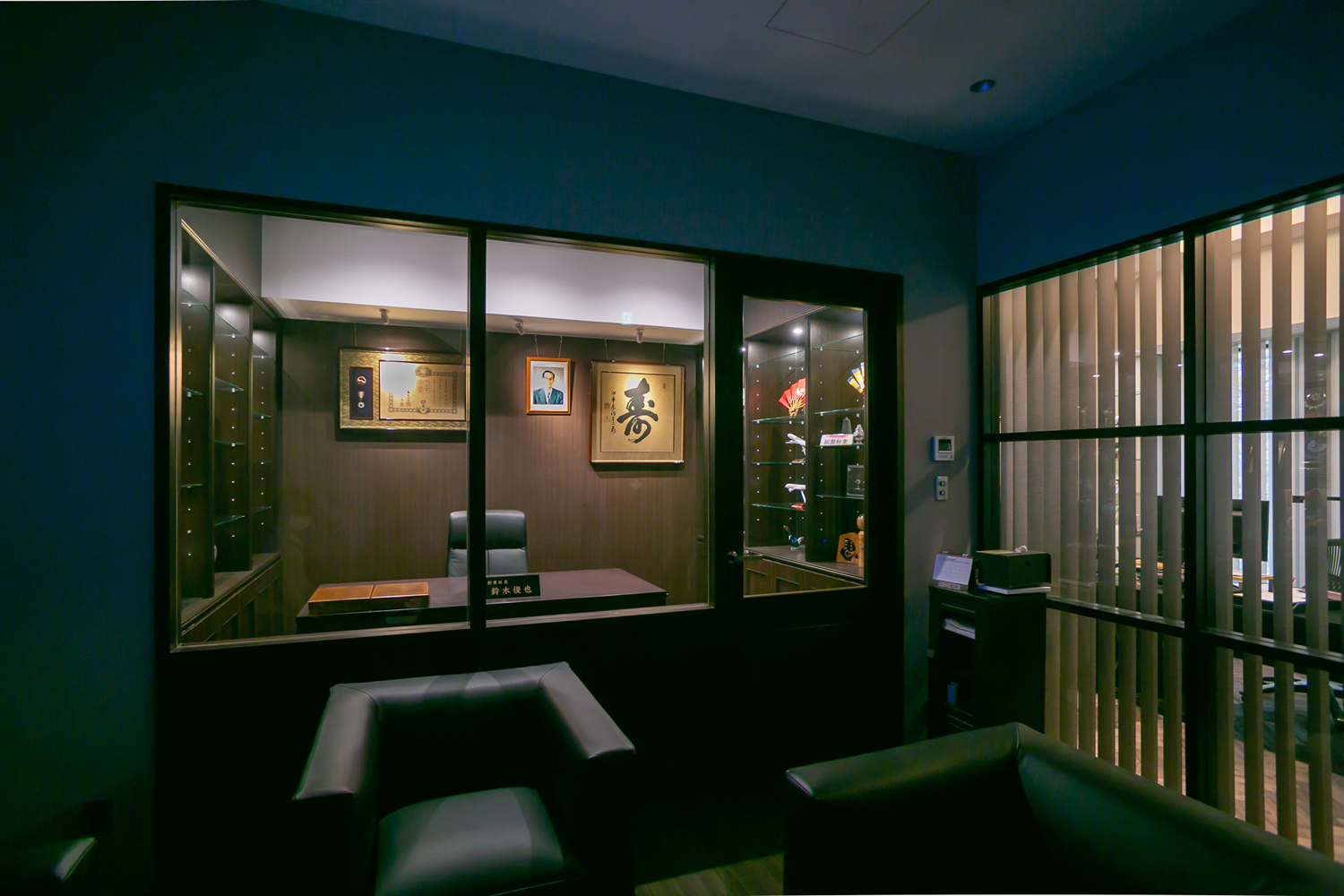 Founder’s Office next to the President's Office

In the 1960s, Shunya's eldest son and the second president of the company, Suzuki Toshiyuki (current chairman), joined the company, and Kotobuki Sangyo began a period of major development. It all started in 1963, when the Muroran Works asked them to develop a certain machine.

At that time, the Muroran Works was to make new rolled stainless steel products, but they soon realized that the conventional method of holding down steel in its place through casting would cause scratches and burn marks on the soft stainless steel. At that time, roller guides were only imported from Sweden, which made them expensive and did not allow for detailed specification changes. Under these difficult circumstances, Kotobuki was chosen to launch a joint development project for a new roller guide.

The biggest obstacle at this time was to create a product with completely original technology so as not to infringe on the patents of the Swedish products. After a thorough analysis of patent specifications and a series of discussions and improvements, the first domestically produced roller guide was completed in 1963. The results were excellent, and Muroran Works was able to successfully produce rolled stainless steel without any problems.

The person in charge at Muroran Works at the time suggested that Kotobuki Sangyo obtain a utility model since they had jointly developed it, and even gave them permission to sell it to other companies since the steel industry was going through tough times. The trust they had built up over the years had finally taken shape. This is how Kotobuki's roller guides came to be widely used in the domestic steel industry.

Toshiyuki, who was in charge of sales at the time, expanded sales channels throughout Japan, and in 1982, Kotobuki Sangyo established its own factory and started doing business with steel mills overseas.

President Suzuki talks about one of the reasons for the company's rapid growth.
“We manufacture roller guides, but we are not a company that sells machines. Our job is to solve the problems of our customers, and machines are one way of doing so. My grandfather was a man who never said the word ‘impossible’. My father took on his legacy and has traveled the world to put these ideas into practice.” 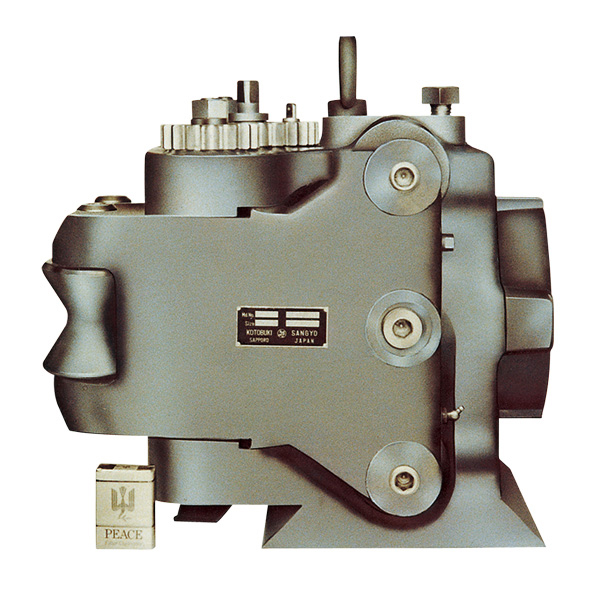 Roller guide for rolling at the time of development in 1965 (Photo courtesy of Kotobuki Sangyo Co., Ltd.)

President Suzuki joined Kotobuki Sangyo in 2001 and was appointed President and CEO in 2018. Before joining the company, he worked for a steel manufacturer for three years in the rolling operations department of a steel mill.

He learned the concept of placing importance on the actual worksite here. He has been putting his own mission into practice creating a work environment conducive to the workers at the actual worksite, following in the footsteps of his grandfather, who started the business from scratch, and his father, who expanded the company's base. President Suzuki advocates that, "The success of the company belongs to the employees, and the failures of the company are the responsibility of the president."

Currently, Kotobuki Sangyo has a roller guide-focused steel-related sector and an environment-related sector. They are also setting their sights on new areas. The number of employees has grown from 4 to around 70, and the scope of business has expanded greatly. However, the origins of Kotobuki Sangyo remain the same.

When a customer was going through personnel changes, they told their new employee to “Call Kotobuki if you have any problems.” President Suzuki says there is no greater honor than this. 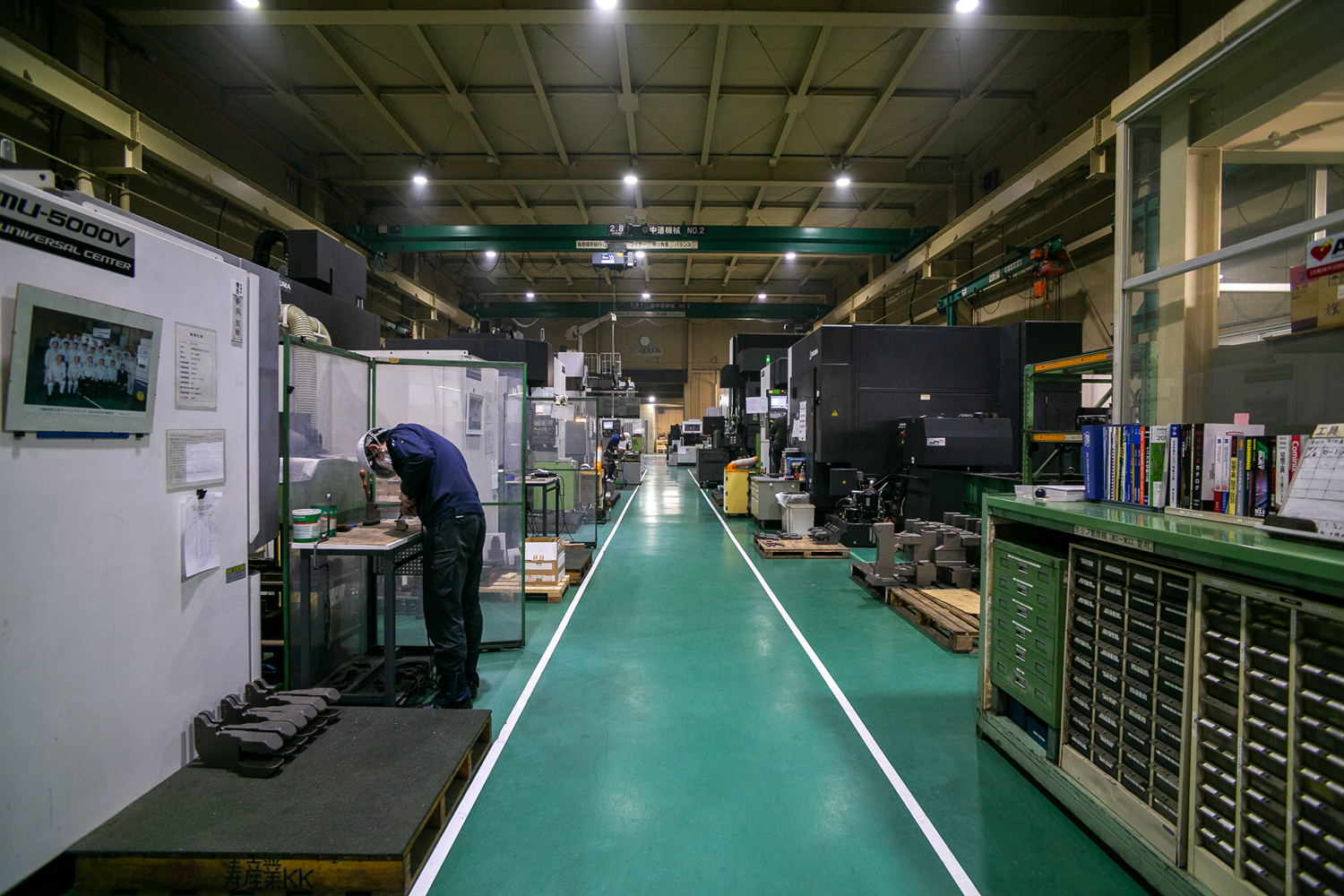 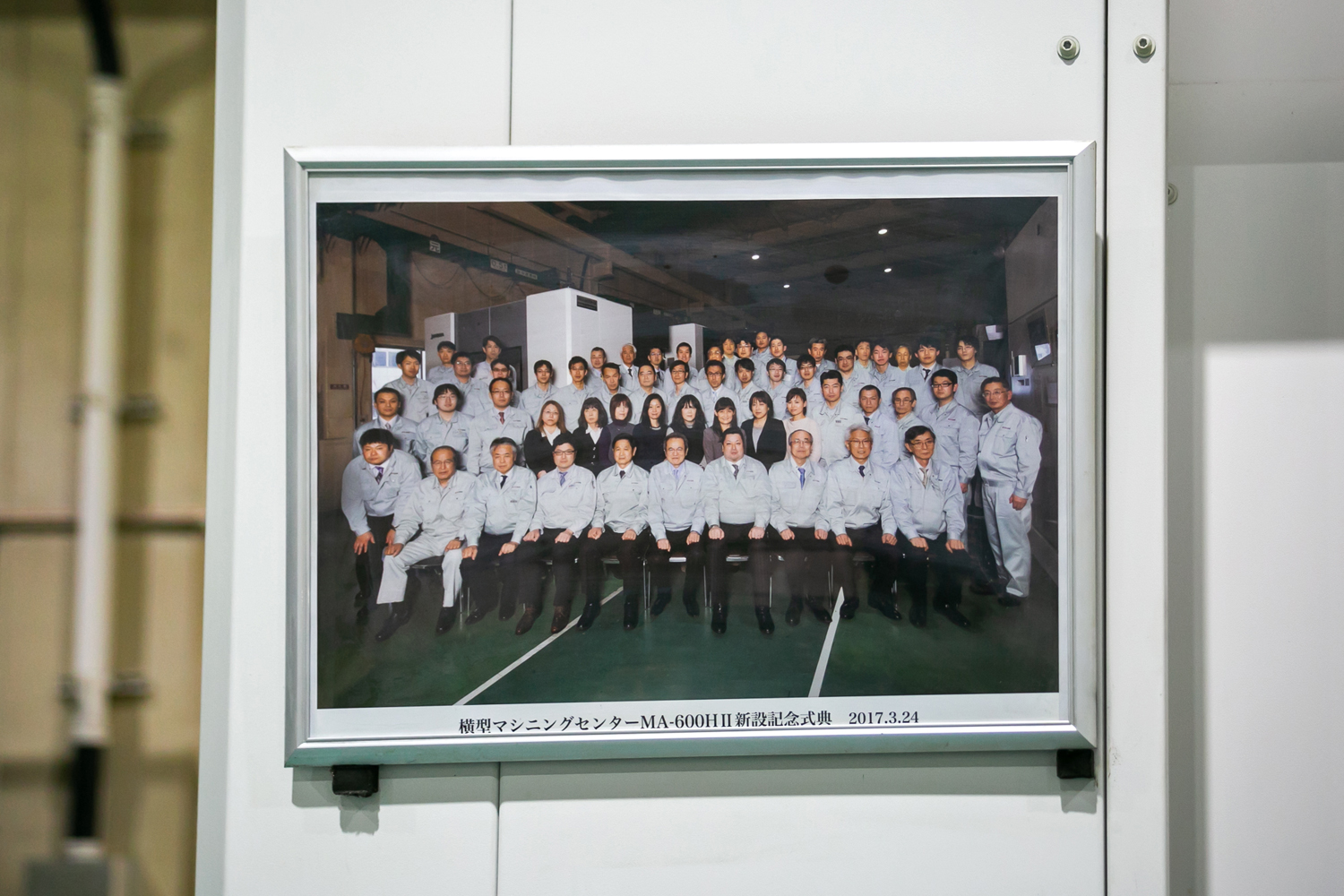 Commemorative photos are taken when large machines are installed. 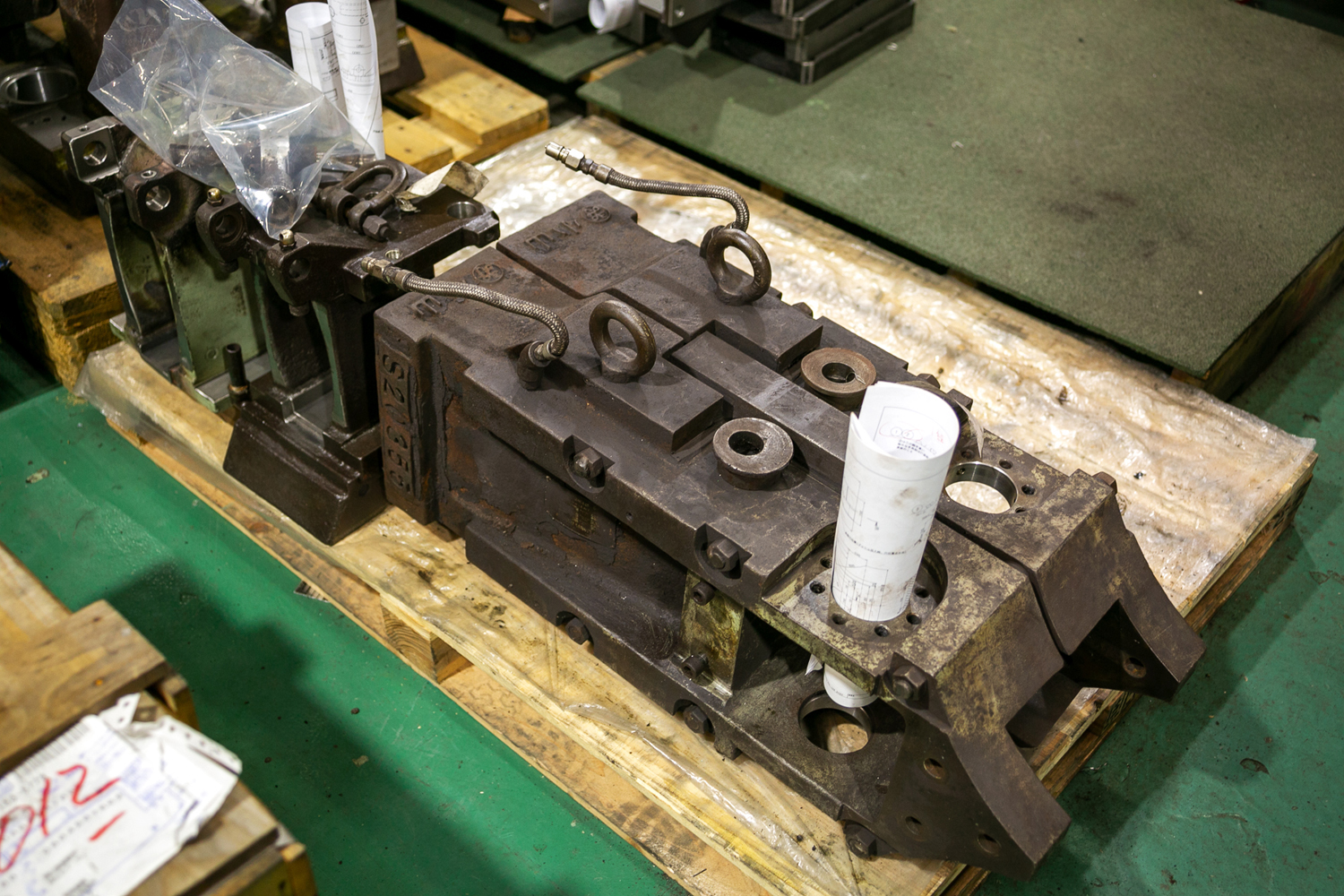 Requests for repairs are constantly coming in from steel mills all over Japan.