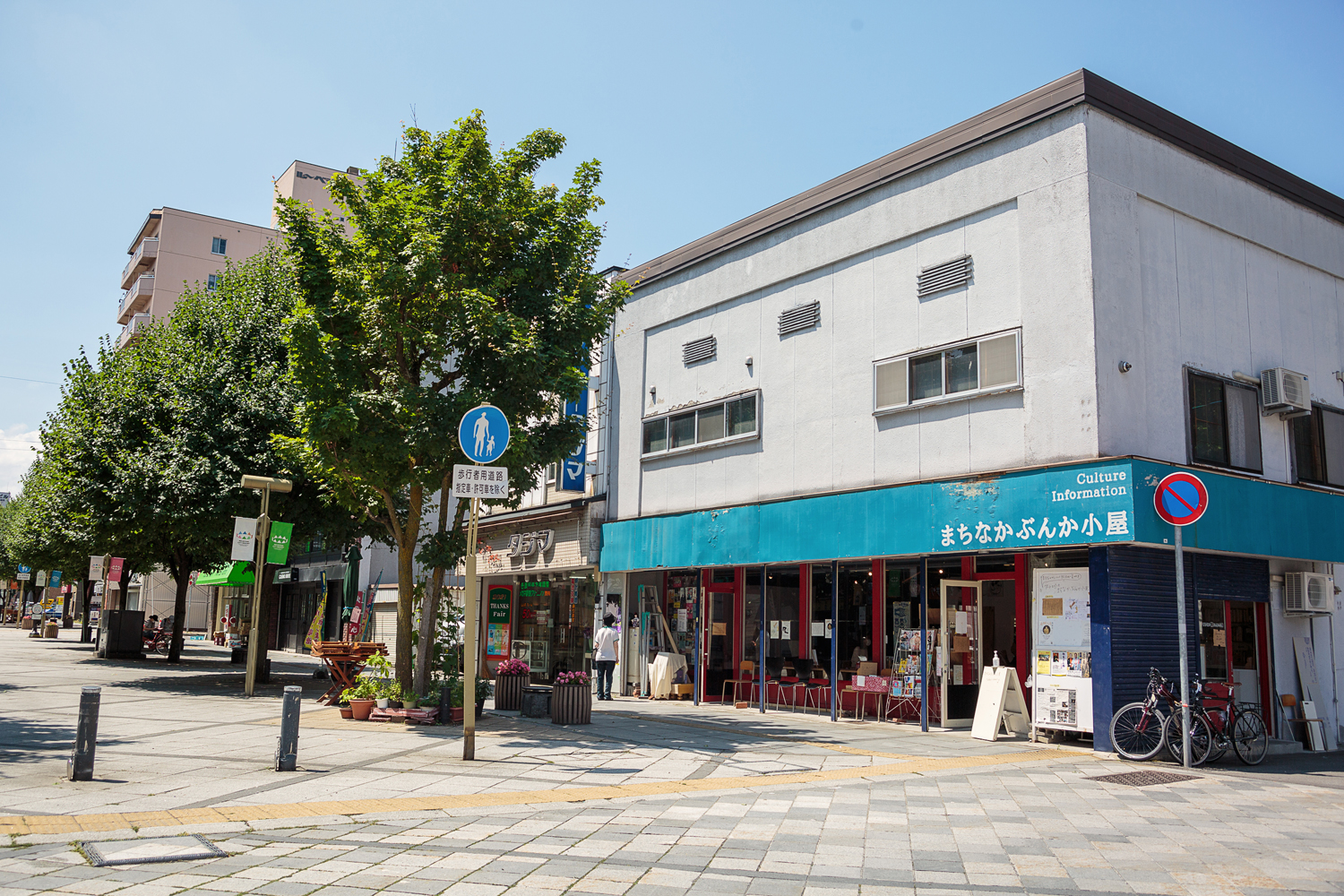 The Machinaka Bunkagoya is located in Asahikawa's Kaimono Koen. What great energy is hidden in this small building?
Words by Inoue Yumi
Photographs by Kurose Michio
Translation by Xene Inc.

Established by Asahikawa and operated by a citizens' group

The Machinaka Bunkagoya is a multi-purpose space operated by a voluntary citizens' group. There were 383 events and workshops held here in 2019, with a total of 6,895 participants. Although the number of events has been reduced to one-third due to the COVID-19 pandemic, it still functions as a place for citizens to interact.

How did the Machinaka Bunkagoya originate?
The managing office director Arimura Yukimori explains, "The Machinaka Bunkagoya was opened in August 2013 by renovating a vacant store, as part of Asahikawa's project to revitalize the city center."
Arimura was hired as a staff member from a private company, and was involved in operating Machinaka Bunkagoya. However, it was closed after eight months when the city's project ended. In May 2014, Arimura and others formed a citizen-led council to negotiate with the city and restarted the project, based on the idea that it would be a waste to give up on it. 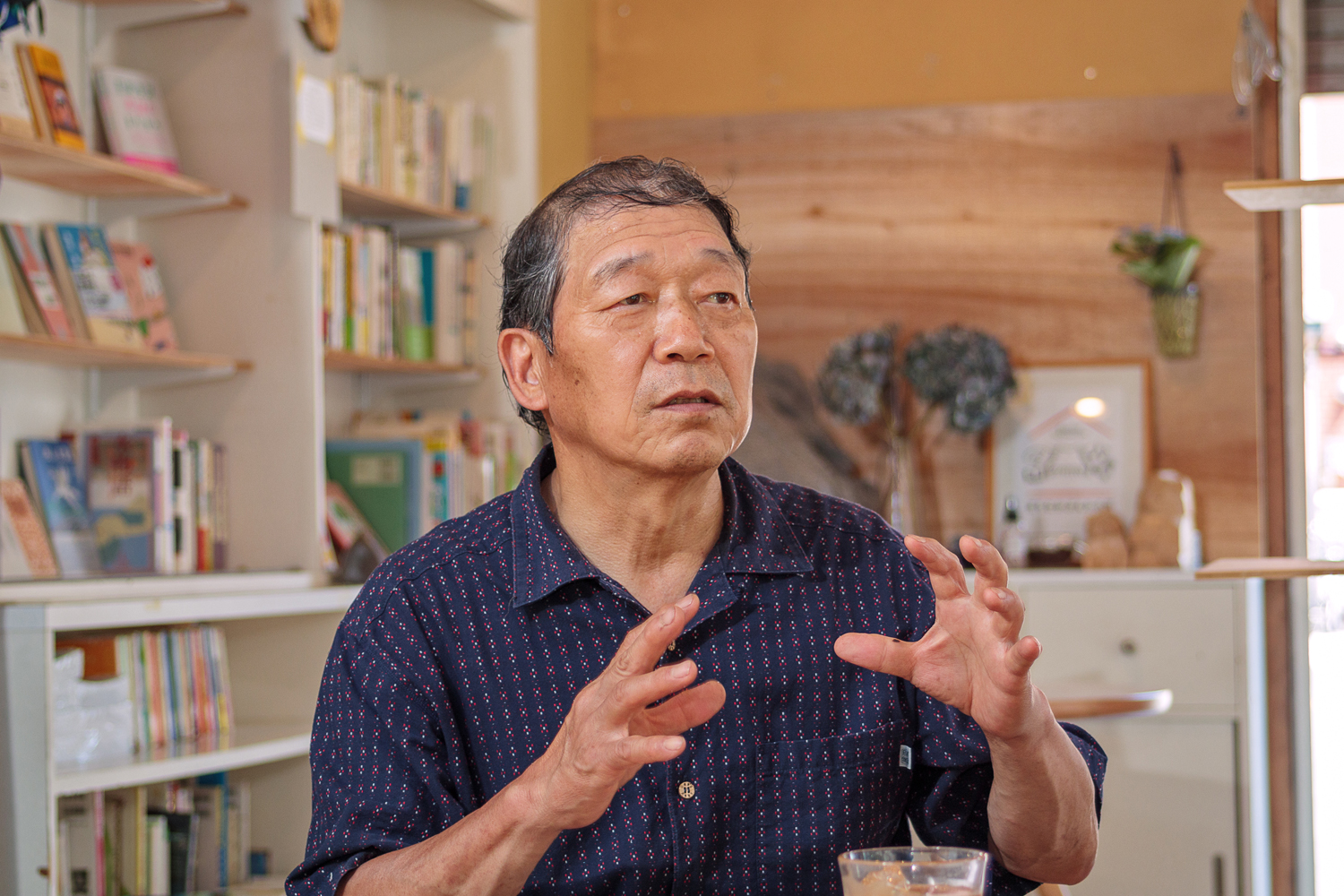 The operation is supported by the Machinaka Bunka Promotion Council, which is organized by a local store association, members of cultural organizations in the city, users of the Machinaka Bunkagoya, and more. At first there were 50 members, but now the number has grown to 200. In addition to subsidies from Asahikawa to cover the rent and utility costs, the rest of the funding comes from the membership fees and the profits from the projects.

Takeda Kaoru joined the staff in October 2015, a year and a half after the re-launch. 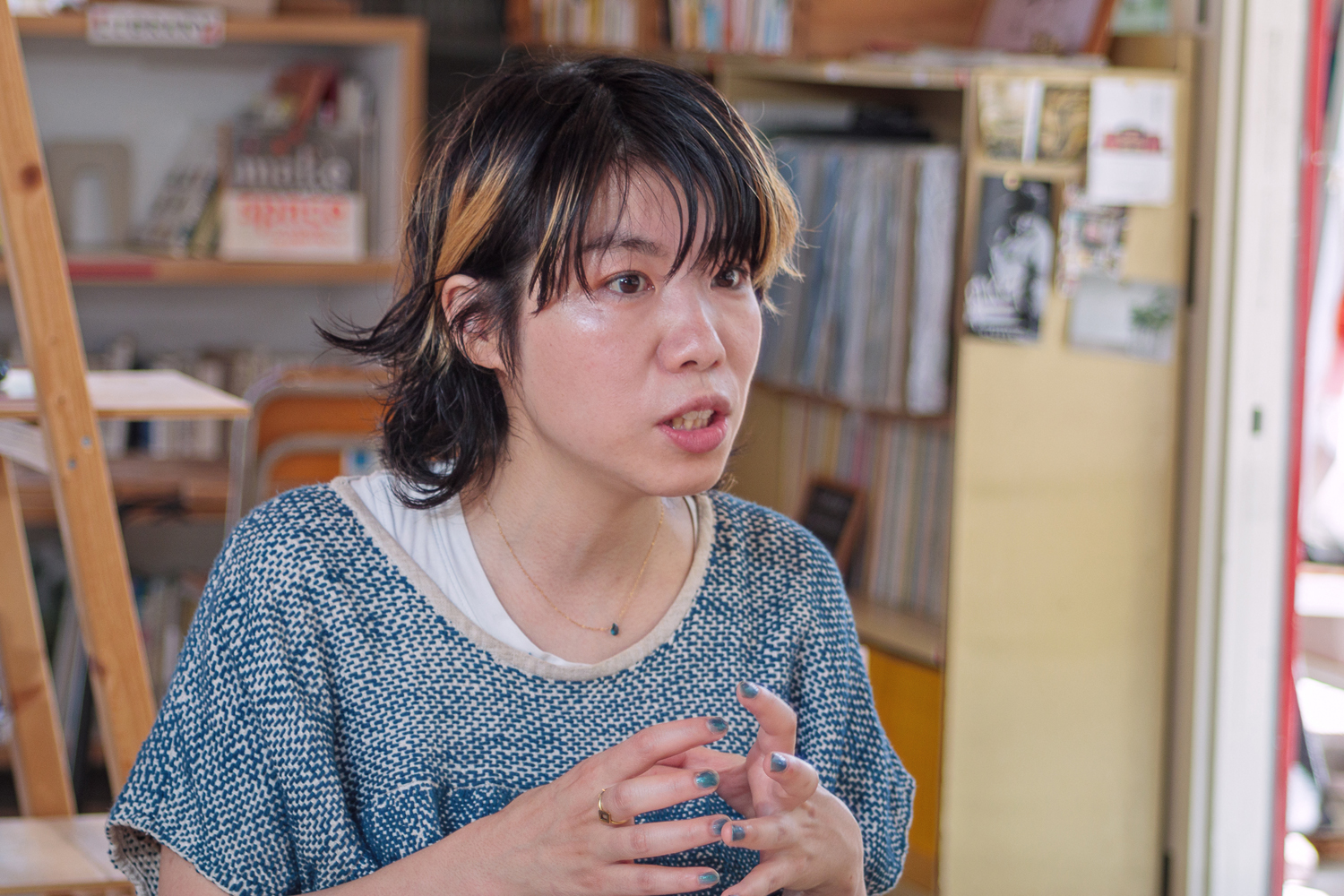 Takeda Kaoru is from Tokyo 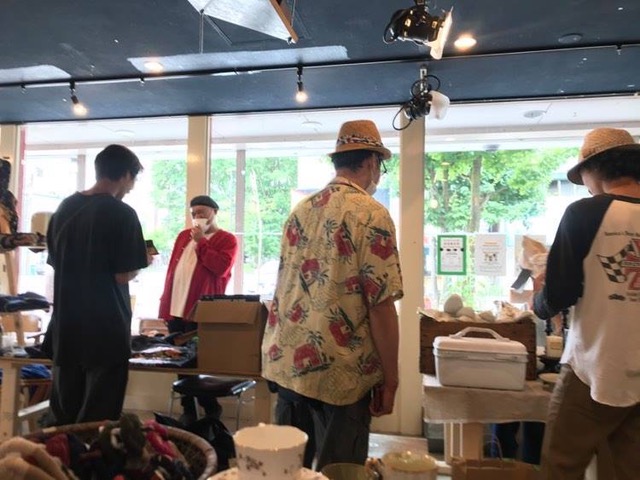 A place to recycle objects and feelings

Machinaka Bunkagoya also started selling goods in 2016, because some people said, “It's easier for people to come inside without a purpose when you're selling things.”
For some reason, people in the community began to donate their unwanted books, clothes, and miscellaneous goods, so through a process of trial and error, Machinaka Bunkagoya remakes and sells used clothes and holds bazaars to help with operating expenses.
“The books on the shelves can be bought by anyone and the price of their choice,” said Takeda.

“I would like to see the Bunkagoya become a transfer point for usable items that can be passed on to another person. It would be nice to have such a recycling system,” says Takeda. 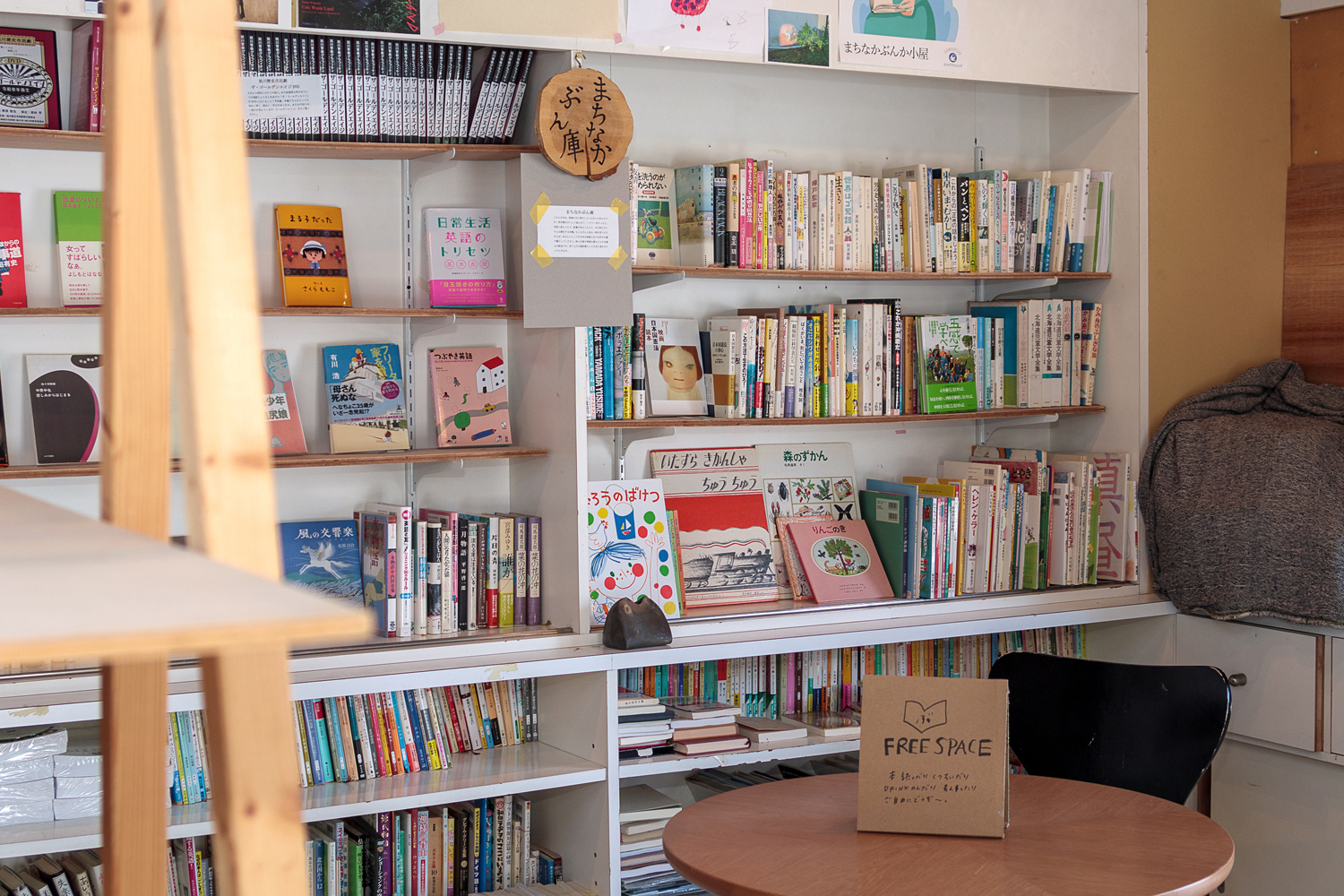 Visitors purchase books they are interested in at a price they decide, and proceeds are used to cover operating expenses.

Making art fans over a long period of time

The Bunkagoya also has events that are free to attend.
One such event is a painting bar. It was started by Yoshika Nakajima, an illustrator living in Asahikawa.
She says, “After coming here a few times, I want to contribute to the Machinaka Bunkagoya. I felt there were things everyone could do together here.” 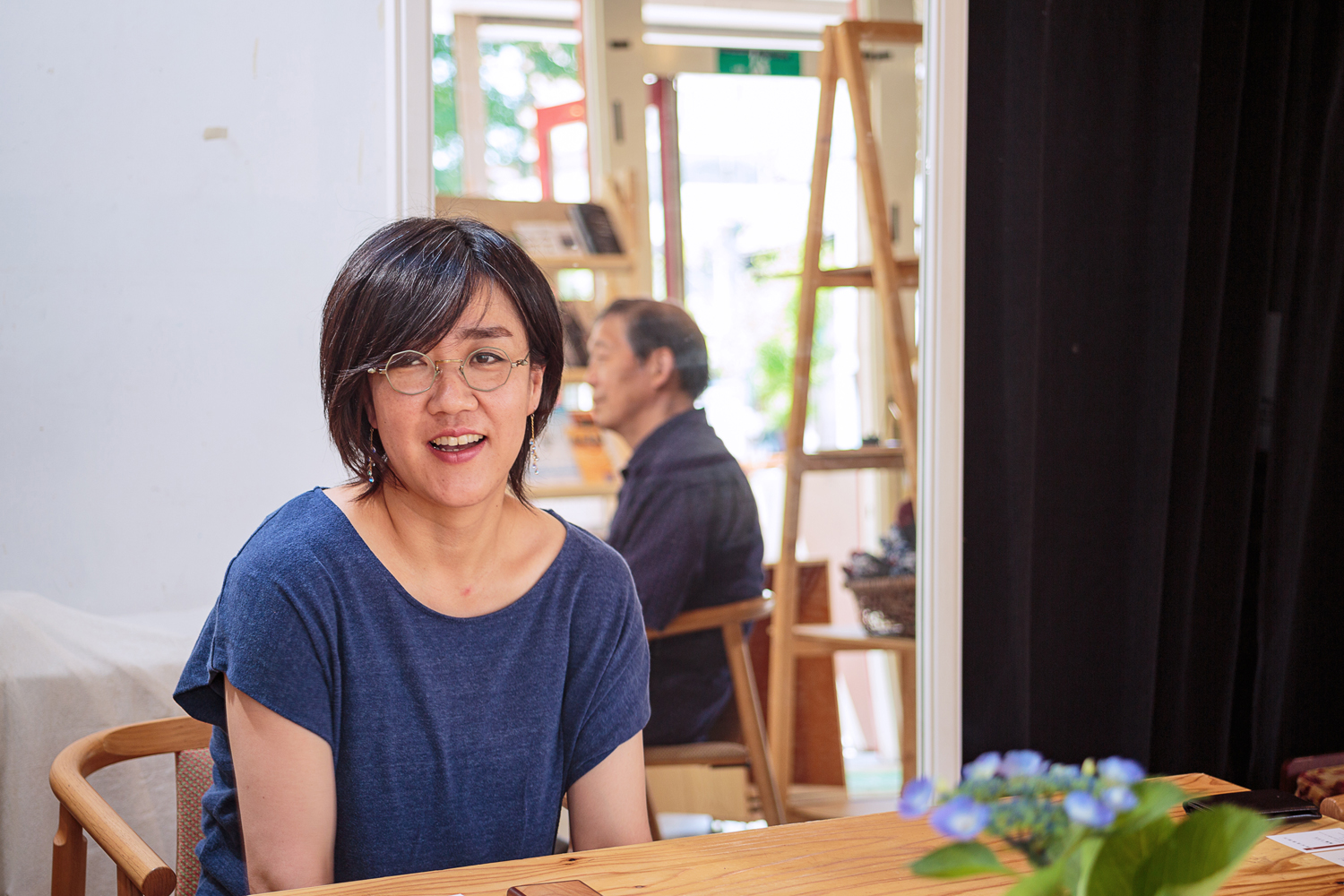 Nakajima's idea was to create a place to hang out through art.
“I wanted to create a place where people could interact with each other while enjoying their own creativity,” she says.
This event is held on the second and fourth Tuesdays of the month, with no reservation required and free participation. Elementary school students who come here with their mothers and people who just happened to be passing by enjoy making things around the same table. Some people weave mascots out of yarn, while others paste yarn onto paper to create Van Gogh-style paintings. Everyone enjoys lively conversation while viewing all the works of art. 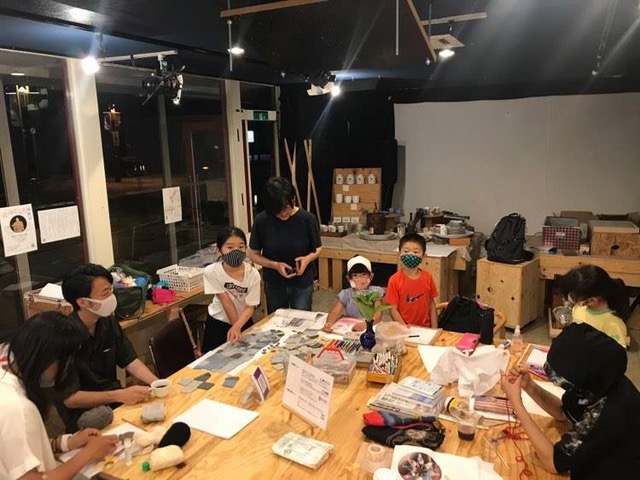 Difficulties due to COVID-19

The Bunkagoya has taken root in the community, but it still faces many challenges. The number of events has decreased dramatically since last year due to COVID-19. Profits have also continued to decline.

The Machinaka Bunkagoya is taking on new challenges starting with what they can do. Last year, they increased the number of sinks, installed hand washing stations in the bathrooms, and applied for a restaurant permit. They are now able to serve coffee to visitors and lunch during events. 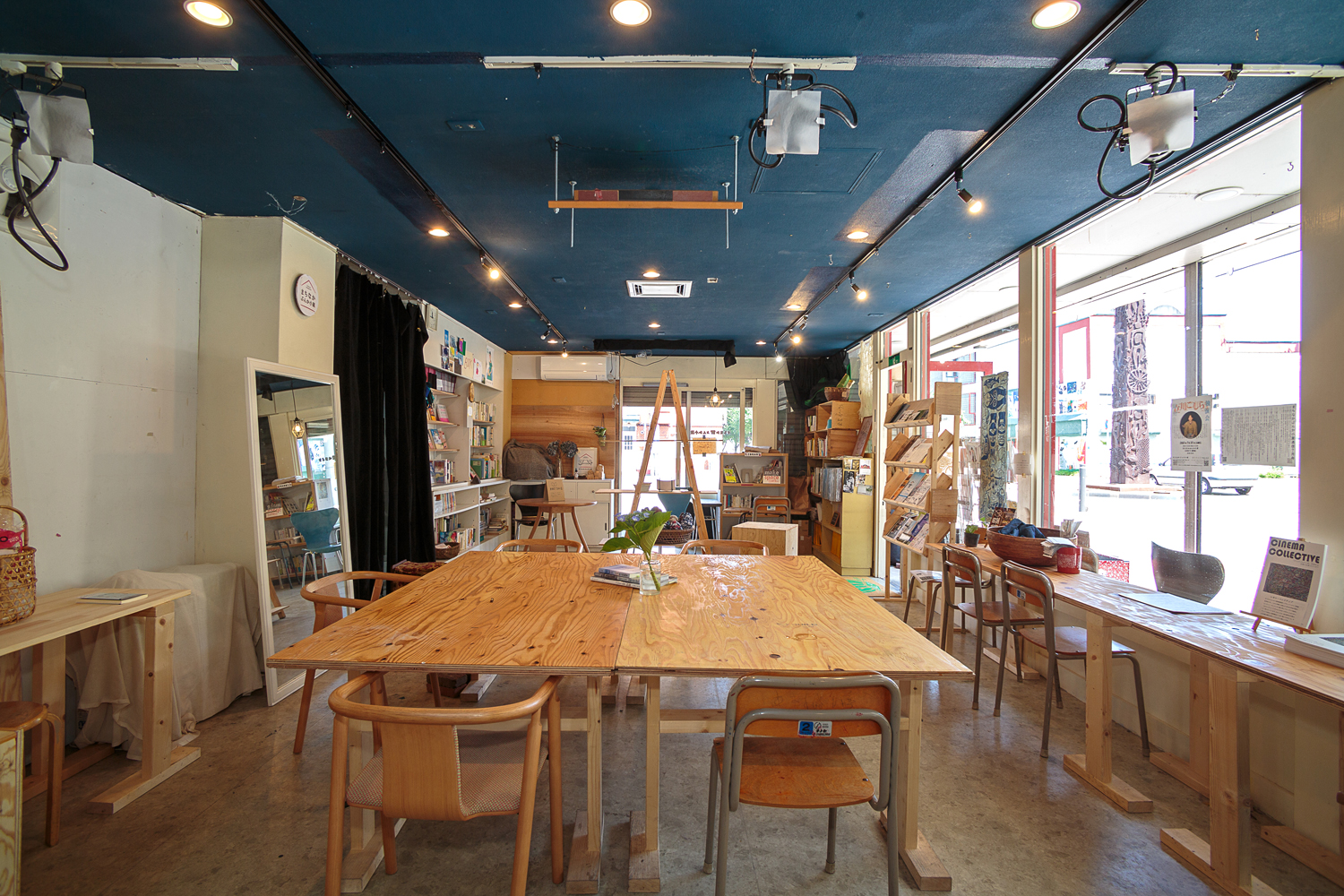 Wooden tables made by regular visitors

After the declaration of the state of emergency, there were many people who called for self-restraint in the field of culture and the arts because they are unnecessary and non-urgent. Takeda, however, sees culture and art as essential to the city.
“As the economy shrinks, governments and citizens will inevitably have less money to spend on culture and art. When this happens, the first thing to be lost will be the diversity of society. Culture and arts provide chances to understand people with different values. Places where we can meet people with different values from our own will become more and more important.”
Arimura, who was born and raised in Kyushu and worked in Tokyo before being transferred to Asahikawa, loved the city so much that he quit his job and decided to settle there. He shares the same feeling as Takeda.
The Machinaka Bunkagoya aims to create a community where people can live comfortably by recycling good will. Each individual member of the community plays an important role in community development. 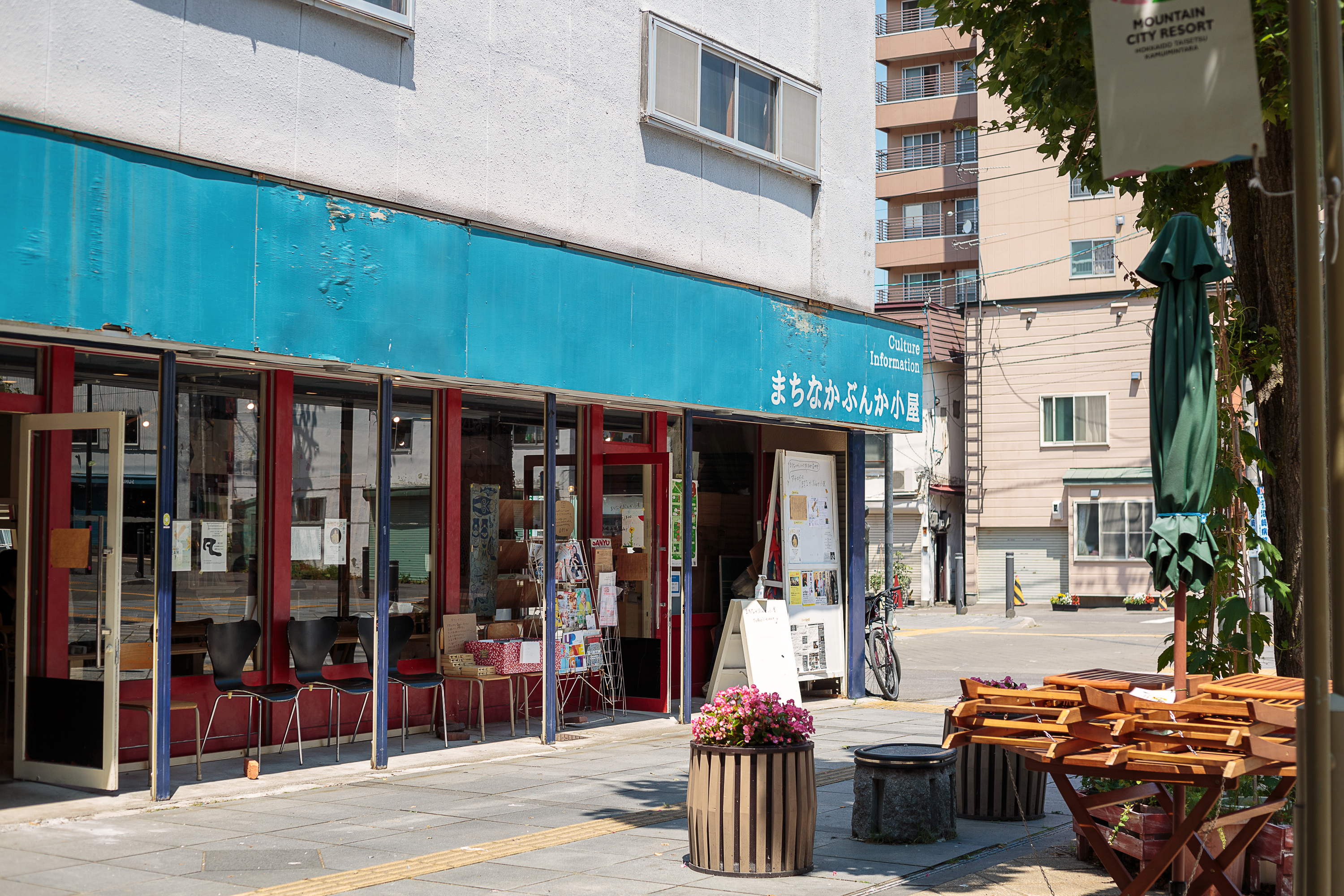