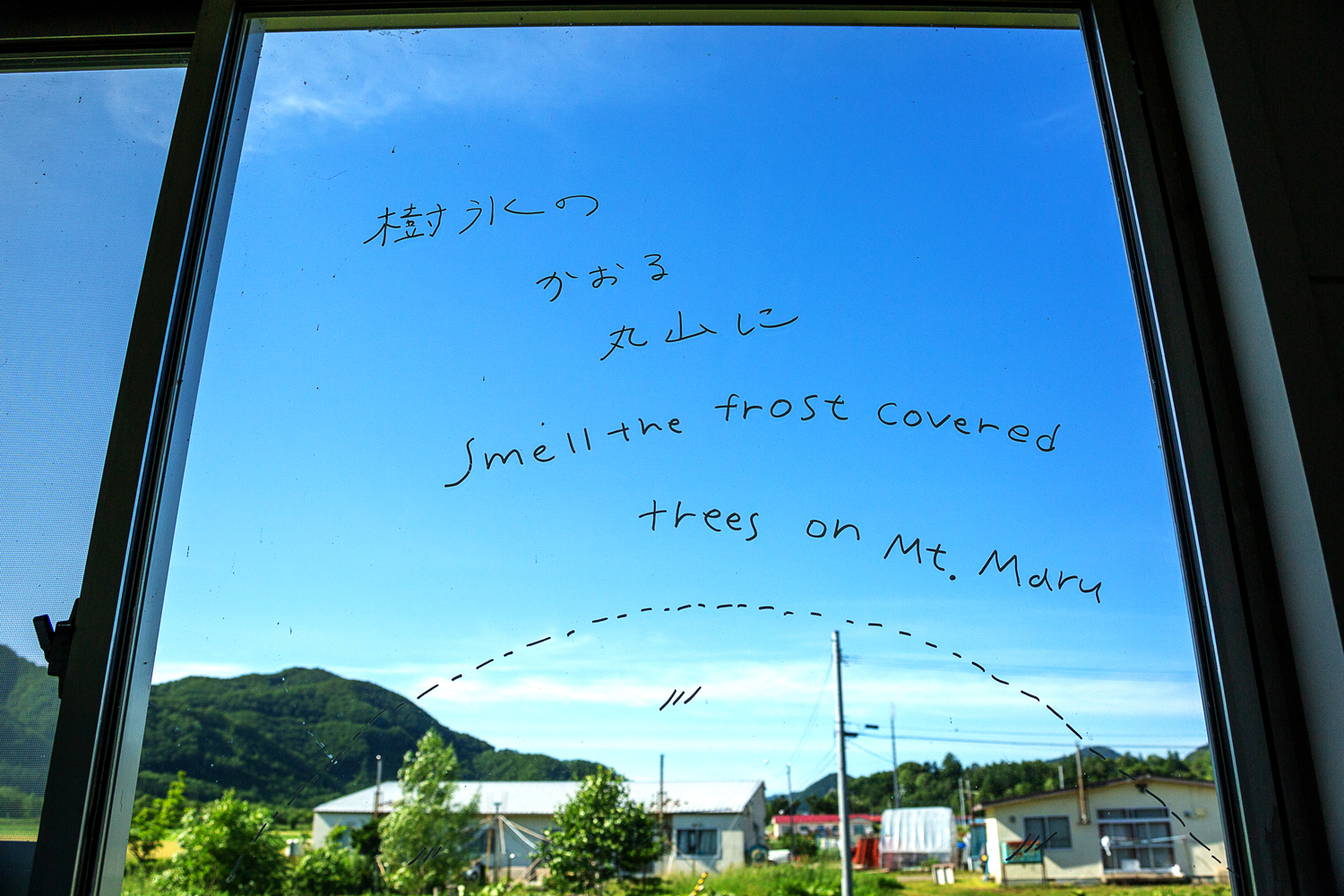 A window at the TOKOMURO Lab has turned into a work of art displaying the lyrics of the school song of the former Tokomuro Elementary School with its English translation and incorporating the scenery outside the window.

Urahoro has launched a series of unique businesses based on education, leading to the establishment of startups and cooperative enterprises. The base for this initiative is the TOKOMURO Lab.
Words by Shibata Miyuki
Photographs by Kurose Michio
Translation by Xene Inc.

A base for creating jobs

Urahoro is located at the eastern end of the Tokachi area. The town faces the Pacific Ocean to the south, with farmland and rich forests spreading inland. Even though the town has a wide range of primary industries such as agriculture, forestry, and fishing, the population has been declining rapidly. In 2005, the elementary and junior high schools were integrated, putting an end to a school with a long history.
The TOKOMURO Lab base of activities is this former school building of the abandoned Tokomuro Elementary School. 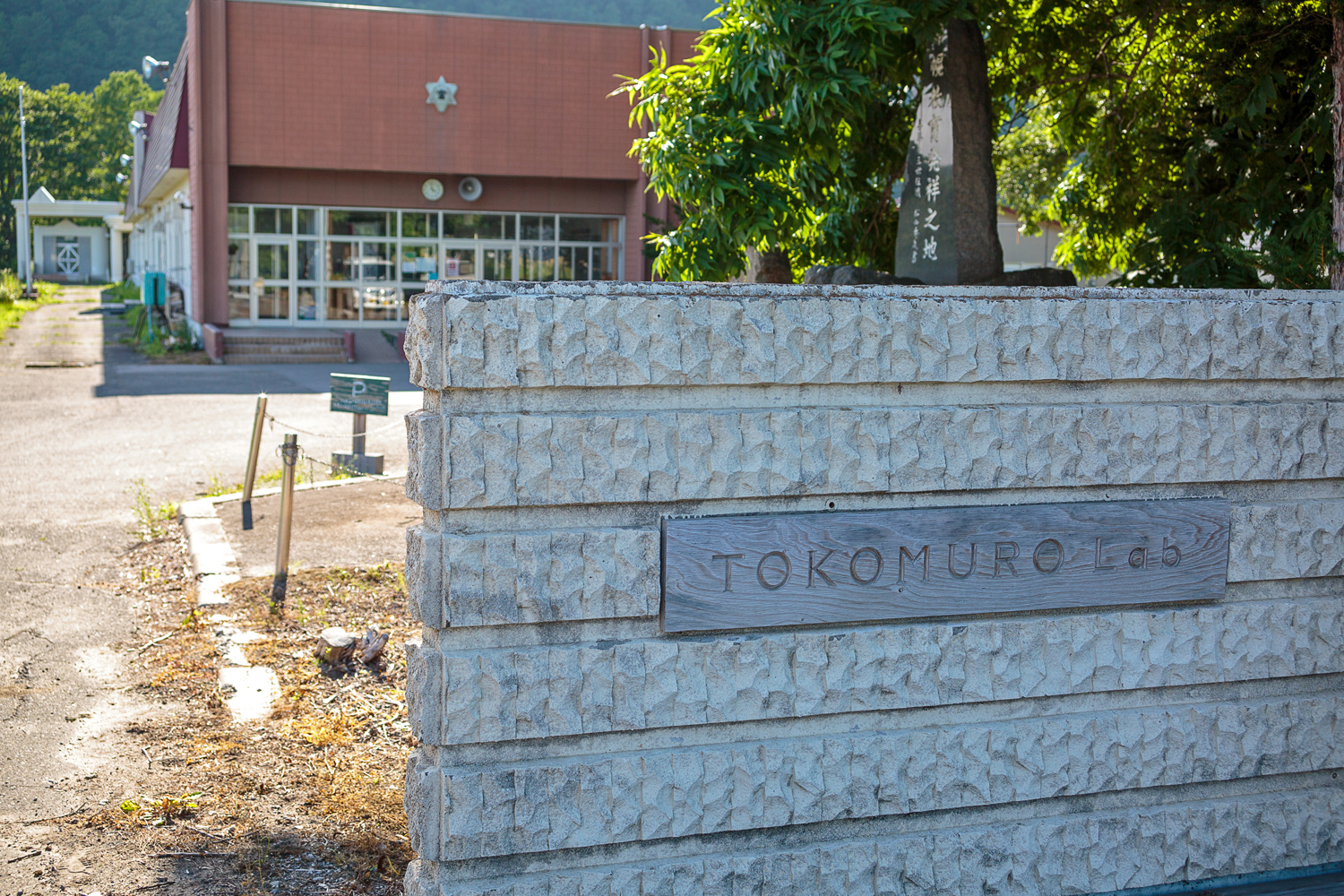 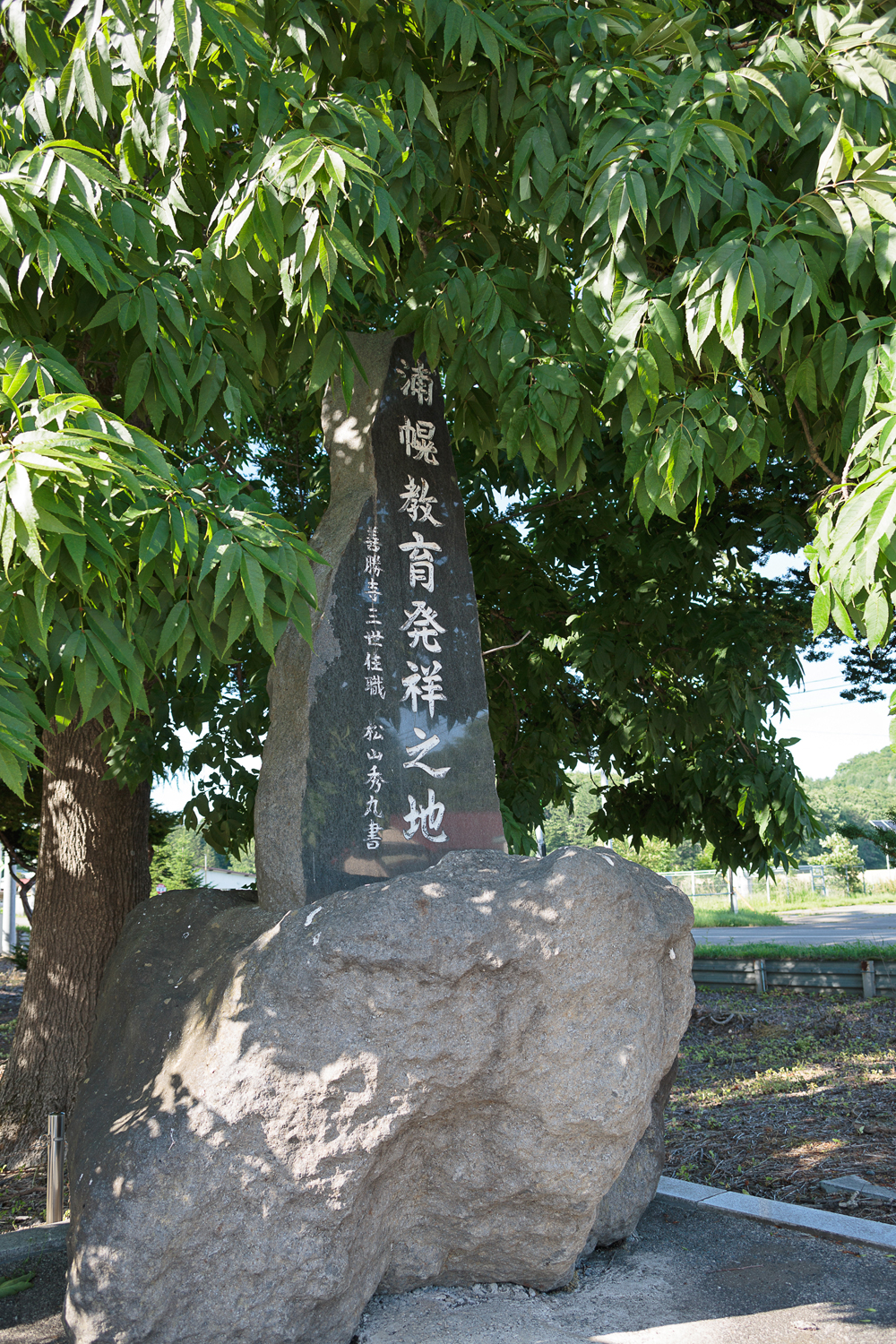 There is a monument to the birthplace of education in Urahoro near the school gate with a TOKOMURO Lab plate attached.

Since 2007, Urahoro has been working on a unique educational system called Urahoro Style and has launched five projects so far. The aim is to create a town where children can discover the charm and value of their hometown on their own through collaboration between the public and private sectors.
Among these projects, the Youth Work Creation Project was launched in response to the significant outflow of young people who were supposed to shoulder the future of the town. The Urahoro Entrepreneurship and Startup Lab, later known as TOKOMURO Lab, was a project born out of initiatives to create an environment where people could come back to the city even after leaving it. 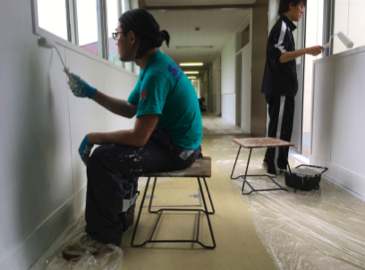 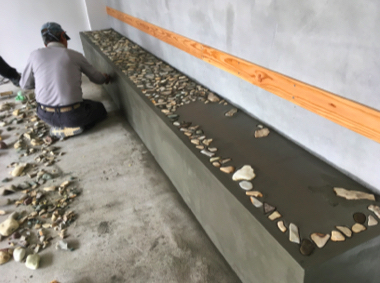 The launch of the Urahoro Entrepreneurship and Startup Lab in 2016.

A place for awareness

What happens at the TOKOMURO Lab?
Upon entering the building, there is a renovated classroom for work and a room for children to play. There is a book corner located in a long corridor and art in the windows. There is also a café, and at the far end of the building, a local company has moved in.
Aoki says, "Initially, our goal was to provide a place for people to work, such as a satellite office, but as we received requests from the people of the town to hold worksyops and presentations of their works, TOKOMURO Lab gradually shifted to a place where the people of the town can do whatever they want to do.” 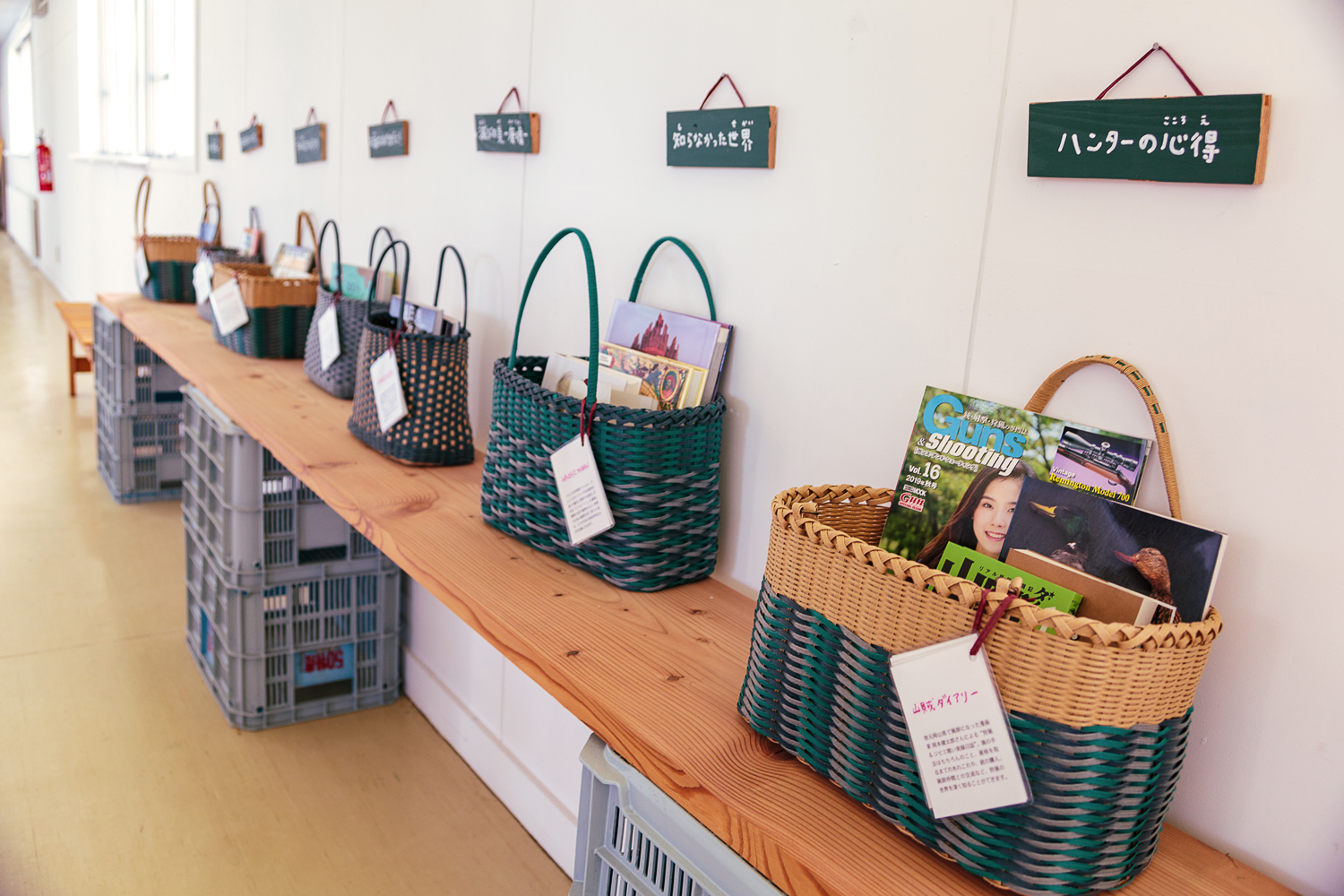 At the book corner, the selected books in the baskets are divided into themes. You can take the entire basket and read the books anywhere you like. 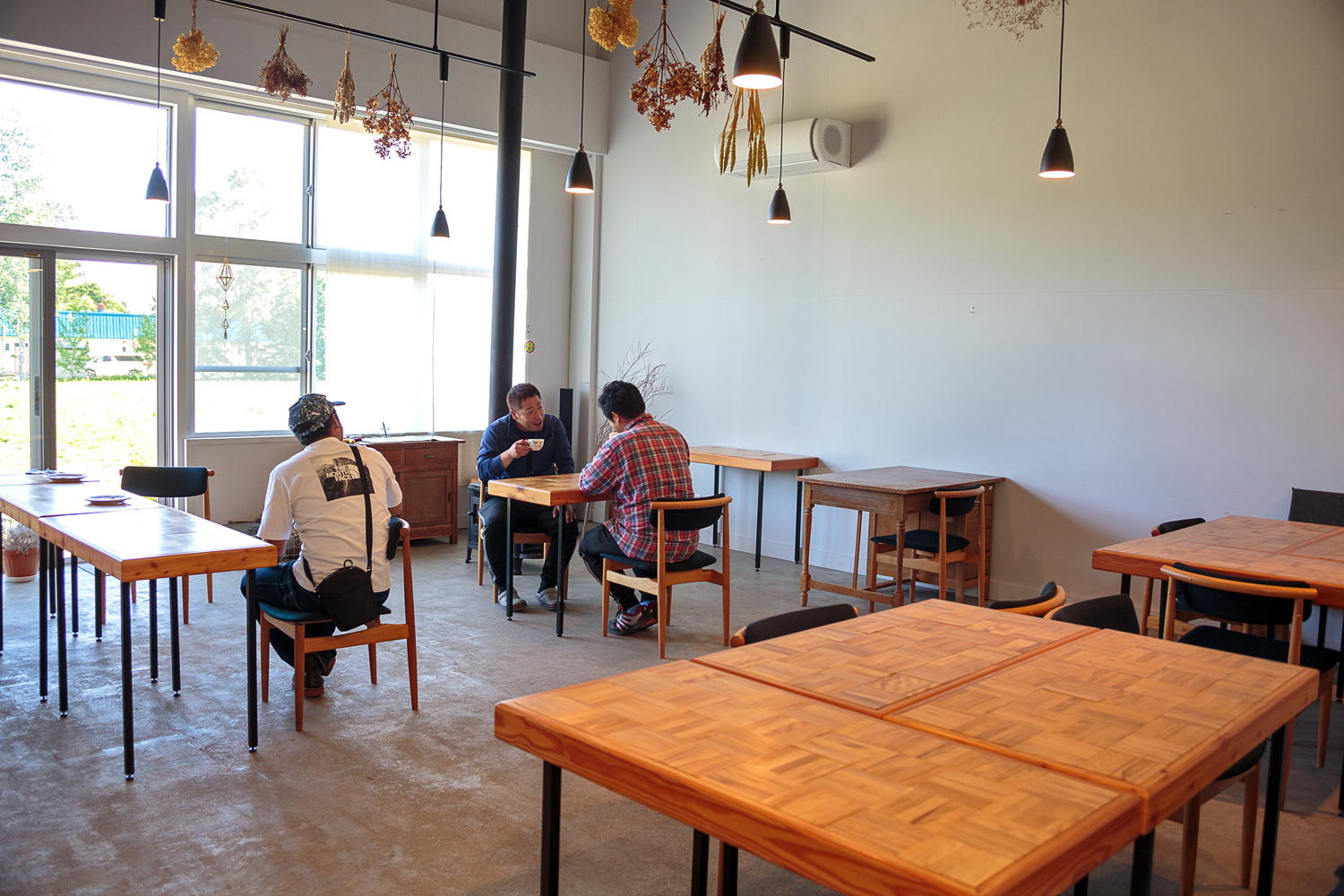 The TOKOMURO Cafe provides popular items made from Urahoro ingredients.

The Community Development Cooperation Team carries out awareness activities for the people of the town. "The local ingredients in Urahoro have great potential, but the locals don't pay much attention to them. We wanted to make people aware of the charm of local ingredients, so with the cooperation of local producers and young chefs from Urahoro, we started selling our original Labo-ben lunch boxes about once a month." As a result, people who had not been involved with the Lab before gained interest leading to exchanges. 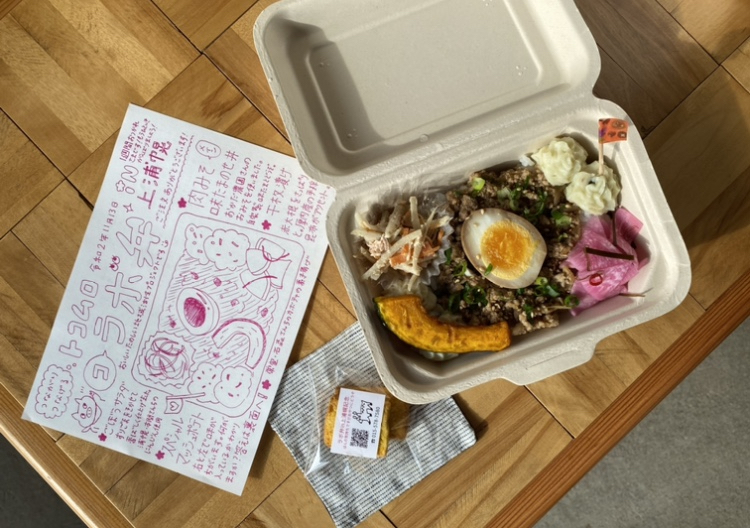 A place to make connections with the community

One of the initiatives that they have been working on since the launch of the lab is the Learning Journey. This is a training program for students from outside of Hokkaido, working adults, and international students who stay in the region to reconsider their values through interaction and experiences with the people of the town. Farmers, forestry workers, and people who have moved to the area act as tourists and conduct various programs.

Aoki says, "People in Urahoro tell their children that it's important to get out of the town, that there are things that they can only learn outside of Urahoro. It is important to have a place where you can connect with the town, and not just a place to come back to." 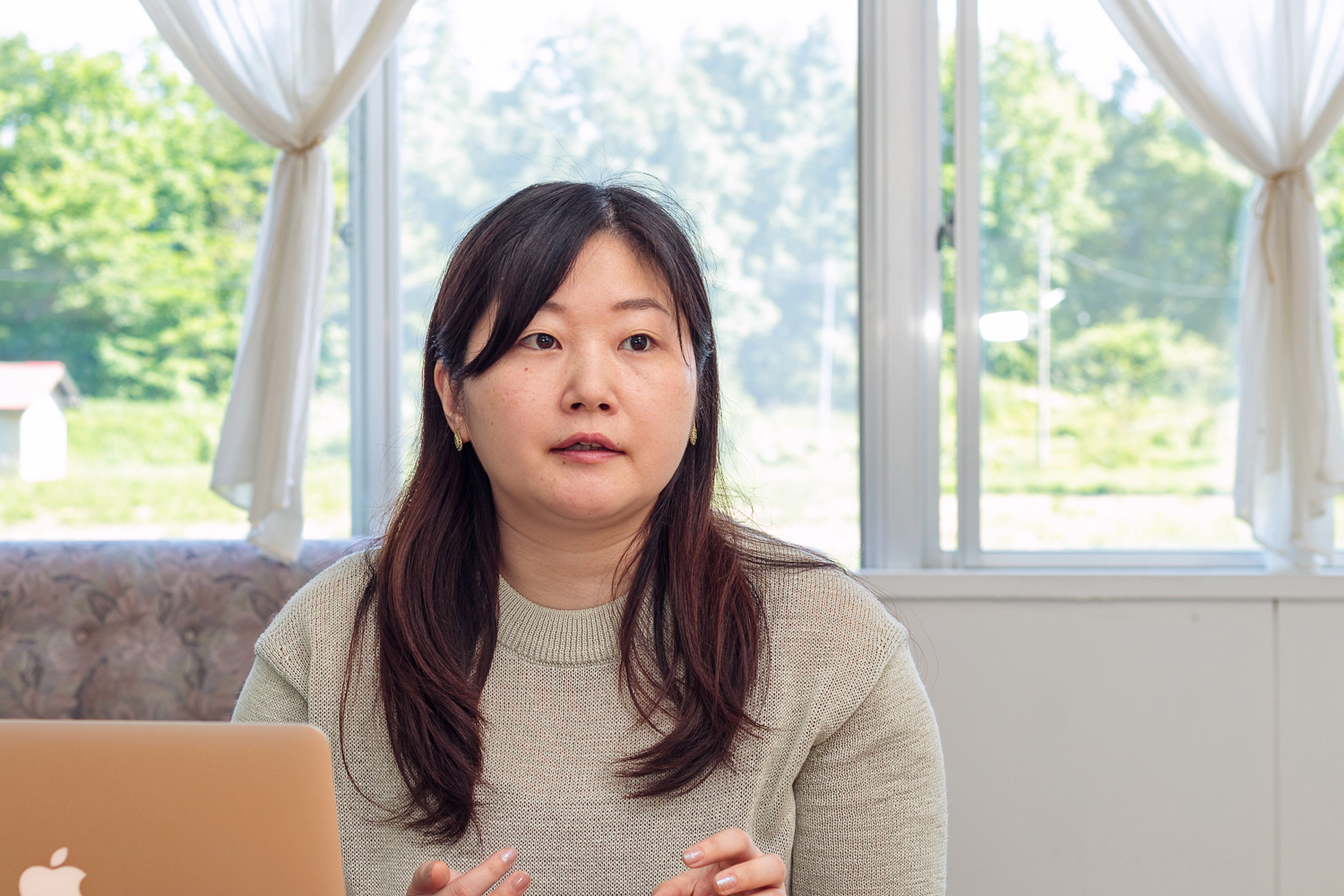 Aoki, who came to Urahoro through Learning Journey, plans to start a business in the town in the future.

The local companies in the lab were formed through connections between the city and the outside. One such company is BATON+, a wood processing company established in 2018 as a collaboration between a local forestry company and a Tokyo-based people. The company produces custom-made wood products with the aim of increasing the value of Urahoro-grown timber. Yu Kono, a woodworker who is involved in everything from design to processing, was born in Kanagawa Prefecture and has been active as the forestry leader of the Community Development Cooperation Team since 2019. He says, "I feel that the people in this town are very open to new things." 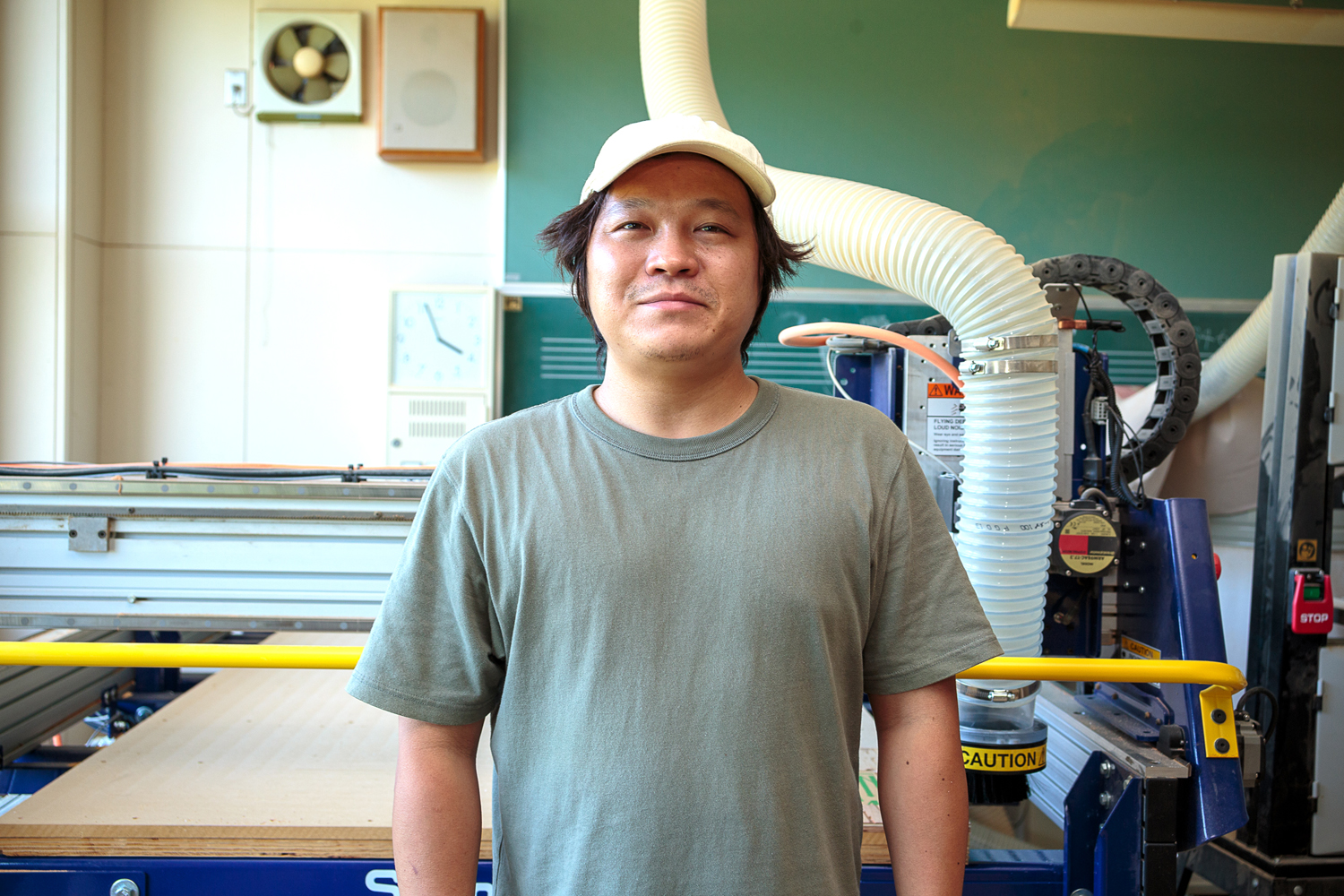 Kono participated in the Wood Program at Aalto University in Finland and moved to Urahoro.

A former member of Community Development Cooperation Team from outside of Hokkaido developed a cosmetic product using the town's flower, the rugosa rose, and started a sales company in the town. Based on the idea for using rugosa rose which was submitted by junior high school students in Urahoro Style's Children's Ideas Realization Project, the product was commercialized through hearings with town residents in the Youth Work Creation Project. The cosmetics from Urahoro have become a popular topic of conversation being sold at events both inside and outside of Hokkaido, and also serve as a PR tool for Urahoro. 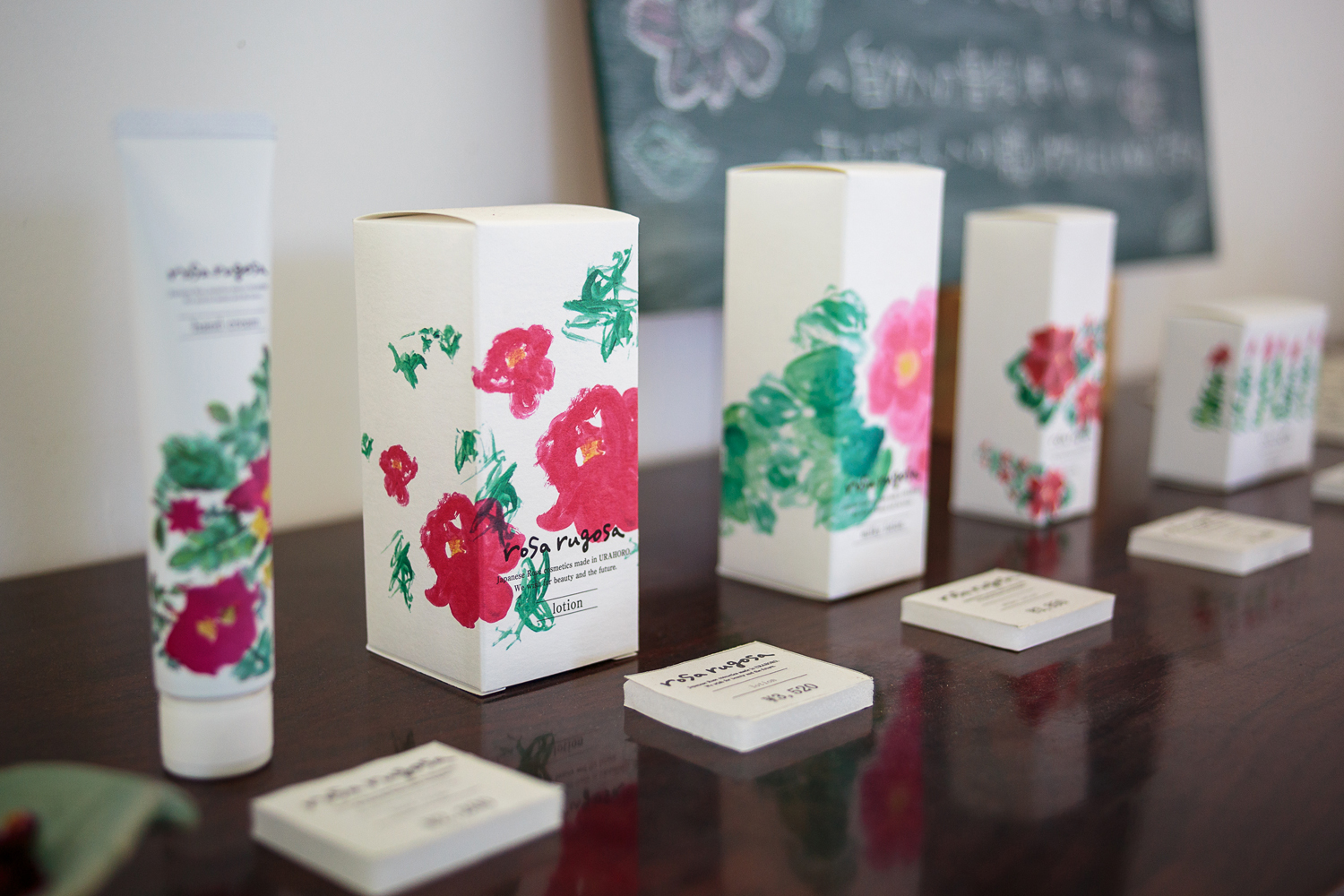 The introductory description of TOKOMURO Lab says that it is a "relaxed theme park in the countryside." The term "theme park" suggests a leisure facility, but here it means a place where local adults, children, and people from out of town can learn from each other, make new discoveries, and create new values. The children of the town will grow up in an environment where they can experience the energy-filled activities of the adults. 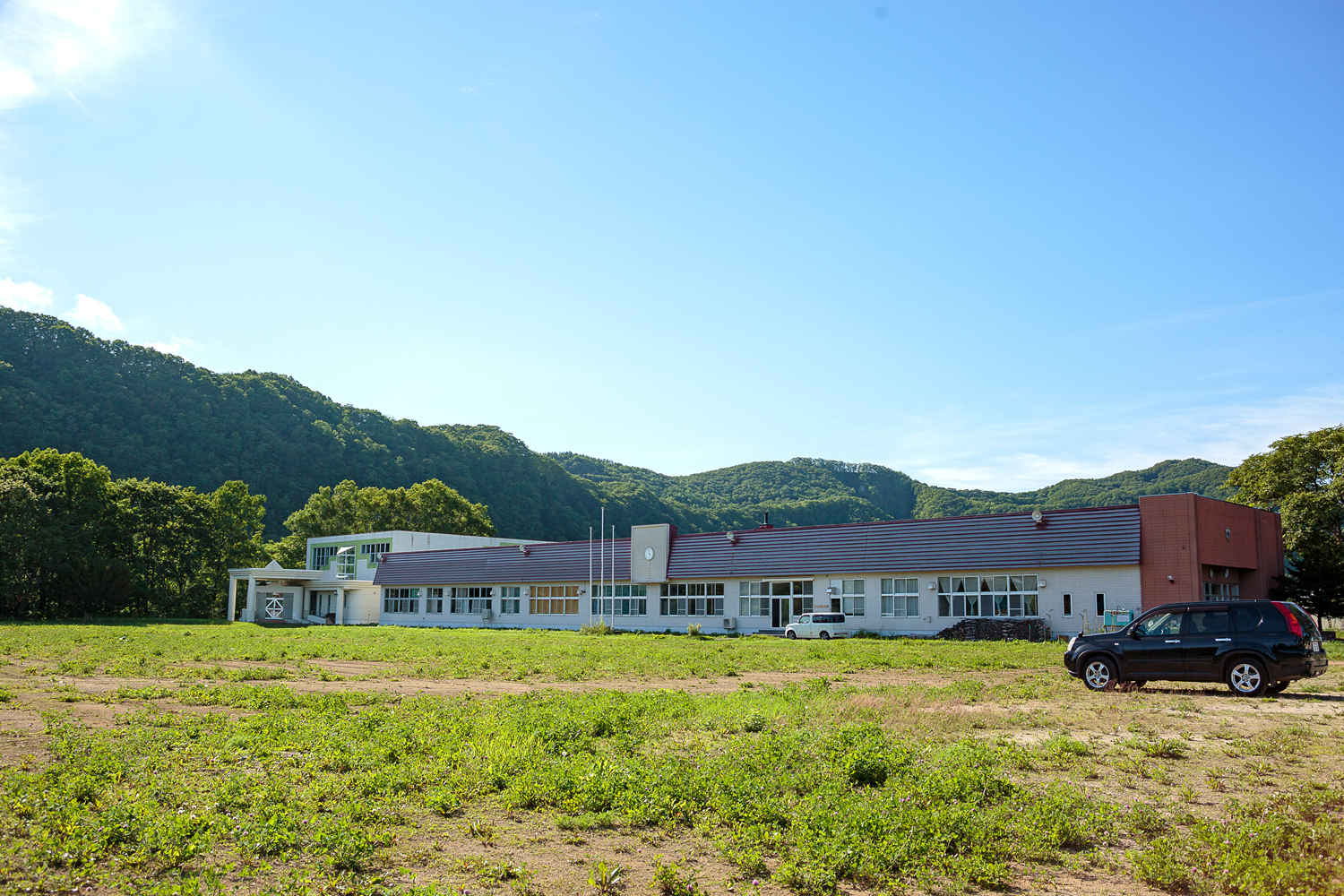