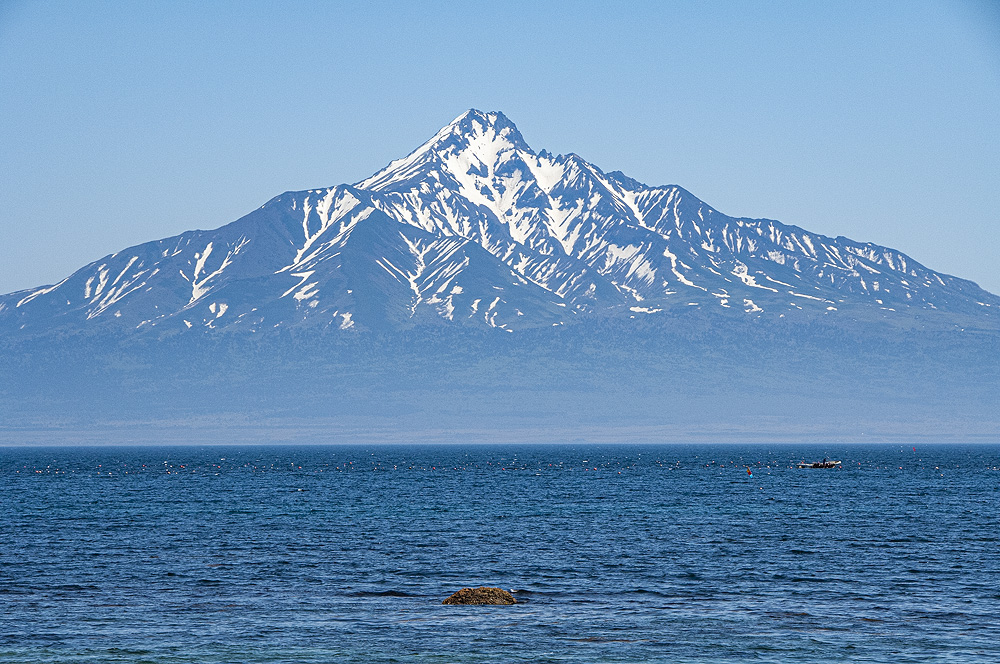 Rising above the sea, Mt. Rishiri has always been a major landmark for people traveling in the area (photo by Matsui Hisayuki)

At 45 degrees north latitude, let's take a look at the history of the kirin shishi lion of Rishiri Island.
Words by Taniguchi Masaharu
Translation by Xene Inc.

In September 1991, a large wooden box with the inscription Shishigashira Senhoshi (shishi lion head Senhoshi) was found in the community hall of the Senhoshi Nagahama district in the southwest part of Rishiri Island.
The find was made by Nishiya Eiji, curator of the Rishiri Town Museum, and a curator at the Hokkaido Development Memorial Hall (now Hokkaido Museum).
Nishiya was puzzled by the shishi lion's head, which he had never seen before.

There had long been a legend that there must be a shishi lion's head somewhere in the village, brought by the ancestors who had come from Tottori. However, there was no one who knew what kind of shishi lion's head it was.
One small clue was given by Morimoto Kiyoe (83 at the time), a descendant of those who came to the Nagahama area from eastern Tottori during the Meiji period (1868-1912), who was still alive and well. Morimoto said that his uncle had taught him to dance when he was a child.
Nishiya found a possible connection to Tottori and contacted the Tottori Prefectural Museum.
This shishi lion's head was a kirin shishi lion, a shishimai lion dance kagura that is still performed in Inaba, a region in the eastern part of Tottori Prefecture. The shishi lion head, which looks different from an ordinary kagura shishi lion, is a kirin, a mythical spirit animal from Chinese folklore. 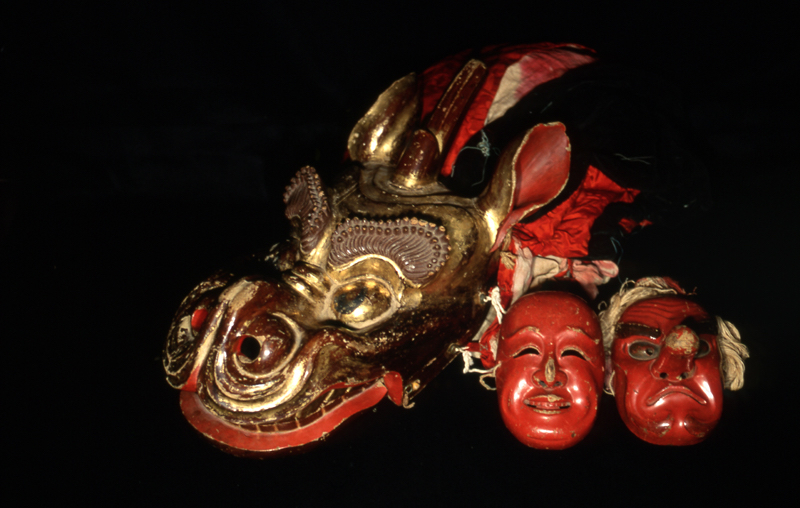 Kirin shishi lion, sarutahiko and shojo orangutan at the time of discovery (photo by Nishiya Eiji)

Morimoto's family came to Nagahama from Kabutoyama, Tottori City (present-day Satoni) when his grandfather, Kintaro, was still living there in 1894. However, there were no kirin shishi lions in Satoni. The uncle who taught Morimoto the shishi lion dance was born in Akisato, a town next to Satoni. When he researched Akisato, he found a kirin shishi lion there.

The kirin shishi lion was introduced to Rishiri Island during the Meiji period (1868-1912). This discovery created quite a stir in Tottori as well.
In the summer of 2001, a group from Akisato visited the island. They expressed their wish that the kirin shishi lion would be revived in Rishiri and that they would do their utmost to help.
Nishiya invited young people in their 30s and 40s in the Nagahama area to get together and try to awaken the kirin shishi lion. In June 2003, they began rehearsing by watching videos provided by Akisato.

In January 2004, members from Rishiri first visited Tottori for dance practice and social exchange, and two full days of training were carried out.
Then, on June 20, 2004, the stage was set for the Senhoshi Nagahama Shrine festival on Rishiri Island. In the evening, the kirin shishimai lion dance was finally revived in Nagahama for the first time in almost 100 years. 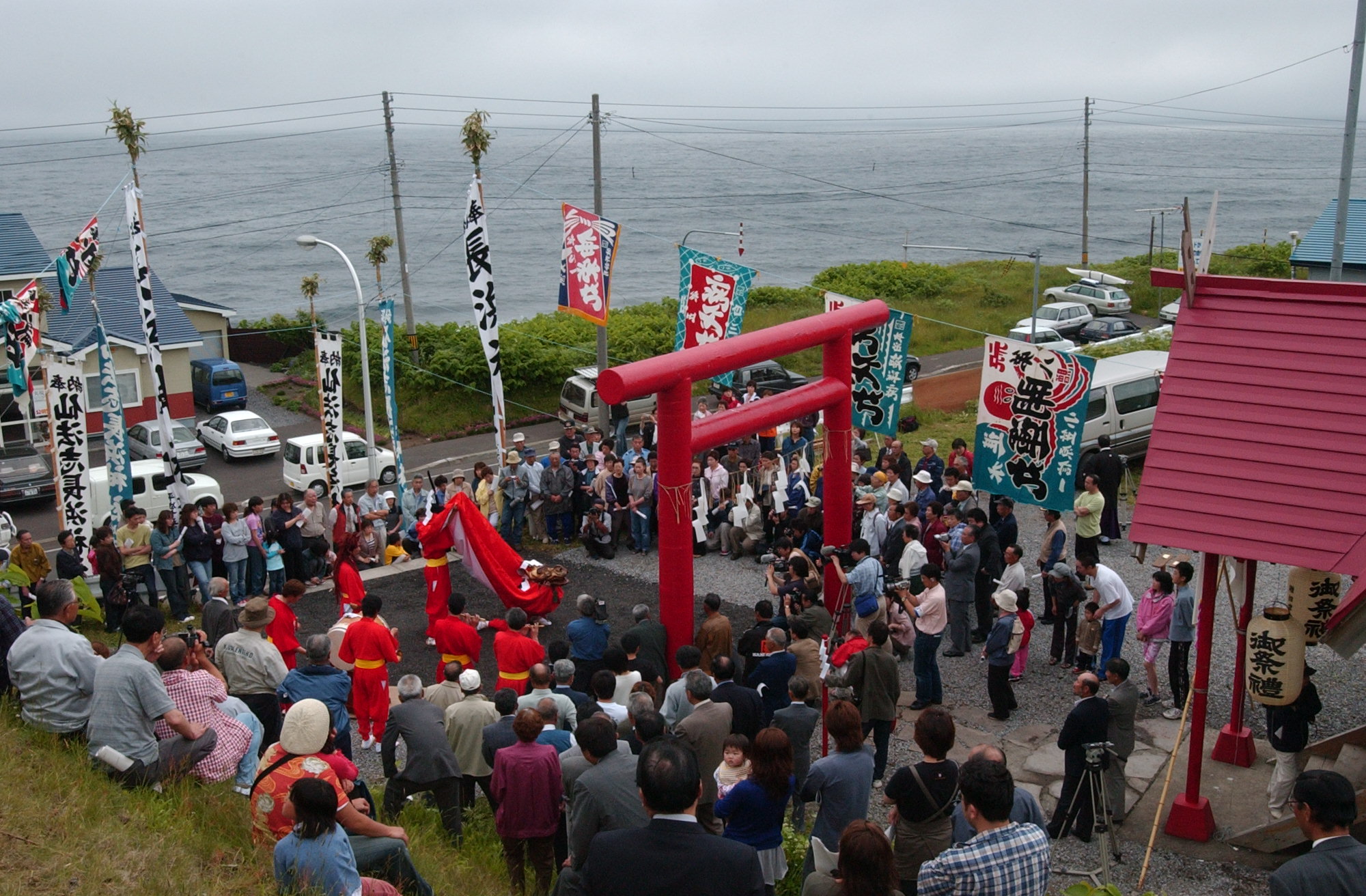 The kirin shishi lion dancing in Nagahama for the first time in about 100 years (photo by Nishiya Eiji).

Mystery of the origin