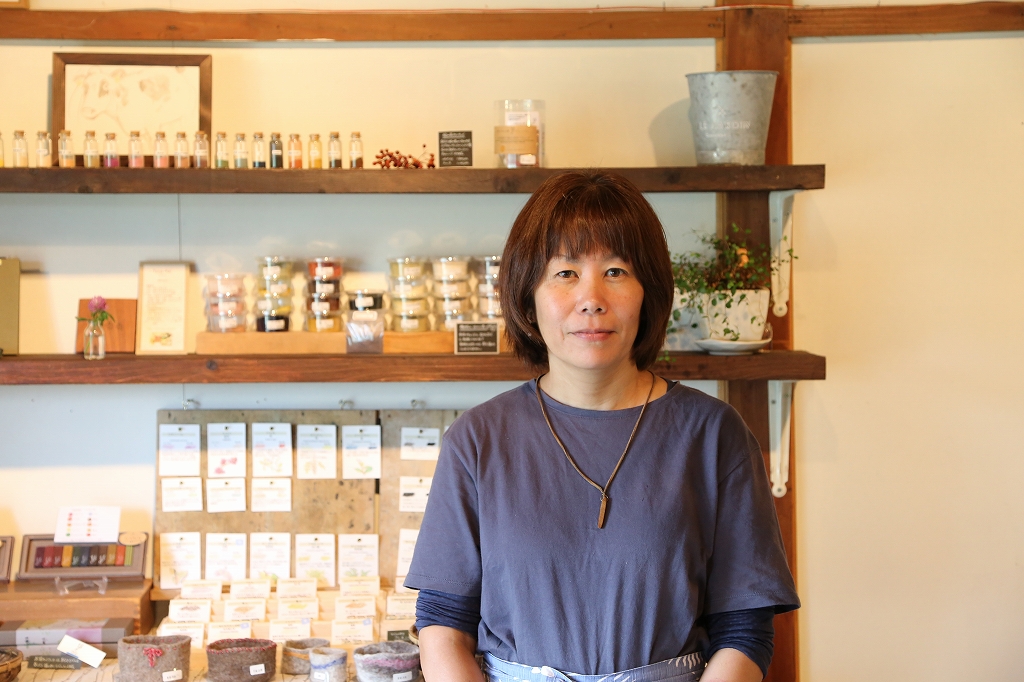 Ito Tomoko started making crayons from flowers, trees and seashells 17 years ago as a result of a boy she met who said: “I’ve never drawn a colored picture” due to sensitivity to chemicals. It took her the next ten years to produce the first crayon.
Words by Yajima Azusa
Photographs by Ida Yukitaka
Translation by Xene Inc.

I will make crayons you can use

Tomoko came to Hokkaido when she was 18 years old. After graduating from Obihiro University of Agriculture and Veterinary Medicine, she married into a farming family in Saroma Town. After hurting her back and no longer able to do farm work anymore, she started working with plant dyes. Tomoko enjoyed the process of extracting dye from flowers and then dyeing cloth. As she expanded her activities as a dyer, she also began selling her work. However, for a while, she was worried whether her works “could show her own originality.”

Let’s make crayons from some familiar flowers. Learning about chemical sensitivity from a boy who came to participate in Hokkaido Nature Experience Project from Osaka gave Tomoko the opportunity to make the crayons. Commonly, crayons and paints contain petroleum substances, causing allergies, so the boy could not use them. Without thinking, Tomoko made a promise to him, saying “I’ll make crayons that you can use” before she could stop herself. It took the next ten years through trial and error before she was successful. The name of the workshop, Tuna-Kai, means reindeer.

Although unable to directly give them to the boy, the crayons created a sensation when they went on sale. She received letters of appreciation from people with allergies and mothers with visually impaired children. 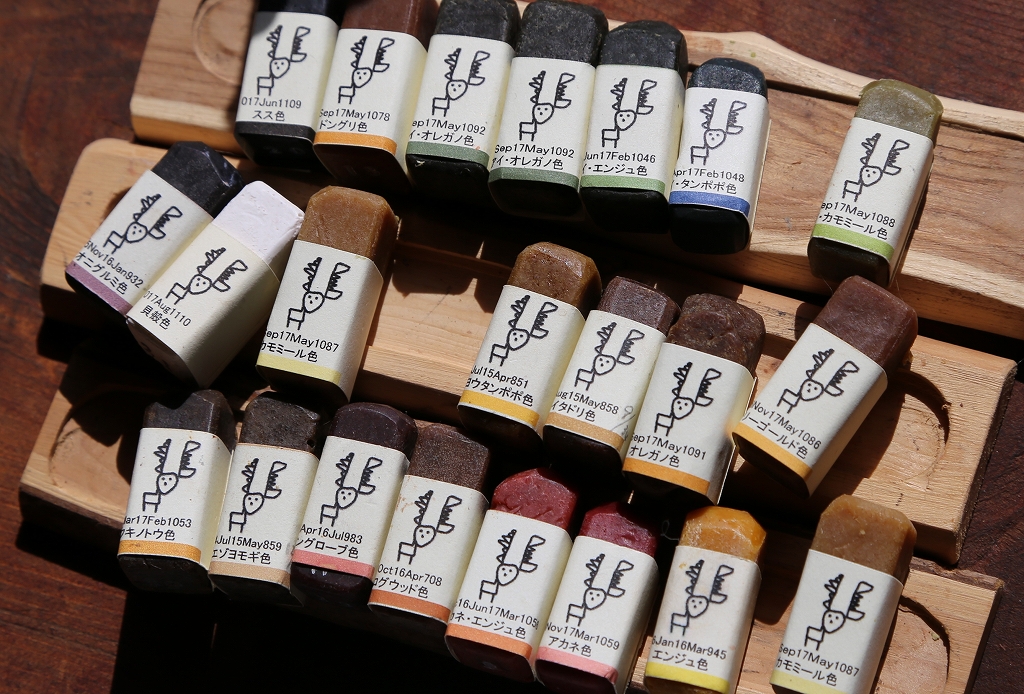 Crayons at Tuna-Kai don’t have names such as red, blue and yellow. The crayons are named after flowers and trees, such as dandelion and acorn, which produce the colors. 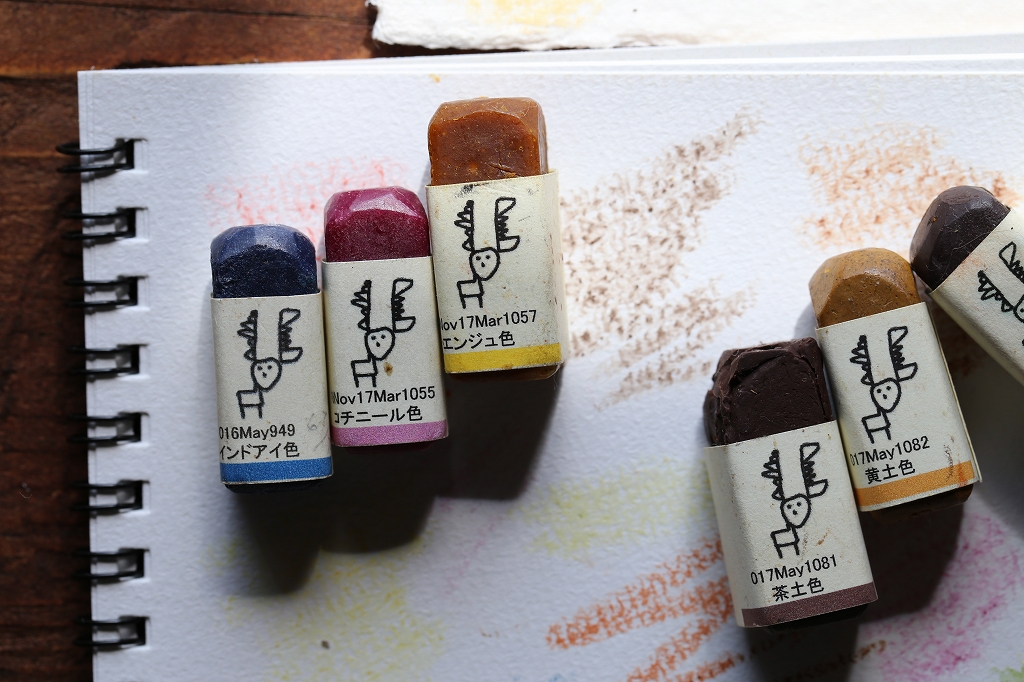 The crayons are slightly lighter in color, but when rubbed with water after drawing, the picture has the impression of watercolors. 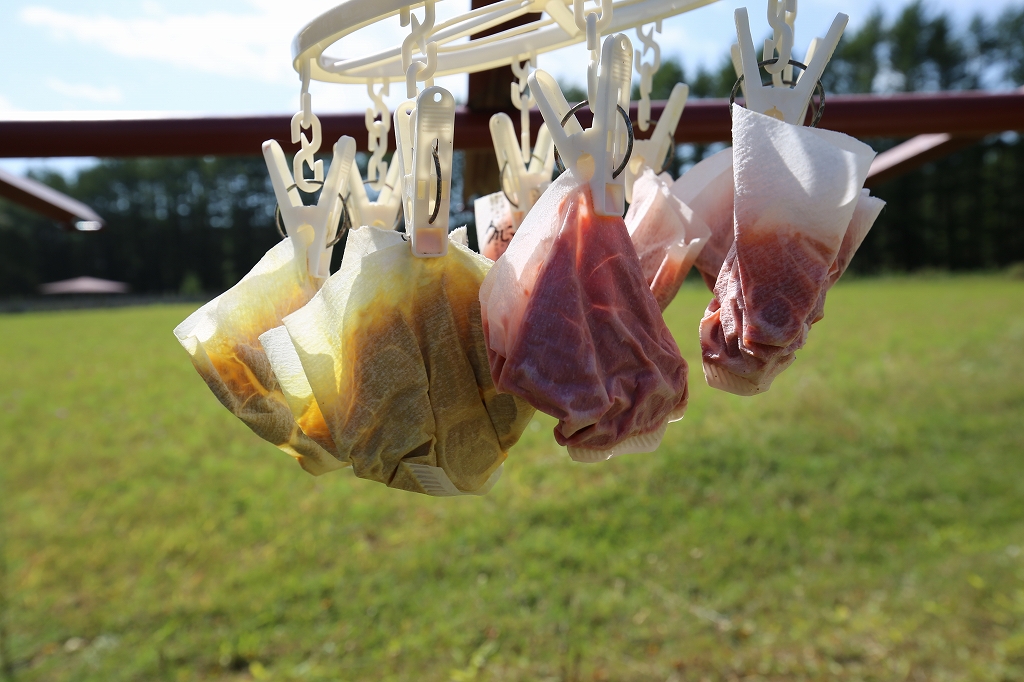 Drying pigments in the sun. 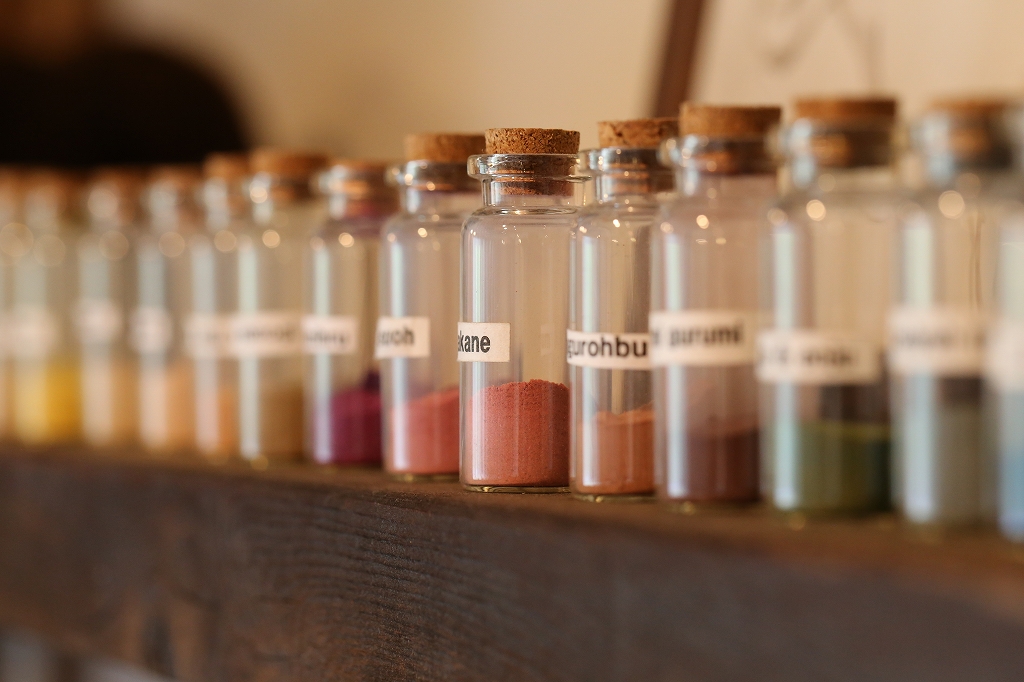 Pigments are also sold by weight. 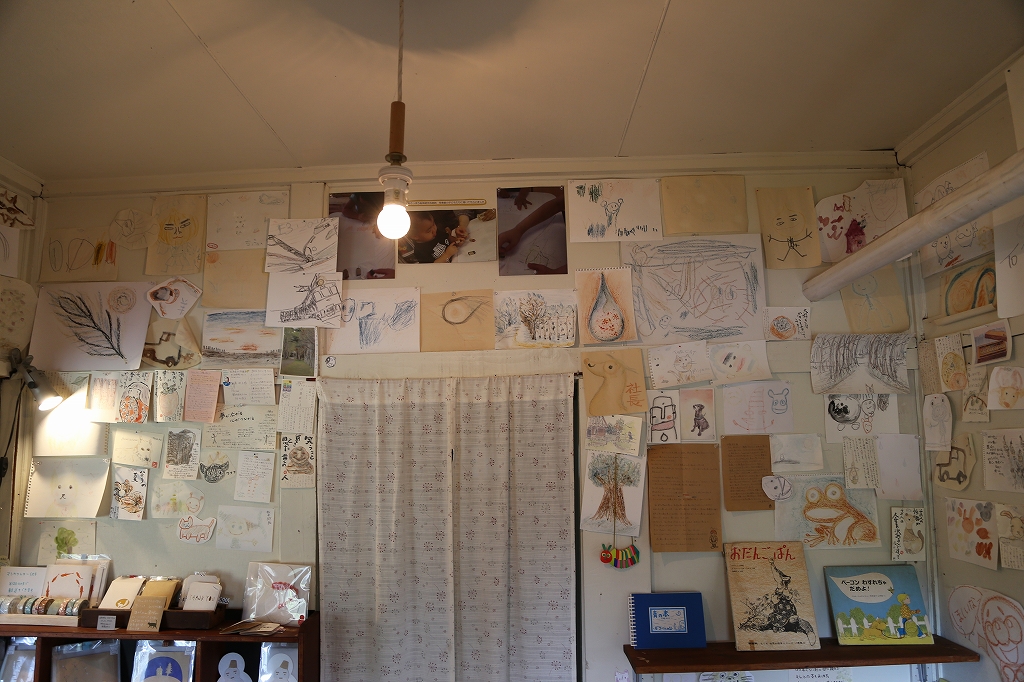 Tomoko has received pictures and letters drawn and written with her crayons from all over the country.

I want to try various things

Tomoko’s workshop is like a laboratory. “I have many failures. Even if a flower is red, it does not necessarily become the same color as a dye, and it is often difficult to produce the color green directly from plants,” she says.

She also made “Brown bear food Crayons” from Japanese butterburs and acorns, food for brown bears, in collaboration with Shiretoko Nature Foundation. The crayons come with a leaflet explaining the ecology of brown bears and how to deal a bear encounter.

Tomoko obtained flour by-products left over from the production of ultra-fine flour, “Yumechikara” in Obihiro from a friend. Mixing “Yumechikara” with a pigment does not make either crayons or watercolors. Instead, she is developing soft flour clay.
She sincerely hopes that one day, the young man who used to be that boy 17 years ago will come and see her again. 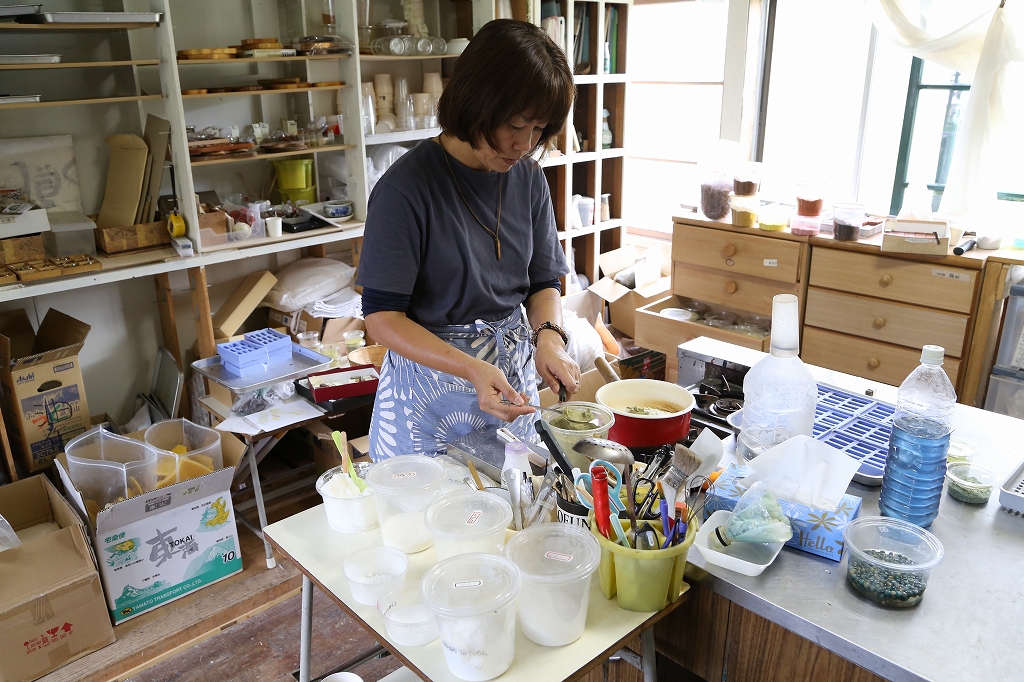 Tomoko continues to make handmade products, one by one. 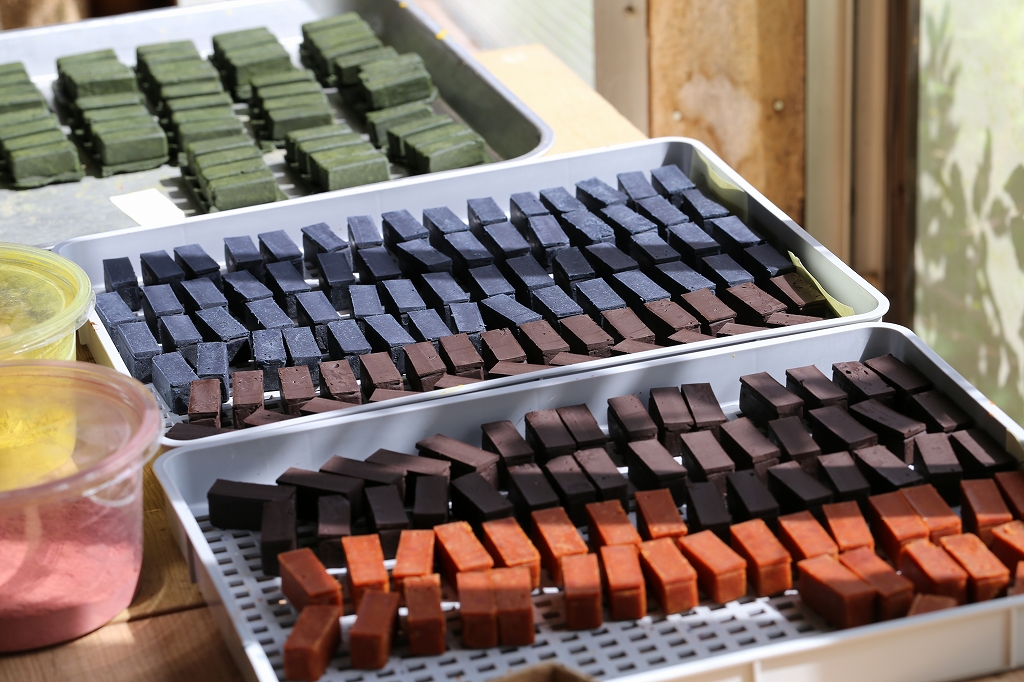 Brand-new crayons. It takes approximately one and a half months to complete one color. 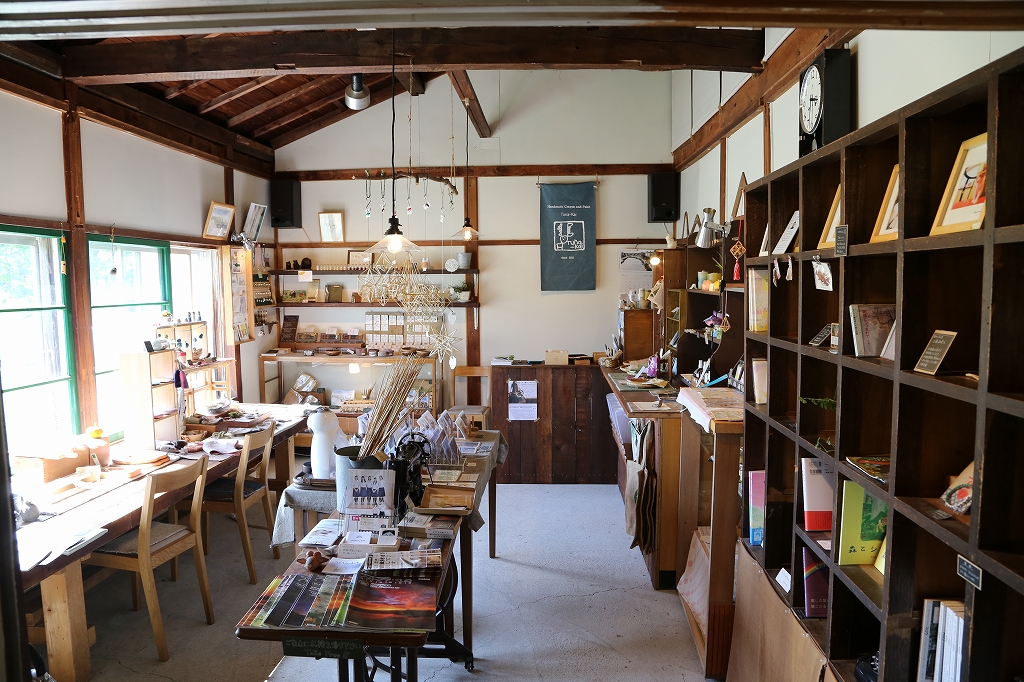 Sundry goods made by fellow artists are also sold at her shop. 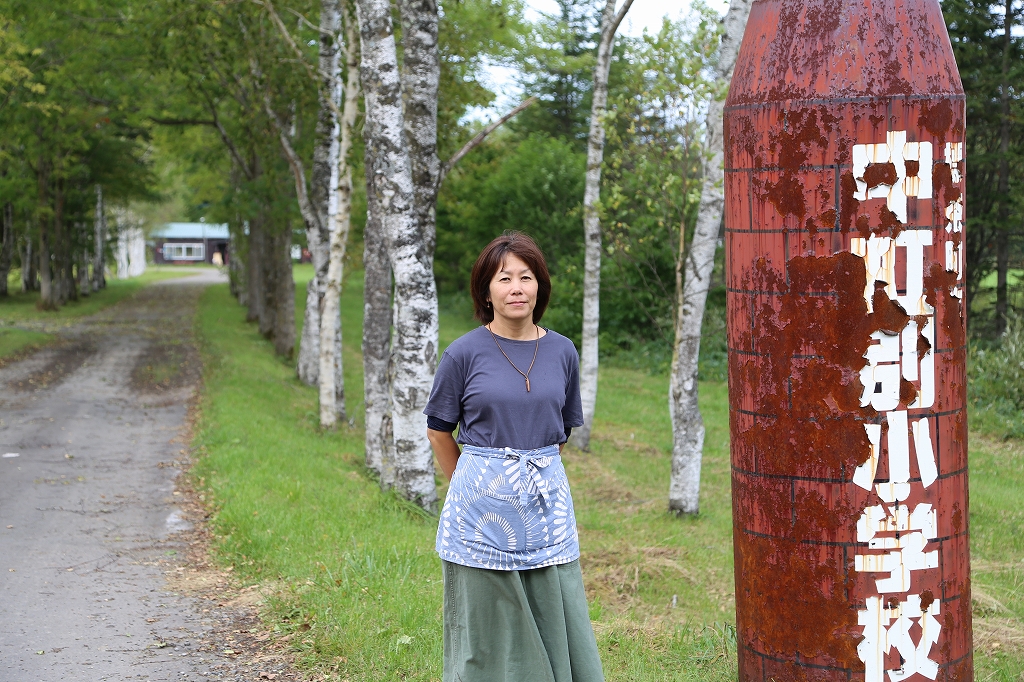 Her workshop is the former house for teachers of a closed elementary school, and stands behind a row of white birches. 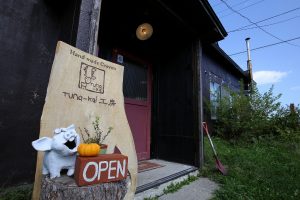 704-3 Nijibetsu-genya, Shibecha Town, Kawakami-gun, Hokkaido, Japan
Hours: 10:00-17:00, from Golden Week (the first week in May) until the end of August,
10:00-16:00 from September through early November
Closed: Mondays and Tuesdays
Note: May be closed on days in addition to the above times
Web Site