Chicken rice was my father’s dish 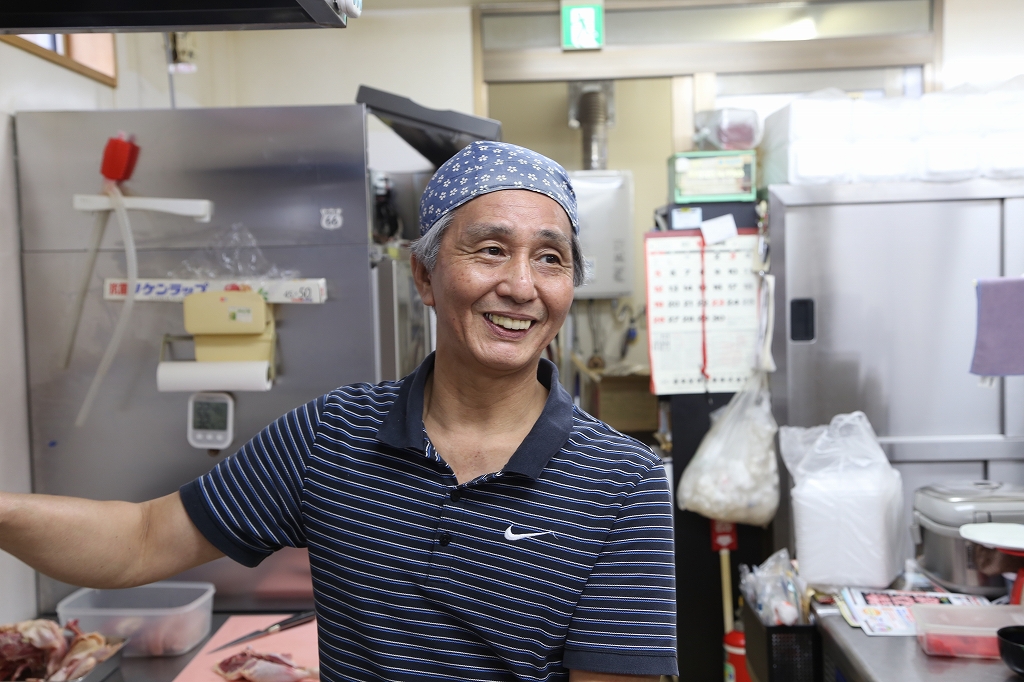 In Hokkaido, mention Bibai and many people will think of “chicken rice” and “yakitori” (grilled chicken). The former filled the stomachs of laborers from the pioneer period, the latter of those from the golden age of coalmining.
Words by Yajima Azusa  Photographs by Ida Yukitaka
Translation by Xene Inc.

Soup that takes time to make is the deciding factor

Whenever I go to the Asahikawa area, there is a place in Bibai I always want to pop into on the way home. The place is a drive-in known as “Shirakaba Chaya” on National Highway Route 12. Every time, I order the same set dish comprising shio (salt-flavored) ramen and chicken rice. There are other dishes on the menu, but I always order the ramen in a clear soup, and slightly sweet chicken rice – a fantastic combination of two dishes that feel somewhat incomplete without each other.

The drive-in’s proprietor, Saeki Hidetaka cooks the rice in soup made from stock slowly simmered for seven or eight hours from the night before, to which sugar and soy sauce is added. The rice is produced in Bibai, the chicken from Fukagawa. The ingredients are extremely simple – just chicken and onions. According to Saeki, “If chicken stock is boiled for five hours or more, the smell disappears. That’s why the cooking time and procedures must be strictly adhered to. If burdock is added to the ingredients, the flavor is deepened, but I don’t add it. This dish was born during the pioneer period when there was nothing, so I want to convey it in its original form.”
The ramen soup is also made from chicken stock, simmered for 15 hours, even longer than the stock for the chicken rice. 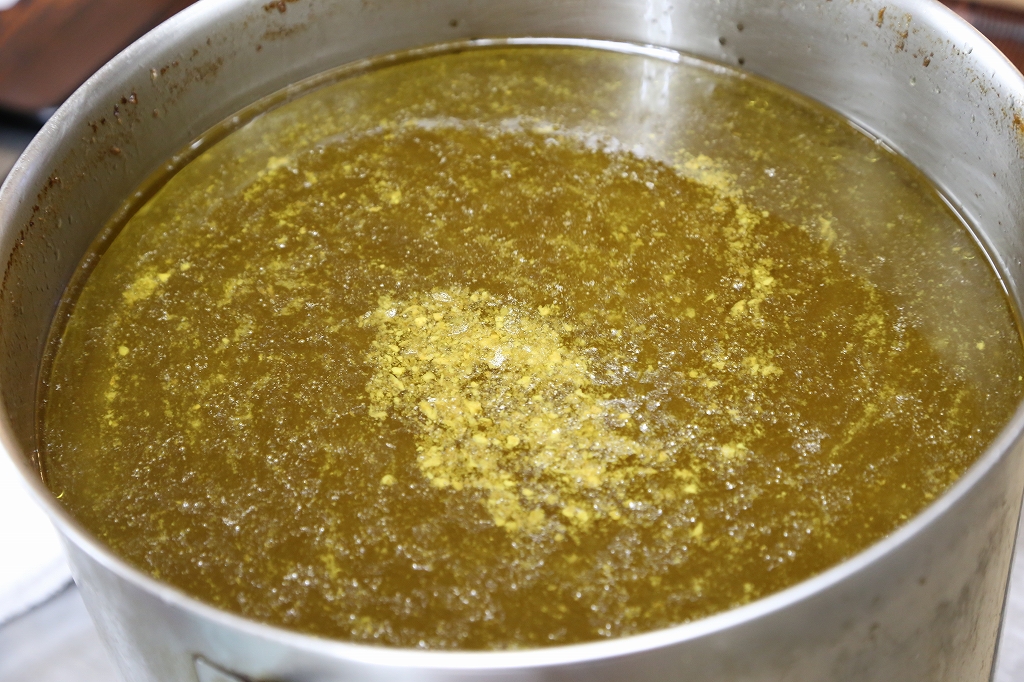 Soup made from stewing just chicken stock and onions 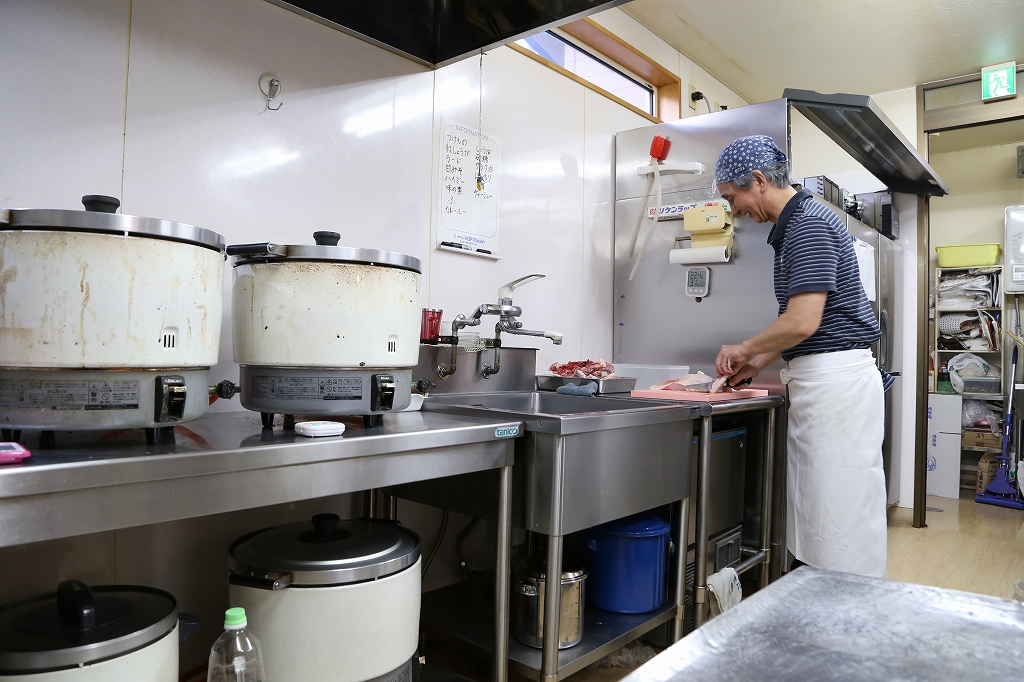 Five rice cookers in full use 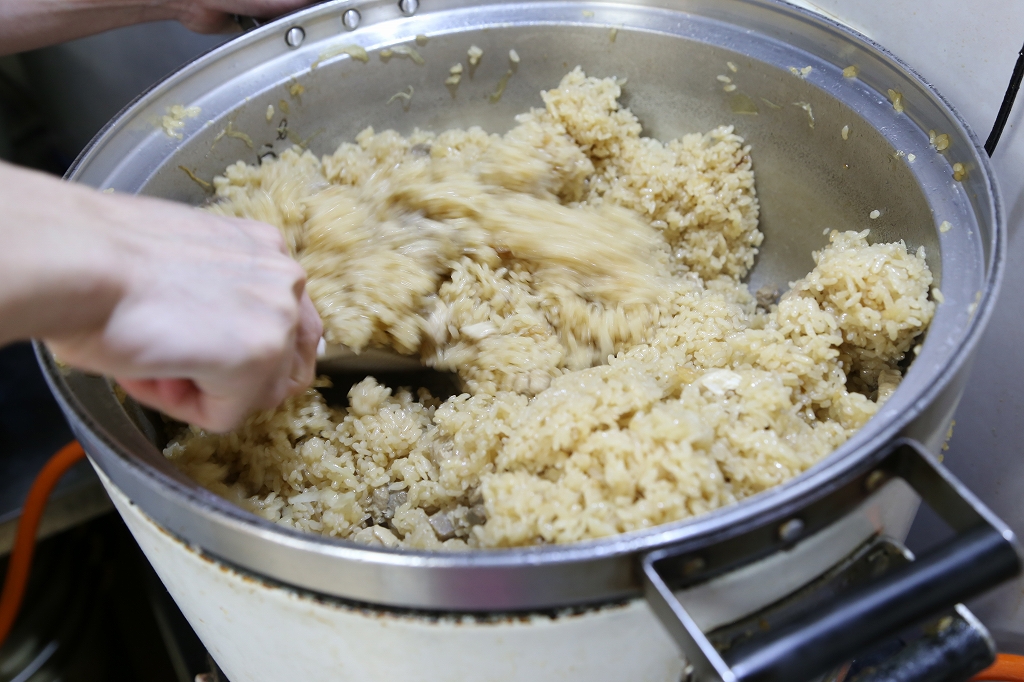 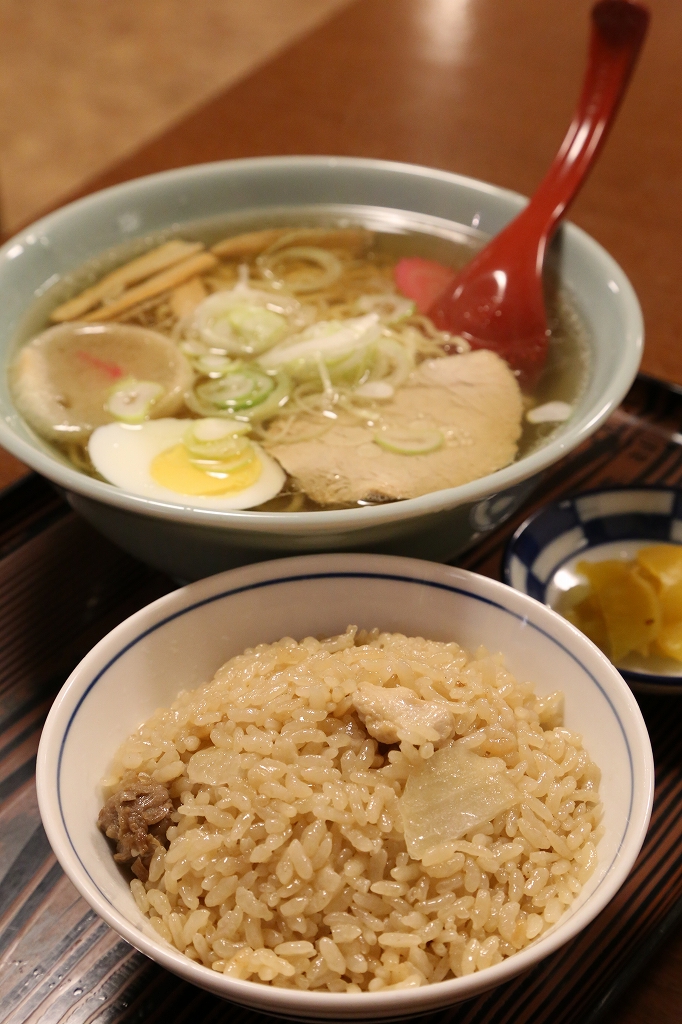 Made and eaten by three generations

The Nakamura district of Bibai was first developed in 1894, when 24 households of pioneers moved into the area under the leadership of 22-year-old Nakamura Toyojiro, who lent his name to that of the district. Water from the Ishikari River was successfully diverted into the rice fields, making rice production possible, and the name of Nakamura spread.

However, the land was also troubled by the repeated flooding of the Ishikari River. Toyojiro became worried about farmers collapsing with malnutrition, and loaned out a brace of chickens to each household. The following year, they would be asked to pay back one rooster and two female chickens and in that way the farm’s chickens would increase in number and the nutrition of the farmers would be ensured. When guests arrived from far away, a chicken would be killed in the name of hospitality, and cooked together with homemade rice, creating a dish that became the roots of “Nakamura chicken rice”.
Shirakaba Chaya’s first-generation proprietor was Saeki Mitsuo, a rice farmer from Yamagata prefecture who moved to the Nakamura district in 1972.

“The nicest thing is that children who came with their parents have got married and even the grandchildren’s generation come to eat.”

Hidetaka himself has memories of eating chicken rice as a young child. “In the Nakamura district, it’s not the taste of mum’s cooking, but dad’s. It started with killing the chicken and, especially in my father’s generation, it was the men who cooked the dish in many of the households,” he fondly recalls.

Last year, Hidetaka’s son Yuta, who worked in a Sapporo restaurant that served Western-style dishes, returned home. The new addition to the menu, Chicken rice omelet was Yuta’s idea. Currently, Bibai’s population is approximately 20,000, but there is a successor working hard to maintain the taste that’s been passed down from the pioneer period. 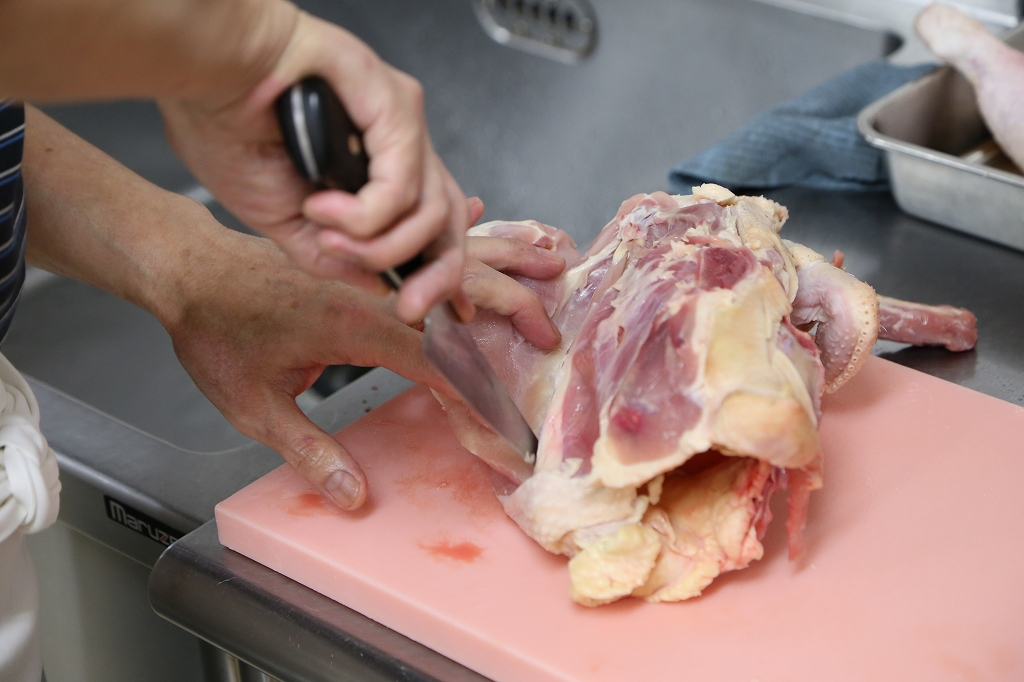 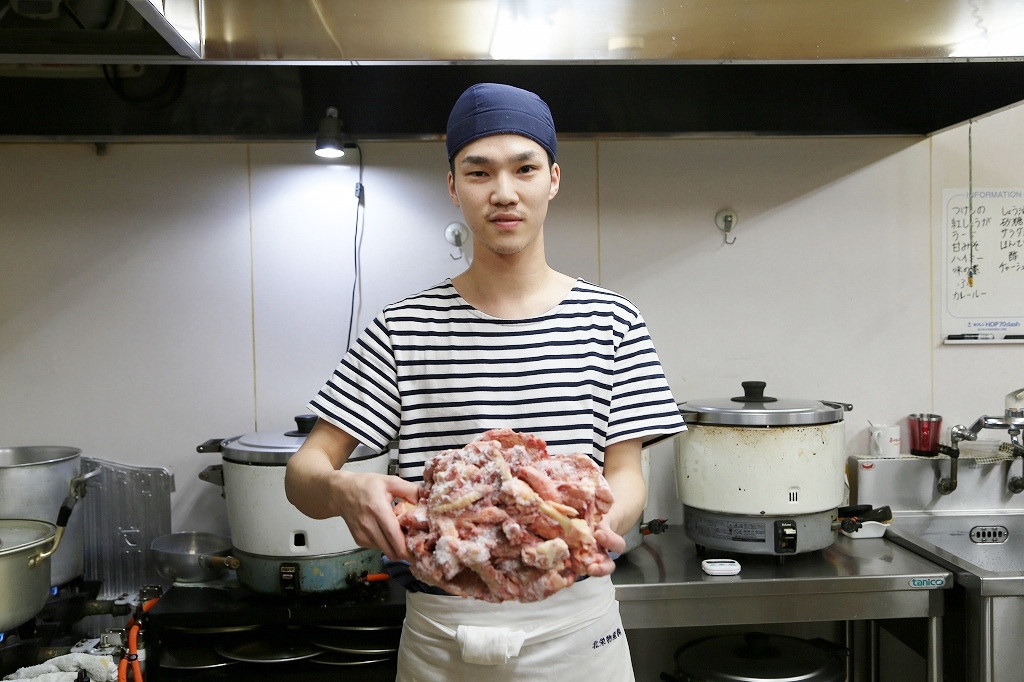 The son, Yuta is determined to follow in his father’s footsteps 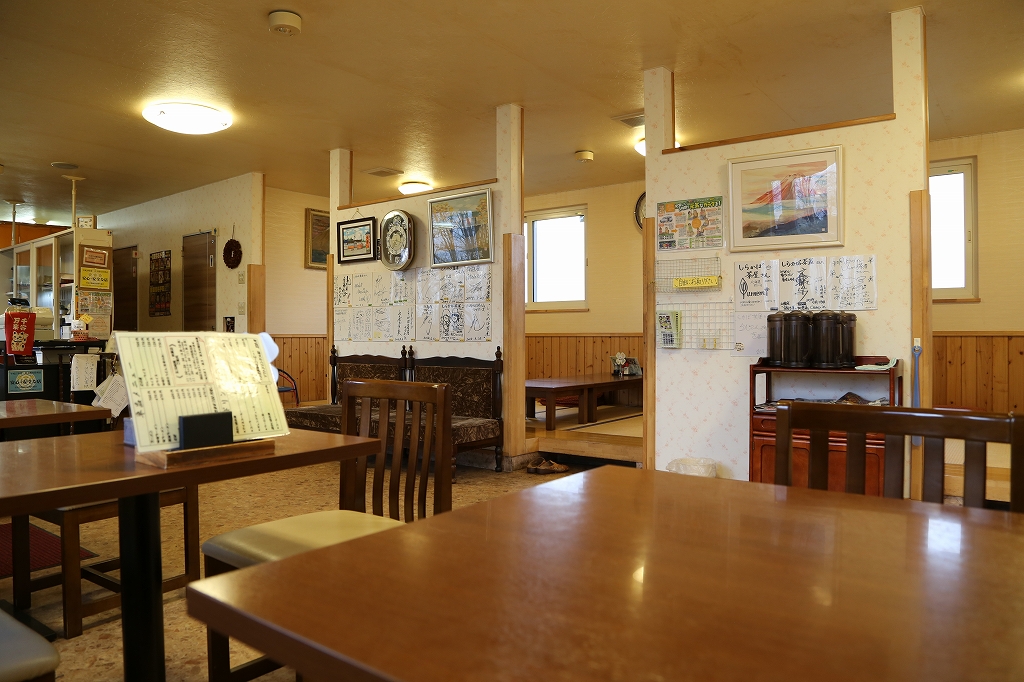 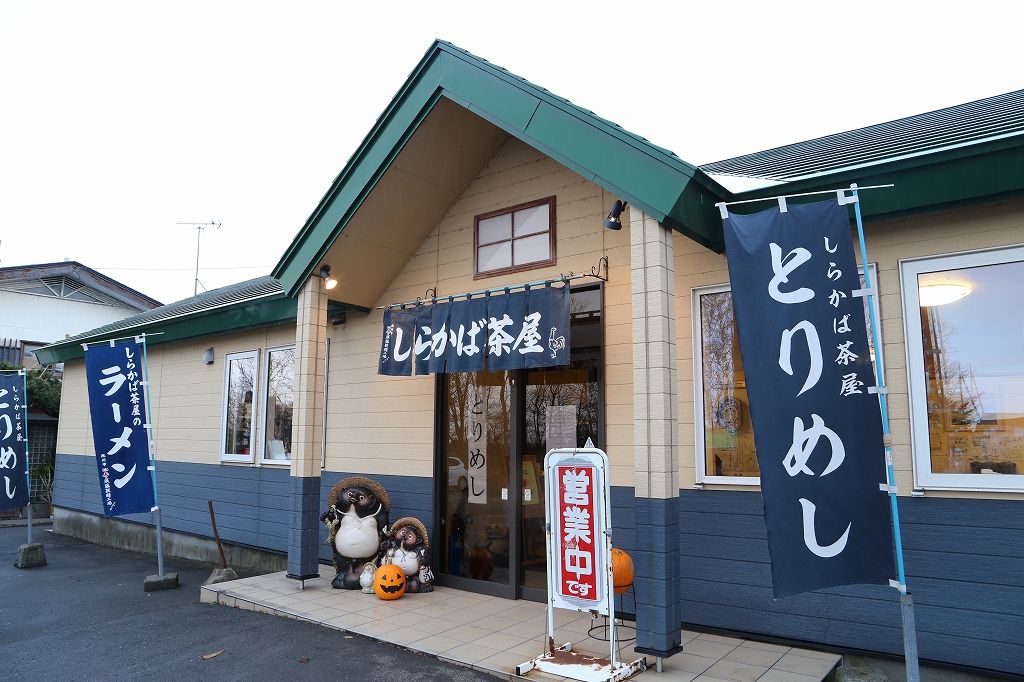