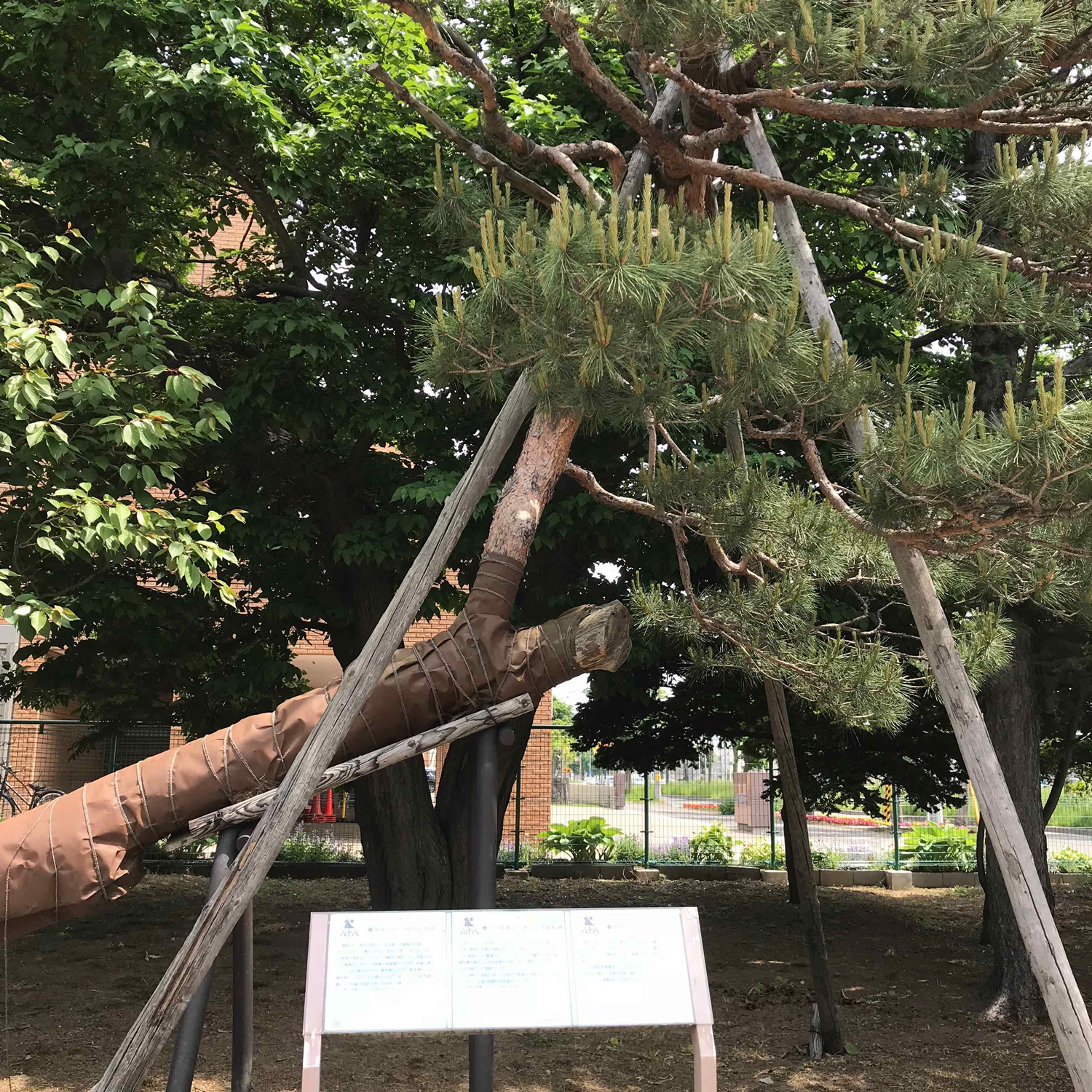 A pine tree on the grounds of Konan Shrine

Big changes can be seen in the Tonden district, including large shopping malls and collections of restaurants. In this article, we look at the past to examine the future of this former rice-growing hamlet that has become a new residential area.
Words and photographs by Taniguchi Masaharu
Translation by Xene Inc.

The end of the paddy-field area

Shinoro Tondenhei Village opened in 1889.
In 1972, when Sapporo became an ordinance-designated city, the village took on its current name of Tonden, Kita-ku, Sapporo City.

In the 1950s, rice was being grown there on 580 hectares of paddy fields at the peak. In 1966, the community began to transform from an agricultural village into a residential area. The Hokkaido Housing Public Corporation planned the creation of a housing development in Tonden, and a decision was made three years later to build rows of 800 detached residences.

Before long a major change came to Japanese agricultural villages: Rice production was regulated by the national government. With the Westernization of the Japanese diet, an excess of rice had become a serious problem. The government decided to move from rice production to producing such crops as wheat and beans. This had a large effect on Tonden. At the same time, it had become difficult to draw water from the Shinkawa River because the quality and flow had dropped. After repeated discussions, farmers decided in the summer of 1971 to stop irrigating with the river's water. Many paddy fields went out of commission.
Paddy fields irrigated with water from the Sosei River had also fallen to a little more than 52 hectares by 1978. At the time, it has become difficult to draw water from the Sosei River for reasons similar to those for the Shinkawa River, and the curtain drew to a close on the history of one large paddy field area in Sapporo.

But with the winter Olympics planned for Sapporo in 1972 and the city growing rapidly, already Tonden could no longer be called a suburban agricultural region. The area of designated urban zones increased further in the 1970s, and by 1975, Tonden already had a population of almost 10,000. In 1978, it had exceeded 13,000, and today 38,000 people live there.

Connecting to the next era

Third-generation descendant of a Tondenhei (agricultural soldier) Sakata Masaru wrote about ancient times in a book published in 1985. He was 70 at the time. In the book, he recalls the great pride he had in his grandfather and his comrades being settlers and samurai.
1989 was the 100th anniversary of the settlement of Tonden, and Masaru worked hard as a core member of the commemorative events. 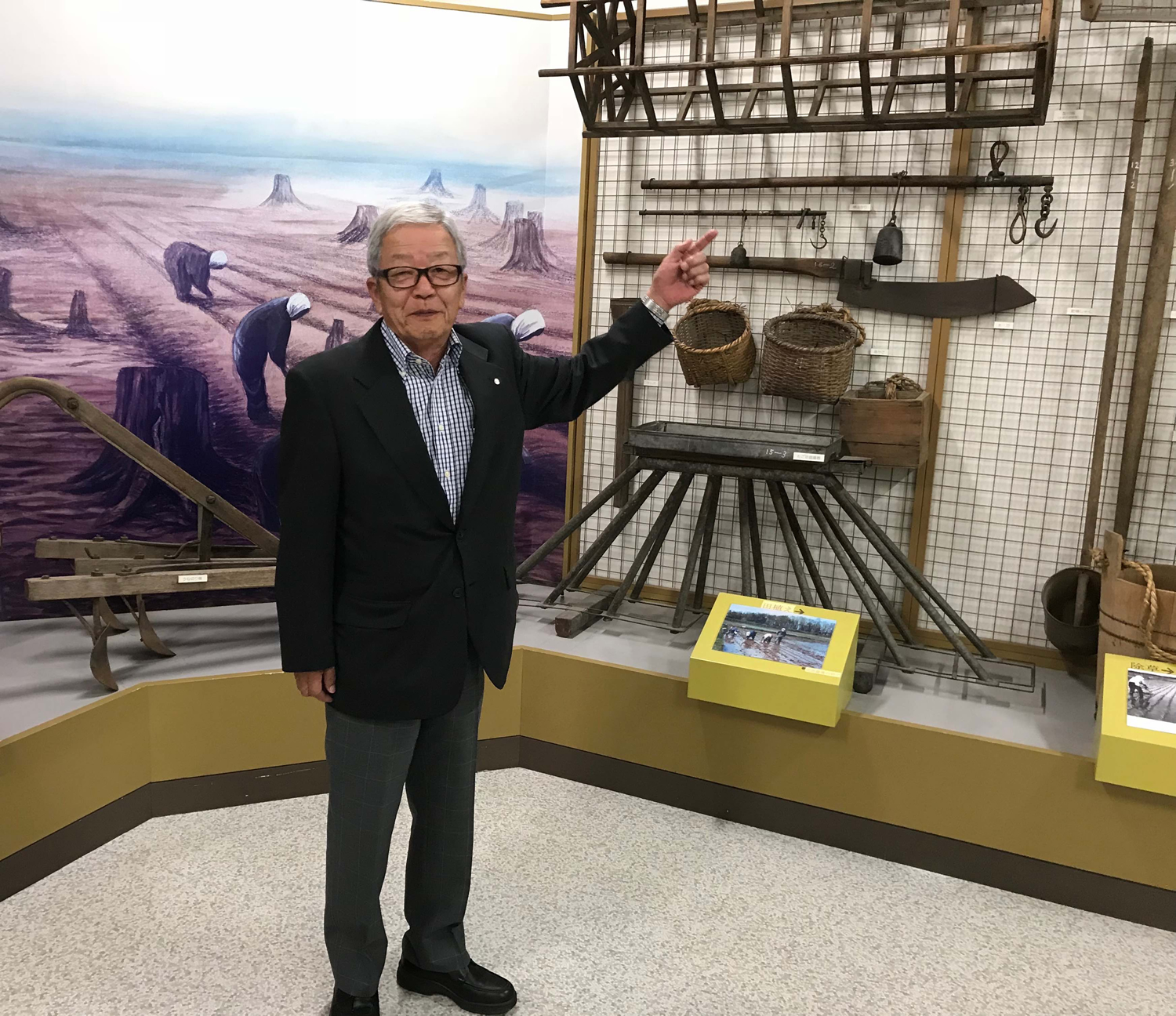 Sakata Fumimasa, a 4th generation descendant of the Tondenhei

Sakata Masharu's son Fumimasa was born in 1943. Following in his father's footsteps, he works to protect and pass on the history and culture of Tonden. Sakata is one of the people who protected the paddy fields of Tonden until the end.
"I gave out pamphlets to people who moved to Tonden to try to get them interested in the history of the land and its pioneers," he said. "As they walked around town, I think, there were many discoveries to be made."

Konan Shrine was and remains a symbol of Tonden, and there is a collection of stone monuments to its west commemorating the Tondenhei and pioneers. The Tonden Windbreak protects people who walk by it throughout the four seasons.
Sakata often remembers the words of his father, who was involved in events to mark the 100th anniversary of the founding of the town. His father had said people in Tonden should become new Tondenhei and work to develop the town with the same strength of spirit of the Tondenhei of the past. 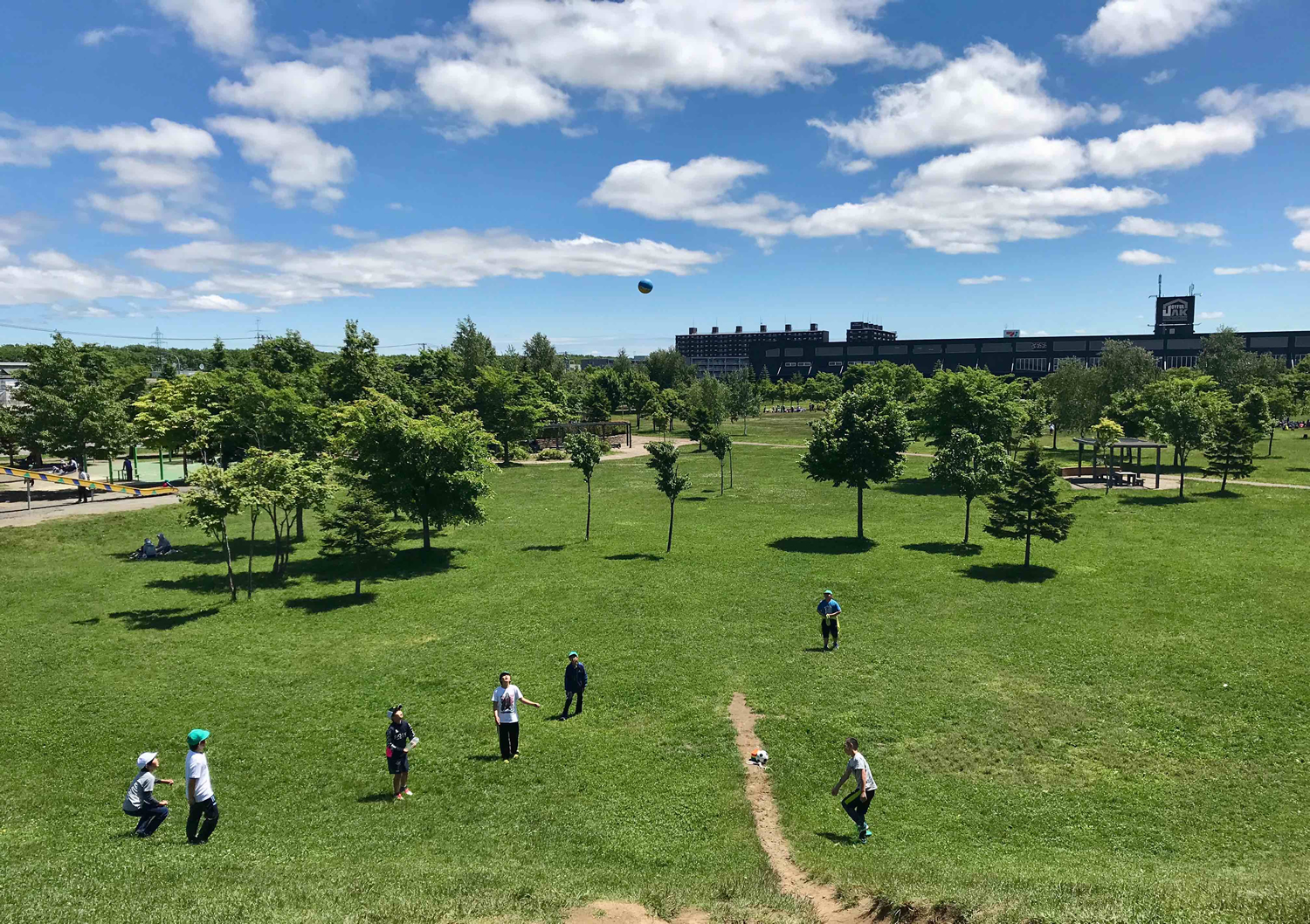 Tonden Park in the center of a residential area